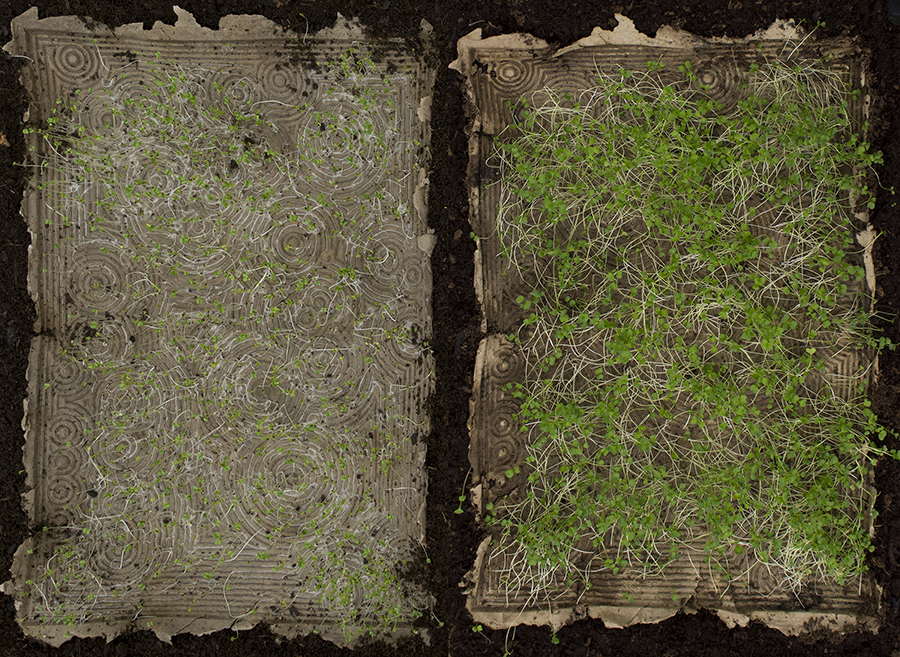 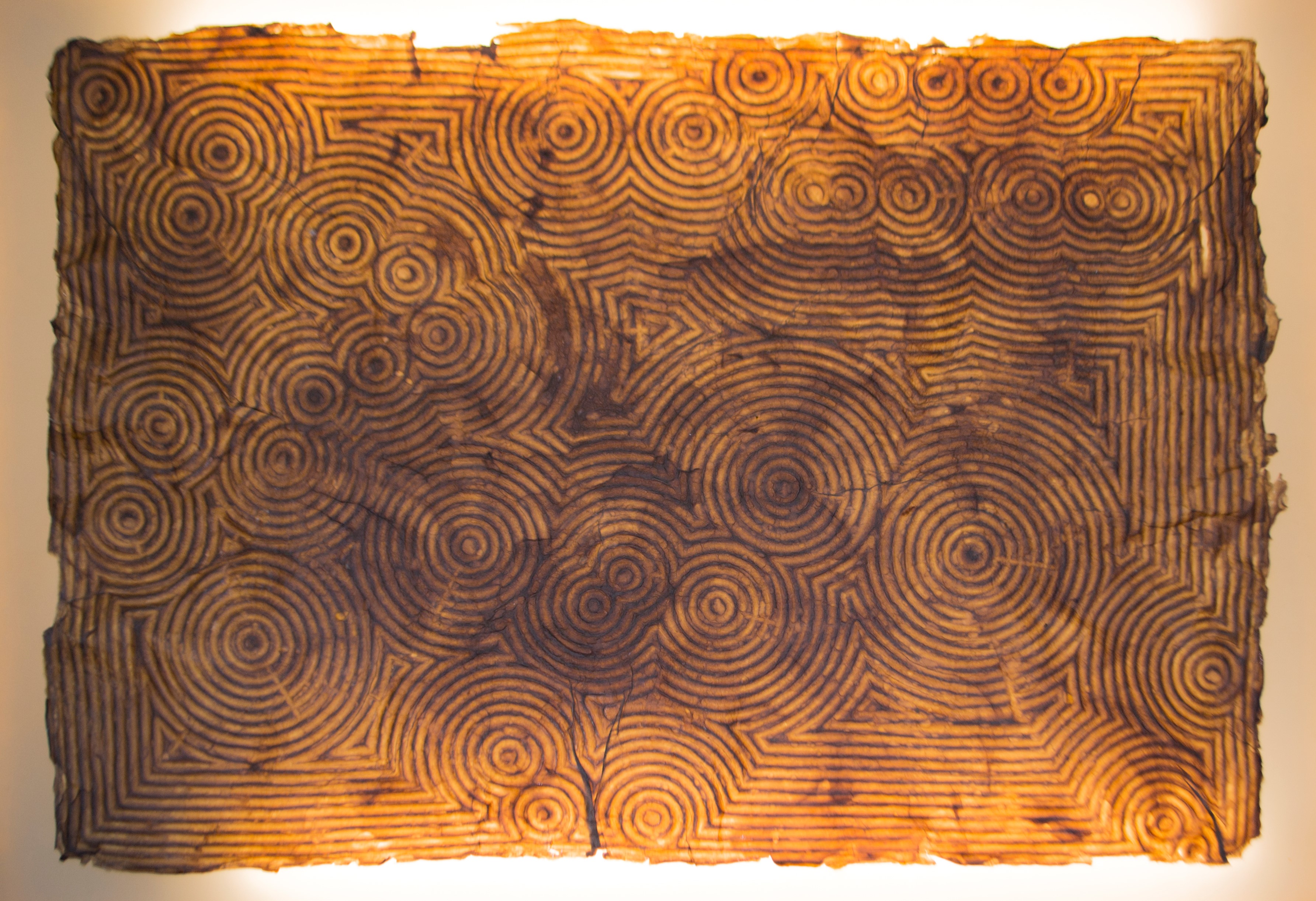 In Patricia Moran’s article,“The Flaw in the Centre”: Writing as Hymenal Rupture in Virginia Woolf’s Work, Moran claims there is a hole in language resulting from fragmented historical representation. Interdisciplinary artist, William Plummer, focuses on the goal to ‘bridge the gap’ within language by mediating dualities in cultural symbols. Plummer’s recent exhibition, Along the Transverse Axis, presents how perspective is formed through language. The viewer is presented with ways in which language is used to build ourselves and our identity, and how we process ourselves and one another.

A Taiwanese phonetic map titled Devices for Personal Orientation: Convergence Plot leans transparently against a white wall. Its mapped patterning appears several times throughout the exhibition. The positioning of points on the map informs another piece made from bacteria and yeast culture titled Echolocation where the points on the surface extend to look like soundwaves. The phonetic map is also patterned into the paper pulp compost growing broccoli sprouts from its composition in Plants know where the sun comes. According to Plummer, “The phonetic map presents the Zhuyin Fuhao transliteration system for Taiwanese Mandarin. While Zhuyin Fuhao was originally established during 1913 in China, it was overruled in the 1950s in favor of the more Westernized Pinyin romanization system. It is now used only in Taiwan and Taiwanese language schools.” Zhuyin Fuhao is the alphabet in which Plummer first learned to read Mandarin Chinese. “I can’t read Mandarin, but can read the phonetic system. Zhuyin Fuhao is a system that Taiwan holds onto.”

It is your aunt choosing to go by a simpler name for it to be no longer mispronounced. It is a way to deviate from a lineage one does not find themselves at home with. Regardless, Plummer’s interests stem from choices in language and its ability to mold perception.

The series of digital prints of Google Images capture the Northwestern point of Toufen where their mother grew up with four older sisters, four brothers, and grandmother. In collecting images, Plummer was surprised at the length of time Google Maps archived, “You can see how a place has changed. People use Google Maps as a way to revisit their childhood homes. There are glitches and distortions that restrict you from seeing the place in its entirety — which relates to memory, as memory is distorted with recollection,” says Plummer. As a universal relationship to place further develops with technology, it opens the question of closing certain gaps. Or when those gaps widen, does it just simply act as a reflection of the human psyche?

Archived internet ephemera is displayed in the exhibition as digital prints in what Plummer titles their Screen Grab Collections. Google Maps became an unfolding technological terrain when it gave way to accessing memories. What is captured in the world that is not universally seen? “I cannot see the faces of individuals, but I can pinpoint my uncle’s work shirt on a clothesline; I could see my aunt’s slippers — the mailbox that they had I remember from when I was little.” With the same glitches, the Google Images capture Plummer’s memory of spending summers in Taiwan. Plummer incorporates a nostalgic audio cassette player with a record of themself reading their writing from Lacuna. The intimacy of poetry and artifact contrast the nonverbal in Plummer’s digital prints. While the screenshots locate us, William’s writing gives us a view behind the initial images in the screenshots with textures and phonetics from Lacuna:

Plummer is calling upon symbols that are commonly used in Western and Taiwanese culture. The symbols become disembodied or dislocated in order to reassign meaning. Symbols such as eye tests in Cohesion Graph, are disrupted with an encrypted message — saying “I am cohesive” while also maintaining that eye charts are sanctioned exams that one takes to measure vision. Plummer’s use of a windsock as a symbol in Devices for Personal Orientation: Inherent Windsock is turned into an expression to define relative direction and speed, depending on the movements of one’s own body as it is constructed from silk organza and a butterfly net. The functionality of a windsock becomes a metaphor for one finding direction intuitively. Influenced by the dynamic of wind, as it carries sound and spatial perception, Plummer notes, “Sound is a physical force, and air is an important physical element. It calls to empty space, which calls to environment.” 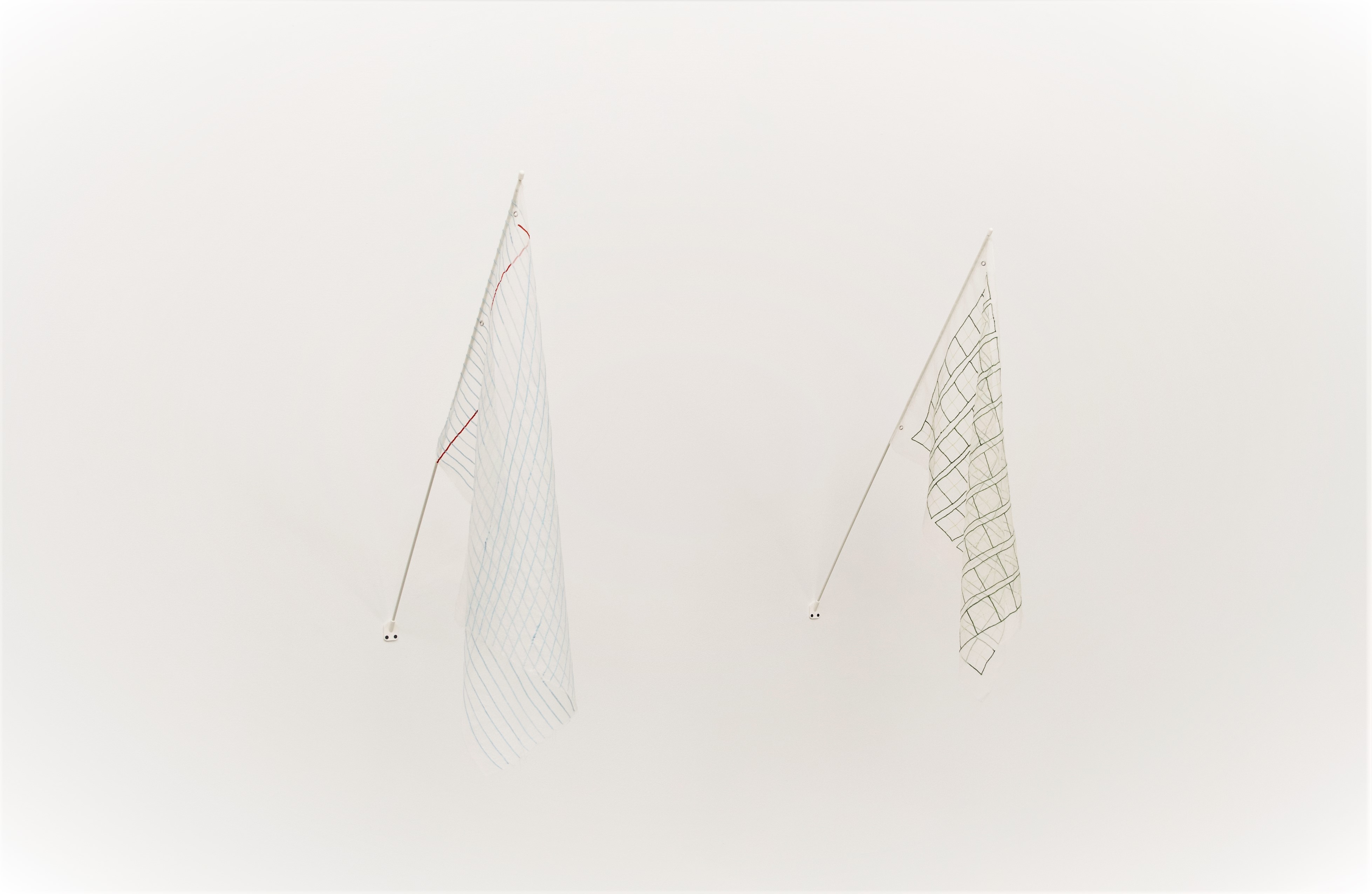 It seems that much of what informs intuition comes from a deep understanding of one’s own past. Diaspora, its effects resonate, much like the soundwaves that the phonetic chart creates in Plummer’s Echolocation. The Flags, titled Devices for Personal Orientation: College Ruled and Devices for Personal Orientation: Tian zi ge are examples of Plummer’s ability to identify and weave dualities, such as traditional American lined paper and traditional Chinese lined paper while maintaining the functionality of a flag, to draw meaning. Taking apart systems to develop a sense of understanding is a tendency of one whom has had to break down one’s initial interpretation of the world. Specifically, the Asian-American experience can produce feelings of guilt and fraudulence in the variations of experiences: first generation not accepting second generation, bilingual not accepting those who are monolingual. Beliefs to leave culture at the door, a family who couldn’t bring the language into the household. 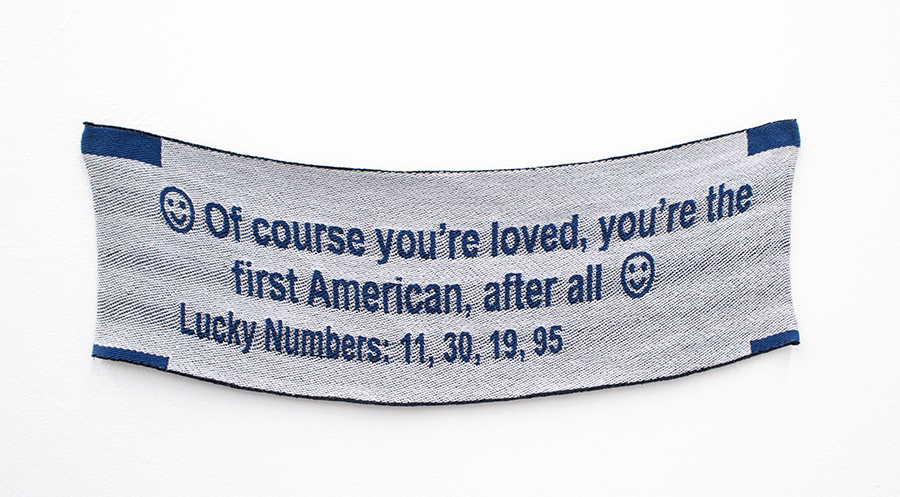 Lucky Numbers: Made in America by William Plummer. Image courtesy of artist.

Embedded in Plummer’s work is a concern with fiber’s history within storytelling and communal making — it is a visual language that was passed down through these means. The processes of fiber in Plummer’s work are used as an allusion to a history that is full, while also fragmented in its representation. ”Language is ultimately a sensory experience, something that requires response, much in the same way fiber moves to bodily response. Fiber is inherently human.”  Plummer’s process translates materials both digitally and through analog processes. Plummer explains, “Something that is inherent in my work is some control is relinquished to a machine, so my hand is not always involved.” The way that the scale and functionality locate the viewer’s body is necessary to its interpretation. Considerations such as these require detailed planning, for which Plummer uses CAD software, 3D modeling, and etching.

Along the Transverse Axis is a portion of Plummer’s commentary as they move to decipher the linguistic implications and dualities of being an Asian-American gender non-binary artist. Plummer graduated from the Kansas City Art Institute on May 5th of this year with a double major in Fiber and Art History.

Along the Transverse Axis, A Solo Exhibition by William Plummer, ran from Friday, April 27 – Friday to May 4, 2018. Visit their website at www.poillywoig.com