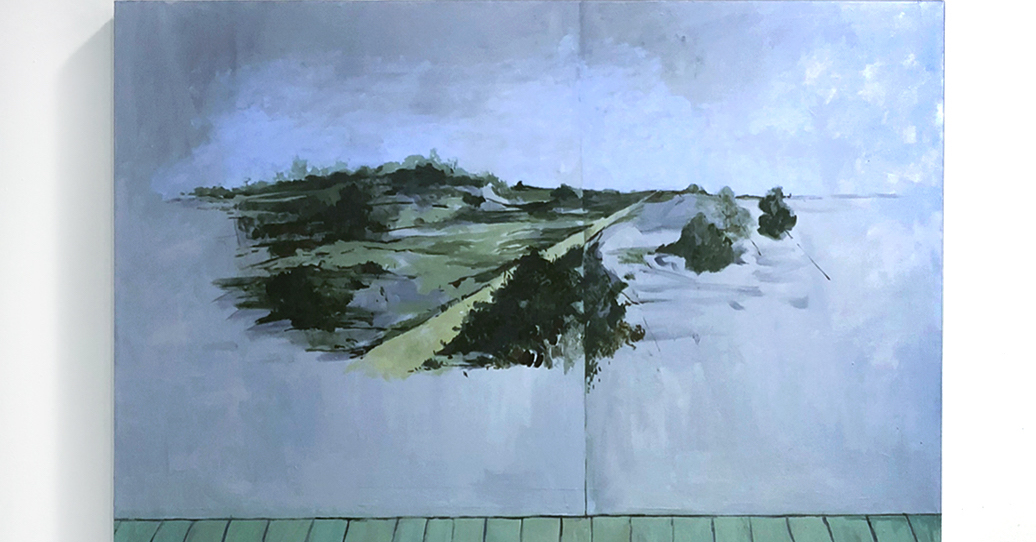 The Melancholic Journey: Misha Kligman’s Toward An Unknown Sky

The paintings of Misha Kligman are informed by his response to nature, family and his immigration from Russia at age 16, however, in this sixth solo show at the Studios, Inc his past personal exploration on the ineffable qualities of place and memory are now focused on a presentiment vision of the future.

If Kligman’s paintings are, as he says, “rooted in the landscape as a site of a journey,” it would begin with this interior of a room titled The Door. In it a landscape is levitated above the studio floorboards creating a portal into the outside world. It shows a benign roadway crossing the hillside and although it doesn’t seem to beckon us, as if in a dream, it does draw us in. So, Toward An Unknown Sky begins with a poetic, cinematic device reminiscent of a Andrei Tarkovsky film, speaking an illusionary language that reminds us that each painting must also be seen as stagecraft. This distanciation is reinforced by the scale and character of Kligman’s handwriting the title of each piece below it, much like in a child’s picture book or family album, to tell the story of the images.

When asked, Kligman does not give symbolic interpretations of his work, yet swans and geese have long been worshipped since the Neolithic age. Northern Russian arts and crafts are full of their images appearing on women’s headdresses and costumes and on houses, spinning wheels and harnesses. Perhaps Kligman invokes them in Silence to ward off impending danger and to confirm and attribute power to the ancient tradition of using images of love, marriage and family to protect and preserve us. The poignancy of the mated geese couple viewing the ominous clouds on the horizon is like a Bach Sarabande that summons an aesthetic emotion albeit with silence. This dark, defused seascape speaks to the close relationship between the melancholic and the beautiful. Melancholy’s reflective experience is often felt through solitary contemplation of nature from a safe, distanced point of view–what Kant spoke of as the sublime. What we experience in front of Kligman’s paintings is similar–when emotions verging on fear are combined with the pleasure of wonder and respect.

A circle of unextinguished flames seemingly float on water and surround a solo goose in The Unburned.The background field of blue reveals the gestures of brushes and the drips of paint that are less about water and more about a particular ambiguous space to which we attempt to associate meaning. Should it be compared to a Russian fairytale where the fire essence of birds is believed to see the future and can bring both good fortune but also doom? Such a literary solution lacks a more transcendental meaning the painting seems to suggest.

The ancient Greeks proposed that the entire world was composed of five basic elements; fire, water, air, earth and spirit to enable us to grasp what was overwhelming and incomprehensible. Similarly, Kligman reduces his own narrative elements in order for us to see beyond their primary forms and forces­ – the dialectic between the family as both a strength and a vulnerability, and the landscape as familiar yet threatening.

Kligman speaks of seeing his own young son in a photo of a drowned Syrian refugee child who had washed ashore on a beach in Turkey, and felt that all children are equally at risk. Father to two young children, Kligman knows he too must soon walk out into the dangers of the world with them. This response to the exiled informs his paintings with a foreboding while exposing the viewer to their vulnerability, which must share in the suffering of others.

Often Kligman’s shadowed color palette alienates viewers from wanting to bear witness to his paintings, but his sense of light is integral to the narrative of his subjects. In his past works fragmented parts of bodies are prominent; a dangling arm, a close-up on a foot or leg or objects of transport; such as rafts, staircases and bridges combined to disorient and form an often threatening environment. In these new works, the elements have a cohesive interdependency between people and place.

Whether it be in the parent and child’s embrace, barely defined from its chaotic surroundings as in The Dream, or in The Passenger, where the limbs of the figures become one in the same, they speak to an apprehension of one’s own mortality accompanying parenthood, and to the perilous nature of living in the world.

The life-size portrait of a family standing on the precipice in The Departed, facing away toward bands of color, as if looking into a spiritual painting by Rothko. Drips on the mother and children link them to this painted place out of which they are formed and when we stand before the painting we share their viewpoint of departing on a journey.

Kligman acknowledges that his work is indebted to and guided by a particular lineage that is both apparent, e.g. Albert Pinkham Ryder and Anselm Keifer, and surprising; Brice Marden and Agnes Martin, but it is to Enrique Martinez Celaya that he credits with allowing him to be a painter. A Cuban exile, Celaya’s work questions assumptions about archetypes and uses familiar and accessible images to access what lies beneath them. Kligman’s own work reflects this same sensibility of using images that we commonly hold dear to reveal his premonitions of the future that elicit both awe and fear.