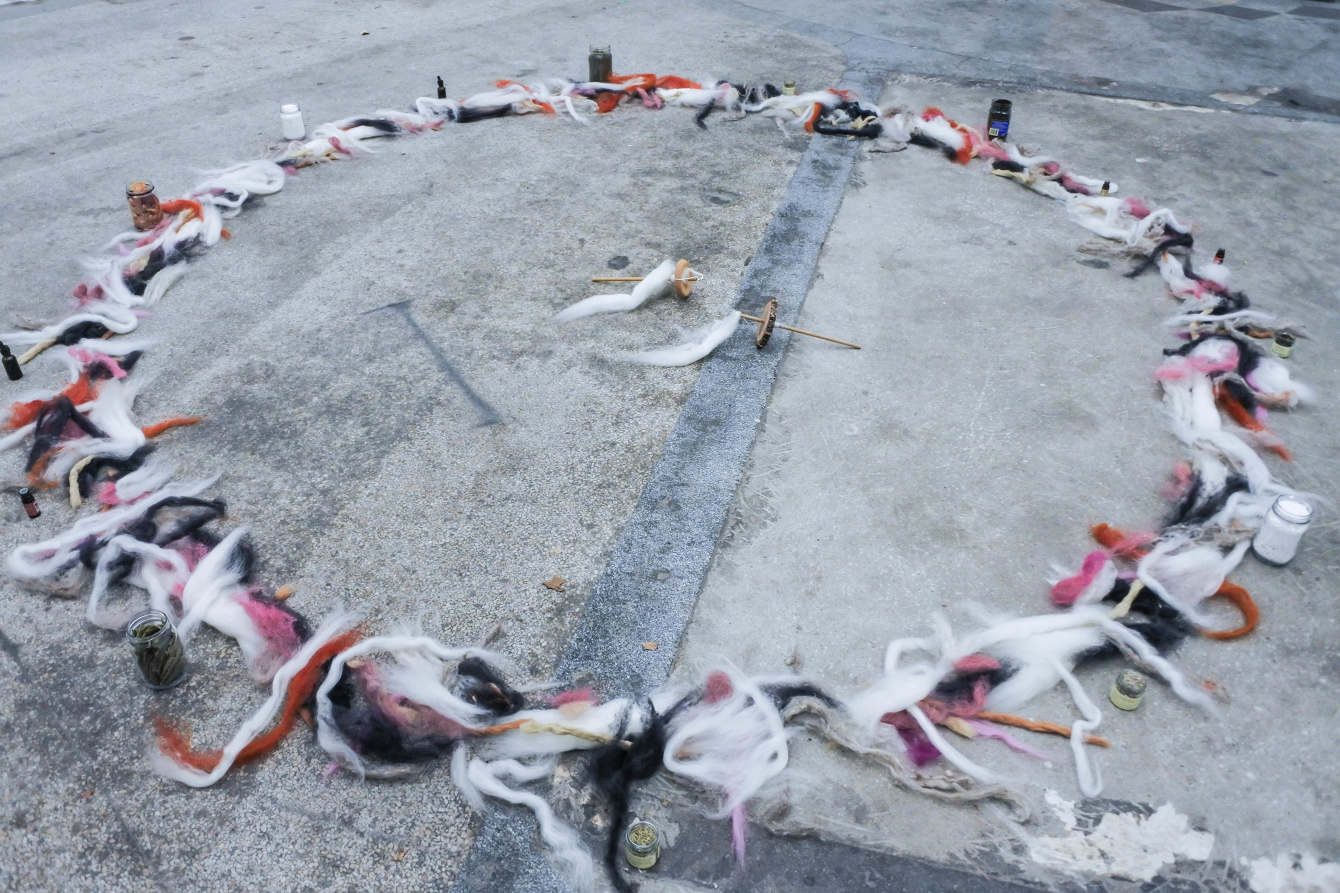 This piece was part of Part of FLESH CRISIS: Pop Up Performance Series at The Drugstore Thursday, January 19, at 7 PM – 9 PM

Everyone was clumped in groups around the periphery of the Drugstore’s front gallery. The mood was jovial, except for a ritual-like circle of woo in the middle of the space where no one dared to stand, as if it was a cursed or holy ground. Between the multi-colored tufts, there were spice jars, containing what appeared to be herbs, onion skins, smelling salts, dirt, and some unidentifiable natural materials. This stage for the impending performance kept the audience holding up both walls.

During this pop-up performance series, several performances took place simultaneously, including works by Christina Silvius and Wolfgang Bucher. Musical artists Valerie Kuehne and the Wasps Nests performed, as did King of Herrings. These layered performances brought its own level of energy that wound up impacting the intensity of one another. I particularly connected with Goo Witch’s piece, her Cord Spinning performance and practice as a whole.

Two people dressed entirely in black entered the circle. They began spinning the wool into yarn on handheld spindles made with a slice of tree bark. The artist, the Goo Witch (Shelby Burchett) began speaking in a calm, even voice, “We are making a spell. Grab some materials and we will spin it into yarn.” The rest of the piece was silent.

Glancing uneasily at one another, we hoped someone would make the first move. Someone did step forward, and the crowd soon began carefully treading nearer the circle, in reverent fashion. We crushed onion skins and lay them in the wool, presenting a crackling sound and a bitter smell you could almost taste. Someone put what looked like salt in the wool. As more people participated, the spell’s ingredients created an intoxicating scent, sharp and bitter at first, then sweet. My head rang, and I felt lightheaded, reminding me of incense used to create an augmented spiritual state.

Watching the artists spin became hypnotic. As more people engaged the work, the scents and smells intensified, and we all became part of this ritual. The audience interaction played an important role, keeping the performance from becoming overly precious and inaccessible.

Researching Burchett’s work, I discovered her choice of materials for this event made sense. She used animal fibers, plant matter, and human hair, all natural materials linking her rituals to the earth. However, I had a hard time uncovering meaning from the ritual’s spice jars. Their uses were not readily clear. Perhaps the artist intended to preserve some mystery and labels might make things too literal. However, any symbolic meaning of the onion skins and herbs needed to be read in that moment. Keeping information intentionally obscure does ask the audience to take a leap of faith, but this point is where audience ought to rely upon her expertise.

Cord spinning is a very old form of magic where chords are braided while concentrating on a desired end. Burchett’s spell focused on “positive and radical change, inclusion, and feminine power.” Printed pamphlets that explained her spiritual practices and detailed the materials’ symbolism were placed on tables at the back of the room. They were very helpful in understanding the symbolic ritual of Burchett’s piece, but their placement was not optimal. The audience would have been better served if she had them either consult the handouts first or place them in closer proximity to her wool circle.  So, while we were asked to place trust in Goo Witch that her rituals would resolve the questions she presented, we were also reliant upon these handouts for exposition.

Meeting in my studio, Burchett described art as “the act of making something that needs to be shown.” Historically, she has focused on time-based installation work, such as her Goo Corridor, but this was the first piece she expressly labeled as performance. “I realized I needed to be making performance work when I was working toward my MFA,” Burchett explained, “when all my time based work required me to be physically present and interacting with the piece.”

Burchett also explores the mythology and Magick rooted in textile crafts, relating her role of female maker to spiritual femininity and the making of one’s own alchemy.  Magick is another word for spiritual power, a force of nature like gravity. There are different views as to whether or not Magick violates the laws of nature, or is a law we cannot yet explain scientifically. Witchcraft is highly personal, and often requires devotion to research, meditation, along with trial and error to discover what works best for each witch. This is a spiritual practice about harnessing the power inside of a person to influence the world around them. Witchcraft exalts women, says Burchett, and is structured towards equality as a fluid system of beliefs. Burchett’s interest in femininity came through by employing two femme-presenting people as performers, and by titling herself “witch,” a traditionally female-gendered term.

Growing up, Burchett began to find power in the feminine while struggling with her own identity and this strengthened her spirituality. Magick offers women power where other systems or entities fall short, thus, witches are not stuck in the patriarchy of Western ideals. Magick upsets the notion that women are subordinate to men, and actually asserts that femininity has its own unique strength. Historically, female witches or those perceived as witches have been persecuted for their beliefs, even killed because of them.  Shelby uses textiles processes once dismissed as “women’s work” as a source of power, combining them with Magick, which draws on the energy of her feminine spirit. Is seems possible that the reason female witches were and still are seen as threatening is because of how they embrace their feminine power, which dismantles the status quo.

Burchett and I openly discussed our own spiritual experiences and ideas of a higher power. I could feel the energy exchanged between us as two spiritual women, and felt respected and validated by Burchett. It was surprising how similar some of our spiritual experiences had been. As a devout Christian who in some ways rejects my traditional “religious” upbringing, I could relate to Burchett’s experience of growing up “very Christian.” She explained that her spirituality didn’t go away, but eventually found her place in Magick. Though we didn’t always see eye-to-eye on this subject, I found comfort in a shared passion for our beliefs. Our traditions look very different, but we both felt the presence of a holy force, one she felt was divinely feminine. Whether we call it the Holy Spirit or Goddess, I knew we were both chasing the same thing.