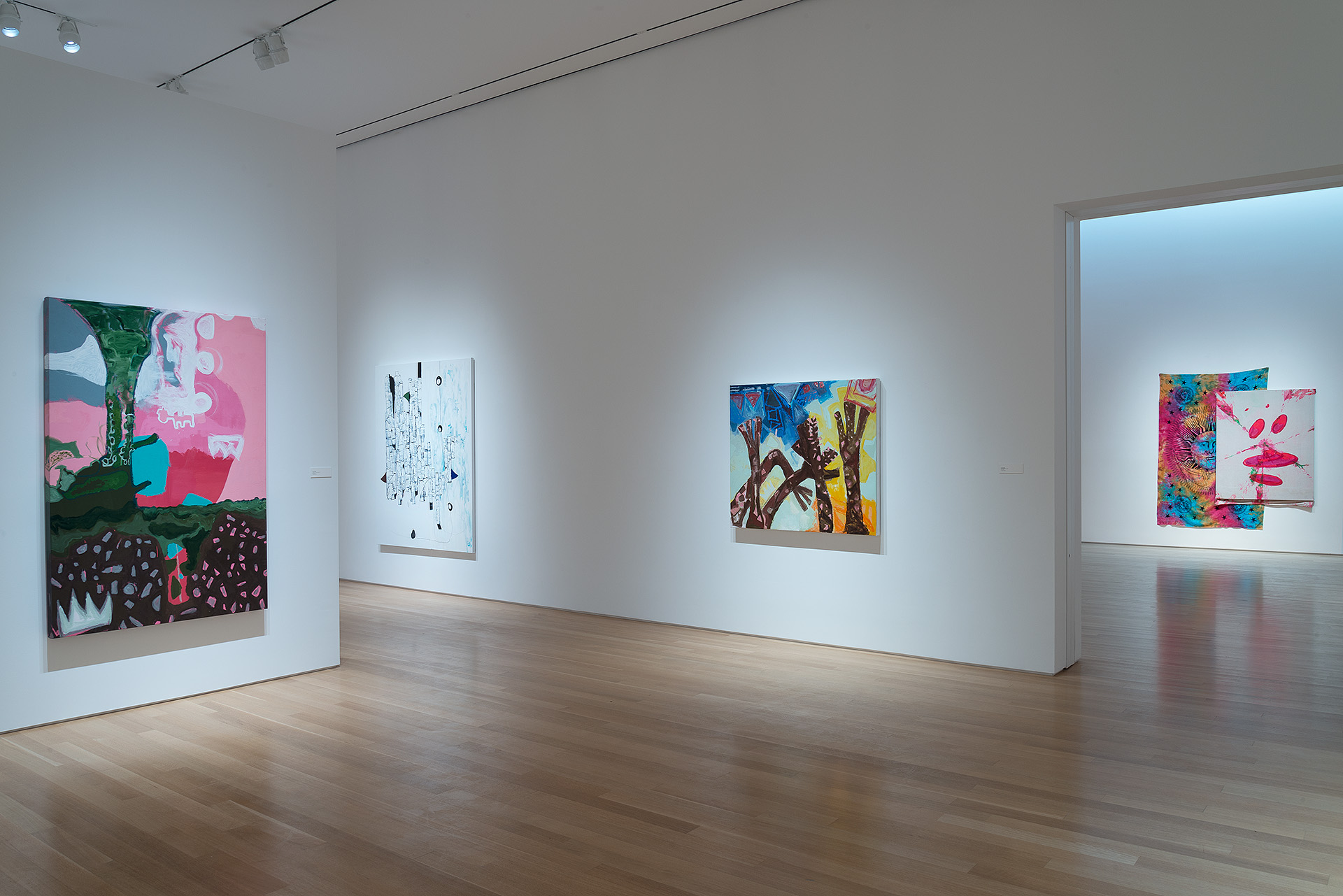 A State of Capitalist Paralysis at Nerman MoCA

Anxious Abstraction at Nerman MoCA opens doors of perception to our anxieties in a culture already fraught with tension. The work invites scholarship and cynicism that offers an understanding the patriarchy is undergoing a shift in management and it is time to rethink our ideas of ownership.

Conceptual ideas regarding the pursuit of acquisition are somewhat unbalanced when these ideas are represented by five white men and one woman of color (Justin Beachler, James Brinsfield, Paul Cowan, Chris Daharsh, Cristina Muñiz and Jered Sprecher). Viewed in this context you can see the striking nuances of privilege.

Painter Cristina Muñiz bears a particular burden with regards to her subject matter, which is about the desires of ownership alongside the broken promises of the American Dream versus the other artists concerns with negotiating spaces already in their possession. Citing Muñiz’ If You Got the Money Honey (2018) versus Sprecher’s 8.25 Minutes (2017) and Beachler’s Lambskin/Lilith (2016) are particular examples. Therein brings a profound difference to the quality of consciousness between each artist and their work; whether they are more active or merely contemplative is a measure of one’s advantages, both perceived and actual. 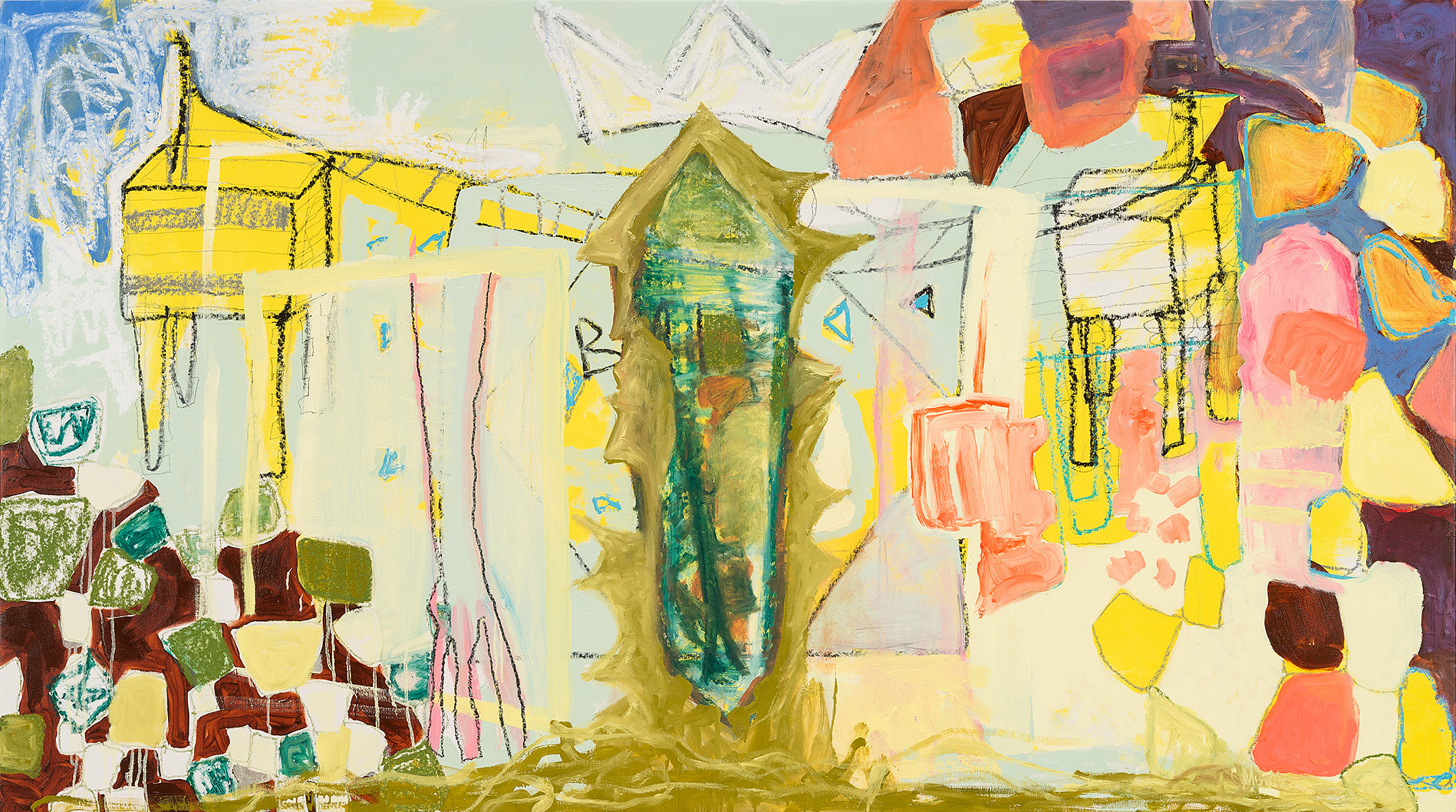 Cristina Muñiz, If You Got the Money Honey, 2018, Oil on canvas,
Courtesy the Artist. Photo by EG Schempf

Chris Daharsh’s freestanding paintings appear as abandoned doors or windows to a once grand, now decayed, idea. His Fence I, Fence II, Prosopon (all 2018) are a betrayal of the utopian promises that were sold to post-War America in a Robert Moses-sized lie. Specifically in the American suburbs, these are examples of the ways in which the master builder’s (Ayn) Rand-ian ideas fed off the already stress-induced anxieties of white flight. Daharsh’s promulgated degenerate structures smartly depict that decline, resulting from an inability to preserve and persevere over relentlessly tearing down.

The ongoing work of Justin Beachler reaches a formidable conclusion here. As America’s great social experiment of the 1960’s culminates in a failure of the Age of Aquarius, the once hopeful flower children are now dismayed seniors wondering how their beliefs and symbols of change have been co-opted into bloated consumerism. Beachler’s deconstructed early head shop concept has further evolved psychologically towards painted rugs (Large Grey Formal/Nahema, 2016) and tie-dyed wall hangings (Void Celestial/Choronzon the Pit, 2016) to recall these former hippies once turned their backs on advertising and its phony sales pitch. Following this thought, photographer Nan Goldin said recently, “To my mind, people have become so conservative, especially the millennials – it’s like the 1960s never happened…” 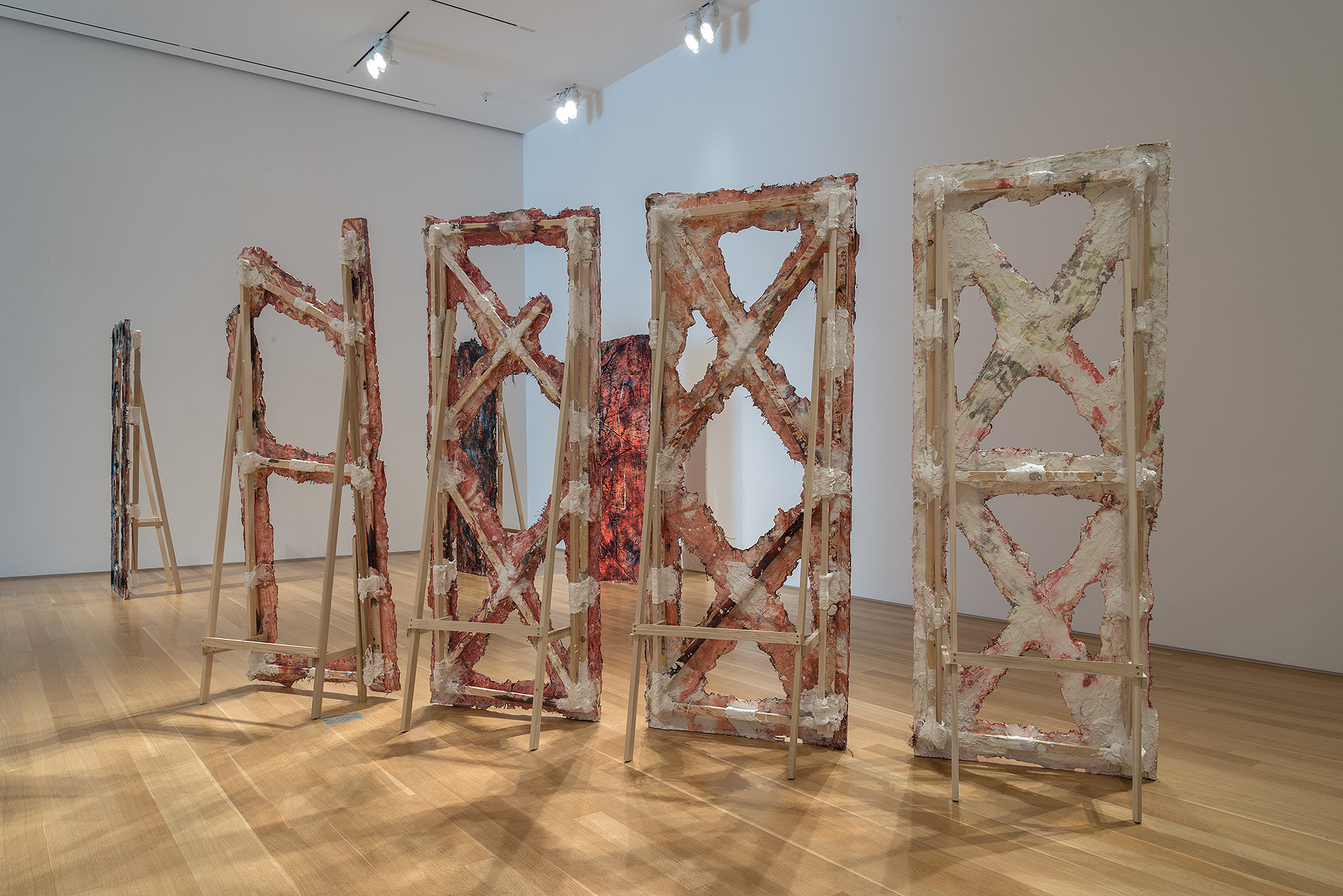 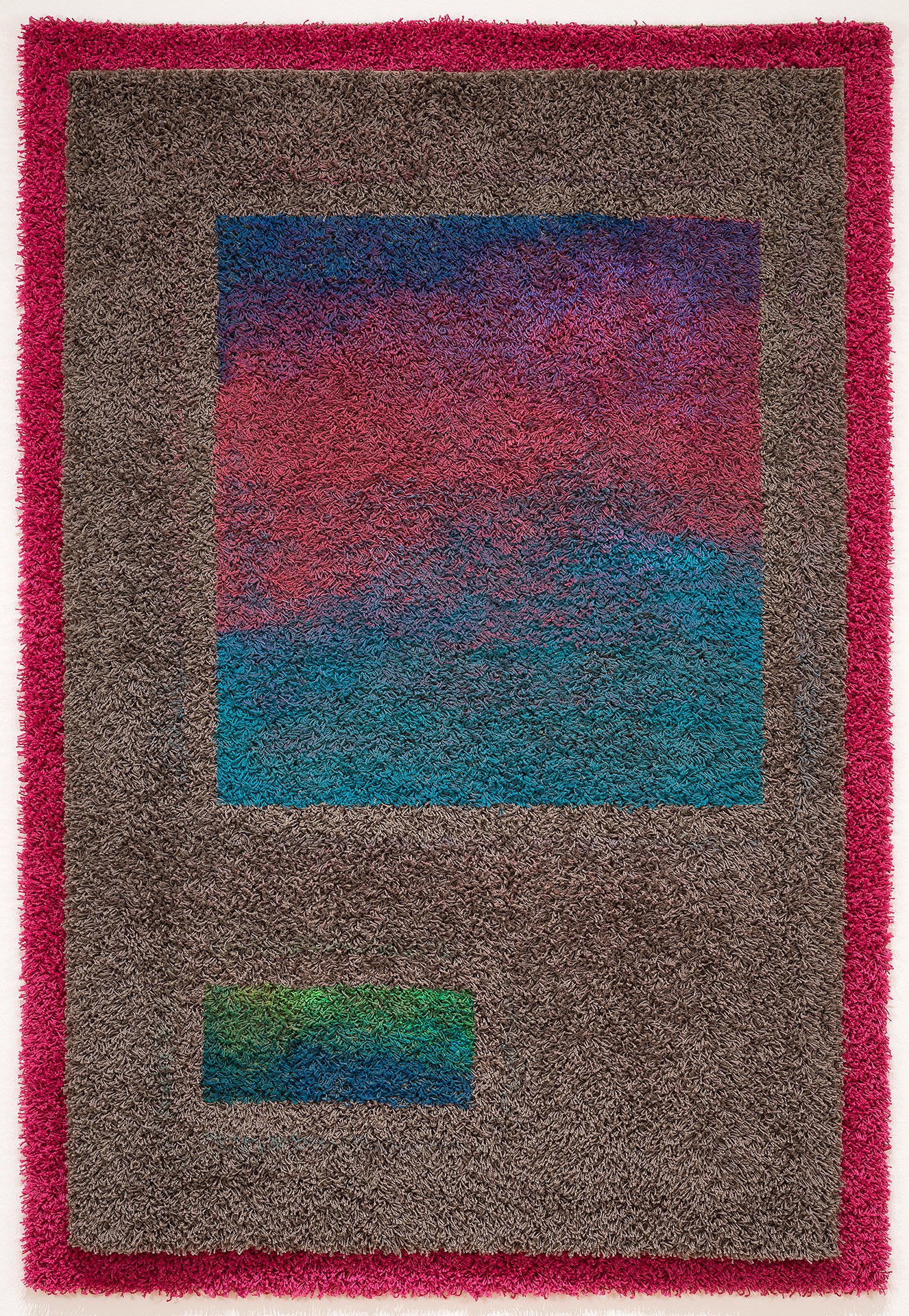 A series of pun-laden works of fabric on stretchers to look like paintings from Paul Cowan are far too surface-driven to be considered topical. Color Field monochrome canvases embedded with fishing lures imply, “…the paintings are the lure. Cowan reels us in to consider the perils of the present moment.” Surprisingly, all are named Untitled (2015), rather than Bait and Switch to further ensure his point is driven home. Cowan would better serve the intended philosophy of this exhibition if he presented these as solid fields of color with no adornment whatsoever. That might evince a discussion concerning the anxieties of Minimalism as a trope against the chaotic cycles of media, politics and economics. But it takes guts to make that bold a statement. Instead, Cowan appears to mock the long maligned working-class Americans; the people who keep his car running and his food refrigerated, with the embedding of fishing lures veiled as high-reaching post-Capitalist Abstraction.

There is a strong statement of the Haves versus the Have Nots in which Jered Sprecher successfully conveys, ‘you will never enjoy your comforts’. As seen by 8.25 Minutes (2017), there aren’t strong enough passwords or high enough walls to ever put you at ease. His installation of tropical neon-flush canvases suspended from both floor and ceiling are also close enough so however you turn, the unsettling experience of being watched is always with you. Furthering that paranoia, a plush grey carpet anchors the installation to lull you into cozy complacency. Sprecher’s rug is meant to be chic, an accessory to wealth and comfort. Whereas Beachler’s rug (Large Grey Formal/Nahema, 2016) says anyone with sixty bucks and directions to IKEA can have this, illuminating the ongoing false assurances seen throughout this exhibition.

To absorb these individual artists as a whole, it can be discerned Anxious Abstraction is pooled information about experiences, but not about the experience itself.  Unfulfilled promises are seen as thresholds of revelation. However, we continue holding onto a fear of answered prayers as a rudder for the anxiety of what actual change may bring. 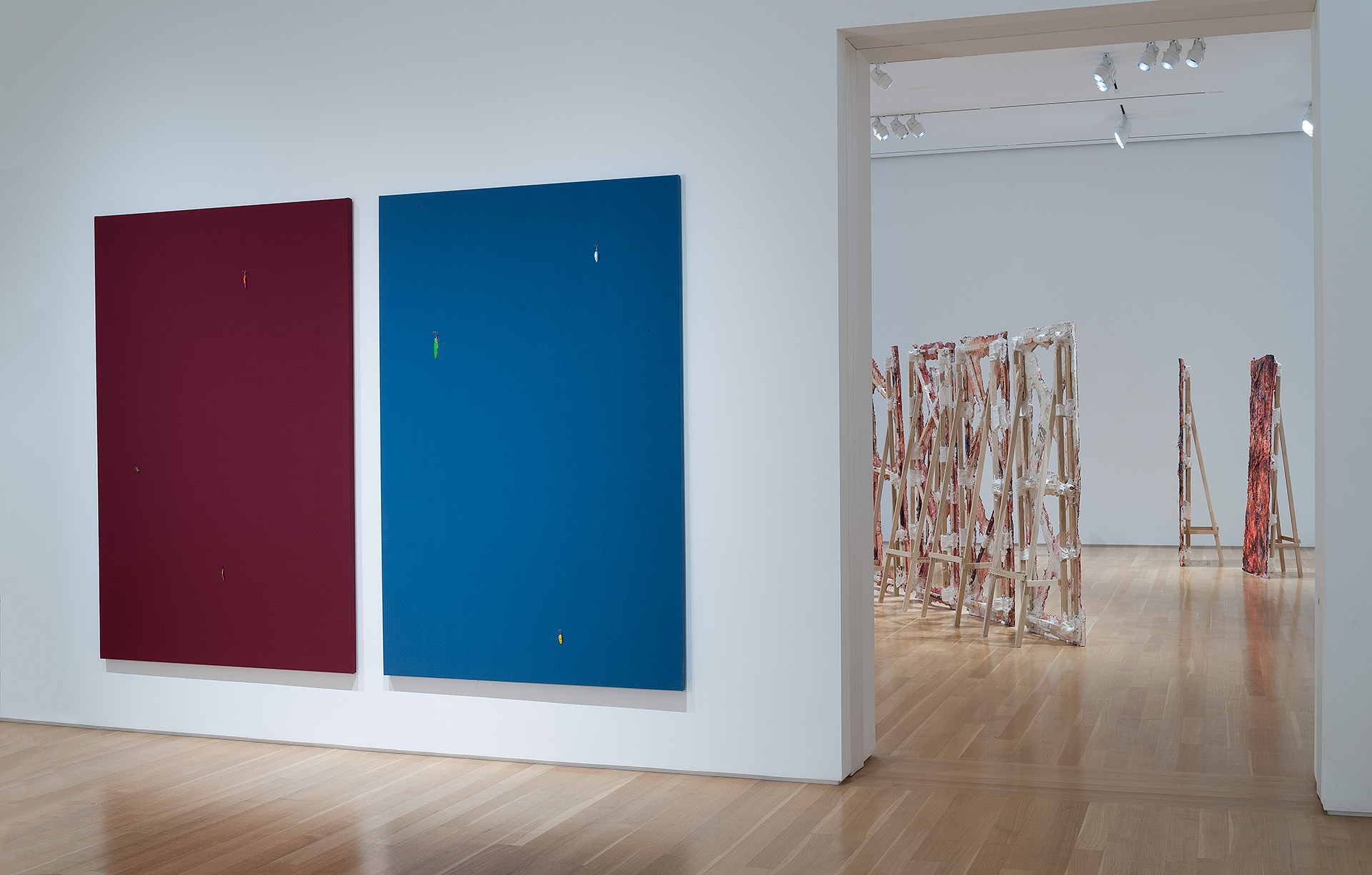 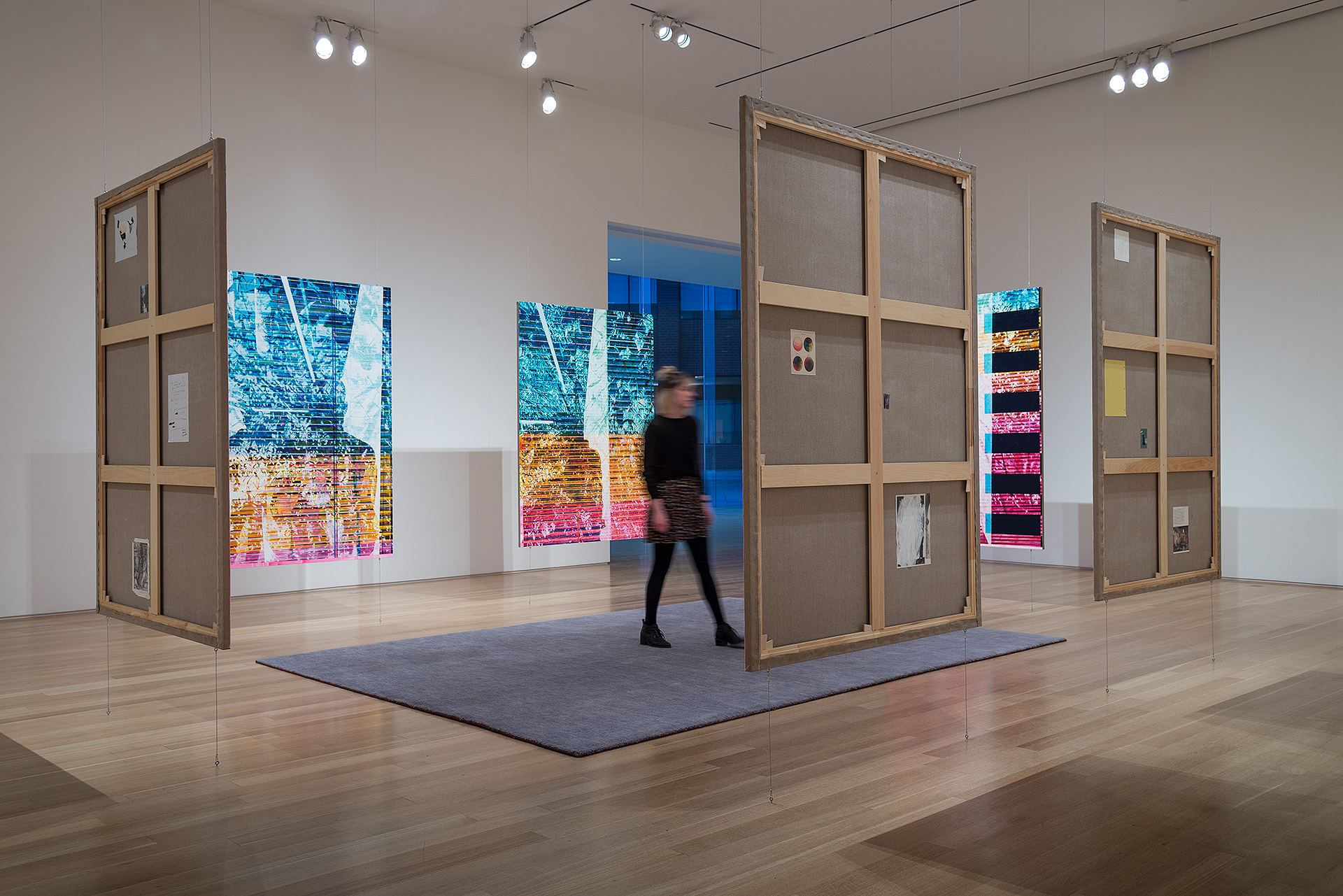