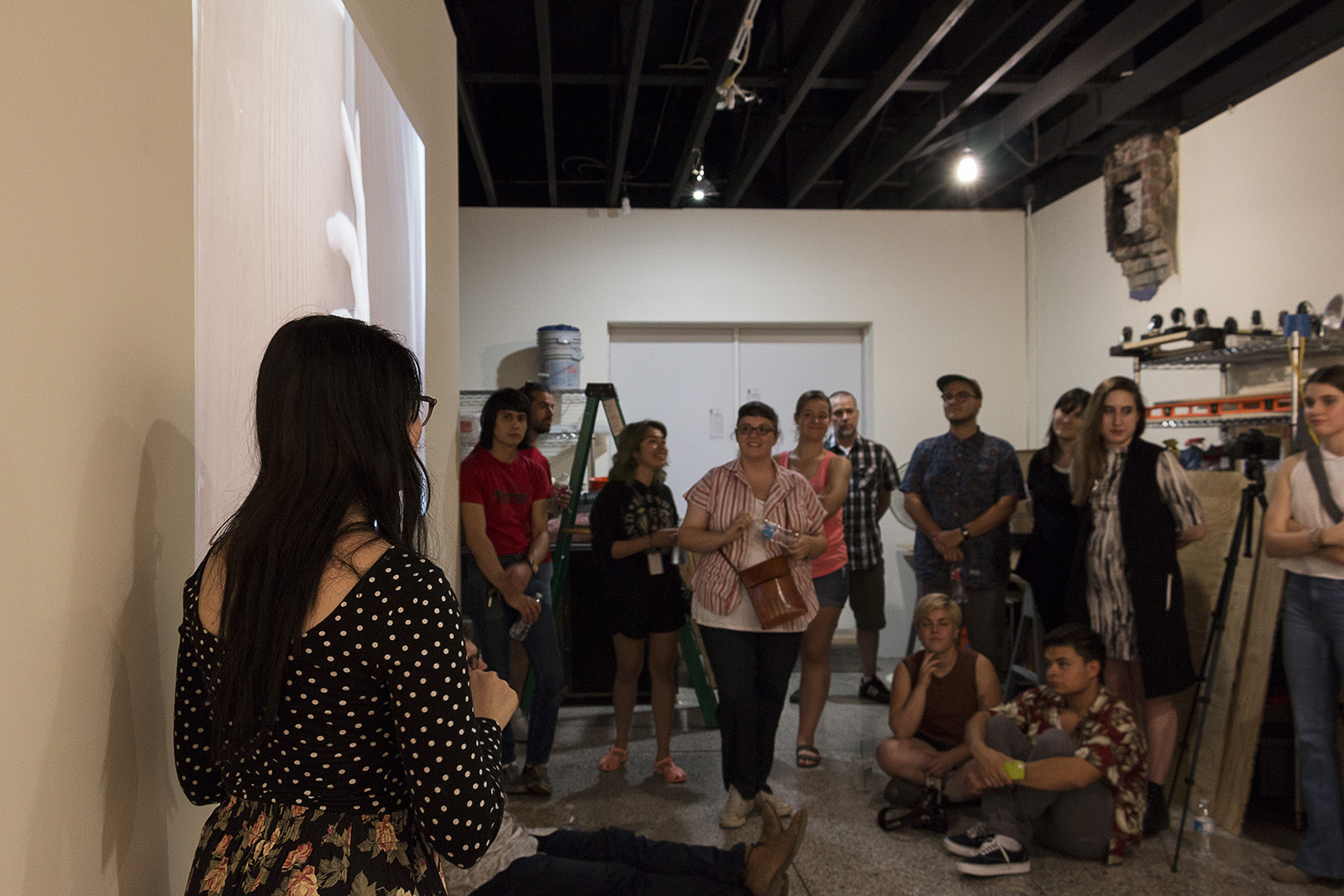 An Archive of Crit Night with Archive Collective

Archive Collective hosted their fifth Crit Night at Kiosk Gallery on Thursday September 3, 2015. This Crit Night was for the artists to get feedback on works in progress and in this way, see what is working and what needs to be reassessed. There was a larger turnout than was expected, making for a slightly crowded and very warm environment. Despite that, there was a good atmosphere geared towards critique within the framework of photography. 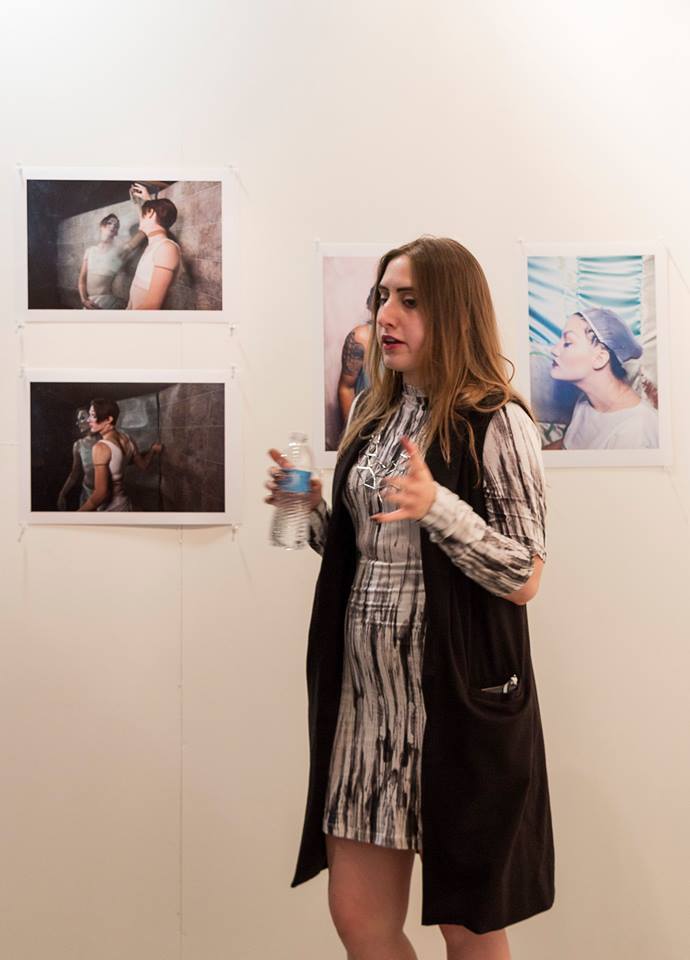 Kat Richards, printmaking senior at KU, presented her work as primarily dealing with the drag culture, virtual presence, and identity. Although there were some elements that were working, there was much room for improvement. One issue with the photographs was the language she used to describe her concepts. Many of the words she used were problematic towards the queer/ drag community. Not only was she using models who are not part of drag culture, but she also put herself in drag, using it as a costume. Participants in the critique thought Richards was not taking into consideration the potentially negative implications of this type of portrayal. Her lack of research in conceptual approach ended up opening different discussions she was not prepared to address. This was a large topic of discussion for the overall body of work.

Richards use of photography -in technical terms-was problematic.  the works presented were decent, well lit, subjects in focus, but the glossy finish on the prints reflected the overhead lights. The colors she chose for the background of the two gender centric studio portraits – pink and blue – were an obvious choice and did nothing to for her already questionable concepts. To be fair, she was attempting to achieve the cinematic. The audience discussion was largely about problematic ideas on gender identity. One of the attendees, Donut, commented on how Richards’ idea of what the work was about did not come across because of how directly they mimicked aesthetics the queer community. It seemed to be that Richards had not taken into consideration many of the points that were brought up so hopefully this critique works to her favor moving forward.

This critique could have been better balanced between the two bodies of work and spent more time discussing the photographs that dealt more with value within the virtual realm and strange object phenomena. These seemed to have potential for further exploration. Her use of color and the objects within her constructed spaces alluded internet culture and virtual space and presence. Whether intentional or not, certain objects she included were referential to American culture as well and I felt that could compliment her other interests well also, given she researches more in depth. 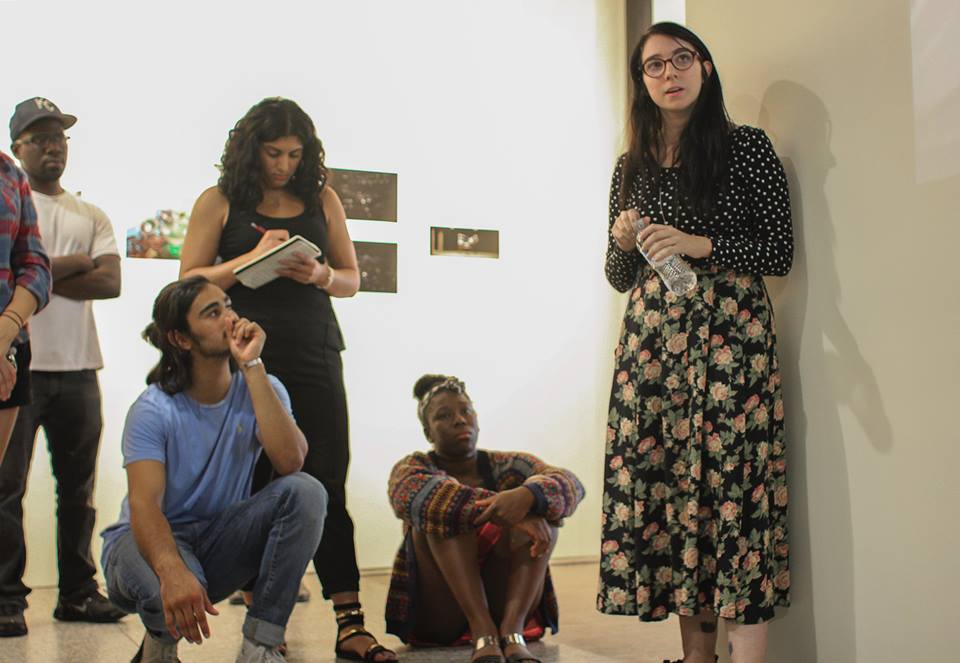 Second to present was Emma Provin, who was projecting a short film. Her piece, Agnes Cannibale, featured Agnes, whose body is having a negative reaction to the human meat she has been ingesting. Strong female lead characters are not often seen within the context of the horror genre. Provin managed to use this atypical narrative through execution.  The film was shot and edited handsomely; the framing throughout the entire length was consistent in its intentions and correlated nicely with the overall concept. The tension built by not seeing Agnes’ face, and instead just her hand gestures, kept the audience engaged with the character. At the end, this payed off by finally revealing an entirely different dimension of self mutilation. Overall, the environment Provin created was appealing and counterbalanced the grotesque implications.

The conversation revolved a lot around the main character and her persona. The one point that was discussed, a bit too extensively, was the sound throughout the film. Fellow Crit Night participants felt the sound was too low, even when scenes were functioning properly silent. The music also surfaced comments on the time setting and the contrast between the chosen aesthetics of Agnes’ old fashioned space and her modern objects. This played into the conversation surrounding her persona and the way in which the juxtaposing of these two served as a way to confirm assumptions made by the audience about the character. 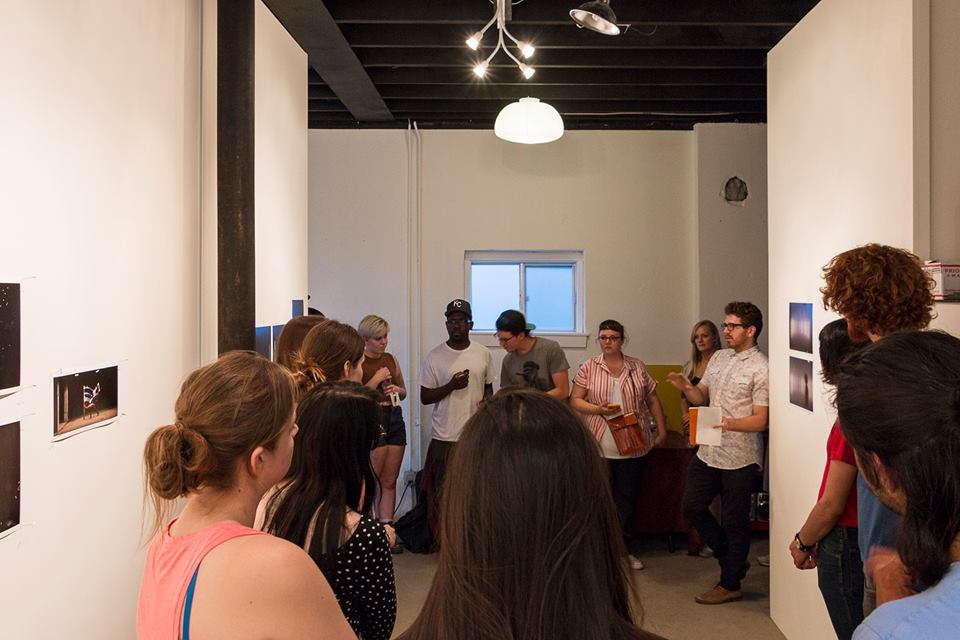 Last to present work was Dustin Downey. Primarily an installation based artist, Downey showed photographs that were meant to serve as documentation of installations. His work explores the relationship between light, space, and form. However, instead of providing the viewer with simulation of those installations they left much to be uncovered. That physical presence of light in space was unfortunately not translated through the photographs. Many of the prints were too dark, abstracting the space from the image entirely. Downey’s documentation of his installations seemed to be referencing Dan Flavin’s fluorescent works in the way the light source is supposed interact with the space. Flavin’s documentation of his installations can double as artwork themselves because they consider the medium they are being translated through instead of simulating the experience. Downey’s work did not evoke any sense of presence or spatial depth instead the contrast ratio of the photos made the spaces ambiguous.

By the end of the night, all three artists were able to hear the reception of their work from a small but diverse audience. Each artist received constructive suggestions for ways to improve or reevaluate the directions of their work.