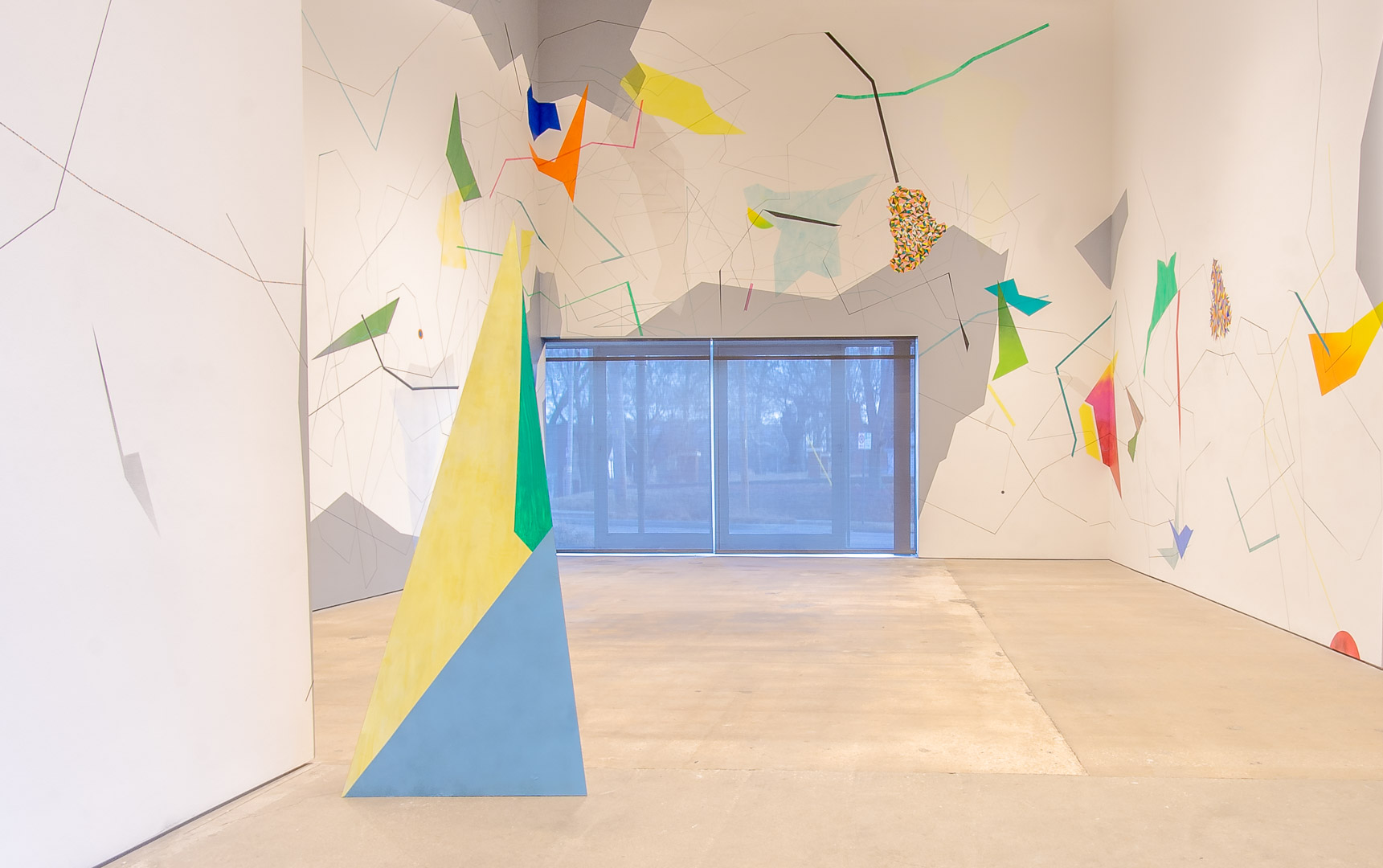 An Exhibition Performed: on Collaboration with Dannielle Tegeder

Currently on view at the H&R Block Artspace is artist Dannielle Tegeder’s (New York,NY) exhibition, Chroma Machine Suite: Forecasting Fault Lines in the Cosmos. Tegeder heavily incorporates collaboration into her installations with the aim of creating a conversation that considers the expanded field of painting, hybridized with community building. This exhibition was performed; it was choreographed and staged.

I was a part of this community she built for Kansas City — on a crew of 14 students selected to work on this burst of an installation; a total of four days that transformed the entirety of the Artspace with Tegeder and two of her studio assistants.  The experience felt as if the mouth of the artist was speaking through 34 hands.  I had more of a sense of a performance happening, than a collaboration with the artist. The collaboration more so happened between the student artists painting on the wall than between the artist and the painters. Yet,  knowing that the show would be completely painted over and dismantled by mid-March also emphasized the performative aspect of the work being temporary.

This kind of experience was a unique opportunity for young artists to meditate on the development of a professional relationship with an established one. Yet this was also a time to closely consider that work being created with my own hands.  A large part of this artist’s practice is collaborations — with students, composers and choreographers — but what does or should a collaboration look like? Where is the line between exploitation and collaboration? How does authorship change when another hand takes over the work (with the wall drawings specifically)? What is important about the nature of this ephemeral work?

After Graduating from School of the Art Institute of Chicago, Tegeder evolved to make site specific installations that were responsive to architectural structures. She often referred to these representations of the relationships with our existing spaces as cosmological, or relating to the origin of the universe. In this collaboration, I was one of many components in the operation of Tegeder’s practice, executing her ideas — the origin of this development and expansion, using an idea of fact to create a fiction.

Tegeder spoke about the transformational nature of performative work impacting the artist as well. It is interesting to consider this as a symptom of collaboration, each individual slightly shifting the outcome of the work. While, arguably, these shifts in the outcomes of paintings and drawings is a usual occurrence when working individually, but I do think that things happen that don’t when working alone. When she began to incorporate three dimensional elements into her installations,  she was sourcing shapes from her drawing and incorporating acquired materials from project’s surroundings. These objects she described, acted as props in a performance, physically walking in and out of a drawing was happening for the first time.

What was really peculiar for me, though, was the fact that I never saw Tegeder herself working on the wall drawing. So, in a sense she really lived up to the idea of the work being a performance, with her as the director. At first I was skeptical of this “collaboration,” to be totally transparent. I had all of those questions about authorship, but there was a part of her artist talk that gave some perspective on her thoughts about this.

At the talk, another student asked about the subtleties of her hand, and if it mattered to her that those be in the work when it is not actually her own. The importance of a person’s unique touch is a result of contemporary artists still valuing an important aspect of classical, or in Tegeder’s words, “transgressive,” painting. She told us that her work is about architecture, and arguably the architect does not make the actual space, but is an integral part to the drafting. For Tegeder, the drafting of the work is enough authorship for her because it’s supposed to be built like a building. This relies on participatory actors to hand the vision over to.

Tegeder is a painter who asks, just like the rest of us painters ,“why painting now?” These collaborations are a way for her and others to think about the expanded field of painting and the possibilities of performance within it; therefore, its ephemerality. A performance only lasts for a period of time, can be repeated elsewhere, and typically calls for the participation of more than one. This is how Tegeder thinks about painting. After all, this work will be taken apart and painted over, only documentation and various metal, wood, and plexiglass fragments left as evidence. 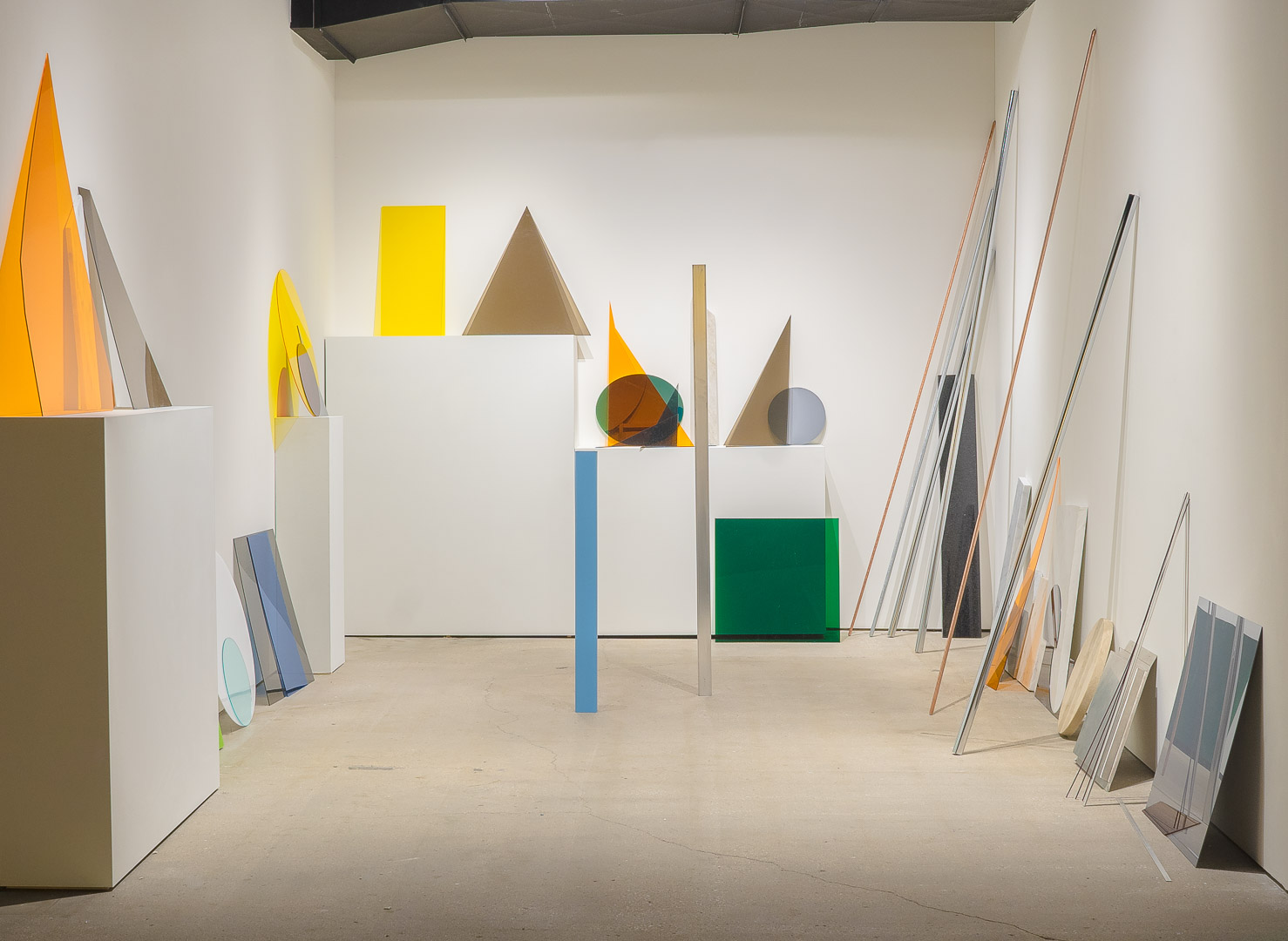 Chroma Machine Suite: Forecasting Fault Lines in the Cosmos and a student collaborator’s show In Collaboration With (curated by Isabel Vargas, Paige Edson, and myself, located in the resource room) will be on view at the Artspace until March 17th.