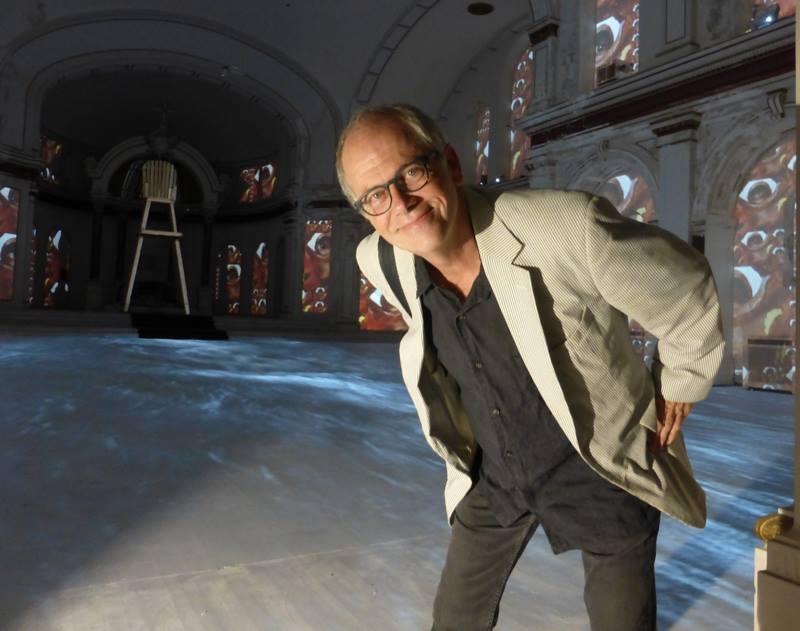 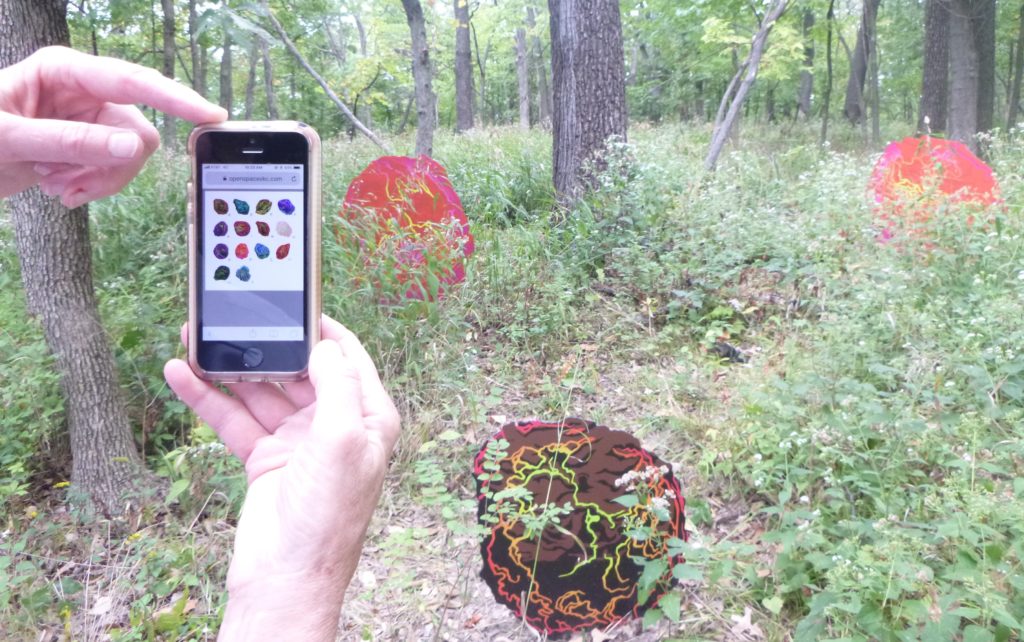 Sometimes we’re in such a hurry to see all the art that we don’t see any of the art. It takes several days to see everything in Open Spaces,  spread across the Kansas City metropolitan area, running through October 28.

I’ve seen Michael Rees’ inflatables at the Nerman Museum of Contemporary Art, site-specific installations by Ebony G. Patterson (…called up) and Shawn Bitters (Burn Out) in Swope Park, Nick Cave’s psychotropic installation, Hy-Dyve, at Linwood and Benton, Joyce Scott’s bronze tribute to Harriet Tubman at Union Station (Araminta), and outdoor projections and sculptures at the Kansas City Art Institute (KCAI) and the Nelson-Atkins Museum of Art, by Anila Quayyum Agha (This is NOT a Refuge) and Jennifer Steinkamp (Retinal), respectively. I don’t know if I’ll make it to everything. But I’m trying. 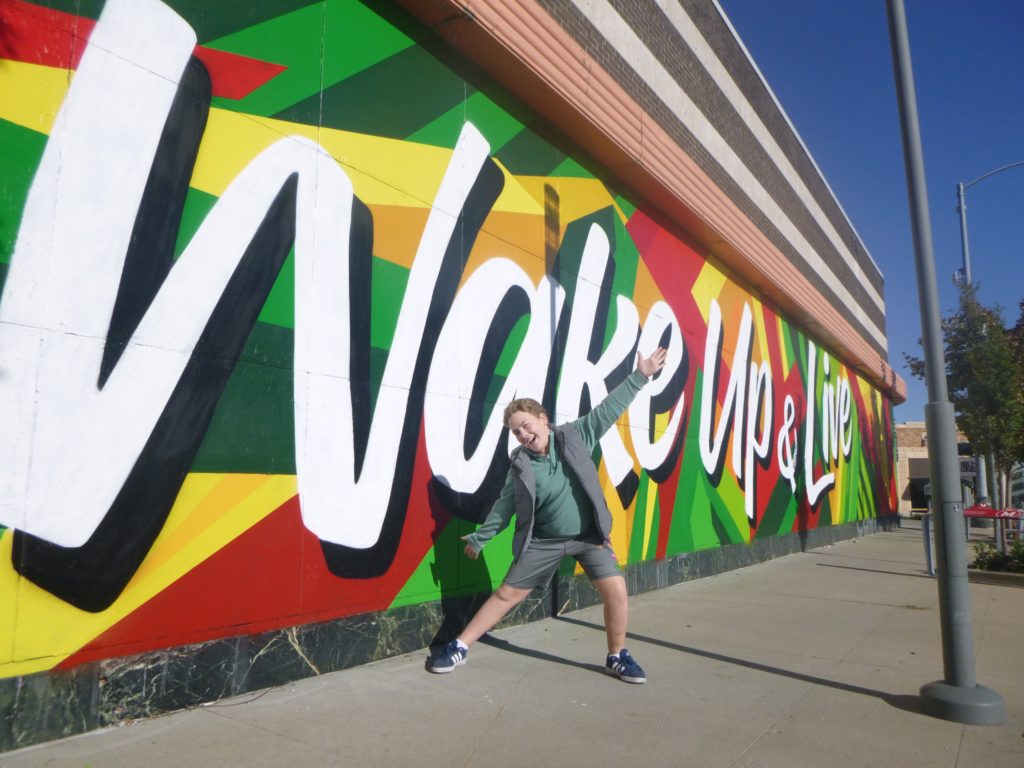 Mo’s neighbor Ike, and Sike Style’s mural on the east side of the Drugstore (photo: Mo Dickens)

I’ve set aside Sunday mornings for Open Spaces treks. Most of them involving Nick’s church. I finally found a church that I want to attend on Sunday mornings. My neighbor Ike (age 10) and I get pastries most Sundays in our Waldo neighborhood and then take an art-related photograph somewhere to post on Facebook. We’ve been to Ted Riederer’s Never Records at 1611 Oak, Nick’s Church, and Sike’s Wake Up And Live mural on the side of The Drugstore artists studios at Westport and Main. Last Sunday, September 30, I finally caught some of the free performances at The Pavilion in Swope Park. Every Saturday and Sunday afternoon there have been performers out there, but I work on Saturdays. I’m glad I made it. 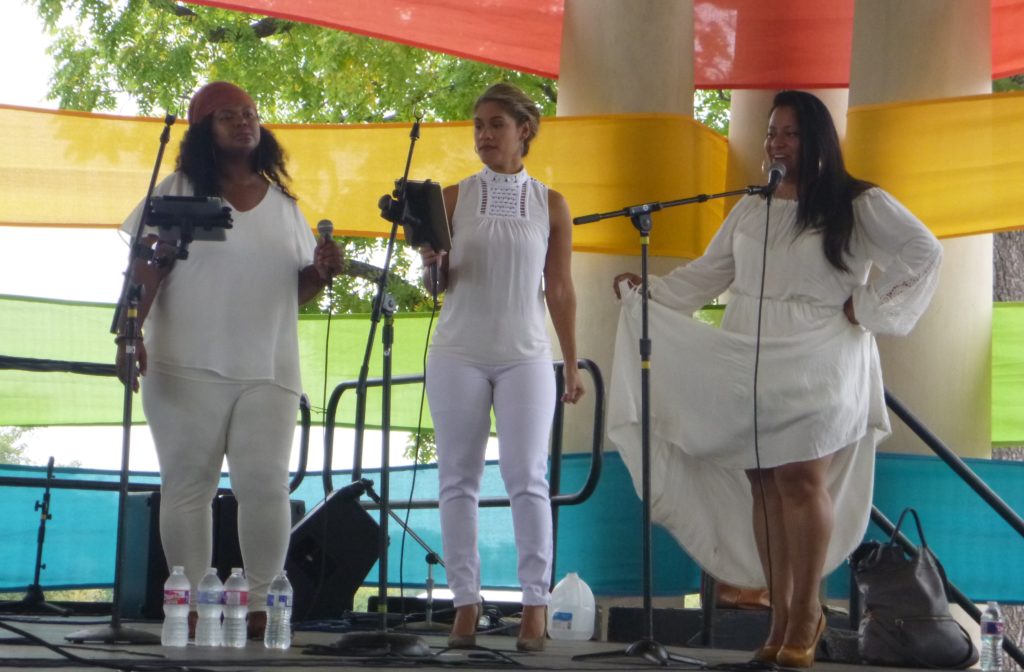 There were three performances that afternoon, the KC Rumba Collective, which put their own spin on some popular tunes; BCR, a crazy, local music collective that always delivers the goods; AND Chicago’s Mucca Pazza. How do you describe Mucca Pazza? They are like a bunch of ninth-graders who joined a high school marching band, but the band director died, so the kids came up with their own music and marching routines themselves and had so much fun they decided to continue as adults. I’ve been to a lot of musical events in my life, but I had never witnessed a rocking tuba solo performed by a guy standing on a bench directly in front of me while a cheerleader held the bench steady grinning from ear to ear. The cheerleader was grinning, not the bench. So was I. 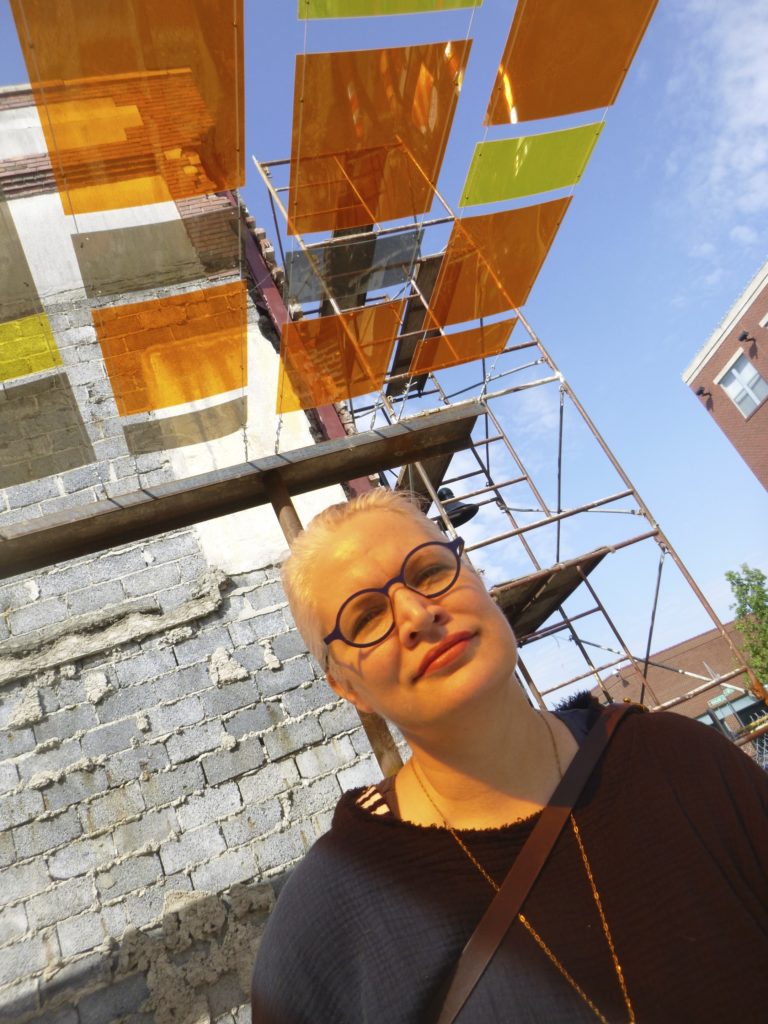 One of the best aspects of Open Spaces for me has been experiencing these events/artworks with fellow travelers. I hiked the Shawn Bitters trail with Irene, a retired neurologist. I visited Lucia Koch’s colorful transparent canopy (The Call, Calling)  near the Gem Theater at 18th & Vine  with Debra, an artist. I visited Nick’s church with Meg, one of the principals of Metalabs, the art conservationists. A friend from the Bay Area, Kris, joined me for the Mucca Pazza performance, and while we were there I showed her Dylan Mortimer’s pink tree (Tree, Broken Tree). You know, the one that was dead, so Dylan painted it pink (and added gold glitter)  to represent his new lungs via double transplant last year. And now new growth has sprung out across this once dead tree. Yeah, it’s kind of goosebumpy.  The next day Kris and I walked from my house on Charlotte Street to University of Missouri – Kansas City (UMKC) where we saw a beautiful bronze sculpture by Flávio Cerqueira of Brazil (Any Word Except Wait), and a wrap-around projection (hand-drawn animation) of the colonization of North America by Federico Solmi of Italy (The Great Farce). 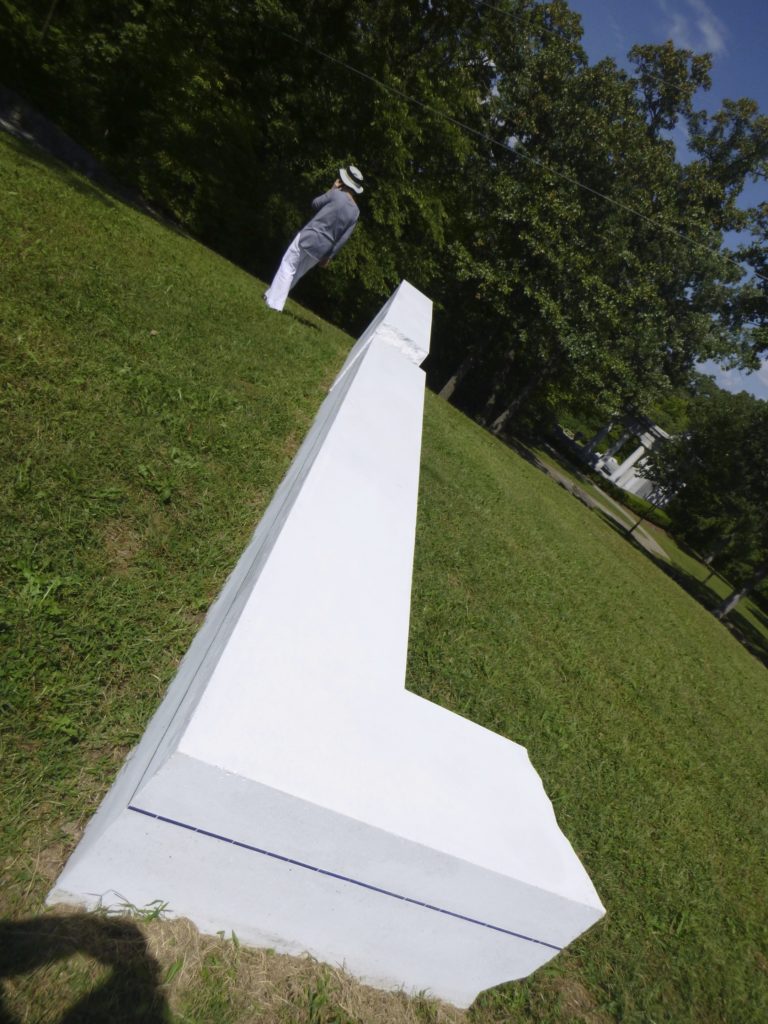 My wife and I took one Sunday morning to visit Nick’s Church (I’ve been five times!) and more of  the Swope Park installations, which are spread over hundreds of acres. We especially loved Jill Downen’s installation (An Architectural Folly From a Future Place) at the Swope Memorial, which offers an incredible view of the whole park. We had never been to that site and as we wandered around the parking lot of the Swope Memorial golf course I asked a couple of golfers if they knew the location of the Memorial. One said, “I’ve always heard there was something on the other side of the clubhouse, but I’ve never walked around there.” His loss.  Jill’s massive white sculpture trimmed in blue lapis sitting on a green hill is visually stunning, and the view just down the hill from there is something every Kansas Citian should experience. 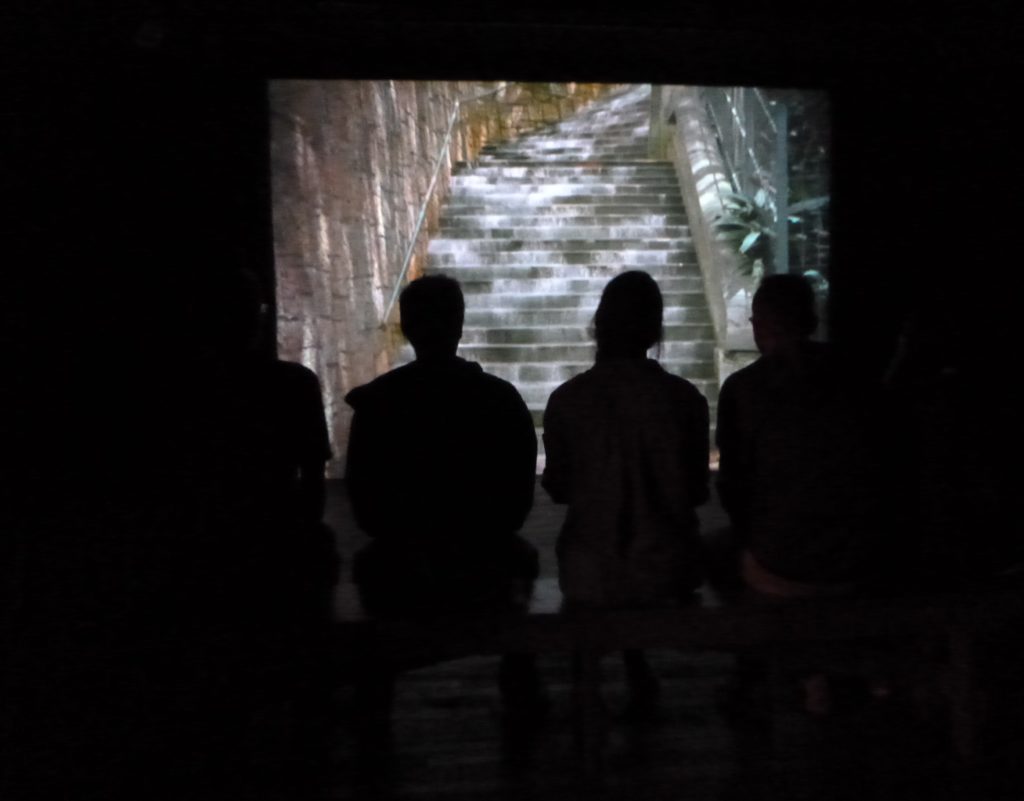 We’re hosting an Open Spaces installation at the Belger Arts Center, where I work four days a week. We have a large projection of an “urban waterfall” that was shot on 35mm film by Brazil-based artists Leonardo Remor and Denis Rodriguez (Waterfall as Cinema). I’ve been able to sit on a bench and enjoy the waterfall with visitors from Berlin, New York, and other far flung places. I’ve shared Waterfall as Cinema with bus loads of people from Naples, Florida, Salt Lake City, and Cincinnati; plus, classes from KCAI, KU, Benedictine College, Washburn University,  Johnson County Community College, and more. They come in with their Open Spaces apps, or the guide books, and they tell me what they’ve seen so far and where they plan to visit next. While they are here they take in our expansive Renée Stout exhibition, which includes 93 pieces, all from the Belger Collection. One visitor, artist Rina Banerjee of New York, told me that Renee was one of her heroes and she was thrilled and surprised to see so much of Renée’s work in one collection in Kansas City. I think a lot of the out-of-towners have been surprised by all the art they have found here. That was one of the reasons we got involved. In addition to hosting “Waterfall as Cinema”, Belger Cartage also helped out with some of the hauling and installing of the larger pieces of sculpture for the festival. Whether it’s installing, promoting, sharing, hosting, or some other way of helping out, some locals have jumped in to help make this project a success.  What do I do? I Witness. I’ll be back in (Nick’s) church soon. Can I get an Amen? 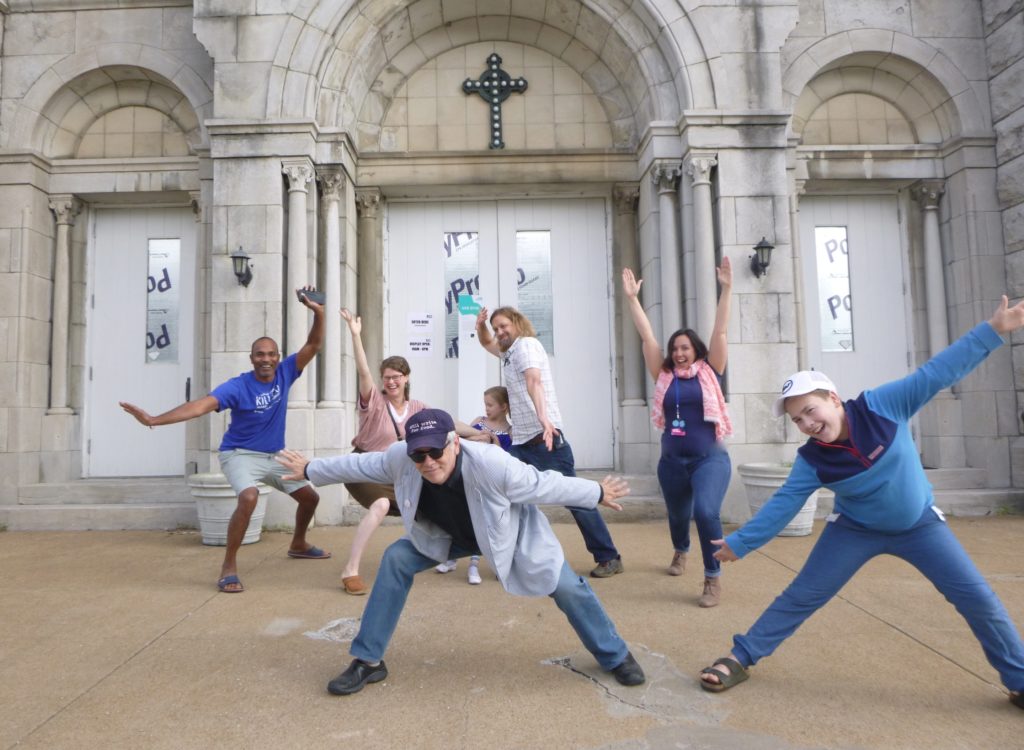