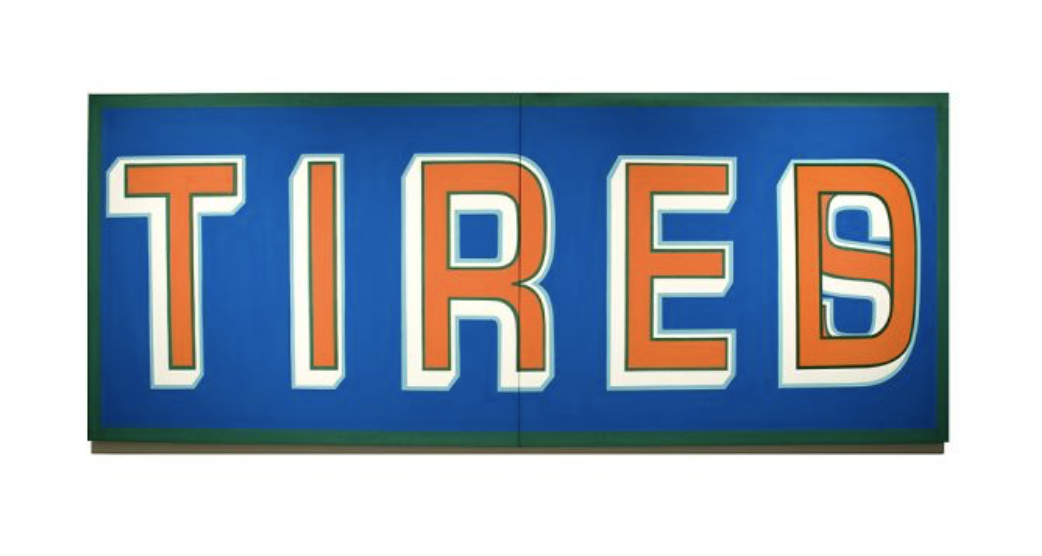 Archie Scott Gobber and the Uncertainty of Practice

Archie Scott Gobber has been working in Kansas City for decades and has established his place as a sign painter with a sense of humor. His work takes common sayings and phrases, shifts them slightly, and creates bright, graphic, and visually appealing paintings. While quick to “get” in its presentation and immediately satisfying, the paintings have a human quality hidden within the language of advertising that emerges with a carefully considered eye. His 2009 piece Tired is the word “TIRES” in orange font, reminiscent of a roadside advertisement, with a D painted over the S in brighter, higher chroma orange paint, so that it reads “TIRED”. It is as if the blue-collar sign painter has refused to touch up the sign and is instead using his craft to broadcast his own weariness to the world. 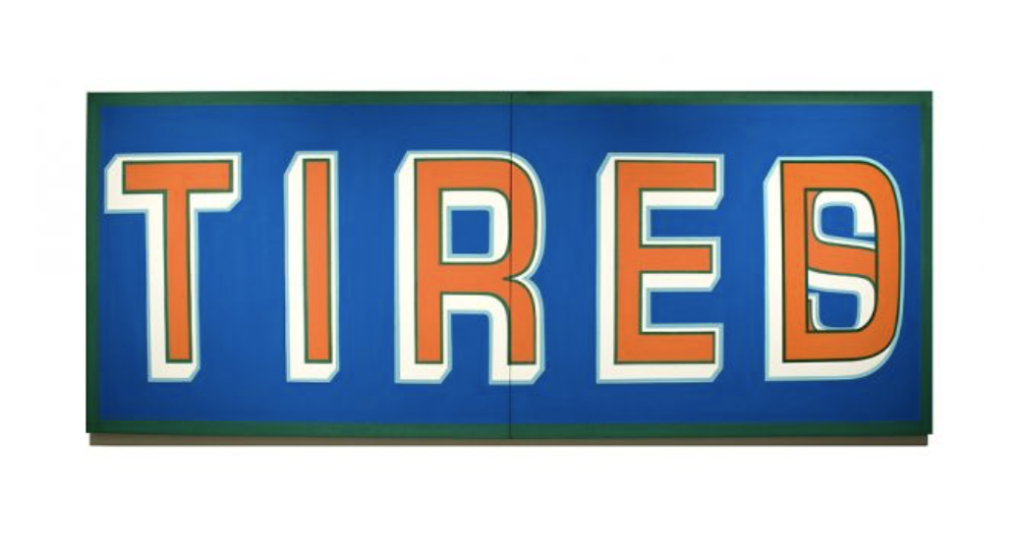 This shift from the commercial to the personal in Gobber’s work gives it a humor that is a little ironic, but ultimately sincere in its expression of humanness. The text is carefully chosen and there is a fluidness to the words, an ambiguity that allows for many possible interpretations. Often the text becomes the image itself, the words architectural compositions.

In referencing the graphic language of advertising, Gobber’s work includes themes of consumerism and access to broadcasting. Advertisement is the form of visual content that people see most frequently, and Gobber’s use of this style harkens back to his blue-collar upbringing. Works that read “Artist on Duty” (2017) and “Professional artist: do not attempt” (2017) align him with such workers, both validating artwork as “real” labor and relieving his work of the elitism often associated with contemporary art.

Recently Gobber’s work has shifted in content, reflected in his latest solo show, Amateur Content, which ran from May 11th to June 16th at Haw Contemporary Crossroads. While his work previously tended towards the formal, focused on the words themselves and the relationship between graphics, language, and advertising, his new body of work is more specific and overtly political. The exhibition included a painting of the words “They/Them/Their,” a sculpture of an American flag bent into a kneeling position, and a headstone memorializing the site of a Confederate monument. 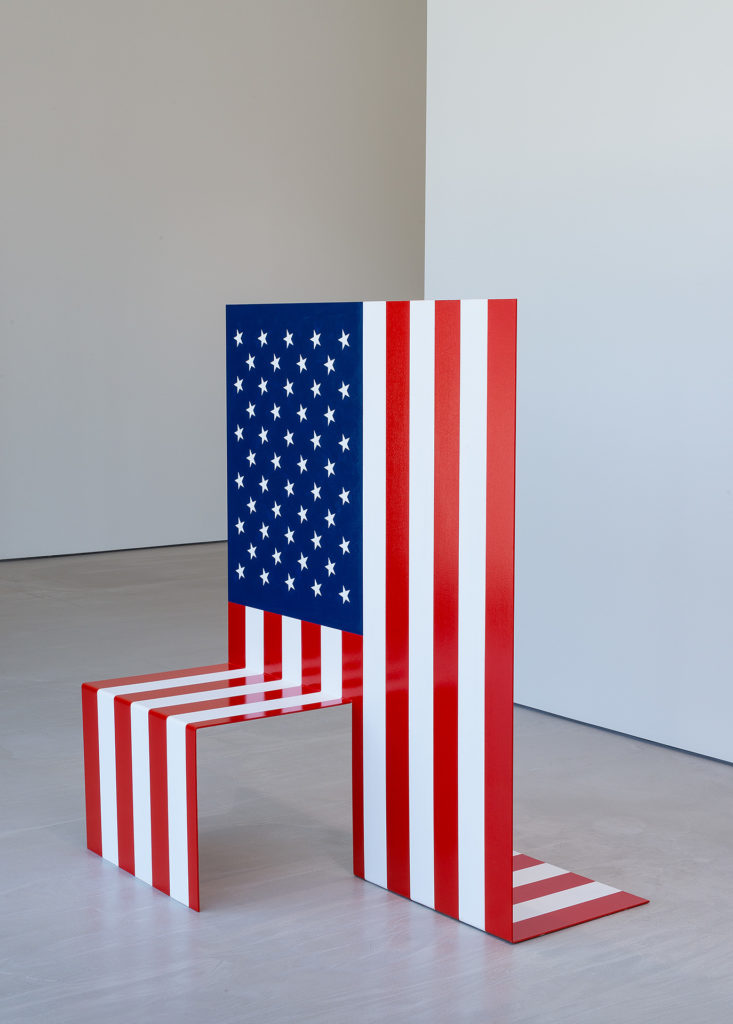 What first strikes me is that I have no idea what point Gobber is making about these current issues. It’s hard to say whether he’s celebrating the use of the They/Them/Their pronoun by gender non-conforming people, or condemning it. It seems neither; he seems to be saying “This is here, this is happening,” like a reflection of our changing world. But if that’s the case, I have to ask what purpose that serves, and what it adds or takes aways from the conversation. The lack of context around the new work makes it feel superficial; much of it seems to have no more nuance than a headline.

Some of the work in the show is stronger than others: Monument to a Removed Monument feels, in part, like a commentary on the nature of collective memory and the shift in the popular narrative of a country’s history. But, like Kneeling Flag, Monument to a Removed Monument does not get at the heart of either issue: racism in America. Colin Kaepernick’s protest, despite the media narrative, had little to do with the flag; he was protesting police brutality against Black Americans. Kneeling Flag feels sterile and disconnected from the people the protest is for. Instead, it centers the flag itself and the specific act of kneeling. Gobber’s signature ambiguity doesn’t serve him here: the anthropomorphized flag perhaps is kneeling back at the protesters, or perhaps it is kneeling with the protesters, acknowledging the brutalities enacted in its name. 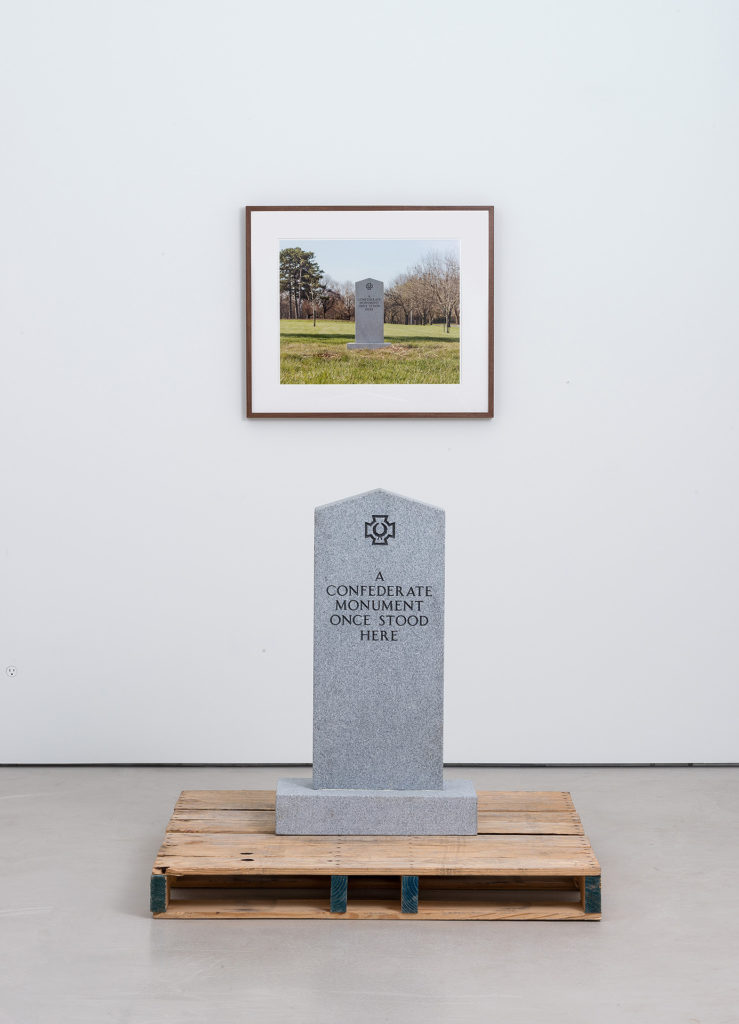 I can’t help but feel leery of a white, middle-aged, well-established artist using the struggles and movements of marginalized people to advance his own work. It’s as if the specific political issue—be it the pronouns of transgender people or police brutality—could be any issue, so long as they are, to use Gobber’s words, “current” and “now.” By distancing the people at the core of these issues, Gobber is informing the audience that the work isn’t for the Black community or transgender community, even if it draws from those experiences. Instead the work seems to address people like Gobber–white, middle-class, middle-aged folks–for whom these issues are abstract. People in this demographic can think about things like protests against police brutality with detached emotion because it isn’t in their direct line of experience and doesn’t personally impact them.

I wasn’t the only one to feel this way about the work in Amateur Content and controversy arose on both Twitter and Instagram last month. The Instagram thread called for accountability from Gobber and the institutions that represent his work, questioning both Gobber’s intention in creating Monument to a Removed Monument as well as criticizing it for its lack of community engagement. Gobber responded that the piece was meant to remind its viewers of the “horrible history” that was commemorated in an affluent part of Kansas City. He went on to say that he meant no harm in making the piece.

At the end of the day, artists like Gobber must examine the role of their work in the backdrop of our social and political landscape. The subjects that he’s tackled in Amateur Content are ambitious, but if artwork is important work then artists have a responsibility to be thorough—and that might mean knowing when to take a step back and let other voices be heard in the conversation.