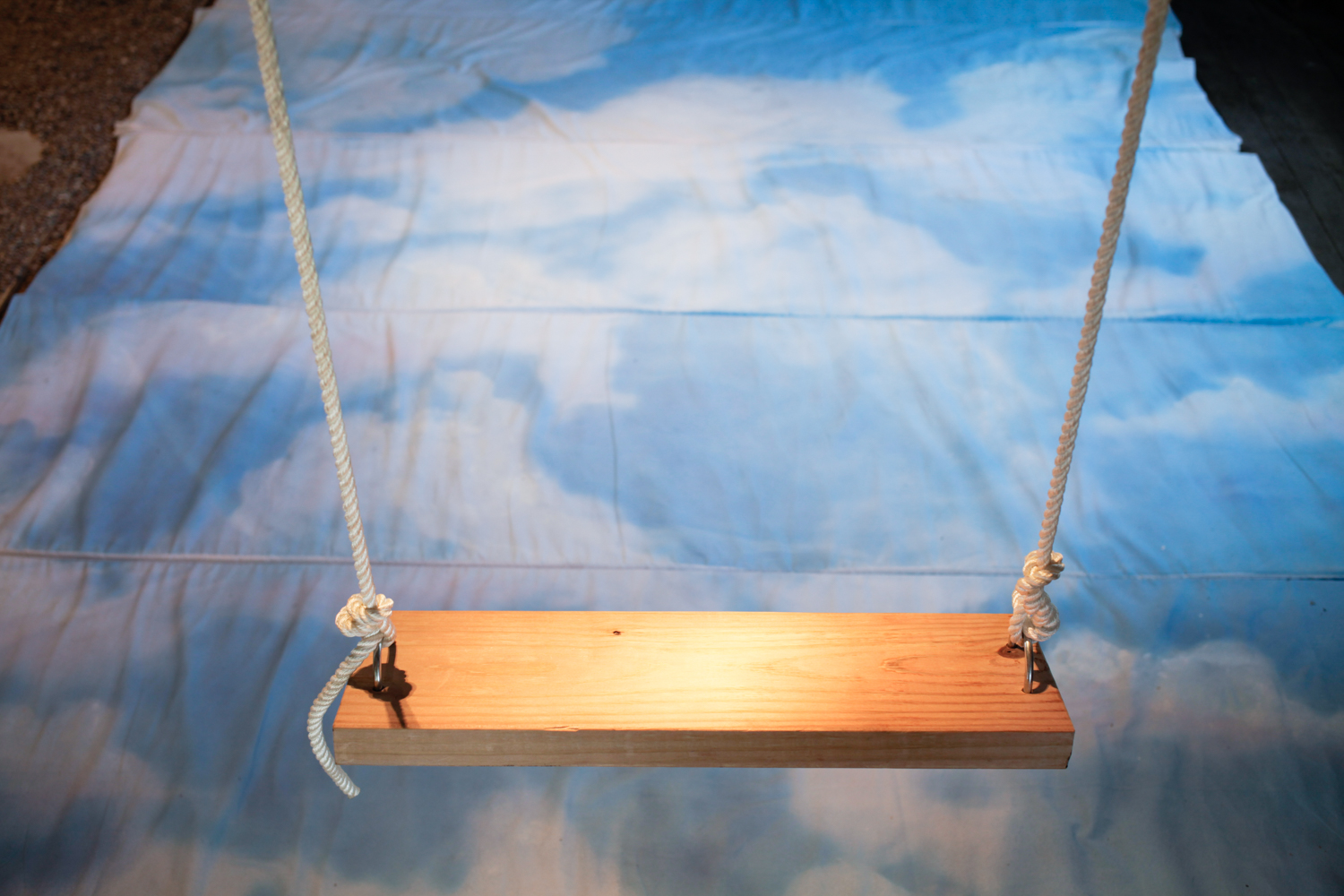 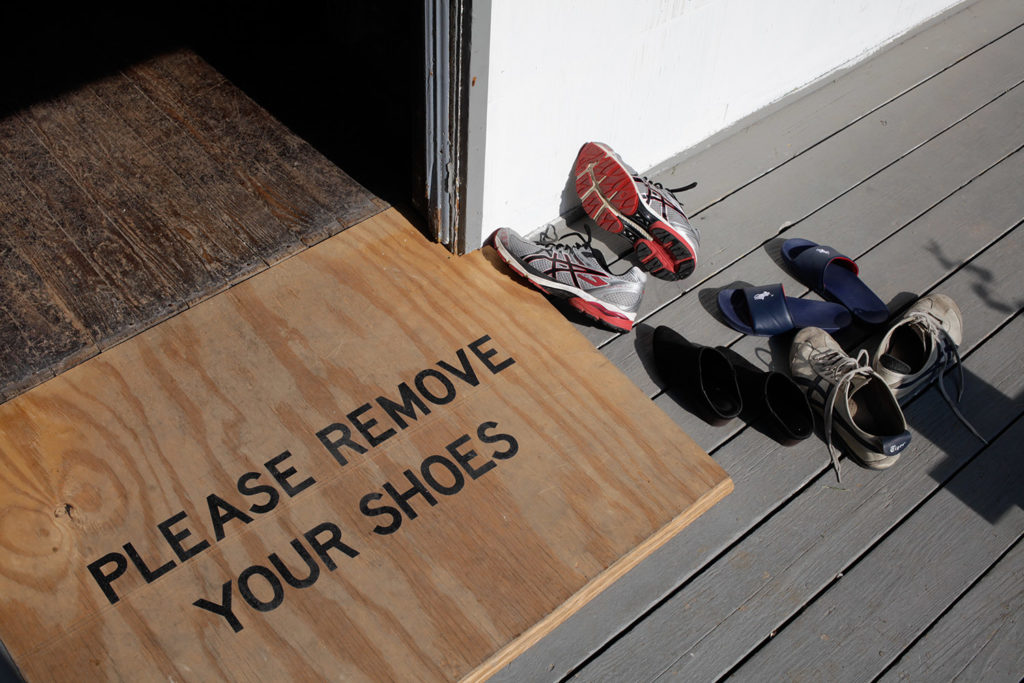 “Please remove your shoes,” the sign reads. P L A Y P I T transforms Open House into a serene, fabricated oasis. Visitors can swing from a rope swing or view a video made by artists Marina Peng and Rachel Youn while sitting on a wooden bench suspended on waves that are printed on plastic sheeting., feeling encompassed inside of a false reality. By throwing a person into an imagined world, this indoor-staged simulation of an outdoor environment references the transformative potential of video games. The overtly-constructed spaces are  products of our desire for fantasy, feeding into our curiosities for places that aren’t immediately available to us, while creating an awareness of its falsehood.

Feeling the smooth, bamboo-printed foam tiles underneath the soles of my feet as I moved past the first room of the house reminded me of a children’s playhouse. This installation explored the experience of touch, and how sensation can launch us into the past. While it felt as though I was in a world similar to that of Mario’s, I kept thinking about how easily it is for humans to sink into a simulation.

A vinyl print of an obscure Google Maps Street View location spread across the house’s three main windows, blocking the outside world. My sense of being in a real world environment came exclusively from the sun rays that still peeked through. The squishy foam surface placed under the swing had been spray painted to look like a sky, placing viewers in a surreal world where the sky becomes a pathway. Fiction has the ability to transform our perception of reality and transport us somewhere else. The creation of stories and multiple pathways of narrative draw us in with the appeal of something other than our current world.

The vinyl resembling the texture of water is placed underneath a monitor in the bench room, playing a video of moving water. This is the only form of new media incorporated within the installation, and adds to the nature of viewer displacement much like the cloud flooring. Instead of watching the water flow beneath us, like we usually do when we come in contact with a body of water, its orientation directly confronts the viewer while hanging on the wall. The presentation drew my eye to the screen by mimicking the textures of the water that were hanging beneath it. While creating the sensation that I was actually looking down at a body of water, my eye then followed the vinyl on the floor to the waterfall in the back corner. This created a feedback loop which connected to the vinyl of water below me. It became integrated into the environment, creating the sensation of being able to experience a constructed world and a video world at the same time, much like a video game character. 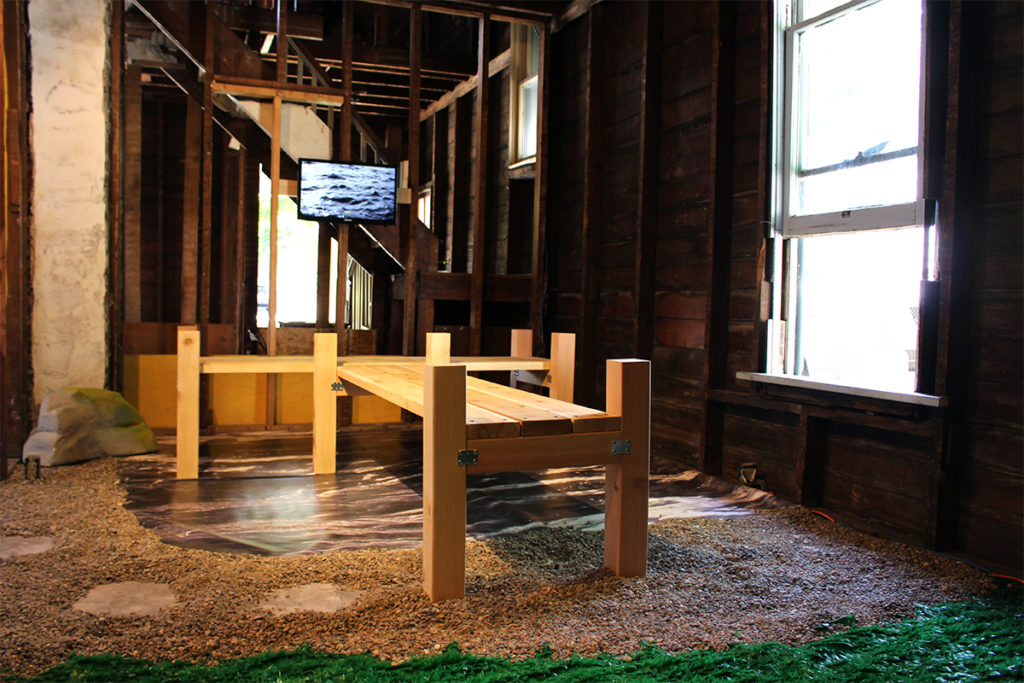 Dock at P L A Y P I T  image courtesy of the artists.

To leave the bench area, you have to pass over the small area of astroturf-esque flooring and into the back of the house, where a fabric waterfall is cascading from the guts of the ceiling. With assembled rocks to compliment the fictionality of this nature scene, this installation questions the human appeal to nature. The desire to mentally melt into the atmosphere and give into the different sensations of touch was hard to resist, for as much as the space is constructed, there is still a part of me that wants to believe I’m watching an actual waterfall in the back corner of the room or feeling my feet sink into a cloud. Our curiosity about an existing elsewhere pulls us into fictional worlds like video games and fantasy movies.

We are able to experience the classic Nintendo Mario games free of real-world associations. With the elements of the game being mainly abstracted, thus being simplified, we are able to better connect with our disbelief. Game physics are always on our minds when playing realistic video games. Environments that mimic reality such as PlayerUnknown’s Battlegrounds, we expect a level of believability in the action/reaction relationships that unfold. When you’re in a game driving a dune buggy and it runs over a small bump at 20 mph, we don’t expect that it will fly 30 feet into the air and spin out of control. I think completely games that unfold in a world that escapes the peculiar details of our own  are appealing to those who want to detach themselves completely from reality.

Traveling to places that are unlike our current atmosphere can stimulate ideas that wouldn’t have been reached in our day to day lives while living in Kansas City. While I was present in the space, I was aware of the landscape that was presented before me, instead of the landscape I have become accustomed to. When you lose yourself for hours in a video game,, it takes you a minute to reconnect with the physical world when you shut your laptop. 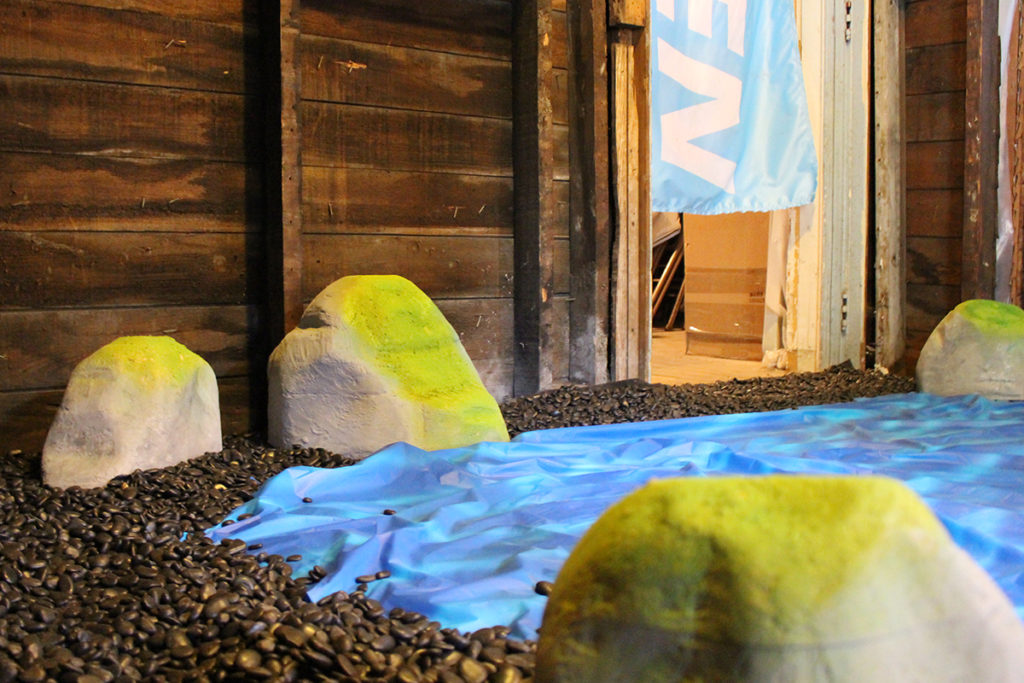 Waterfall (detail) at P L A Y P I T image courtesy of the artists.

Growing up, I was always told that the cure for depression was “going for a walk” or “getting outside,” as if returning to my evolutionary roots will make years worth of mental illness disappear. It’s easy to feel like fresh air and birds chirping is the cure to everything when your life is consumed by various stressors. This installation, with it’s nod to Mario’s world using a lack of fine detail, brought a sense of calmness to my life for the 20 minutes I lingered throughout the space. The innocent nature of P L A Y P I T encourages mental and physical exploration into a world which is not our own.