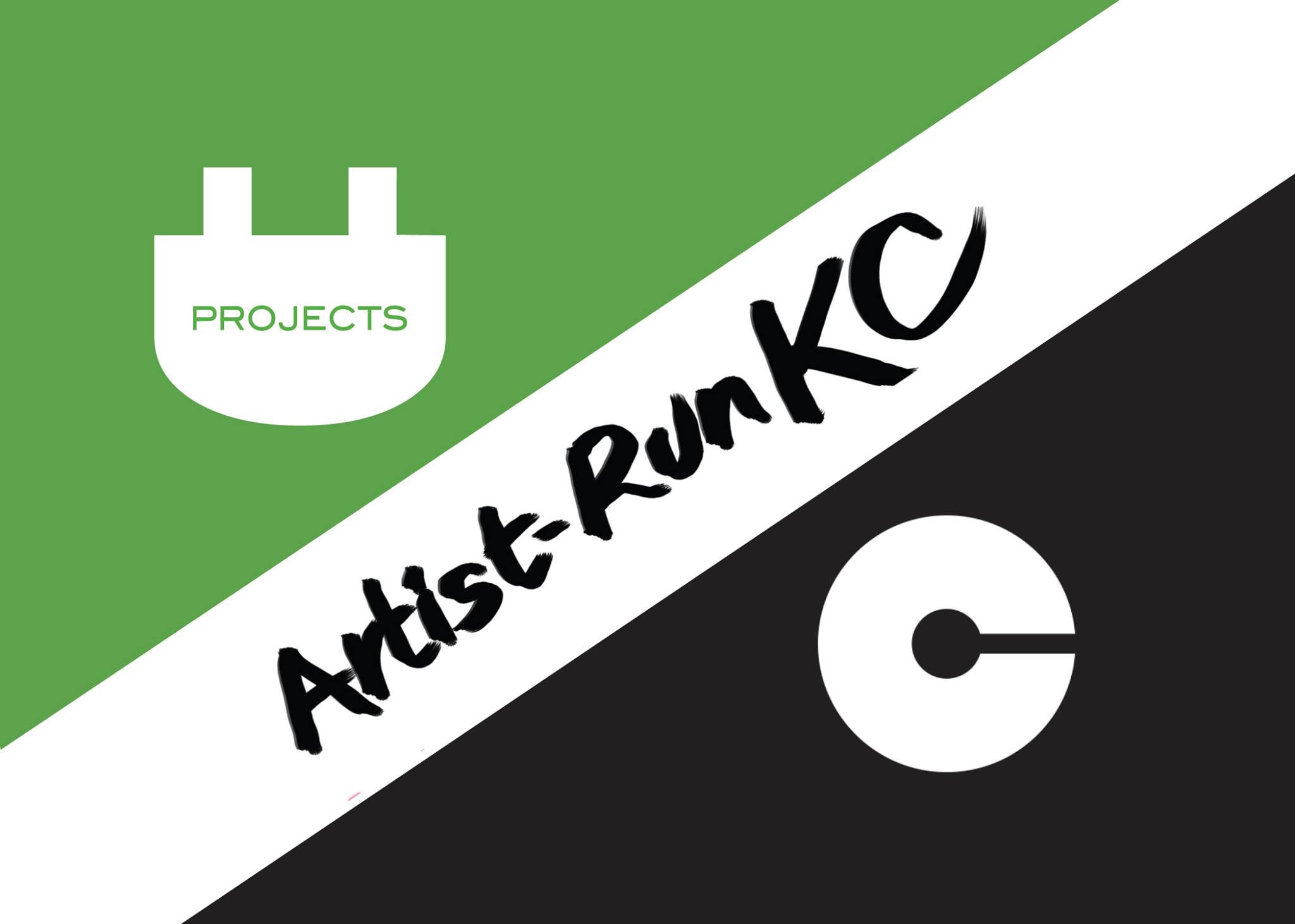 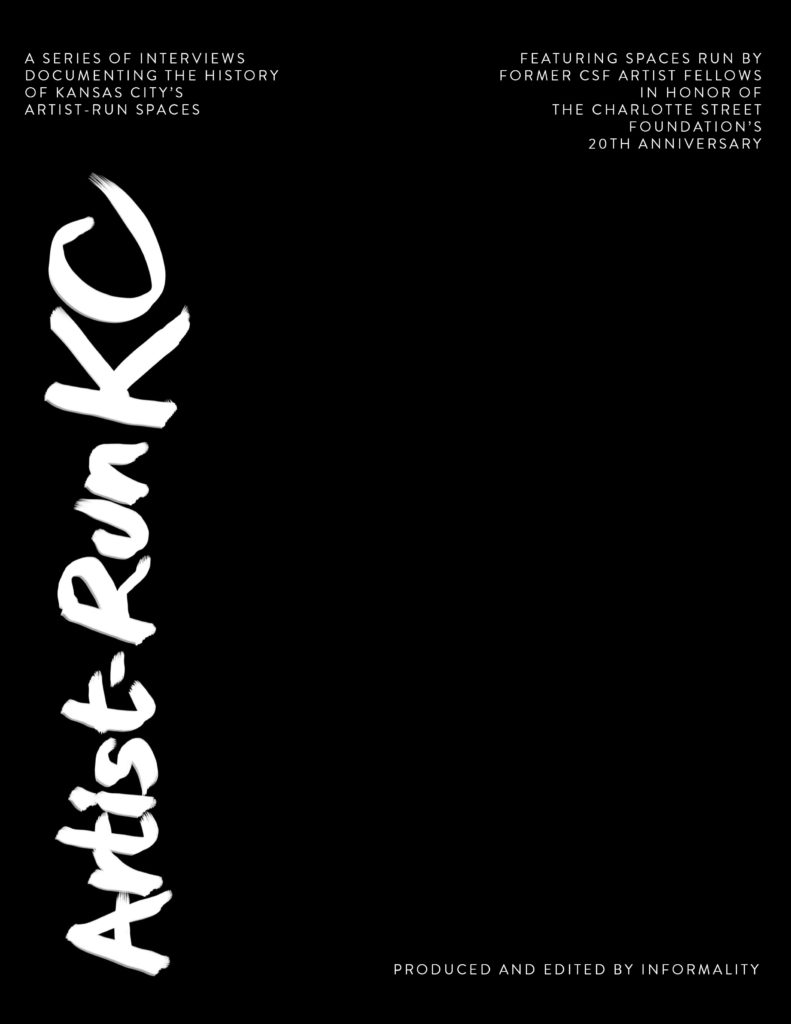 Instead of a formal introduction, we decided to focus on our mission at Informality of documenting the conversation about art in Kansas City. With my prior work as a Co-director of PLUG Projects, second Director of Subterranean Gallery, and current work with this publication, I have always had a close relationship with Kansas City’s artist run spaces. This print publication was able to feature a selection of Charlotte Street Foundation Artist and Performance Fellows and was lucky enough to be involved in the 20th Anniversary Celebration, Every Street is Charlotte Street. A huge thank you to Amy Kligman, Pat Alexander, and the rest of the team at CSF for helping us coordinate putting this together. To my former collaborators at PLUG Projects, you amazing folks epitomize the ideal of Kansas City’s artist run, and I’m incredibly thankful for the time I spent with you all. And last, but absolutely not least, my staff at Informality. I don’t know where the publication would be without you. My senior editors, Blair Schulman, and Rebeka Pech Moguel, our Programming Director, Patricia Bordallo Dibildox, and our amazing interns and staff writers Julia Monte, Madison Murphy, and Rebecca Swanson. To all of you, along with our founders and supporters along the way, Thank you.

The following is an interview conducted by Swanson and myself that creates a framework for the larger narrative of this publication.

Garry Noland is an artist originally from Kansas City that is also somewhat of a local art historian. He has a friendly and warm personality and has lent his ear to many in KC artist-run history. Rebecca Swanson and I chatted on the phone with Noland about his knowledge of alternative spaces before our time and why they’re so important to the local arts ecosystem.

Melaney Mitchell: How did you first become familiar with the Artist Run Movement in Kansas City?

Garry Noland: I think that I first became aware of the artist-run space phenomenon through two

different venues. One was the Art Research Center and it was located at 48th and Harrison, in the so-called “student ghetto” at the time.

What did they do there?

It was an artist-run space that was run by a guy named Michael Stevens. He was an exhibiting artist, so he had a lot of artists working for him as volunteers. It was mostly a space dedicated to geometric art, art from Europe, Bauhaus inspired work, neoclassicism, and things like that. I think one of the things that sticks out for me about Art Research Center was how open Michael was to participation from non white-male artists.

The other space was the Women’s Caucus for Art, which had a chapter in Kansas City for quite a while in the late 70’s and early 80’s.

What years were those around?

Then there was the Kansas City Artist’s Coalition.

Which you ran for a while.

Well, I started out as a volunteer. I did copy editing, and paste up, and layout for the magazine, and became familiar with the operation after they moved into an exhibition space at 39th and Bell. A woman, Claudia Doherty from St. Louis, was the first executive director. When I started working there, there was a pretty robust infrastructure already there. There was the magazine, funding in pendom, good board support, and a pretty involved exhibition committee. I hired on to replace Claudia in 1986. Long story short, James Martin took over for me, and then Janet took over for him.

With these artist-run spaces, I’m curious to go into a reverse chronology of how you first got introduced to them. What do you feel like are some of your favorite artist-run spaces in Kansas City from the last 10 years?

I’ll have to say, I don’t know them all. Some of the obvious ones are Front/Space, Plug Projects, Open House. I’m not sure if we’d consider Bunker an artist-run space, I guess it is. I think that they do good work. The thing to me with the artist-run spaces, which it seems to me is true all over the country, artists are taking control into their own hands. The way that it’s happened started with the alternative space art movement starting in the late 60’s and into the 70’s. It was another way to put in some framework where the artist gets to be in control and make the decisions. What those organizations in Kansas City are doing is a second, or third, or fourth generation beyond the things that happened mostly in Chicago or New York in the late 60’s and early 70’s. Oh! And Subterranean Gallery! Duh. What the fuck. Critical mess up there.

Haha! No offense taken Garry! What do you think separates an artist-run space from the institutions?

Do you feel like the artist-run space is vital to a community? If so, why? You’ve done a lot with artist run spaces. Even with Plug Projects, you were the leader of Crit Night for a while.

Well, yeah. I think it all depends on the individual. It gives the person/artist affiliated the sense that he/she/they belong. It’s a venue for them to try out ideas for either success or failure. I guess it’s important to note in kind of a big picture way that the more artist-run spaces you have, the bigger and more generative the dialogue is. Artists can get a chance to see what everybody else is up to, which makes for a richer conversation. With a group like Tiger Strikes Android, they are like the McDonalds of the artist-run organizations. They have a gallery out here in LA and in Chicago and New York. It’s like when you have that kind of visibility that’s developed, then it takes the grassroots artist or the self taught artists, or emerging artists and gives them more legitimacy. Because somebody has a legit exhibit in a phone booth or an elevator shaft or under a bridge or whatever, and it’s automatically legit. With the power of the internet, especially platforms like Snapchat and Instagram, they’ve got the same kind of broadcast as the larger institutions.

It kind of levels that playing field.

I’m curious to know, in terms of that playing field, how the landscape of artist-run spaces has changed since you’ve been interacting with it. We’ve been having conversations with folks like Davin Watne, who were running spaces in the 90’s, talking about how it was all about postcards and now it’s all about Instagram. Back in the 70’s, how has it changed? What has been the way in which people get out what it is their doing and utilize it for interacting with the community over time?

Well I think it’s definitely more democratic. Maybe it has to do with the fact that it’s not all white-male anymore. With Davin Watne it was, with the early Charlotte Street it was, it’s just not that way anymore. So that’s changed. Depending on one’s perspective, it’s still, in many ways, an insider’s club, but not as badly as it used to be.

That’s good that it isn’t as bad as it used to be. Within the gap between the time you were talking about with the Art Research Center and the last 10 years, what do you feel like have been some of the most significant artist-run spaces in Kansas City? Like between circa 1985-2005.

Well besides what Davin Watne was doing, I can’t really think of that many around Kansas City as far as artist-run spaces.

Did you ever go to David Ford’s space Left Bank?

Oh yeah. You see, I think that that was also part of that good ol’ boy situation, and if you didn’t go to the (Kansas City) Art Institute, which I didn’t, and many people didn’t, that led me away from pursuing my horizons as much as I should’ve. I think that there was, and still is, an uptown-downtown attitude and I didn’t feel like I was part of that town. They might have not felt like they were part of the town that I was in.

So you feel as though it was a lot more separate and exclusive versus it being more inclusive due to the democratic nature of the internet?

I think it depends on the perspective. The Kansas City Artist’s Coalition could very rarely attract any interest from the Art Institute crowd or the UMKC crowd.

It is still the same way. There still is that uptown-downtown attitude that creates a divide that the Art Institute crowd didn’t want to attend some of the programs that Kansas City Artist Coalition had in place.

What kind of programming was that? I know you had a publication.

We had a publication, but we also had a performance art series. We had a film series, we did poetry readings. I think towards the end of my tenure, we were starting to professionalize some of what was going on there. But the KCAC is membership based, and mostly it’s people who are not academic painters, sculptors or what have you, and there are different venues for professional hookups and universities and colleges that are voided when you step out of that circle. That’s part of what the Artist’s Coalition is there for. To maintain and build professional contacts.

Professional contacts, but not necessarily the KCAI bubble.

Well, you know. I believe the chairperson of the Printmaking Department at the Art Institute

[Miguel] was recently on the board of the Artist’s Coalition. So there are exceptions to every rule. But, everybody, even something like Plug Projects has a bubble. Front/Space has a bubble. All of us, as individuals, have our own bubble. It takes a little bit to either let somebody into that, or get out of it.

Are there any significant artist spaces that are on the rise in LA right now?

I think there are almost too many to talk about. BBQLA, the Dawson Warehouse, Elevator Mondays.

Is that art installations in an elevator?

It’s a regular exhibition series in an elevator.

There’s another one, the gallery also. The Tiger Strikes Asteroid, LA,  Chicago, and New York. There are some new ones sprouting up in St. Louis too. I just think it’s part of a movement and a way that people can keep the professional level of activity that they had during their MFA/BFA experience, or whatever it is. It’s about keeping up with that level of activity instead of going off to the studio all by yourself. 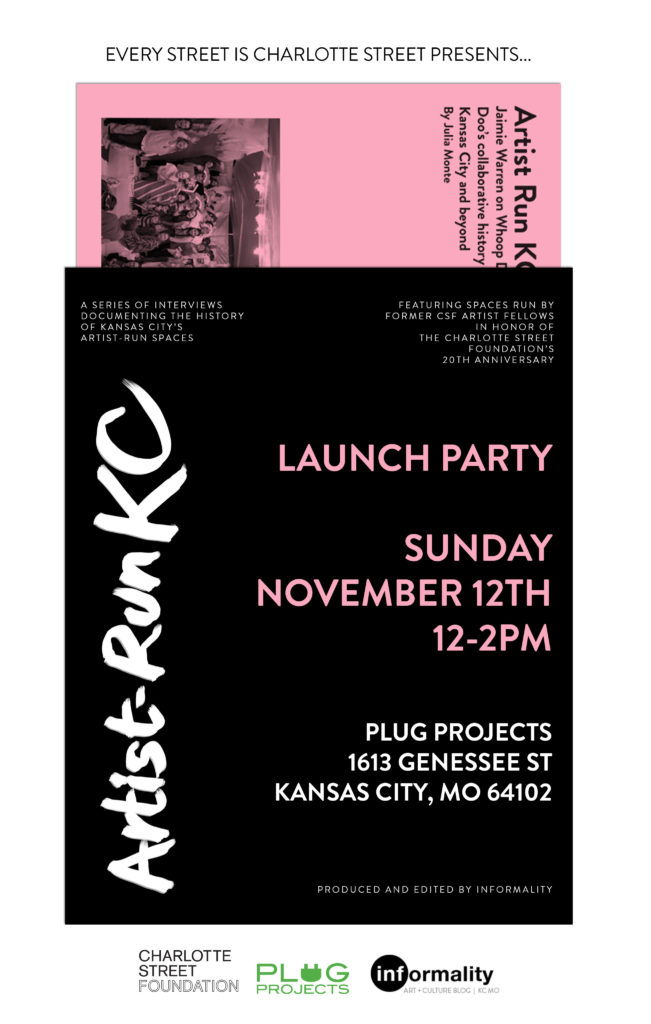 Artist Run KC will launch at PLUG Projects on NOVEMBER 12th 2017 from 12-2 alongside their revised PLUG book! Stop by to get a copy of our limited-run publication!