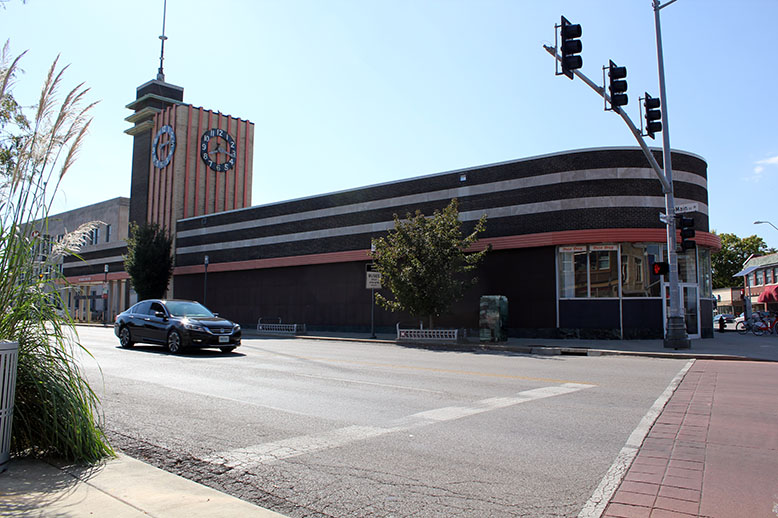 Artist Run KC: Dylan Mortimer on The Drugstore Studios and Connecting Faith Communities to the Arts

Dylan Mortimer is an artist, organizer, and pastor living and working in Kansas City, Missouri. He is the Director of The Drugstore, an artist community in midtown supported by Redeemer Church and Fellowship. Mortimer’s focus is grounded in finding ways to bring together the art world and his faith in reciprocal partnerships of mutual benefit. We sat down for a conversation in his large window-filled studio a few spaces down from my own in the old Katz Drugstore building. 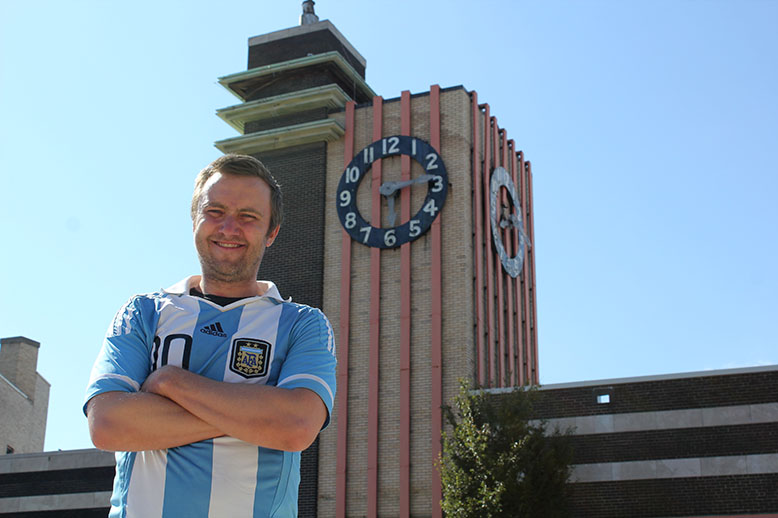 Dylan Mortimer in front of the clocktower at the historic Katz Drugstore building, now a studio space for more than twenty artists.

Melaney Mitchell: How did your involvement with The Drugstore come to be? Who decided to start it and why?

Dylan Mortimer: I was invited to have a studio space by the church leaders at Redeemer. It was started by a few artists after the building was purchased by the church. They wanted to support the arts in some way, but weren’t sure how.

Does Drugstore have a faith-based mission or is there any desire for the church to become more involved in utilizing the space for their programming?

Not really. They (Redeemer Church) may need to be more involved in the future… only for practical reasons really though. From the beginning they’ve been pretty “hands off” with it.

What were the first couple of months/years like and some of the biggest shifts and challenges?

The biggest shift has been moving from a space that was inhabited by friends of friends to a more selective and organized process of awarding applicant artists.  As The Drugstore has grown, our mission shifted and we’re starting to establish a vision, and criteria for artists.

So when you started at Drugstore, who was involved?

I didn’t really start Drugstore, Sean Starowitz was leading it at the time. Years before I talked with the guys at Redeemer about the space. It seemed to be largely for a few artists to come in and work at the time. Sean was the first person to start organizing The Drugstore to something beyond that. There were only a few artists that knew about it, back in 2013 or 2014. I started in late 2014; I had another studio lined up, which didn’t work out, but the pastor at Redeemer invited me to join.

Last year the Drugstore became a non-profit, so where is the next place envisioned and what are steps to get there?

The intrigue it has for me is the idea of faith community involvement. That makes it both complicated and a good support opportunity. In this, my two worlds are combining, finally talking to each other more than they could and should. There has been a genuinely large gesture in supporting the arts from faith communities here in Kansas City. The next thing is figuring out how to sustain what we have going here at Drugstore. There is potential from a lot of different sectors. We are just thinking through what is the best course of action and avenue with all of this. While I am helping to lead it, the churches are still thinking through what they desire out of it as well. I am currently working on sorting this out with leaders, and finding the variety of places we can get funding. Continuing to hone the vision to make pitches and asks, as Drugstore wasn’t created with this idea of sustaining in mind. Were trying to ask what is desired and what we want to see.

What is that thing you want to see Drugstore become?

A true sense of emerging artists supported by communities of faith that say they want to support the arts. While that has already happened, I want to continue to see it happen. There is a lot more potential in partnering with more churches and finding ways to support artists for longer and at higher levels. If it were up to me, residency at The Drugstore would be free, it would be a true award. We currently offer a Gift of Faith award where we give a studio and stipend at no cost to four people each year; I think everyone should be able to have that. A genuine artist residency award supported largely by churches would be a thing that I think would blow a lot of peoples’ minds. You don’t see a lot of partnerships like this.

Can you talk about the history of the Gift of Faith Awards and why you wanted to bring that with you to the Drugstore?

My life has largely been lived with a foot in the world of art and a foot in the world of faith.  I’ve been disheartened to see how little communication and collaboration there is between the two.  I hear an increasing amount of faith communities interested in supporting the arts.  The Gift of Faith awards are a way to tie the two together. 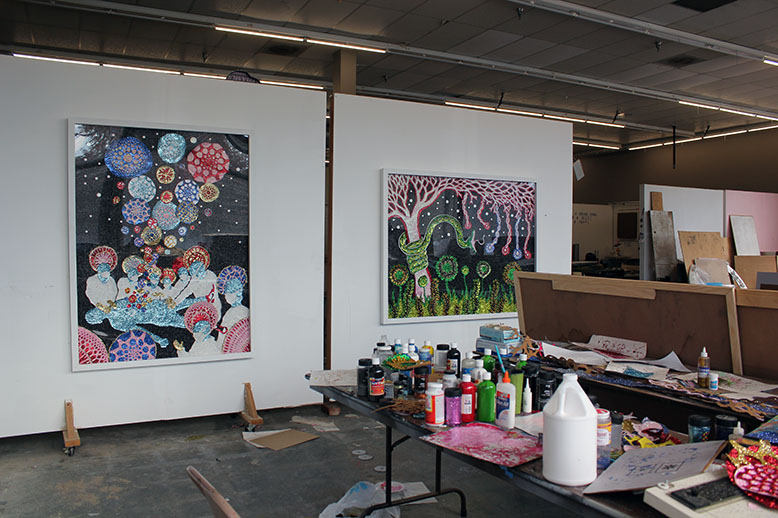 Inside Dylan Mortimer’s Studio at The Drugstore

Do you feel like that would shift the selected artists work or create a certain faith-based parameter to participate?

I don’t think that it would because the selection process is not done by the faith communities. While they fund it, we hire outside artists and cultural workers to make those informed decisions. The faith communities have a level of trust relinquishing that power to these artists. Have you ever felt that while here?

No, not at all actually.

Right, so these faith communities really can have supportive relationships with artists in ways that surprise people. If we even have to have that conversation, you’re not a part of this. That is the importance of this not being a church building. This is a free space for artists to make. 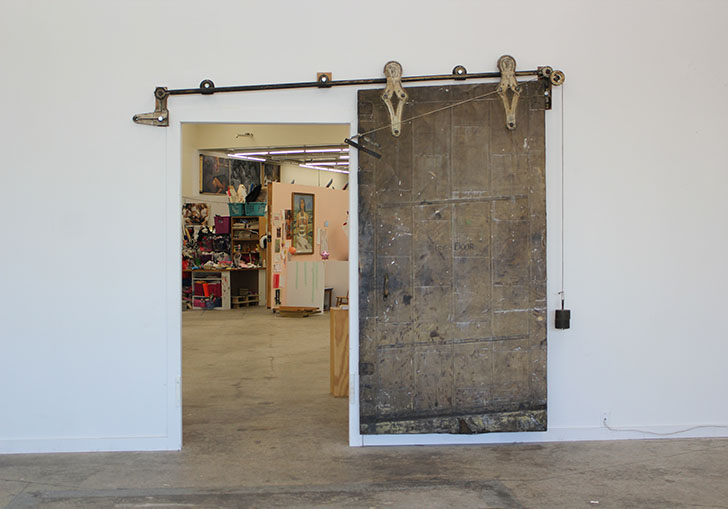 Thinking back through art history, many projects, commissions, and how artists’ entire careers have been church funded, but backed to make very specific work, how in a contemporary American society can that structure work? Most artist-run projects do stop because of funding issues; do you think that a faith based community support structure can help curb some of this?

To that point, I really believe, after truly being a part of all of these faith communities, that there is a really strong desire to do just that. Most communities have not counted the cost exactly of what that involves, but I think many of them are getting close. What it could be in my mind is similar to what we have seen historically, but instead a much healthier version of that. It’s not one supporting artists through the selling of indulgences, we don’t want to go back to that. We also don’t want artists to feel that their work is being controlled or conditioned to do what the church wants. This is the opposite gesture, and I see a lot of churches following more of an idea of valuing the artists as artists and trusting them. They just want to send support with no strings attached, empowering artists to do things they otherwise couldn’t do on their own.

Do you see Drugstore continuing in this building, in this space, and expanding upon that mission?

I think so. As far as I know, it will remain in this space, the more that the space can expand and the  Gift of Faith grant to get better, the more it will improve. The posture of a church blessing an artist with space, funding, and thus time, is contrary to what a lot of artists perceive as the role of a faith community. This is also contrary to the ways that churches feel they can get involved with artists. I am encouraged that I see more and more communities getting closer to being able to do that.

So you want to foster a sense of giving beyond financial, but in terms of time, energy, and care in these faith communities towards supporting the arts community?

Yes, I would love to foster that relationship for those that are interested in that. I walk around art scenes and spiritual crowds, I think there are so many beautiful ways they could connect. However, at the moment they usually don’t for all of the reasons we already know about. All of the baggage and history, and while I am well aware of that, I think there is an opportunity for community. There is fellowship and help to be offered on both sides.

After receiving the CSF Visual Artist Award, what impact did that have on your practice and desire to be an arts organizer?

The CSF award had a large impact on me as an artist.  I can’t say it directly had an effect on a desire to be an organizer.  But CSF as a whole has always inspired me to find creative ways to support artists.

Do you feel like as both an artist and organizer you’re bringing parts of your studio practice into your work at Drugstore?

Absolutely!  My work has a lot to do with the values of the drugstore. Less so about the physical space and more so about the fact that a church owns it. I am always reconciling those realities. They are really similar wavelengths, and it’s impossible for me to disassociate the two of them. Me being here is a continued dialogue around that topic. It doesn’t so much dictate down to the content, medium or the scale, but it is a part of my larger practice to get these different spaces to talk to one another. 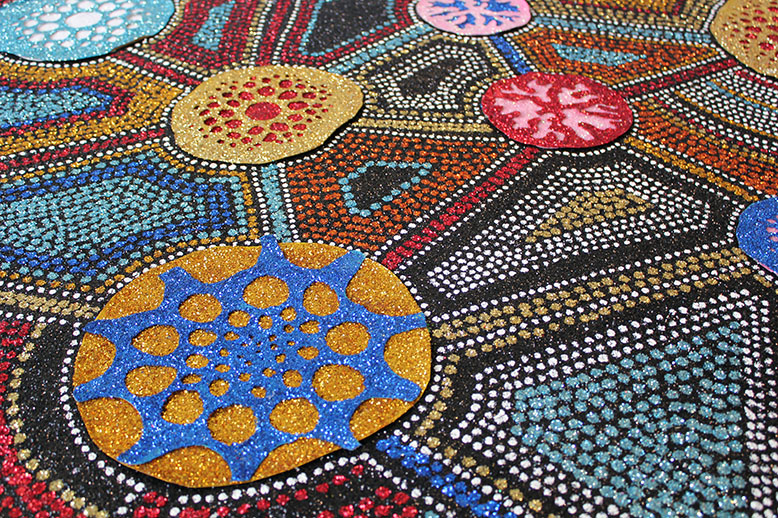