“We challenge the way theatre meets its audience by installing performances in different venues as well as in site-specific locations and unconventional spaces.”

I had the opportunity to talk with actress, producer, director, and curator of the Fishtank Theater, Heidi Van, about the performing arts scene in Kansas City. Through this conversation, Van explains her role in the organization and the purpose of artist-run spaces to address injustices in the community. 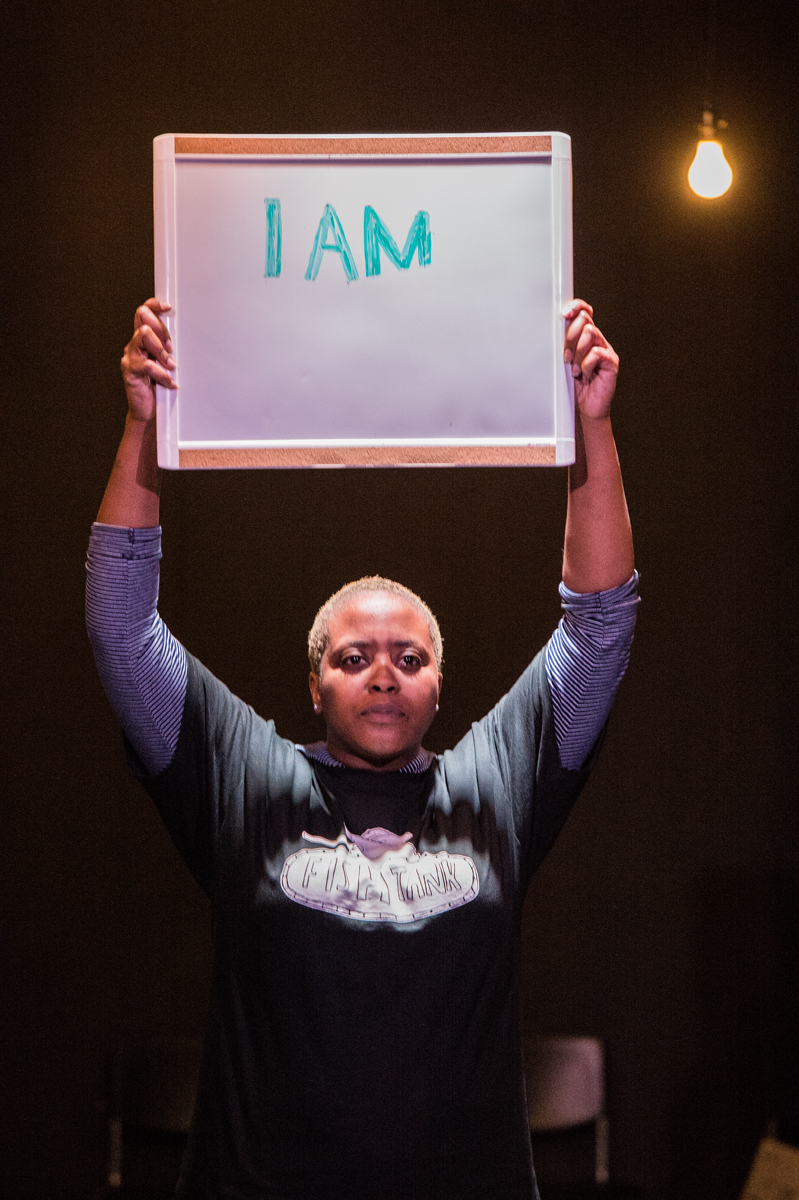 ALONG THE LINE, presented by Fishtank.

Maddie Murphy: What do you see as the greatest need in the KC theatre and performing arts scene today?

Heidi Van: The performing arts scene in KC is thriving. There are a lot of individual artists and small collectives producing theatre.  In the past 10 years performances spaces and eclectic venues have emerged to accommodate this growth. With this abundance – constant programming, new and interesting venues, a growing community of actors – there is worry about the audience to support all this work. The greatest need of the theatre scene today, and not just in Kansas City, is to generate new audiences.

KC is working hard to be considered a “theatre town”  like New York or Chicago, where theatre is a viable option of entertainment equivalent to “going to the game” or “going to the bar.”

On that note, how does Fishtank address these needs?

The Fishtank addresses this need by challenging the way that theatre meets its audience. Our material is fresh, its content is progressive, and its artists are committed to the aesthetic of risk-taking and failure. Some productions are movement-based, sparse in text, and set to original live music.  These are the typical attributes of the  performances that The Fishtank has staged in windows including the original works: L’Histoire D’Amour: A Clown Love Story, 53 Days & 52 Nights: A Clown Requiem and Voyeur: An Urban Rhapsody.This theatre al fresco experience creates tiers of audience, from the ticket purchasing patron who sits in chairs on the street, to the pedestrian passers-by who turned the corner to discover a theatre in the street.  We challenge the way theatre meets its audience by installing performances in different venues as well as site-specific locations and unconventional spaces.

One example is Death By Shakespeare, a re-imagining of the narratives of five Shakespearean female characters who committed suicide taken from the perspective of poet Sylvia Plath, staged in Greenwood Social Hall, a refurbished Baptist church. Another example is Heaven & Hell, a fusion of Oscar WIlde’s  The Picture of Dorian Gray and The Fisherman and His Soul. This production was an immersive promenade in which small groups of audience were led by a narrative guide through the spaces of 1717 – 1715 Wyandotte (home of The Fishtank) and the story unfolded around them.

The Fishtank will continue to develop work that meets the need of generating new patrons and the main tactic we use is to challenge the way theatre meets its audience. 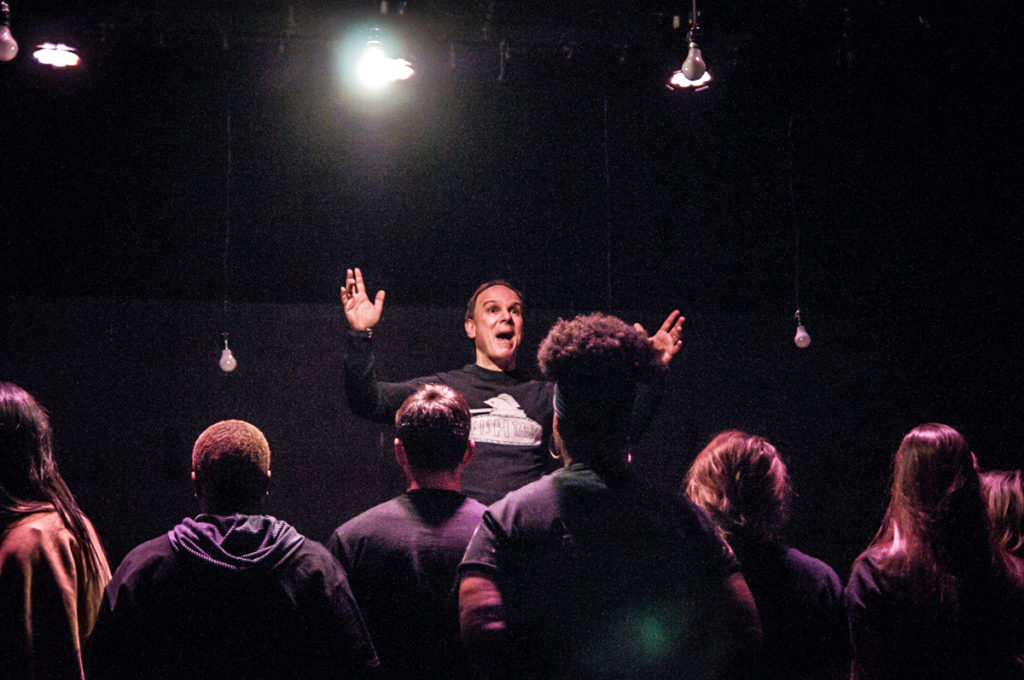 ALONG THE LINE, presented by Fishtank.

What is special about Fishtank? What does it do for the community?

The Fishtank is a framework for networking theatre artists, providing them a platform to generate art that is relevant to – and respectful of – today’s changing political and social climate.

Our early mission was to nurture the development of new work and inspire theatrical entrepreneurship by inviting generative artists and playwrights to test their new work in front of a live audience. This part of the playwriting process is vital to the development of new work. The Fishtank hosted series to promote new work with curated First Friday series that featured a variety of performances on a theme, the Summer Shorts Series that featured short works by one playwright to provide patrons with a sampling of their work, and fully staged “world premiere productions” like First Lady? written and performed by Kansas City chantuese DeDe DeVille, Mask of The Broken Heart, a noir mask by Stephanie Roberts, Pies From The Porn Kitchen by Natalie Licardello, Prop 8 on Trial by Lisa Cordes, Lessons from Marlene by Katie Kalahurka, Jolly Rancher by David Wayne Reed, and many more.

The Fishtank also produces work that other theatres sometimes won’t. We produce work that has been untried and untested in other markets. Most theatres pick up major works fresh from New York or Chicago. We don’t for a variety of reasons: that’s not our mission, those works have large production rights, and instead of spending money on production rights, we keep those funds in Kansas City and nurture local based playwrights.  I am most proud that I have cultivated an audience that willingly partakes in the “risk.”

About once a year I will produce something with larger production rights and from an out of town artist and that is because it fits into the narrative of my season and resonates in the world today. These shows aren’t the ones other theatres are doing. Example: in April 2017 I produced Dry Land by Ruby Ray Siegel, a play about abortion. Before the rights were granted to me, the licensing company called the larger contemporary theatre in town and asked if they were interested in producing it – they said ‘no.’ I was told, “Heidi, no one is going to produce that play but you.”

Other theatres constantly produce thought-provoking plays that inspire conversations and observations about the world we live in. When I say other places “won’t” produce something – it’s referring to their mission. Dry Land could have been produced by other theatres, but I think it has to do with my personal aesthetic and my season of shows. The female narrative was too. We also produce work that is timely, relevant.  We also aren’t afraid of the uncomfortable talks and the work of social justice.

The Fishtank is a resource with the Aquarium Project Space, a true rehearsal hall, with a piano, a PA, and a Marley floor to dance on. It can hold dance rehearsals or Shakespeare! The Fishtank also does large scale projects that involve as many as 100 artists in one production with the ALONG THE LINE series, which is “a theatrical response to a specific moment in history” and presented as very, very short plays – 90 seconds or less in front of a live audience. It nurtures an environment where artists can contribute to the theatrical landscape in an accessible way, and in regards to our social justice work – all are welcome. 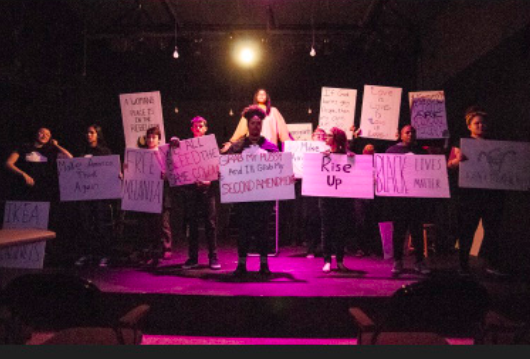 What is one thing you want people to know about Fishtank?

The Fishtank is still here. The Fishtank is a concept, not a location and is rooted strongly in new work, physical theatre and can now be found anywhere but expected.

How do you sustain Fishtank theatre? What obstacles do you encounter on maintaining or growing this project?

The Fishtank is now a 501c3. It receives grant funding and some private donations. The artists and project members work for a percentage of what comes in – thus enforcing the “theatrical entrepreneurship” part of our mission. I invest in people, especially for sustainability. I have an incredible internship program and nurture young artists that go off later to work at other companies around KC. I do need to focus on courting more large donors and spreading out the admin, development and artistic work.

What is the primary function of the Aquarium Project Space? Is it more as a service to the community or a way to raise funds?

The Aquarium Project Space is our production office and rehearsal hall. It is a great asset that monetizes itself and a beautiful and inspiring space to create for performing artists. It houses rehearsals, workshops, intimate performances and is available for other artists to rent for private practice.

What is the most important lesson you’ve learned from this venture?

I must always check in with my values and my mission – and when I do, the work flourishes. I have learned that I must always re-evaluate the values and mission to ensure the work is relevant and resonant. I have learned how to get things done and that my word is my bond, it is my integrity and I make programs and projects very deliberately and specifically. I can’t say ‘yes’ to everything.

How do you combat burnout?

I combat burnout by changing things up and challenging myself. It’s the challenge of the work that turns me on. And if I realize that my work isn’t turning me on, I have to go back and evaluate my values and my mission.