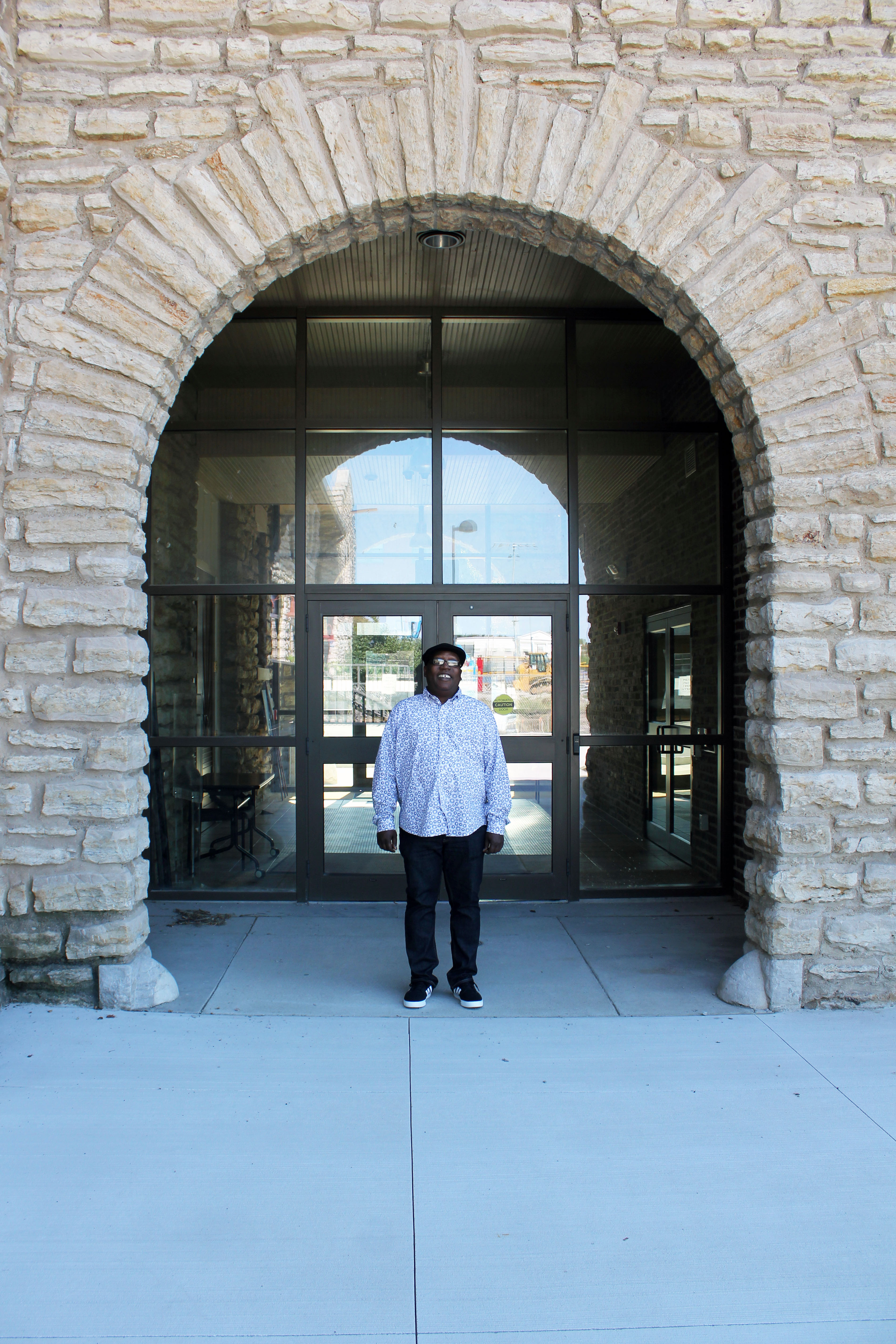 Glenn North is a poet, educator, and community organizer who has been instrumental in fostering a spoken word scene in Kansas City. Starting in the early 90’s with Verbal Attack, a live poetry reading series, and continuing with his involvement in creating youth poetry workshops. He has taken poetry from its formal literary identity, and transformed it as a vehicle to discuss contemporary art, history, spirituality, and activism. North currently works at the Black Archives of Mid-America in the 18th and Vine District. 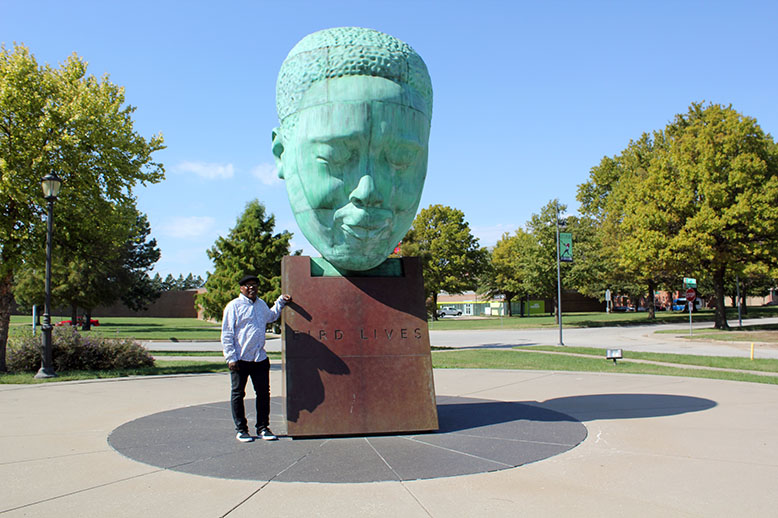 Glenn North stands next to the “Bird Lives” Statue of Charlie Parker in the 18th & Vine District.

You’ve been involved for years in the Kansas City poetry and performing arts scene. My familiarity with your work was in relation to the educational programming you were doing at the American Jazz Museum. Please tell us about that history and your poetry career in relation to those educational facets?

It all started around 1997, prior to that I lived in Washington D.C. and was active in the poetry scene there. I had always written poetry, but was introduced to spoken word there. Returning to KC, there weren’t many performative poetry readings happening here. Of course you had more academic and literary outlets, but no spoken word. I knew at that time the city was planning on initiating all of the redevelopment efforts for the 18th and Vine area and I felt like that would be a good location for what I was trying to do.

There was a small bar called the Mardi Gras that existed then. The owner, Alex Thomas, was kind enough to allow us to use that space once a month that we used for a reading series called Verbal Attack. The first event that we held, somewhere between 150-175 people showed up and Thomas was pleased with the turnout. I did Verbal Attack for three years, and while I was hosting it, the American Jazz Museum (AJM) had a huge grand opening celebration and they invited me. So, that was the first time I was hired to do a poetry performance, which began my relationship with the Jazz Museum.

In 2000, I  started working then for a small non-profit where I was doing poetry writing and performance workshops after school and people started to get wind of that. The American Jazz Museum’s education department asked me to start facilitating workshops exploring the relationship between jazz and poetry. That went well, and I began to develop an ongoing relationship with the museum and was eventually hired there in 2004.

At that point I started doing all of the educational programming for the museum – Jazz Poetry Jams, museum tours and things like that. Using Jazz as a lens to study history, race relations, social studies, and Kansas City history. I helped to formalize the poetry program we started there.

Working at the AJM gave me an incredible platform to work with musicians and visual artists. The museum’s art gallery, called the Changing Gallery, was one of the few spaces where Black artists could have their work exhibited. I started to work a lot with those who were shown. Things kept evolving and happening. 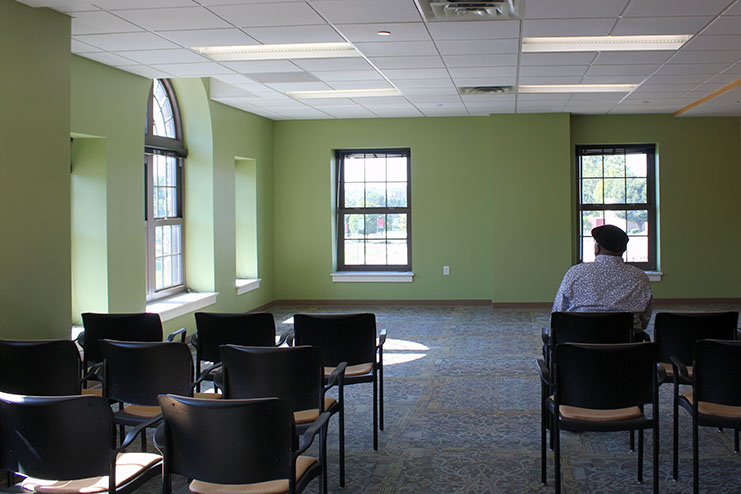 Glenn North sitting in a multi-purpose space at the Black Archives of Mid-America where he now hosts educational programming and lectures.

So, where has that led to now?

I have been at the Black Archives of America for three years. I initiated a poetry program there called the Mbembe Milton Smith Poetry Series. He was the first African-American graduate with a masters from UMKC’s Creative Writing program in the late 1970s.

He is somebody who has not received the attention and the credit he deserves. Unfortunately, he committed suicide in 1982, but the poetry series honors his legacy. It allows me the opportunity to keep my educational focuses alive. The poets we feature are African-Americans that are using history to inspire their work. This has been really exciting to see, as many of these poets are offering counter-narratives on some overlooked aspects of African-American history.

Aside from the educational aspects, could you talk more about Verbal Attack and its history as a poet-run nomadic collective?

There were three of us; Jay Hawkins, who was one of the lead organizers along with myself and Marcus Brown, our DJ/Propaganda/Consciousness person. Prior to doing Verbal Attack, Marcus and I had a lot of conversations about what was going on in the Black community, what was going on with young people at the time in Kansas City. He was the first person to really challenge me to use poetry as a vehicle for working with young people.

As we moved forward, we started doing a lot with youth in the community under the umbrella of Verbal Attack. The organization also allowed me to become more involved with the artistic community in Kansas City and with all of the different poets who would come and share at our events on a monthly basis. The events were a merge between Hip-Hop artists who would come and visual artists as well. It was alive.

Growing up in KC, I was always interested in arts and culture. In my 20’s it didn’t seem there was a whole lot going on here that my generation was connecting with. Once we created that space, I was running into so many people who were feeling the same way as me. Rather than complaining about what doesn’t exist, we started focusing on how we can try to create things.

That’s at the heart of artist-run here, rather than complaining about a lack, artists and poets like yourself just “make the thing?”

That’s what I learned from then, how to develop a personality for a venue/organization. What we wanted for Verbal Attack were people who were coming with something to say. We hoped that people would communicate messages that would resonate with our audience. Some people in the poetry world don’t agree with that approach, but… our goal was to create a space where art and activism could kind of come together. 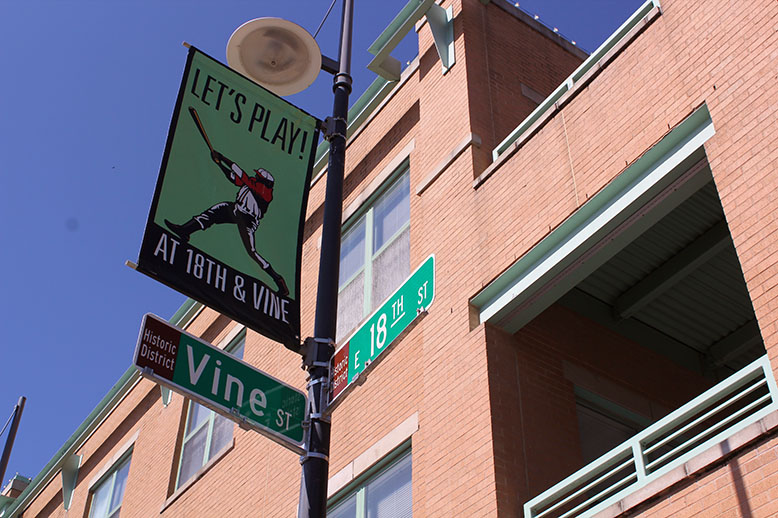 Do you think that is a distinct difference that you see between the Black spoken word communities versus the predominantly white academic communities? That it’s less about the artistry of poetry and existing in the canon versus how the medium is a vehicle for activism, to rewrite history and highlight the emotional place the writer was experiencing?

You answered your own question, I would definitely agree. There are different philosophies. I am intrigued by all different genres of poetry. It became apparent that i wanted more education, and so I started my MFA at UMKC. I learned so much there but I did not find the sense of community I had hoped for and not much appreciation for the style of poetry I was writing. The program was primarily focused on modern and post-modern aesthetics and the Eurocentric literary canon as opposed to the topical stuff that I was writing the I felt fell in line with the Harlem Renaissance and the Black Arts Movement.

For the Black Community and Black Artists in general, it seems to be, more often than not, there is some responsibility to speak to the Black experience of racism, inequality and life as a Black artist. I don’t know if that is fair, because I know there are plenty of Black poets that are interested in focusing on the art and craft of writing poetry. No right answers necessarily concerning which stance you take but I just think there was some pushback against the kind of poetry I was writing at the time. However, let me also say that my writing needed (still needs) a lot of work, the things I learned in the program from a craft perspective have been invaluable and my professors made a sincere attempt to connect with me and to help me grow.

After becoming a CSF Performance Fellow, did your work shift?

It didn’t shift my work, but it certainly made me more visible in the artistic community. I became sought after to work on different projects and started getting a lot more commissioned work and work with other visual artists in town. The generative performing artist that won the same year as me, Tiffany Sizemore, was a choreographer. We did a piece together, and based on the cadence of my spoken word delivery, she responded with dance. It didn’t change what I have to say or my point of view, but it helped me go in different directions I may not have worked with previously.

What are you currently working on?

I want to work on a Jazz poetry anthology that will represent and celebrate KC Jazz. Working on making Louder Than A Bomb, better and stronger, and other poetry commissions. I am also in one of Harold Smith’s documentaries, called The Gospel According to Glenn North. There have always been spiritual themes in my work, and I’m really interested to see where that goes. I have a one-man show I have been toying around with and need to finish getting that nailed down. I also really want to finish my MFA.

From your position, what advice would you give someone becoming a spoken word poet and or starting an organization like Verbal Attack?

I would first encourage them to be consumers of poetry, to read as much as possible, find people you admire and mimic them in some way until you can find your own voice. I think that is critical. Secondly, all of my opportunities have come as a result of collaboration. I always encourage students to find and build a network of people with different skillsets. Finding people who can give you good feedback, you will continue to develop. I am also really interested in how poetry can be inserted in non-traditional spaces. I have been surprised at the reception to my work and how the opportunities have helped to move things forward with my career. 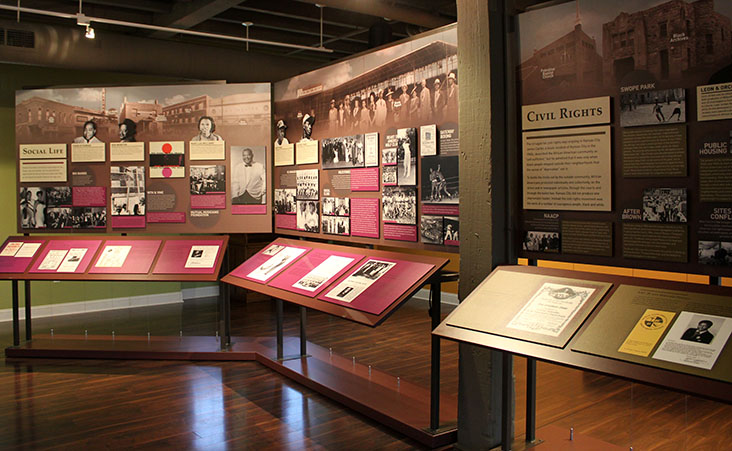 Permanent Exhibition Space at the Black Archives of Mid-America.

Artist Run KC will launch at PLUG Projects on NOVEMBER 12th 2017 from 12-2 alongside their revised PLUG book! Stop by to get a copy of our limited-run publication!