Tom Gregg is a quiet presence in the Kansas City art scene. And like his still life paintings, Tom understands how the art world is manifested through the unification of all its components. Background, foreground and authenticity are all assets of his practice that don’t rely on trick or trend. Like many of the art settlers in the West Bottoms (insert Old West joke here), all the art spaces during that time abide by authenticity and drive. With little to no reliance on external hand holding, simply, the willingness to learn and a place to make work, is all they needed and everything they wanted.

Tom’s own work is a study in classical painting. You can see how the larger cultural oeuvre is the basis for his subjects. There is a challenge to get past the immediate read of these objects. Fruit, glassware, American flags, guns, pills and grenades are all engagements of our societal concerns. Because they are all familiar to us, when we take a more nuanced approach we can better understand the authority in his painting.

With all seriousness of purpose aside, Tom and his contemporaries in the West Bottoms understood the importance of enjoying themselves while making time and space for their peers. They managed to do everything at once and their selflessness allowed for plenty of room to build their own trajectory.

Tell us about your own Charlotte Street Foundation award and your art space.

I received my CSF award in 2000 for $2,000. Not a lot of money but there were six artists who received it. At the time there were no residencies, Rocket Grants, or other awards.  It was all done under the radar, no application. There was a panel committee that probably rotated.  Maybe someone from out of town, too, that always judged.  The community back then was much smaller and more concentrated than it is today. Everybody knew what was going on back then. It was not hard to keep track of happenings. 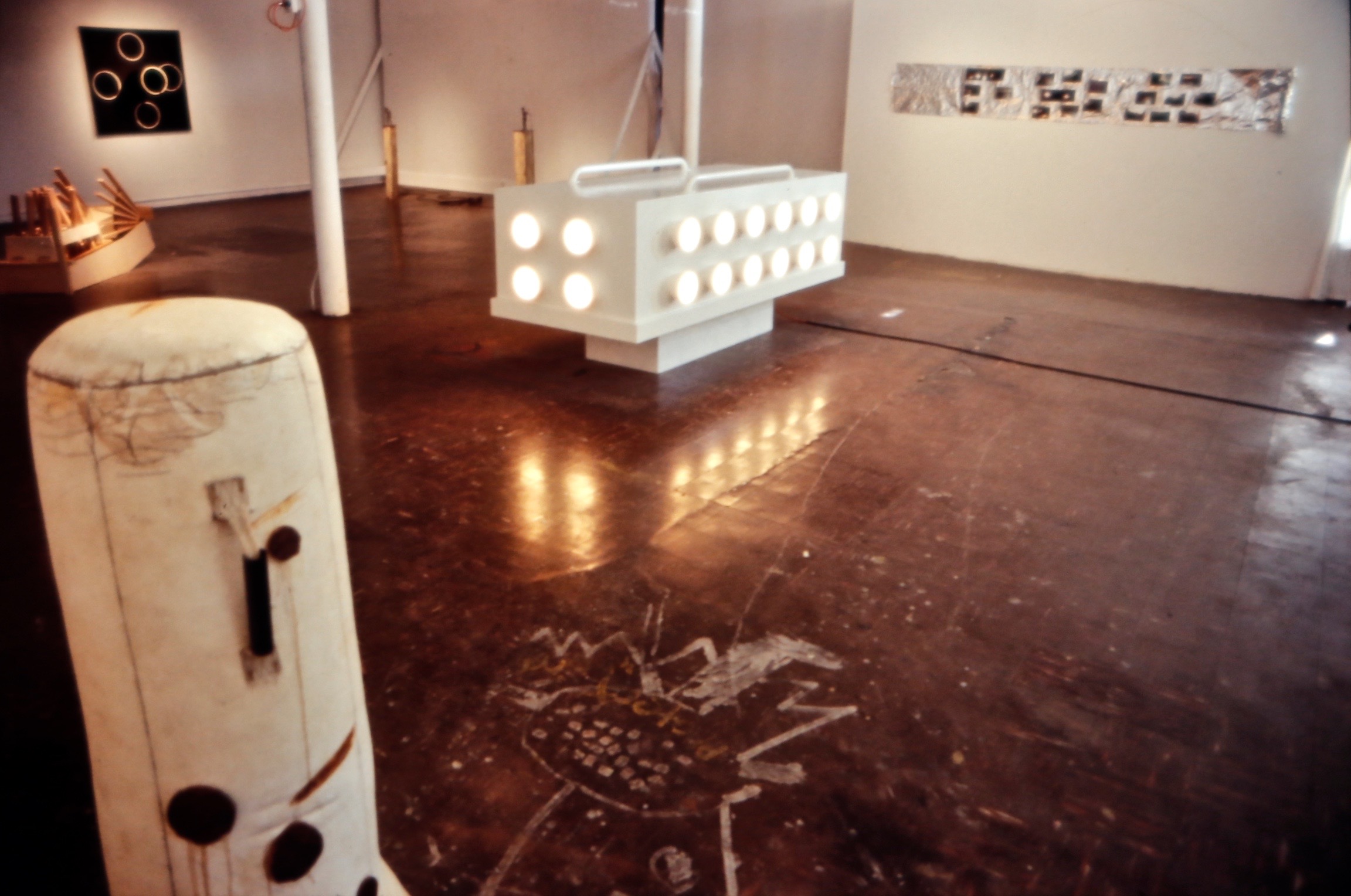 Did people look for out of town money to help?

The alternative scene was concentrated in the West Bottoms and the Crossroads was much more established. Dirt (Gallery) and Fahrenheit (Gallery) were the coordinated spaces. Everyone coordinated on their shows. They were more organized than the Old Post Office. Davin Watne (of Dirt) had a network to promote. That gallery was the home base with huge openings, he would get Boulevard Beer to donate beer; they would shut down the street, sometimes there was a DJ.

Kendall Kerr is an artist that lived in NYC and then moved back to KC. She rented the bottom floor of the Old Post Office. It was never on the circuit along with Dirt and Fahrenheit, at first. Kendall was asked to be and she said no, but they asked me and I said yes. That first show was a big event. It drew from outside the art scene and included all the people from the music scene in KC. Then, a month after, the participating artists said let’s do it again and everyone coordinated. That’s how it started to become an actual gallery. I immediately did another show about three months later.

The entire building was 4,000 square feet. Old Post Office’s front space was maybe a quarter of that, 1000 square feet. It was a really nice space, very big, white walls, the west side of the Old Post Office was mostly big windows. There is some glass block right around the sides of the main door on the north side. There was a front space, a dividing wall, past that a rather cavernous back space.

Originally, Ika (who owned the building) rented to Kendall, who was charging her only the cost for rent. At the time no one cared about the Bottoms. I never charged rent, either. Kendall liked having shows there and eventually she moved out, back to a living space, but I stayed on.

I did everything myself to get the space running. I painted, ran clamp lights. and used award money for equipment and making panels. No other money went into the space. The only thing that really cost money was buying a keg for openings. 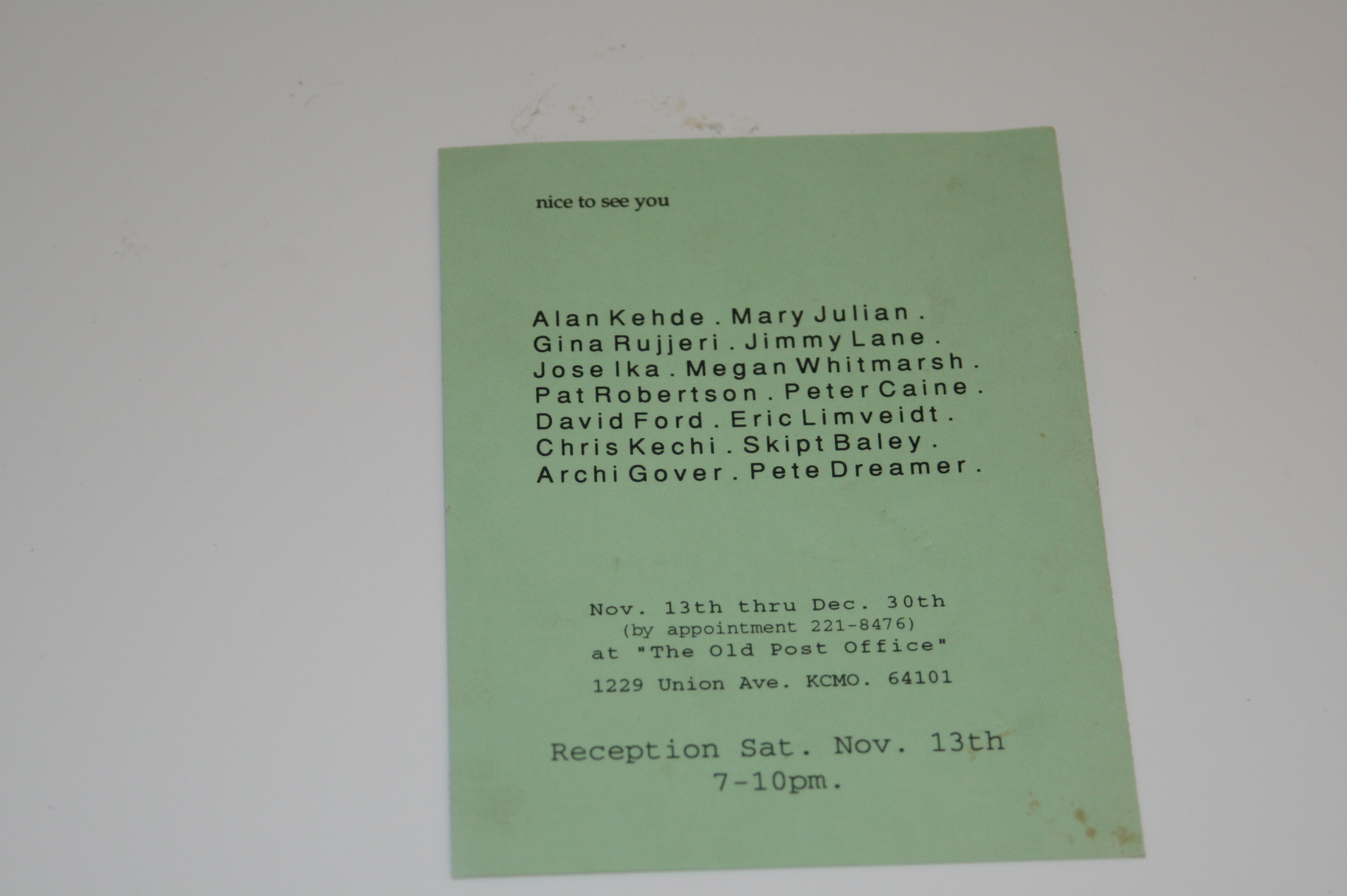 What were some memorable shows there?

There was an annual event: Culture Under Fire, in response to Jesse Helms-era Culture Wars of the 1990’s. (Helms was a five-time Republican senator from North Carolina and a leader

of the conservative movement in America). Anne Winters was a big force in that event. She ran Recycled Sounds record store and was good friends with lot of art people. It was the kick off for Old Post Office to become an actual gallery space. It was happenstance and totally organic.

In September 2001 I curated I Love America, but because of the September 11 attack,  it was postponed to October. A critique of corporate America, it was a show about scale and I showed two panels of a Big Mac and a Whopper. My work had taken a political stance. But it’s so overwhelming; the political situation. It’s a tsunami wave and what are you going to do about it? Not surrendering, but being outraged at the same time. At this point I decided I was going to concentrate on something meaningful and beautiful before it perishes.

In 1999, I went to the Venice Biennale and it blew my mind at how it hung together and the energy that went with it. Selfishly, almost, it gave me the ability to contextualize my own work. Because I would put my own work in the show, too. Yes, it sort of broke taboos, but no one cared if it broke any rules. Overall, it was fun. A few criticisms, but mostly it was nice to contextualize the work in one show; including photography, sculpture, everything. And these shows included David Ford, Andrew Wells, Kati Tovien, Neal Wilson, Mark Cowardin, Ika, Jimmy Lane, Michael Converse, James Trotter and Jennifer Field.

David Ford was painting realist paintings atop traffic signs he stole. Neal Wilson did random plotting of landscapes, tight conceptual parameters, and executed these scenes. Providing a platform (for these artists) rather than showing names, rather than known people that might draw a crowd, still drew a crowd, thanks to the whole scene. We made little flyers, dropped them all over, at KCAI, coffee shops, etc.

Dolphin and John O’Brien (who founded the late Dolphin Gallery in the Crossroads) was an example of someone more established who was showing and supporting local artists, which was rare then. John was supportive of the scene in the West Bottoms, in a general sense, but had no presence there early on. The Dolphin didn’t move down there until 2007 or so, long after The Old Post Office and the Dirt Gallery were gone. And there always seemed to be a divide between the North Bottoms and that area around the Livestock Exchange. 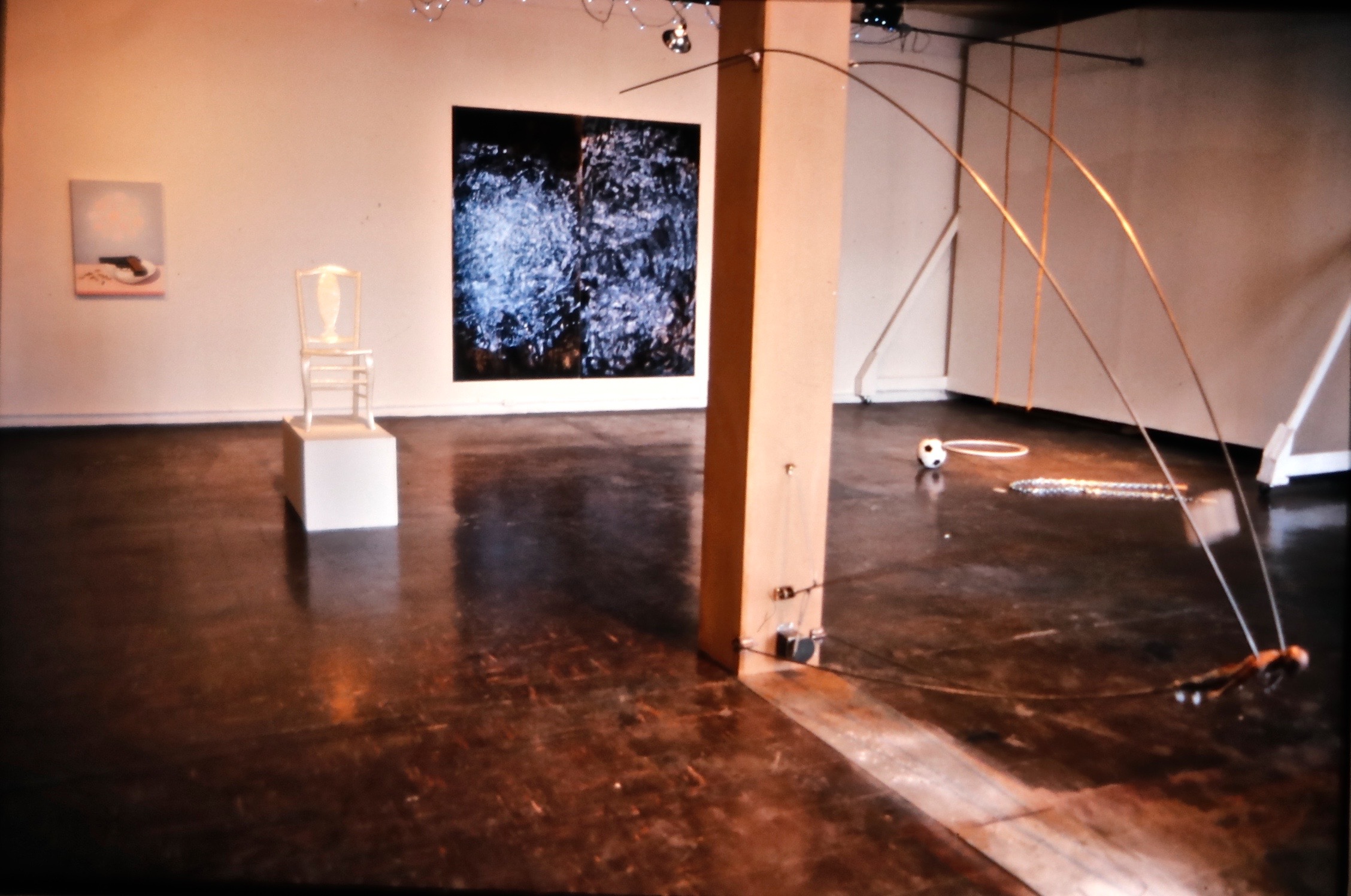 Were sales ever a part of the space’s operations?

Sales? Not really. We maybe sold one or two things. If there was commission, it was very minimal. Over the 3-4 years we had maybe a dozen shows. But they were big shows; large scale installations, with a dozen artists at a time.

Some general rules I had were: 98% of the work shown was all local artists who worked in the Bottoms or midtown, wherever, and I (also) started serving artists who were doing interesting work, but had no place to do it. Dirt Gallery did great shows and they were the big player in Bottoms at that time; it had a more defined focus.  The Old Post Office was more of a salon thing with rotating cast of characters. No one was established.

What was your biggest takeaway from the OPO?

Contradicting myself, no faculty or established artists, I wanted artists being bypassed by the systems I was a part of (having taught at KCAI). Working with Junior and Senior Painting majors, I  told students to find community that you can feed off of and be a part of something.  And the peer group  – not a lot of art infrastructure – was mentioned maybe occasionally. That was the biggest takeaway and how it influenced my own work – more so than showing in NYC. A lot of interaction with others, bouncing off one another, it was a rolling cast of characters. There really was a cross pollination, an energy.

There is today more a sense of having a national presence and that reminded me of a Richard Florida book about city planning, The Creative Class. He handed out free copies of the book in KC. It was about how the arts regenerates cities and is responsible for growth.

What sort of support did you receive back then?

Back then no one wanted to be a part of the art scene, but there were a lot of artists. Mike Miller (the late founder of Kansas City arts publications, Review, Art Tattler and Cupcakes in Regalia) was hugely supportive.  Alice Thorson, art critic at the Kansas City Star, was very supportive and also needed to do feature articles, so the mainstream discussion was scant. Reviews at Byron Cohen or more established galleries; museums were the norm and the Bottoms were the scrappy start-ups.  There was nothing to be gained back then. No goodies, people did it to just do it, to be a part of some kind of energy.  Nowadays people do things for a reason. Before social media, artists did it because it was an energizing experience.

Thinking about grants and residencies might shade how people are doing the work, but there’s no way to take that out of it, and it shouldn’t be removed, but nonetheless…

Was burnout ever an issue for those involved?

Socially, it was the most fun I ever had as an artist! 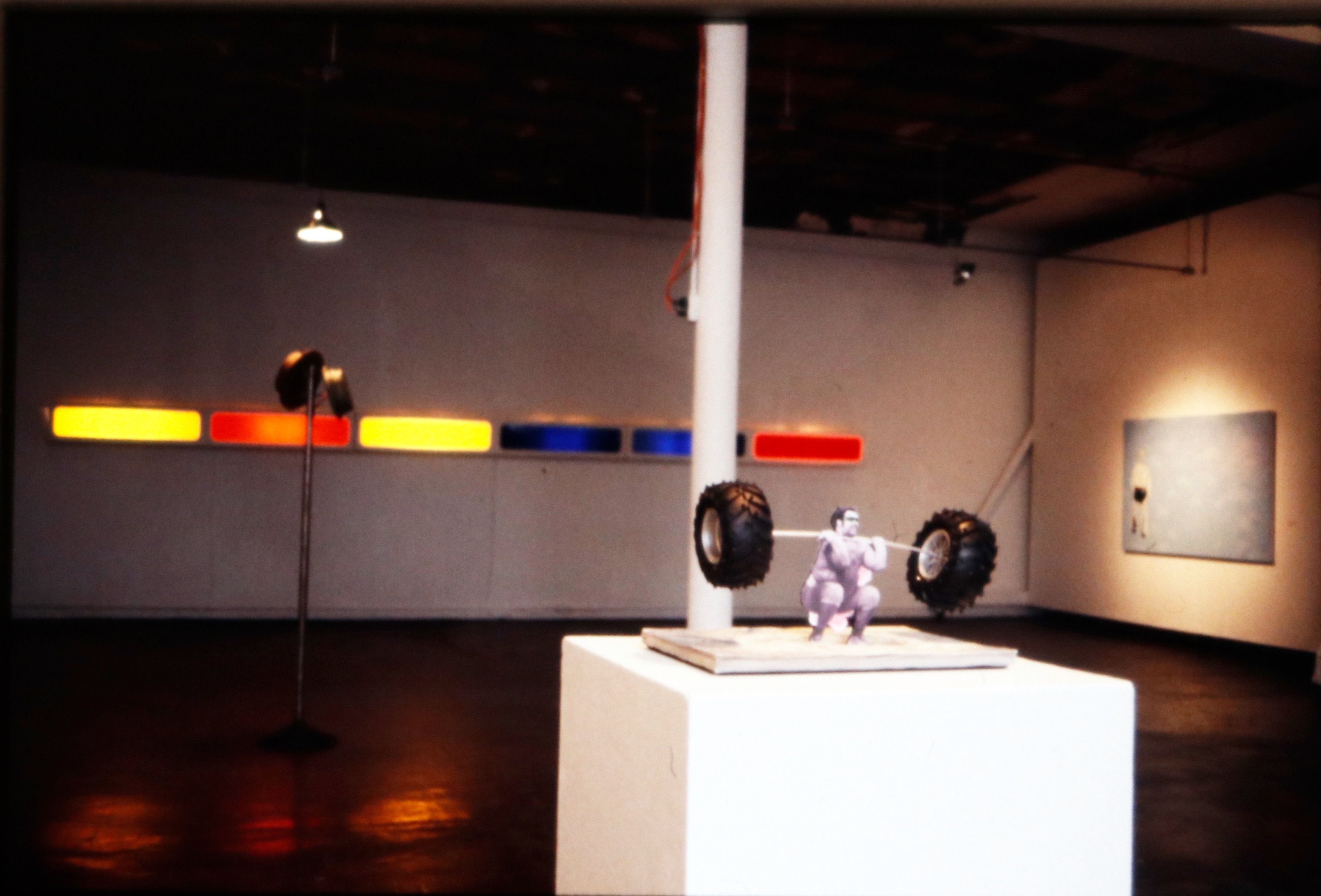