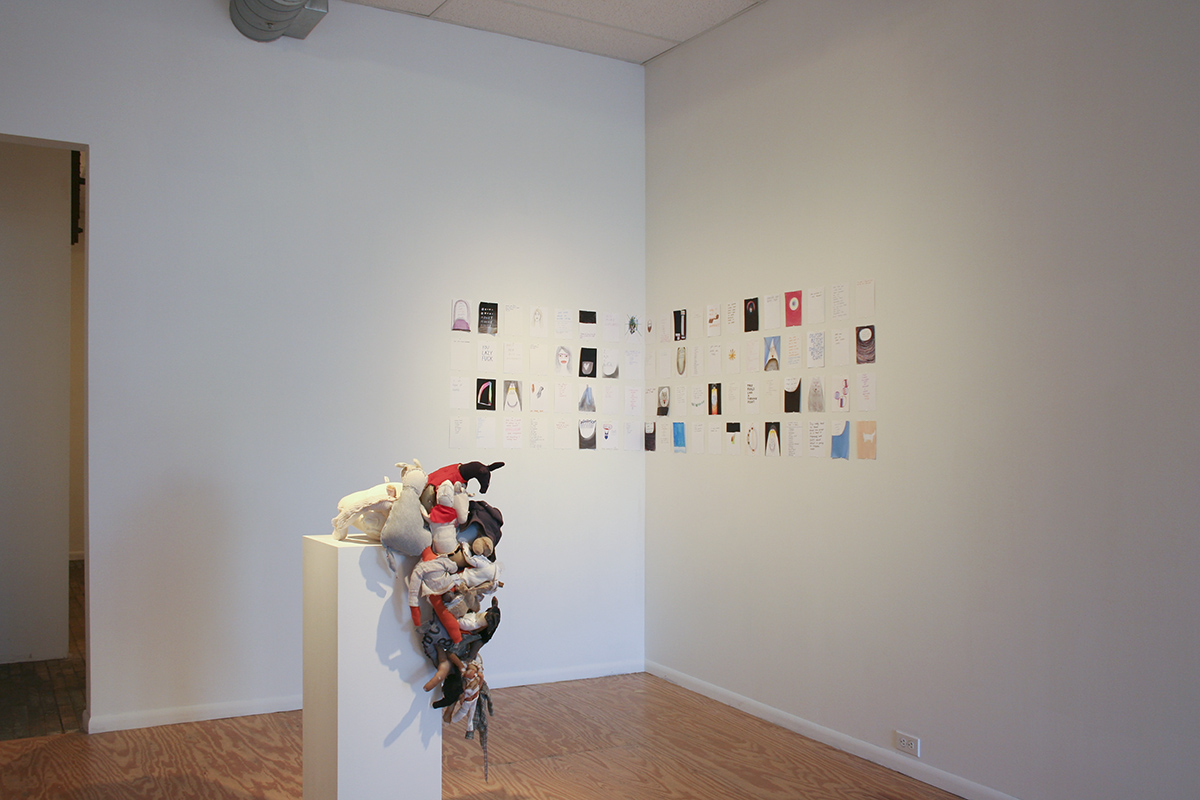 Plug project’s most recent show #Awkward, is exploring the discomfort and uncertainty in human relationships. The context set within the space addresses this thesis well, and seems to go a step further, delving into the awkwardness that can occur in our public/private social media spaces. Often times there is a misconception in what one views as a socially acceptable interaction or performance. In Lilly McElroy’s I Throw Myself At Men, she is photographed at a bar physically heaving herself at strangers she meets via Craigslist. 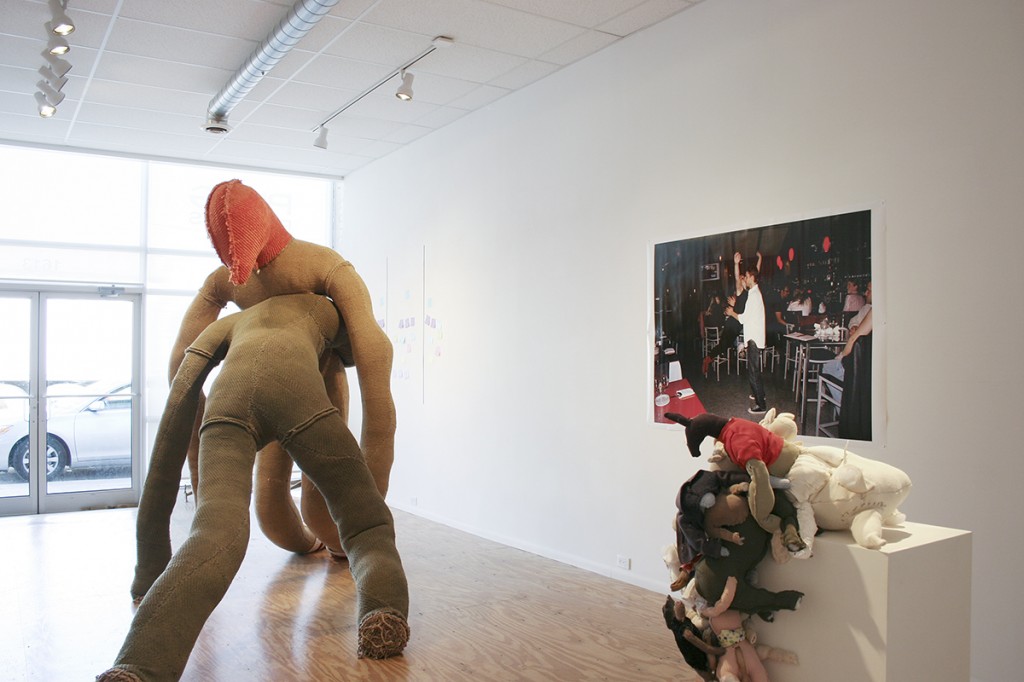 The absurdity in these photographs is comedic, but the underlying value is far more than comedy. When one is willing to meet a stranger from online in person, there tends to be a hopeful exchange of trust. Interacting through a digital means mediates the aggression and awkwardness of meeting someone face to face. People are consistently throwing themselves at each other online in #awkward ways. Sometimes it’s subtle- in instances where someone likes too many of your posts at 2 am- other times it’s grossly direct. When McElroy physically throws herself at these men this aggression is realized and the true absurdity of these online interactions is conveyed. 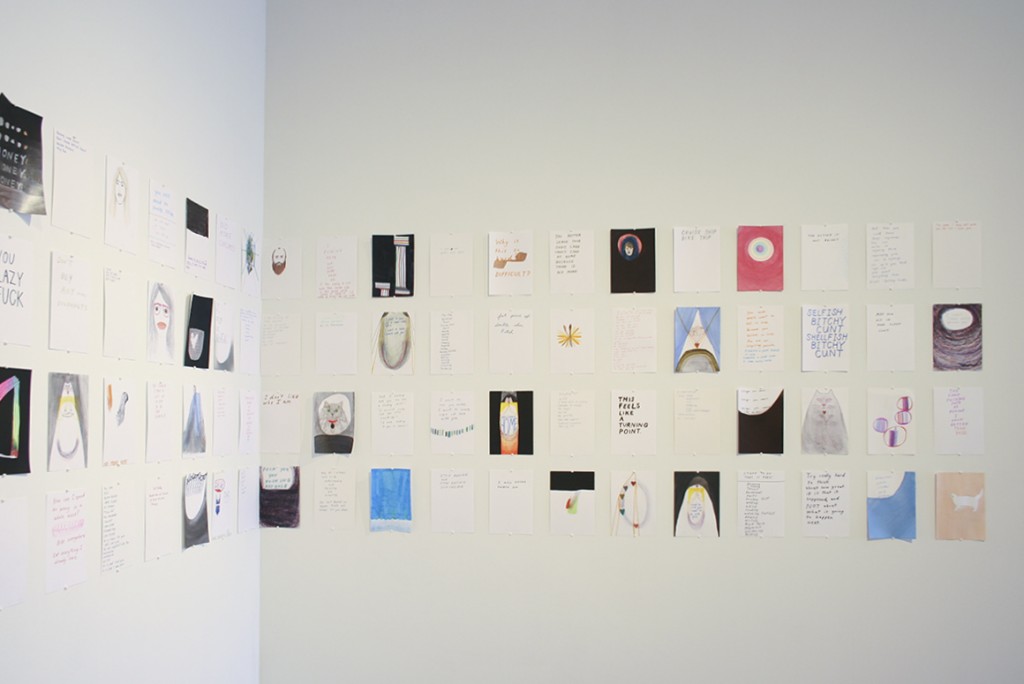 McElroy’s works serve as good headway for Brooke Inman’s Ongoing Series. Drawings & Writings on Notecards. Largely reminiscent of performative Internet art, Inman’s work interacts with a type of dialogue familiar to the internet in a #awkward way. Similar to an artist like Ian Alexander Adams who builds performative web based identity on what they share online. Sometimes what they are willing to share with an open audience is immensely private. Inman’s drawings are on small moleskine journal-sized sheets of paper and hung in rows. They read like hyper-personal status updates written in scrawled handwriting and often playfully cartooned. While the stylistic nature of these drawings are filled with bubble letters and pictures of cats, certain moments reveal extremely raw feelings. These feelings are varied “You lazy fuck” “I want to never use a credit card again.” “Draw plans, Draw Garden, Go to museum” and one poignantly hung next to a portrait of a man “I FUCKING HATE YOU GET AWAY FROM ME. I hate talking to you more than anyone else in this entire world.” They all become a very honest cut-and-dry analog for a Facebook timeline.

Near her work is Lee Walton’s Facebook Birthday Videos for Friends I don’t Really Know. As the title explains, Walton finds friends of the Plug Projects Facebook page whose birthdays happen to fall during the duration of the exhibition. From there Walton creates his videos, often filled with details found via the strangers’ Facebook profile. Walton will appear in the video at someone’s high school, wearing a t shirt of a band they happen to like, or utilizing one of their profile photos to create memorabilia that fictionally exists between Walton and his selected birthday wish recipient. This particular piece points out how strange of a gesture wishing someone ‘Happy Birthday’ via Facebook actually appears. Whether out of genuine happiness or some strange obligation, this work explores the generosity found in these well-wishings. In a way #Awkward comes full circle here in a space that we can view these types of work in a context of absurdity. 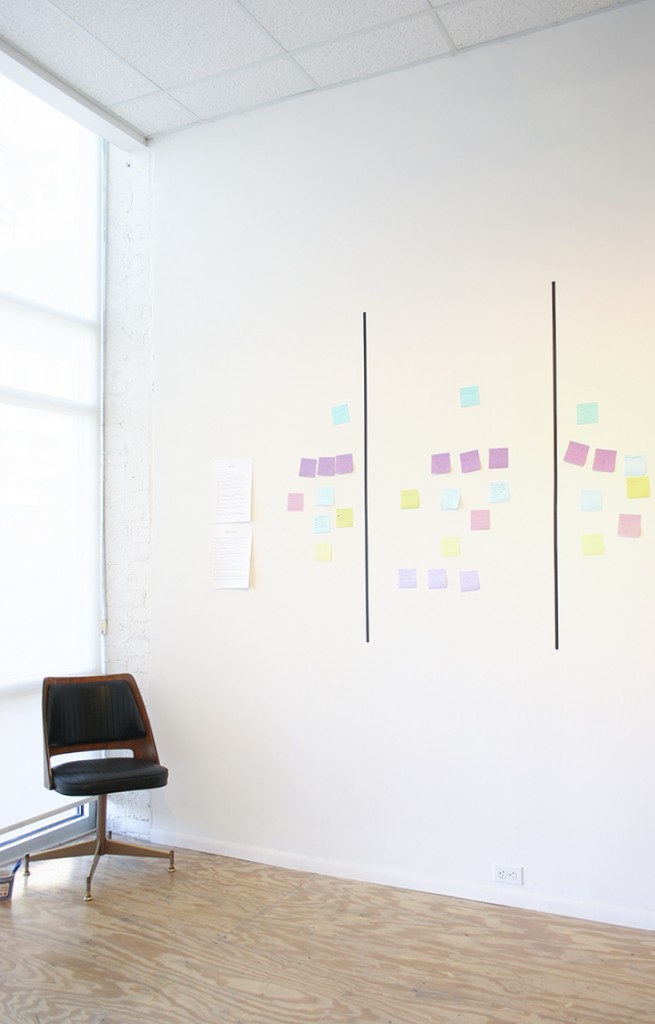 In opposition to the nature of the previously discussed pieces, works by Eric Conrad and the Live Life Coaching performance by Andrew Dickson are about #awkward things we typically bury far under what we are willing to share. Dickson’s life coaching performances ask audiences to participate in what essentially was active listening and guidance. During a Saturday performance of one of these public coaching sessions – an idea that seemed precariously dipping into a realm of oversharing similar to Inman’s work -was conducted in such a way to develop an empathetic relationship with the person being coached. It’s interesting how through the ways in which content is presented one can alter a conversation that would otherwise be #awkward, into one that is essential on a human psychological level. 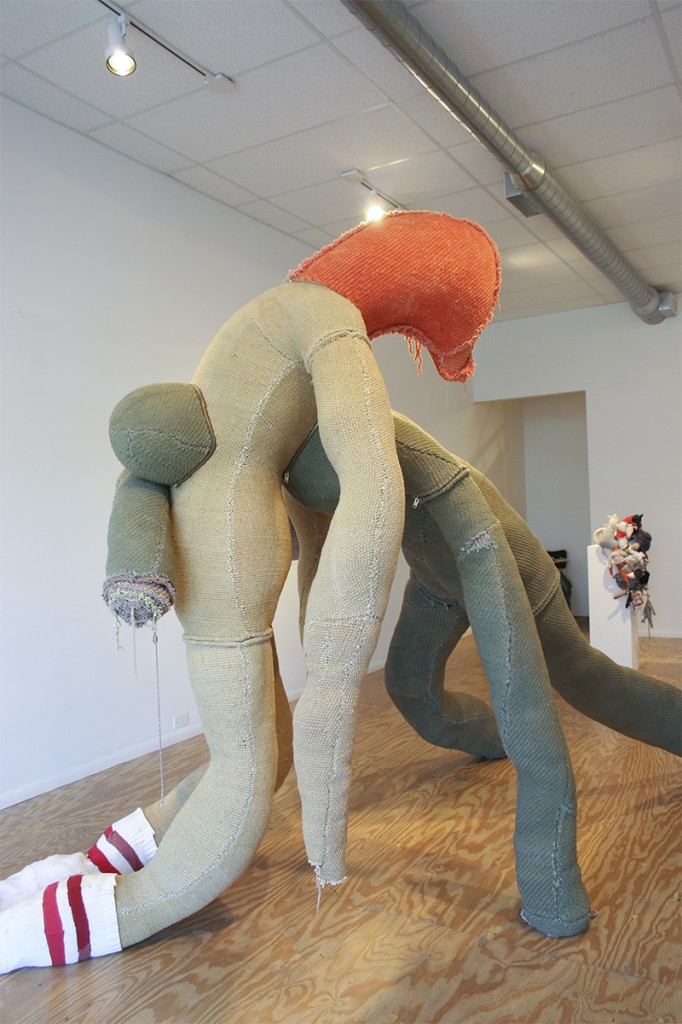 Installation image of The Dependent courtesy of Plug Projects.

Ending with the elephant in room: The Dependent by Eric Conrad depicts two figures leaning on one another in a larger than lifesized mass. The construction of the vertically woven neutral beige and olive green fabric, contrasting the orange chenille, add to the representation of a relationship in distress; one figure’s head zippering straight through the other’s chest. At times when we over share we become dependent on each other, or on a crowd of anonymous “friends” to validate and legitimize their feelings for us. Turning the audience on its head, the size of the sculpture works as great cultural commentary for how our relationship with social media, our online personas and our online-only friends affect us. We can watch “likes” rack up, see what Google Analytics or Klout might think is the best type of post, but really, Eric Conrad’s piece is a metaphor for how that in and of itself can be an issue.

Culturally we are becoming more aware of how social interactions presented in a public forum are directly affecting our personal and emotional lives. Sometimes these interactions reach a point that is #awkward. Plug Projects put together a small exhibition that tackles larger ideas about the dichotomy of our online and offline social relationships and the affects they have; for better or worse.

This show, along with another

fantastic show by Mike Erikson is on view at Plug Projects through October 25th 2014. Their gallery hours are 10-5 on Saturdays. You can find out more about the artists and exhibitions on Plug Projects.com and stay tuned to their Facebook page throughout the duration of the show to see more videos by Lee Walton.