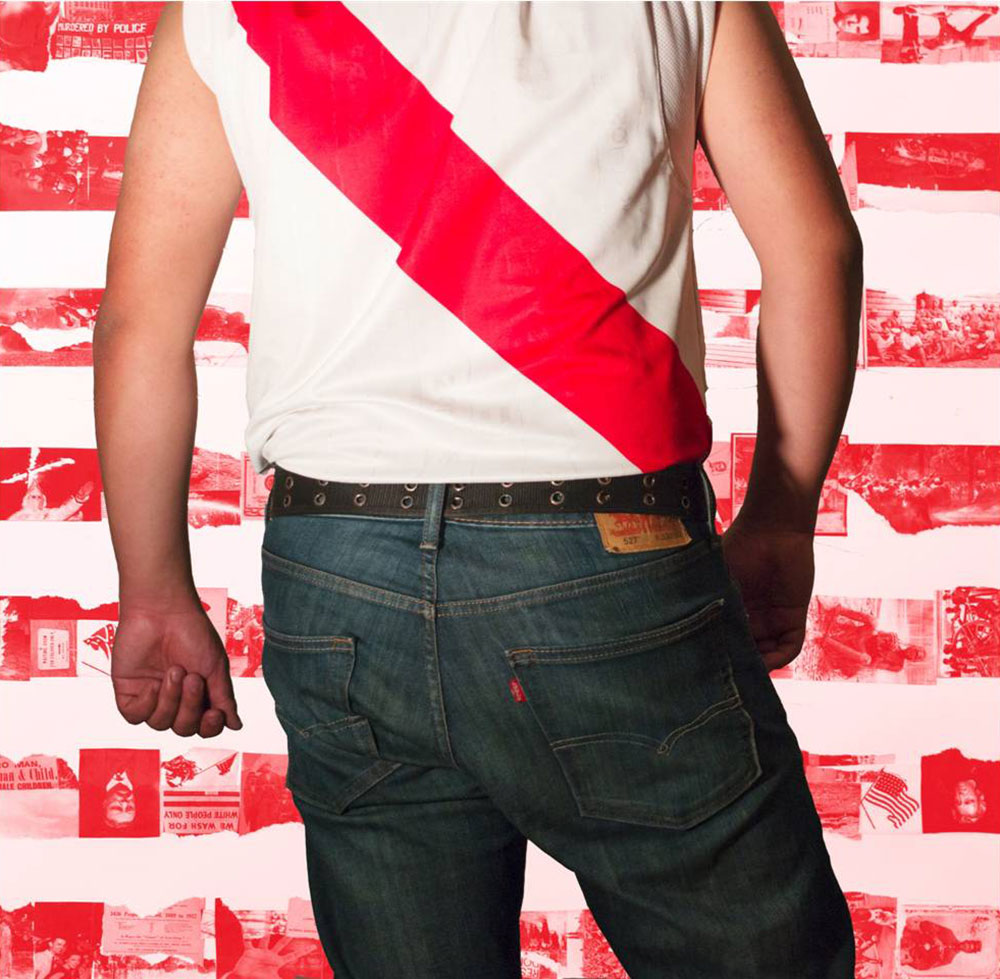 Carlos Ortiz-Gallo on Memory and Loss in Immigrant Narratives

Mary Kuvet talks to Kansas City-based artist Carlos Ortiz-Gallo about the loss, longing, and frustration of the immigrant experience in the United States the he depicts in his prints and collages.

Carlos Ortiz-Gallo is a Peruvian-born and American-raised artist who utilizes methods of collage, printmaking, and photography to create work that pulls from a personal narrative of family, loss, immigration, and remembrance. When I first encountered the work of Ortiz-Gallo, I felt as if the work was taken directly from a memory itself. In his work, the physical action of tearing and piecing begins to build a language of loss, disrepair, and familial complexities. The integration of prints and old family photos create a unified world through palette and tone; much like how a memory can become embedded with a certain mood or sensation. At the same, time the layered and hard edges of the collaged image begins to personify and reveal the complications of the family figures central to the work. In Ortiz-Gallo’s hand colored lithograph Sole Sacrifice, an aged photograph of the artist’s family rests on top of a metal fence as a young child opens his arms to display the phrase “all mixed up” with drawn circles emanating beneath the words. Beyond the family lays religious imagery, reference to mythology, the addition of a white baby, and text that states “I am a symbol of hope,” and “call for help without saying a word.” These elements work together to bring the artist’s narrative to life while leaving space for a viewer to understand, empathize, or project their own notions of identity and experience.

MARY KUVET: Your work pulls from personal narrative, at the same time it extends to larger narratives of family, absence, immigration, and loss. What is the role of memory in your work? Furthermore, how do you approach research in your practice? What is the relationship between memory and research; the subjective and the objective?

CARLOS ORTIZ-GALLO: I equate memory as having the role of “liberator” in my work. As I researched what I understood as a troubled family history, I unearthed painful and traumatizing sequences that had thus been suppressed or forgotten through the years. I forced myself to face and analyze these moments. By reaching back into my memories, I felt there finally was a way that I could confront my identity and where I came from, without flinching. I’ve allowed myself the opportunity to comment and interpret different moments unapologetically and that action itself is an unburdening of years of identity crisis, frustration, and anger. In one of my earliest lithographs titled First Impressions of Life, I collaged a text that read “Keep your memories safe” and I began to deal with these concepts. From this point, a dwelling process took place that allowed me to break loose and embrace my past and its impact.

The work I’ve produced is a marriage of research and memory. My research consists of uncovering memory, and therefore, I consider both ultimately becoming one in the same. It consists of digging through dozens of family photo albums and letters, as well as interviewing various family members about a particular event, situation, conflict, etc. Then, the photographs I work with are not chosen at random since each particular image triggers a specific memory related to the event or to the people depicted in the photographs. Furthermore, I follow my instincts and have looked for answers in the dwellings of my home, while also found inspiration in artists deal with similar concepts of family, as well as themes of loss and separation. In particular, the works of Felix Gonzalez-Torres and Jennifer Loeber are a guiding path of grappling with this subject matter. In the end, I use the research material as the actual work, and the collaging is an interpretation of the image I chose and becomes a personal vocabulary.

MK: In your collage work you often use the interplay of text and imagery to establish a kind of message or mood within the work. It seems like you constantly collect excerpts from print. How do you approach finding text? How do you decide when a text resonates or is right for a work?

COG: Collage is a medium that feeds off the intuitive and “gut driven” decisions the artist makes. With text, I try to place it in a setting where its interpretation changes. Because a lot of my material comes from newspapers and magazines, the content of these have particular moods or perhaps agendas foreign to my prints. The text chosen usually comes from a product advertisement or its promotional slogan. And, sometimes it comes from a dialogue being held by two characters within the magazine. The text, now removed from it’s original context, takes on a new meaning.

Since magazines and newspapers usually have an excess of text, it’s usually not difficult to find material that can be double entendre or have a somber meaning, once altered. For example, in the piece Dead Flowers, there is bold text on the bottom left of the print that reads “Life doesn’t have… to be this hard”. The text was originally pulled from an advertisement selling a cleaning product meant to facilitate living space and quality. The print depicts my mother—who had recently started residing in Miami, FL—in a park having her face painted by a clown. The clown paints tears on my mother, resonating her sentiment that “life doesn’t have to be this hard.” This is one of my favorite moments where juxtaposed text serves a dual purpose.

Struggling to sustain my brother and I as a single mother, her early life in the U.S. is marked by working tiresome overnight hours at a factory and sleeping from in the morning (when she clocked out) until we got out of school. This memory was of a rare instance in which she had enough energy to take us out to enjoy a day at the park. Several doors with large kitchen knives behind it are in the background—symbolic of my mother’s strife, as her attempt to open new doors for a brighter future were filled with surprises, some unpleasant, and a painful reminder of what it was like to try to make it without much support. And the cardboard trash-looking box, to the bottom left of her, titled “Wedding Photos,” symbolizes the failed relationship between my mother and father. 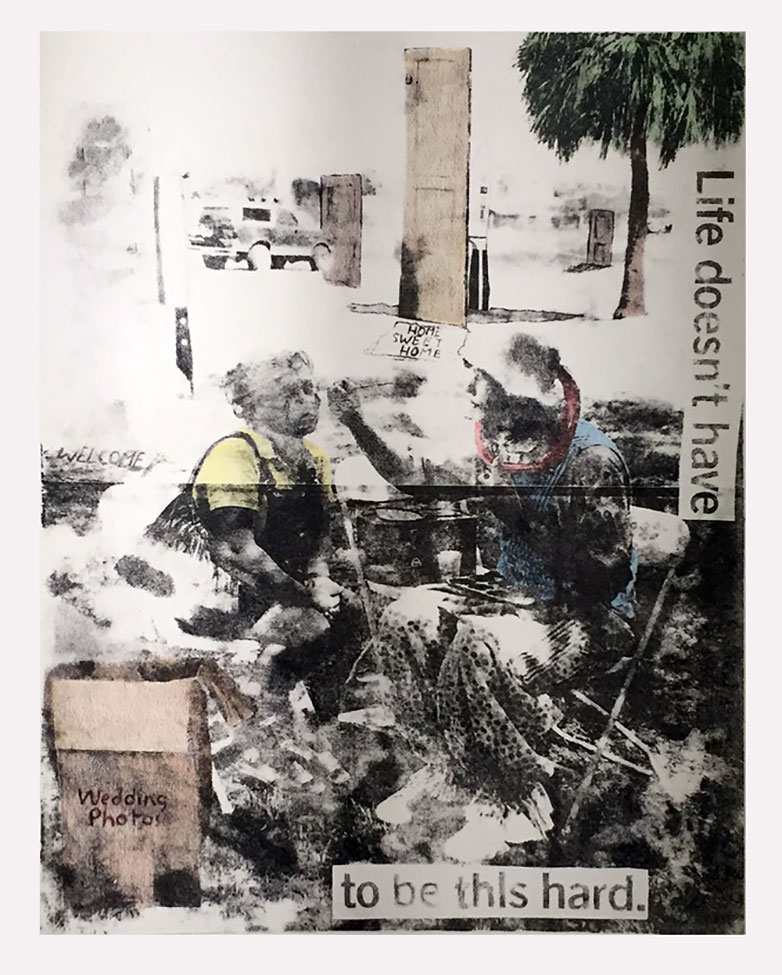 MK: From looking at your work it seems that the physical process of collage, (i.e. adding, subtracting, or abstracting an image) directly relates to the conceptual underpinnings of the work as well. Could you expand more about this process and how the physical nature of the work supports the ideas that you work with?

COG: The use of collage in the photographs implies the fragmented, torn, and “pieced-together” lifestyle that I confronted. More broadly, collage is a means to build a visual vocabulary drawn from the different elements of everyday life that I tore from—to cope and replace the absence of a traditional family nucleus and upbringing. I see collage as a physical, almost violent action. The tearing, cutting, and pasting inevitably becomes part of my aesthetic and process. I equate the physical action of ripping and taking away with the notion of being removed from a place of comfort. Once I’ve transferred a collage onto a stone’s surface in the lithographic printing process, I further manipulate the images and I am free to keep adding and removing throughout the process. With an image on stone, I am able to grind away and “deteriorate” the aesthetic of the prints. This choice of fading or washing the image out, speaks to the blurriness of the moment being depicted, which have become hazy and diluted as time accumulates. 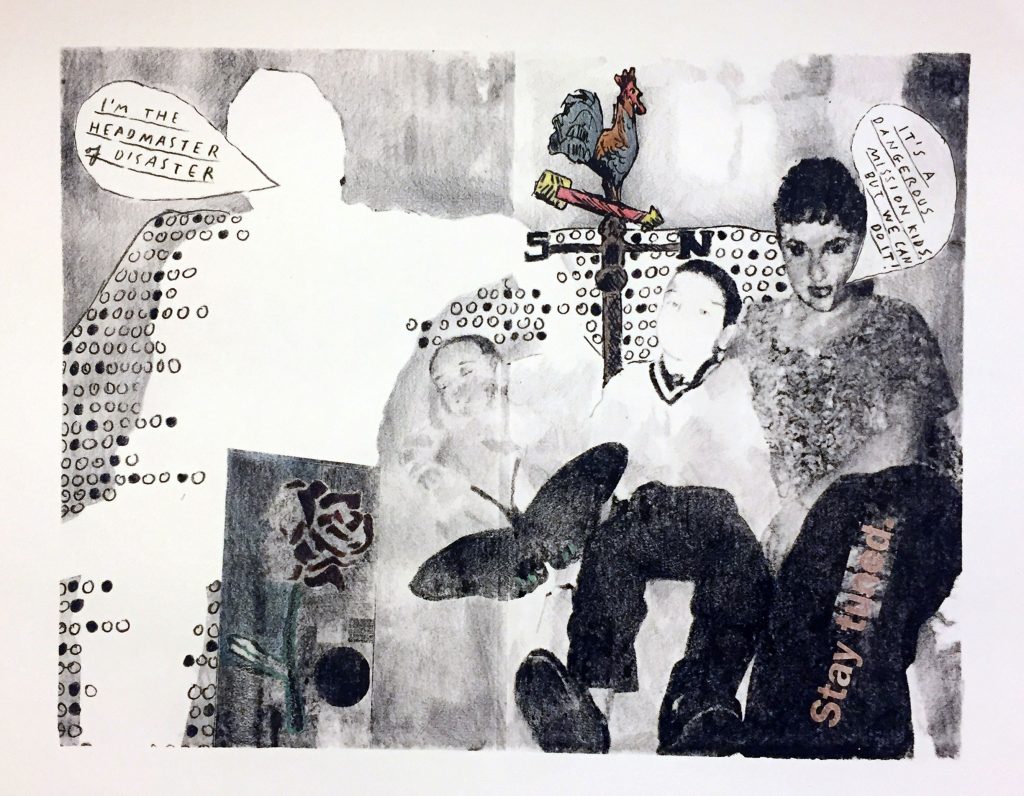 COG: For the exhibition, I plan to explore the journey, both physical and psychological, that are part of what constitutes migrating and relocating. I’m creating a collage with old prints in the shape of a train, which has vast connections to concepts of travel, linking cities, transporting goods, as well as escaping and fleeing. In essence, the train itself becomes symbolic of the way many immigrants enter the U.S. I parallel the train with my psyche. After arriving at the U.S. at the age of seven, undoubtedly this transition of setting altered to my childhood. There are so many memories, thoughts, and ideas that I filtered out, either because of the pain they caused or their unimportance to my survival at the time. My early years here in the U.S. are marked by a string of suppressed moments that would sometimes manifest themselves later on, through anger or frustration. The train will be filled with the collage elements I continue to work with and they will exist in and around the train, mimicking passengers aboard the vehicle. Along with the train I plan to include train stops, in which “passengers” embark and disembark.

This train will be built from the ashes of my old work and I’ve begun to repurpose old prints to help me with this project. Though this new piece talks about a broader pattern of experiences that differs from the personal work I’ve made, I feel that family and memory still play a huge part in the immigrant experience. At the heart of my recent work still lies the themes I often work with, and I use them to speak about in a broader and far more accessible language that still reflect my inner thought process and identity.

This interview was edited and commissioned by the 2016-2017 Charlotte Street Curator in Residence, Lynnette Miranda, in collaboration with Informality‘s for Issue 2: Digital Studio Visits and the exhibition at la Esquina Gallery (1000 West 25 Street KCMO) open from November 18, 2016 through January 7, 2017. This interview was originally published on http://collectivegap.info/