Etta Sandry takes a microscopic view of the concept of culture in the work of S. E. Nash

While listening to an interview with the artist S.E. Nash and other fermentation enthusiasts on an episode of KCUR’s program Central Standard, I was struck by the use of the word “culture.” Taken from the Merriam-Webster English Dictionary online, the definition of “culture” in a scientific context is the act or process of cultivating living material (such as bacteria or viruses) in prepared nutrient media; also: a product of such cultivation. In the terminology of fermentation, this is the “starter”: a portion of food or nutrient substrate—wheat in a sourdough starter, for example—that has been colonized by bacteria that will enact the fermentation process. 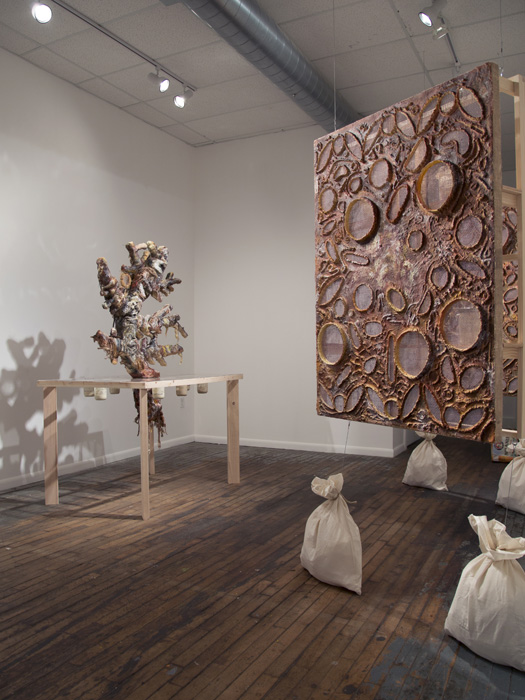 “Culture” is more commonly thought of in a social context, where the meaning refers to the development of human knowledge and the resulting beliefs, behavior, and social practices that are enacted to share and preserve that knowledge within a group. Both uses of the “culture” originate in its Latin root, “colere” meaning to tend or cultivate. The original use of the word referred to a knowledge of the land. As human history developed, the contextual meaning expanded to include the cultivation of the mind.

S.E. Nash’s work investigates culture through all understandings of the word. Beginning in 2015 with a show titled They/Them/Their, at Black Ball Projects in New York, Nash began incorporating micro-organisms and fermented foods in their work. Amorphous sculptures made of paper maché, burlap, and paint housed glass vessels of fermenting foods including kimchi and kombucha. Each sculpture is created with the specific fermentation vessel in mind and the color, form, and shape are informed by Nash’s interpretation of the spirit of the microbes in the food fermenting. Wall works such as An Incomplete Index of Bacterial Morphology gave the viewer an enlarged visual abstraction of a look under a microscope. Members of New York’s fermentation community were invited to leave jars of their personal ferments on a shelf in the gallery for the duration of the exhibition and Nash hosted programming around the process of food fermentation from initiation to consumption.

These workshops, meals, and demonstrations are now a regular part of Nash’s work. The artist’s recent solo show Lactobacillus Amongus about sourdough bread at Plug Projects in Kansas City culminated in a bread bake and community potluck. These events stage the gallery as a site for inquiry and knowledge sharing while inviting people from across disciplines to come together to cultivate a new community of artists, fermentors, and others. 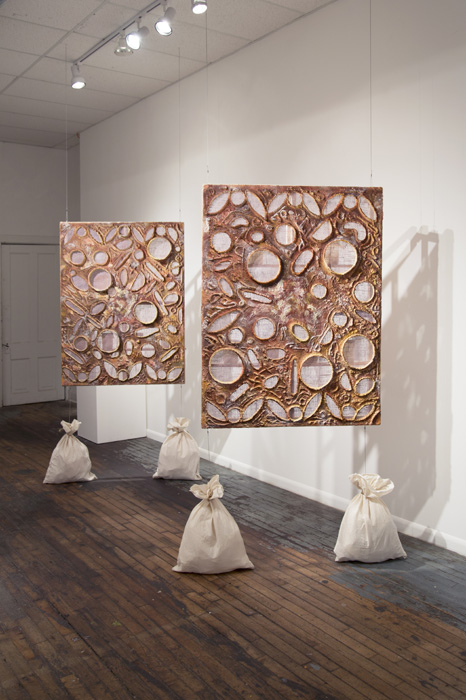 In this work, worlds of culture collide. Cultures of microbes are actively fostered and cultivated throughout the duration of Nash’s shows and new networks of exchange are formed through the outreach and events that take place within the exhibition. Through researching the history of fermentation and by interpreting microbial activity, Nash’s work also explores human culture and social behavior. As a non-scientist researching microbiology, there is a tendency for Nash to personify the micro-organisms, even referring to them as “collaborators” in the work. For the artist, understanding the microbes becomes a way to “unpack how we relate to the idea of life” and a meditation on aspects of human behavior such as relationships, gender expression, symbiosis, reproduction, social networks, and group dynamics. Nash’s fermentation-themed work and related events invite participation into this cultural inquiry.