Every Time I Go Outside the World Is Different by Caitlin Horsmon, 5 projector expanded cinema performance, 2017

“It is not necessary to create a world, but the possibility of a world”

What might you do if suddenly the walls of your beloved home began changing? Expanding and contracting, breathing and bleeding, altering without any sense of reason? In Caitlin Horsmon’s work Sense of Place, she creates an immersive video installation that works with these ideas.  Interested in merging reality with fiction to create experiences, Horsmon examines the idea of place through theatrical gestures within spliced video footage. She transforms place into space and back again exploring their histories and the objects they hold, altering their architecture and highlighting their quirks and imperfections.

Superlinear Living by Caitlin Horsmon (2015) from The Center is a Moving Target at the Kemper Crossroads. Image courtesy of the Artist

Like artists before her, Horsmon highlights the visual and emotional relationships developed between the domestic space and its occupants. The histories embodied in the home and the interactions with the bodies that inhabit them rise to the surface in the artist’s work. In a way, the work is in conversation with Gordon Matta Clark’s building cuts into domestic spaces. His work would highlight the textures and layers of the space—exposing what lay underneath while also creating a new history to a space before it was demolished.

In Horsmon’s work, utilizing a hybrid of found and constructed footage and sound, she also adds to the history of the space by projection. In Sense of Place, her space is created through the combination of installation and video. The gallery wall is no longer perfect—it resembles a living organism with bulges and fissures. The footage is spliced and stitched together. The content is familiar—images from a freshly finished home makeover television show juxtaposed with scenes spewing the heightened awareness of a horror film. Details from wallpaper patterns and elaborate molding glide across the wall and occasionally fall into place with its new shape. At certain times, the artist’s body enters the frame—adding an additional architecture to the work. “Houses hold memories—what these are and how we remember them are variable and impacted by storytelling, documentation and time.”((Caitlin Horsmon’s statement for her work _place _plateau))

The work elicits tension and nostalgia simultaneously. Through creating these installations filled with potential, like Matta Clark’s building cuts, Horsmon introduces the possibilities of deconstructing reality by transforming our consciousness and the way we perceive our world. 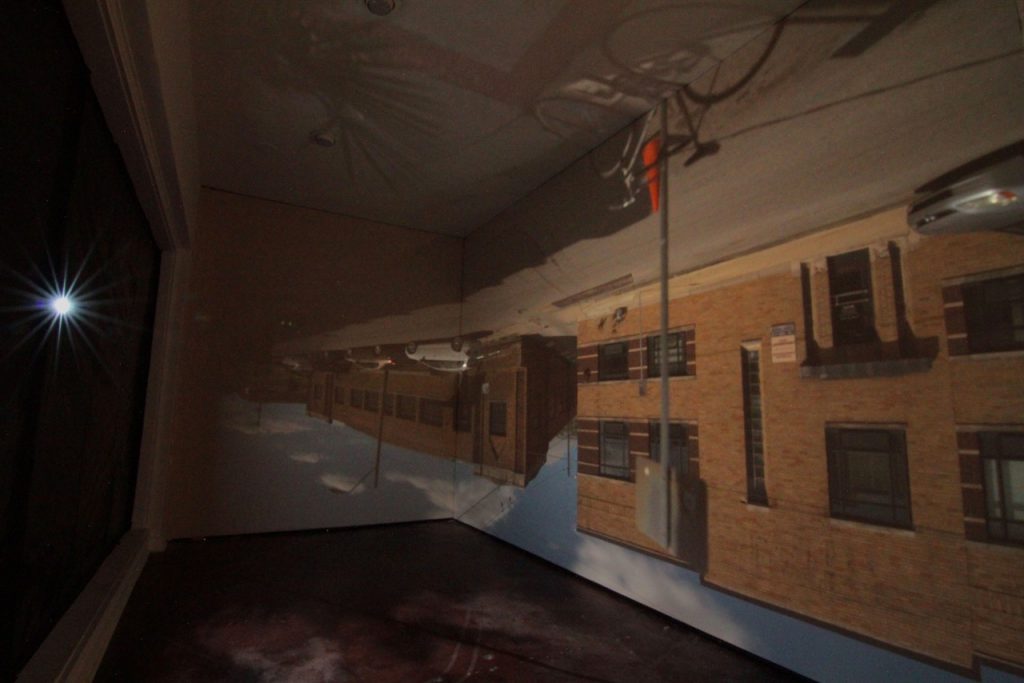 Installation shot of Practical Optics at Front/Space by Caitlin Horsmon, 2016