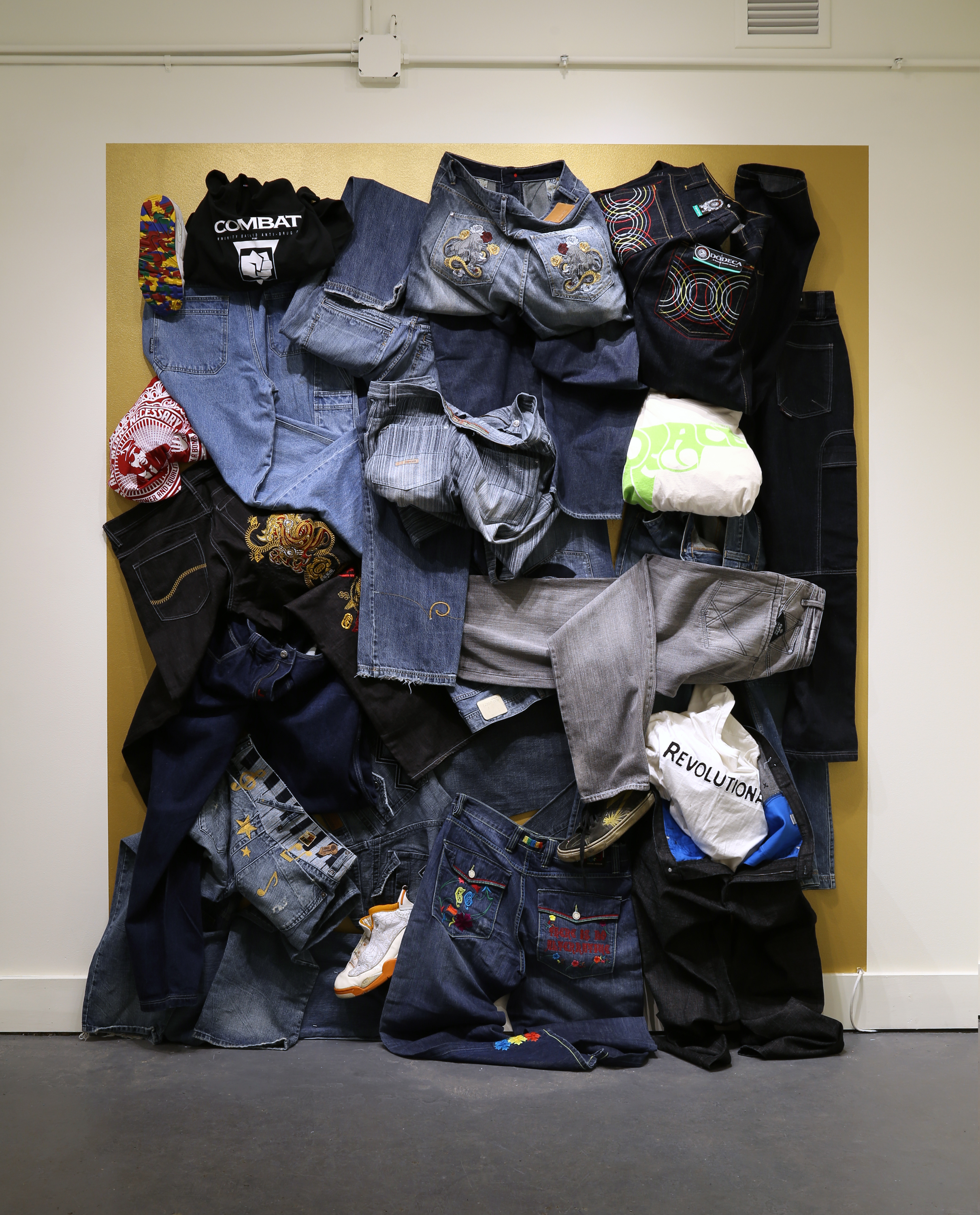 Denim is a baseline of modern history. As much a part of the Western canon as television or sugar, it is the underlying current through which trend, comfort, work, protest, and desire runs. A clothing option that is strangely idiosyncratic as it transcends racial and class lines, its branding pivots between affordability and aspiration. A microcosm of the history of denim as an anti-consumerist activator is on view in William Toney’s Social Fabric at Kiosk Gallery. In a collection of photography, installation, and hats layered in shredded money and “blunt guts.”

Like displays in Gap stores around the globe, the prints and his denim installation, Jean Wall (2019, denim, t-shirt, sneakers), has a whiff of commercialism in its almost finicky neatness, as something that trends towards transactional. The very first encounter presented is the backside of a shirtless young man in saggy jeans that appears as an advertisement for cool (Sagging (Akademiks), inkjet print, 2017). Nevertheless, in this gallery environment, viewers have double-duty in discerning what lies beneath the ordinariness of display — the idea of being a revolutionary means wearing the guise of the working class.

The protest starts in the grape field, on the back of the bus, in front of the bodega. What is most attractive about Toney’s selection jeans is their back pocket stitching. Not immediately recognizable as Levi’s or Wranglers, but a more involved role in denim’s history, where the wearer and its purpose unite as task and performance. Even though Toney is using his jeans collected and stored over the years (some still with the original tags attached), its reflection on himself is a mirror to the culture in which he exists. He is managing its implication in a broader social sense of his personalized branding. Those older than thirty can see this as a chapter in a history book: How We Dressed for the Branded Revolution: Aughts Edition.

Toney avoids condemnation of any visual language. Personal interpretation is the point. That is what is enjoyable about this; the lack of knee-jerk reaction; Toney leaves abundant space to argue the points he presents. Furthermore, there is no penalty – or being canceled – in less formal parlance, for doing so. It runs alongside the concept of denim as a larger cultural image. Its cut, form and fit are now an almost universal language for signaling status or presenting an ideology.

Recently, there is a conversation concerning the de-gendering of fashion from writer, performer and speaker Alok Vlad-Menon. Their Instagram posts are posed in feminine clothing, makeup and accessories while clearly not willing to compromise their hirsute maleness. While Alok’s work strongly and successfully advocates for trans awareness, their theorizing is sometimes overly written as to be critique-proof. Nonetheless, there is something to be found within their images that runs alongside the revolutionary spirit denim arouses. It might be difficult to find Alok wearing denim, the idea of existing in the abstract (without the demand for complete cooperation) highlights the urgent need for dialogue and disagreement, as is the temperment seen in Toney’s work.

In full, Toney’s tableaux on the wall, along with its accompanying prints and customized hats, Toney shows the off-brand as the right culture warrior. The body itself is the ultimate rebellion; how its used, abused, and ultimately changed in the way we dance, dress, protest, and fuck. The clothing stakes no high moral rhapsodizing like Vlad-Menon’s quest for de-gendering fashion, when, in fact, what Toney shows us is exposure being a form of window dressing.

Supporting this is the abstracted way in which Toney presents these pieces of denim (Pants 2, Pants 3, inkjet print, 2019) are displayed. He provides the viewer with an open interpretation of how denim is both a clothing choice and a tool when there is work to be done. Looking up close at these images, we see the construction and how delicate its intricacy appears. This durability discloses a metaphor for a well-worn, and worn-out, working-class making their existence desirable to many. Conversely, the lived-in aspect of many denim items is also seen as a symbol of leisure. Clothing sold right off the rack, looking as though it has been through fifty winters and fifty summers without the sweat that produces such a look is a privilege ne plus ultra.

Within Kiosk Gallery’s limited space, Toney chooses a formal presentation that supports the casual nature of this fabric. He also presents a trio of baseball caps (59/50 {covered in money, New Era baseball cap, shredded money and 59/50 {covered in tobacco), New Era baseball cap, tobacco, both 2019) fully covered in shredded money and “blunt guts,” i.e., the insides of Phillies brand cigars, a commonly recognized delivery device for smoking weed. These items, getting high and money, maintain the casualness of social algorithms that are as much of Western culture’s social fabric as denim itself — many flights of protest and social agitation borne of these items.

Denim can quell up a revolutionary response or celebrate the self. Levi Strauss, the original manufacturer of denim, was a master of dichotomies. The overall takeaway from this work is most of us make choices where our response is based upon where we stand on the consumption hierarchy.

Toney’s choices recognize their symbolism while giving enough room to allow for myriad interpretations that threads between a revolutionary response and an aesthetical choice. This small, tightly cultivated exhibition is a good reminder that works with a biographical intent makes a broad historical lens possible without dwelling too much on ego-intensive posturing.