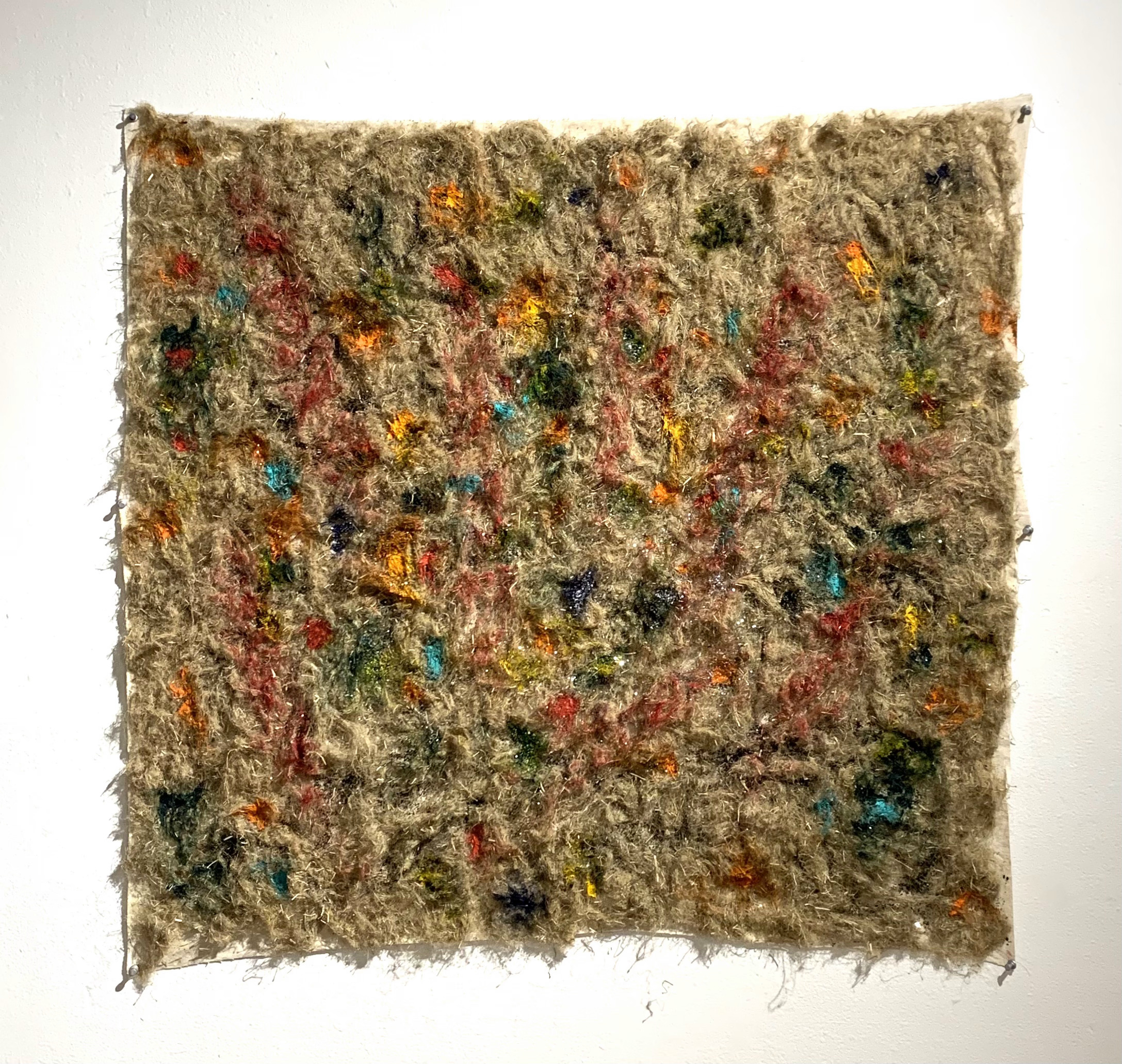 These works are incubators of conversations that ask viewers to see how “The work in this exhibition showcases intersections of the Black consciousness, interior, and internet spaces. As critical political conversations have moved from the streets to online platforms, there has been a rise of the fetishization of Black suffering supporting agendas detrimental to the Black community.” Included is work from artists Izsys Archer, Jahmai Brown, Nehemiah Cisneros, Logan Crompton, Kevin Hopkins, Dante Moore, Abby Oyesam, Taj Terry, Aleah Washington, and London Williams.

In our current reality, their work comes to us bookended by multiple constrictions, including the pandemic’s isolation and the lack of critical conversance from not being in the classroom on a steady basis. Atop these stressors, the BSU students work against an additional negative space wherein conspicuously critical work is immediately scrutinized.

Students are again reminded of an email referencing the KCAI Studio Use policy at the start of the semester. It says in part, “The freedom to express ideas through creative work and to debate and discuss ideas does not mean they may say or do whatever they wish, or however, they want to…KCAI may restrict expression, as for example, that violates the law, that falsely defames a specific individual…” allowing the school to censor student work as it deems necessary and the thin line students must tread. The Marketing and Communications Director at KCAI emailed a response when I inquired further about the policy. “The policy aims to create a learning environment that is inclusive to all and cultivates a safe and fair environment for the entire campus community.”

Leadership at KCAI must continue seeking a remedy to the divide between student creativity and legalese that slants towards the school’s governing bodies’ personal feeling. Policy language blunting creativity that sounds a lot like marketing copy does not obscure the fact it is censorship. For student artists, their work pushes against creative boundaries; its content should be discussed in realistic terms with instructors whose academic backgrounds align with the student body.

College campuses across the nation are reckoning with racial aggression – on both a micro and macro level. KCAI cannot afford to get left behind from this moral and economic summation. They are initiating punitive measures that heap insult atop injury towards their students, as in response to a recent event.

The ongoing situation at KCAI makes its way to the gallery wall and speaks to continuing issues at the school. Racial unrest and discrimination remain consistent around the nation, attracting non-white students and faculty can and should be the least difficult of tasks. Leadership must look at itself and confront what makes this so difficult and what monumental steps should look like as it struggles to overcome administrative problems at scholastics’ expense.

Damn, did you see Taj’s tweet? is the subject of Taj Terry’s tweet about their decision to depart the Foundations course at KCAI. An administration member inquired about this decision, and Terry tweeted about student debt’s stress over being the lone Black student in the course. In place of an actual work, Terry chose an inkjet print of his tweet that speaks to the very essence of why the BSU exists in the first place. There are myriad complaints from students about the college’s lack of diversity in administration and student life.

This work aligns closely with Dante Moore’s Mimetics of Destruction Superimposed on the White Body. While KCAI struggles with optics, Black students, all non-white students, have to perform double-duty in disavowing media misrepresentations and doing work that maintains their purity of voice without feeding these misrepresentations. Says Moore, these are “Memes of white people participating in cultural appropriation and digital blackface…As a series, these memes (mirror back patterns of) cultural appropriation and race in mainstream media.”

Izsys Archer presents a big, beautiful Black woman smoking a blunt in Burn one wit me, sis!  The image, imposed over a yellow legal page bearing post-smoke proclamations (I dream of burning a KKK mf), is the artist herself clad in a sleeveless tee, eyes in a half-lid. But do not mistake that for slumber. A dominant piece of the work is the screenshot of a KKK member being burned alive. Archer makes her mark with the fire this time; the dichotomy of burning a philly and incinerating a violent figure speaks to history and reckoning, alluding to the premise of Jesmyn Ward’s anthology of the same title.

Seduction of Vice by Nehemiah Cisneros is an allegory whose title suggests our better selves easily get caught up in sinful or immoral behaviors. But are they of our own making? Based on the imagery, Cisneros implies the lure of vice itself is embedded in a colorful world and cartoonish creatures that other and prey upon the black and white characters cut and pasted here. Does this place sound familiar? This structure created and supported by a hierarchy, not the victims’ own?

Young men in suits appear before a female figure that floats between them and the beast, who is riding a coin-operated pony to nowhere, unfazed as it controls the inflation of what looks like bubble gum. The men’s suits display sophistication in different eras–a much older period insinuated on the men in distress at the bottom left. Simultaneously, the main character (a self-portrait?), perhaps a conductor or magician, levitates and perhaps revives the floating woman. The beasts lurk close by still, in bright colors instead of the human figures rendered in black and white. To stand in front of this piece, I face many questions; does black and white imagery ground these figures in a reality that enables a real-world strength to conquer these otherworldly foes? Instead, could we look at them and see their polarization from this colorful world that suggests whitewashing? Does this rendering paint their struggles as either dated or exhaustively ongoing in the face of the Vice?

Looking even closer, notice the long-lashed eyes peering from above, watching the scene. Purveyors of law and order like Zangbeto guards, sirens, or mystics look on to see how this scene plays out so they may further their prominence. The imagery tells us that invisible characters are always watching and waiting here, the motivations yet determined. There is a lot of content to parse here, all of it worthy of lengthy discussion.

Altogether, the work in this exhibition emanates a raw radiance. Now that they have gotten us to stand in front of the work, we see stories, images, and ideas involving these artists’ experience, technique, and thought schools that work hard not to upend their grip on personal experience.

Visiting a gallery was a long-missed and pleasurable experience. Leedy-Voulkos Art Center is doing a fine job of observing safety and social distancing protocols. Remain masked and enjoy visiting the work in all of their gallery spaces.