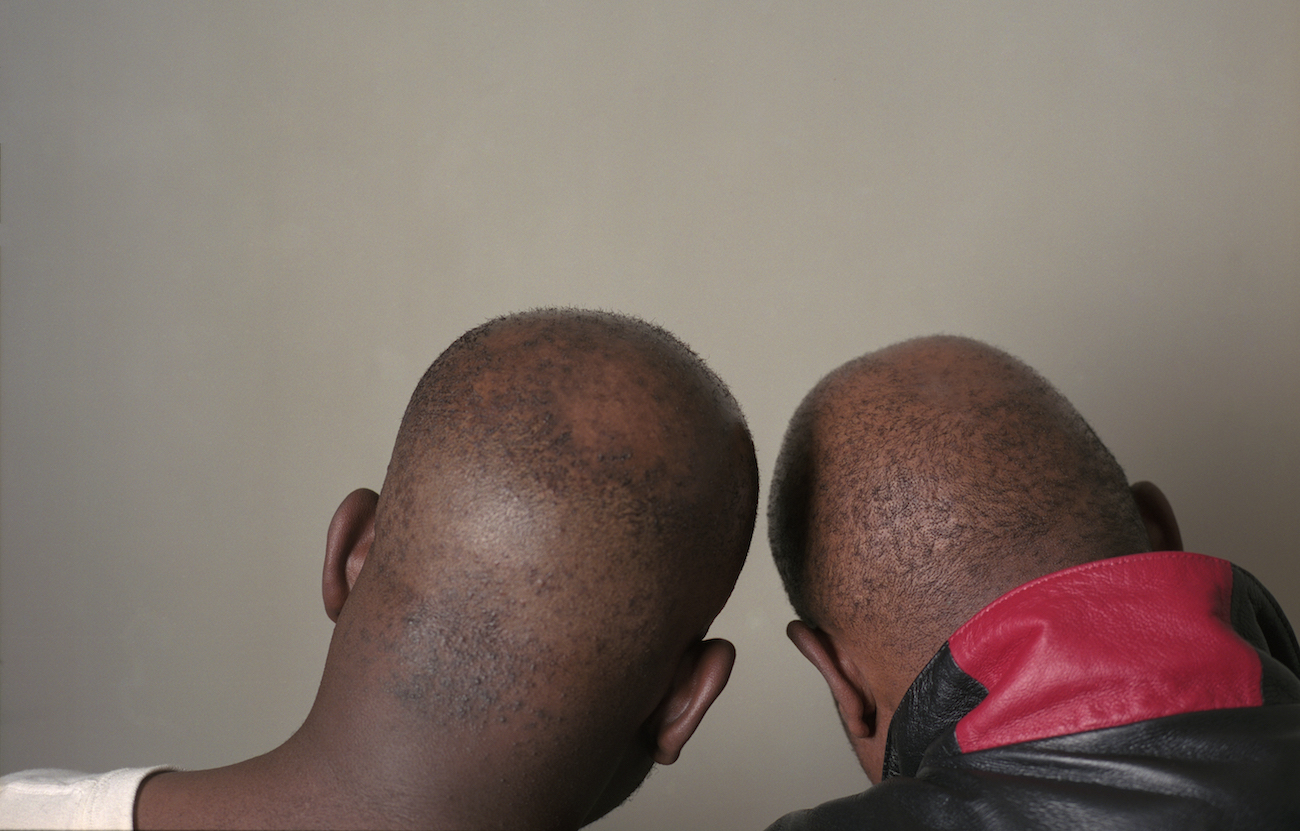 “The black aesthetic turns on a dialectic of luxuriant withholding – abundance and lack push technique over the edge of refusal so that the trouble with beauty, which is the very animation and emanation of art, is always and everywhere troubled again and again. New technique, new beauty.” The Undercommons, Fred Moten and Stefano Harney 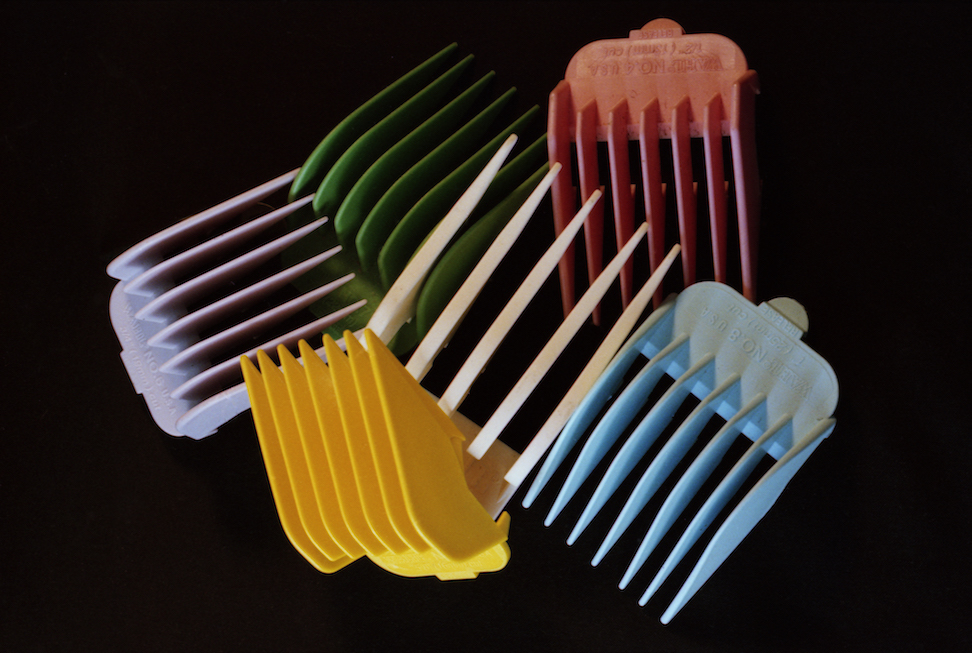 Clippers by William Toney (2016) Image courtesy of the Artist

In photographer William Toney’s Clippers (2016), a set of multicolored clipper guards, the artist’s own, are arranged before a black background, their teeth at some points intersecting —each guard in some way touching another. The blackness of the background feels almost infinite —it isn’t quite clear if the clippers are at rest, suspended in space, or falling together in a cluster. It’s an image that has likely been incidentally reproduced on the counters of countless barbershops. But in extracting these tools from their original context and placing them quite literally into the black space of a studio backdrop, Toney’s still life imbues these objects with a sense of wonder. Through this, a full recontextualization of the quotidian, he doesn’t raise the mundane to the state of beauty but rather troubles conceptions of beauty itself.

Toney’s work is an intensely personal exploration of the spaces and traces of black life. He describes the recent shift in his practice—which occurred after returning to his hometown of Kansas City from Columbia, Missouri where he studied photography at Mizzou—as a rencounter with the language of urban spaces, a re-immersion into the familial and the familiar. Left without the resources and support of his undergraduate art department, Toney turned to making work in his bedroom studio meticulously arranging “scenarios” to capture, some of which involved his family and friends, others which incorporated found objects and personal items. In triangulation with his studio-based work, the artist approaches his street photography through a similar lens. From his de Bechers inspired typological cataloguing of car sun screens across the U.S. to moments of flux or visual irony captured on the streets of Kansas City, Toney crafts a narrative of movement through space. 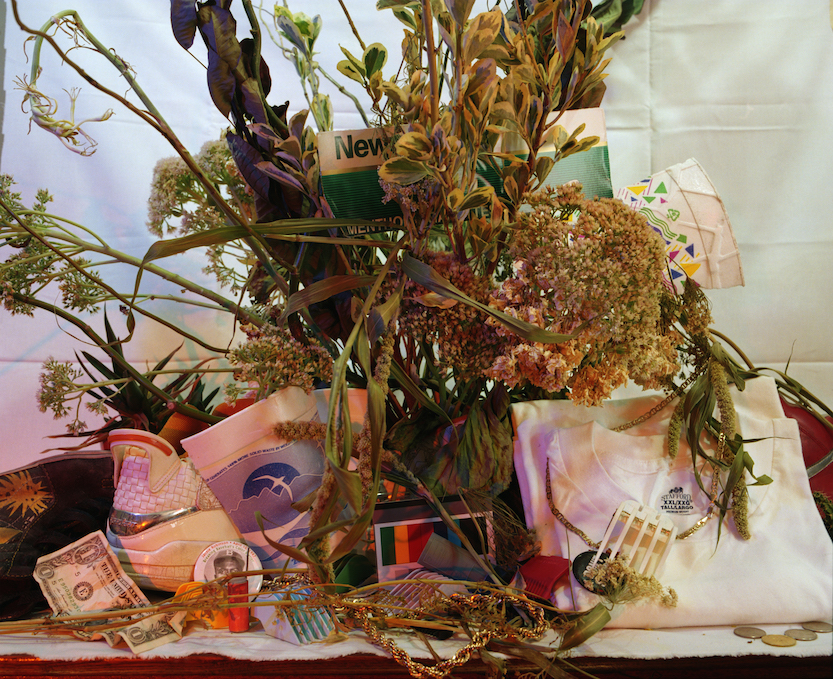 He considers these images to be in a state of interdependence, each a vignette standing both on its own and together which Toney compares to the relationship of tracks on a mixtape. Thematic refrains reappear in their full presence or in a gesture toward their presence. The clipper guards reappear in Stilllife White (2017) in the sculptural shrine-like arrangement of wilted and wilting flowers and leaves lit by a reddish light. Amongst the plants Toney places objects that ring of black urban life. The heel of the Jordan sneaker peeks out in the left part of the frame. A folded white “tall tee”— popular in the snap rap era of the mid-2000s — sits propped at the base of the arrangement. Elsewhere in the sculpture one finds detritus that Toney has collected from the streets of Kansas City: the face of a Newport carton and a generic styrofoam cup one would find at corner convenience store. Toney refuses to overlook that which is considered waste/discarded, whether in the form of cultural passe or actual objects that people have thrown away, instead bringing the viewer to an makeshift altar of blacknesses past, present, and future.

Here, his embrasure of refuse runs against expectations of beauty, distancing us the everydayness of the black everyday. It is this that is Toney’s act of refusal—a rejection of the terms of what is considered passe, ‘dirty’, or unworthy of an attentive eye.

The presence of the clipper guard echoes again in Far From the Tree (2010), a studio portrait of two closely shaven heads—Toney’s and his father’s—leaning into one another, the shadows of the crowns of their respective heads eclipsing the other. The image captures not only the physical similarity of the heads of a father and son but an orchestrated, nonetheless, palpable moment of tenderness and intimacy between two black men. The image acknowledges both the black familial space and the space of black masculinity as spaces in which there is the possibility of refusal of their imposed/supposed limits and acknowledgment of their beauty and complexities.

In a world where representation of blackness in the mainstream remains important, it fades as a goal or interest for both artists and mass political movements. Toney’s photographic practice enacts a practice of refusal, asking his viewers to encounter the black quotidian and its intersections and divergences with a mainstream on its own terms, in its own language in its full wonder and beauty.