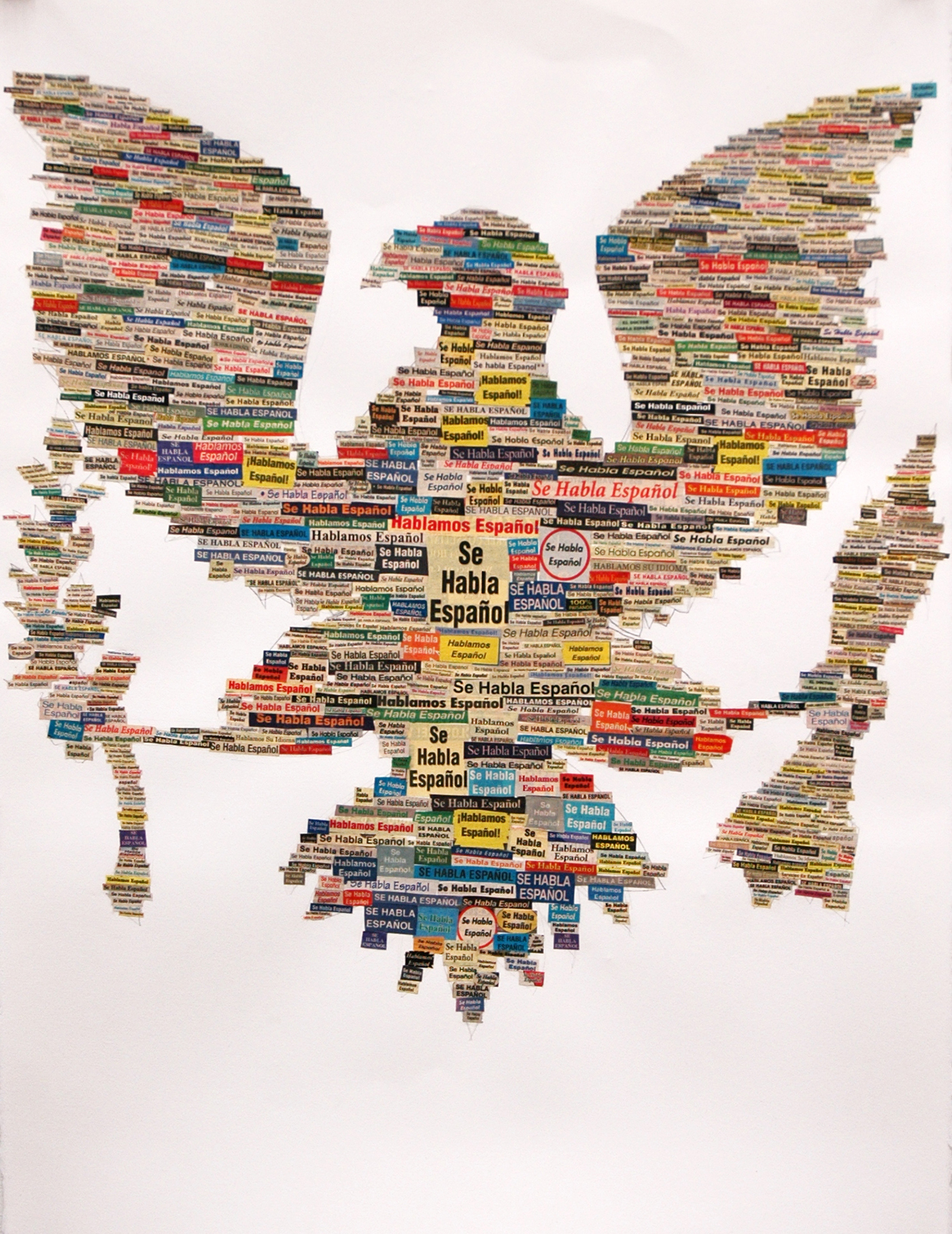 Camile Messerley discusses materials, process, and ephemerality with Enzo Antonio Moscarella, who assembles new icons out of everyday materials, such as rice and beans, to examine stereotypes and cultural assumptions.

Enzo Antonio Moscarella is an artist originally from Miami. He has since split his time between Miami, Boston where he obtained a BFA from the School of the Museum of Fine Arts, Boston from which he now holds an MFA from the School of the Art Institute of Chicago, and now New York where he currently resides. Moscarella’s work ranges across mediums and references current popular culture as well as 1990s New York and Miami graffiti culture. His work also quotes sociopolitical history through using icons such as the coiled rattlesnake from the Gadsden flag, featured in his latest piece Don’t Tread on Me. He merges symbols from both of these realms, pop culture and history, to examine the connections between the two while questioning the objective and the subjective.

For ¿Que Pasa, USA? Moscarella has designed the site-specific installation Don’t Tread on Me— three life-size floor drawings that merge the commonplace emoticon happy face and the coiled snake from the Gadsden flag using dry rice and black beans. The artist draws influence from mandalas in Buddhist culture, recontextualizing this practice through his chosen subject matter and materials. The work juxtaposes the play that occurs between satirical simplification of subject matter and the delicacy and ephemerality of its quotidian domestic material, which has a culturally specific connotation. The artwork’s scale and precarity challenge the viewer to engage in a heightened level of awareness—a viewer could potentially ruin the floor drawings by taking a wrong step. The piece evokes a kind of meditation through daring the viewer to tenuously walk around and observe the pieces within the gallery space.

One of Moscarella’s overarching goals is to bridge the gaps between personal identity and cultural interpretation. The artist addresses this in Don’t Tread on Me through his use of materials and subject matter—personal to the artist and his family yet, not unique to only him. His accessible materials offer a personal access point into the work, the viewer to a place, a cultural tradition, a specific history, or even being raised consuming the grains which make up this piece. And it is this simplicity which allows the mind to wander and meditate on the connections in the piece and find connections of our own, even if through instantly sharing the same space. 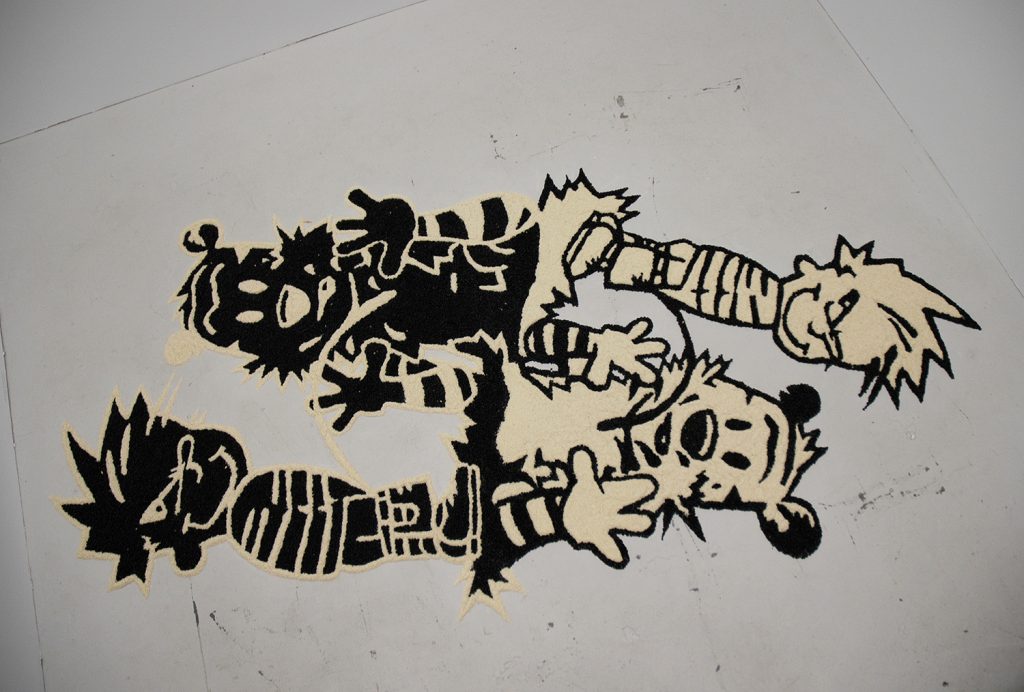 CAMILE MESSERLEY: The icons used in your work interestingly quote historical political events and individuals while also commenting on popular culture, in your artist statement you mention a previous work where you merged Castro’s face and the confederate flag. The work that will be featured in ¿Que Pasa, USA? at la Esquina merges a coiled eastern diamondback rattlesnake from the Gadsden flag combined with the universally known image of the yellow smiley face. Can you tell me a little bit about this relationship and your relationship to these images or icons?

ENZO ANTONIO MOSCARELLA: This work comes from an interest in mandalas and their construction using colored sand to create intricate patterns and motifs. In Buddhism, the creation of a mandala is an exercise of spiritual mediation, representing the Universe and the belief of radial balance. I have appropriated and recontextualized these by shifting the material from colored sand to black beans and long grain white rice. I have also reversed the complexity of design to graphic gestures. I use symbols from popular culture to explore my personal identity as a Colombian immigrant. I’m interested in [investigating] stereotypes and assumptions based on race and ethnicity.

The drawings that make up this series of works goes back to the margins of my middle school notebooks. These held a large amount of visual information that started as small thumbnails of the lesson being taught, but would quickly merge with much simpler doodles of cartoons or tags. My introduction to visual art began via early 90’s New York and Miami graffiti culture. The writer* painting pieces** often added characters within or next to their work. Concurrently many of the writers at this time were prolific bombers*** and produced much faster, abbreviated versions of their tags as two color throwups****. 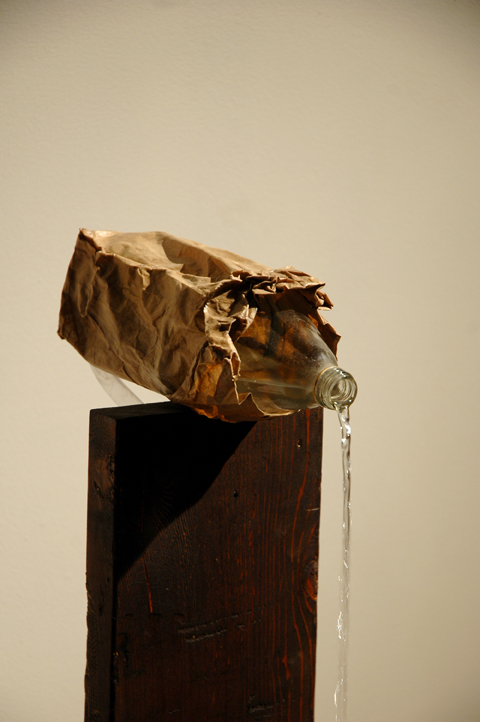 CM: In your work, specifically the pieces made using grains (long grain white rice, black beans), there is an extreme attention to detail that compliments the simplicity of the iconography used in the piece. Can you describe what the process of installing and producing these pieces is like?

EAM: When producing the floor drawings in the rice & beans series, I think about the concept of the throwup and how that functions as a visual marker within a time and space. I think about its impermanence. Because of its illegal nature, the throwup exists for a limited amount of time, the only record of the piece is a photographic one.

The materials I use in the series of floor drawings—long grain white rice and dried black beans—are very familiar to me. These were not only part of my family’s diet but also a staple in the Hialeah, Miami Cuban cuisine. Before this work, I viewed these as sustenance, and now I use these as I would any other material available for me to work with. The subtleties in the colors, when massed together are also very attractive.

Installing the work begins with thumbnails and sketches until a design or composition is finalized. I use chalk to sketch the outline of the piece on the floor and begin to fill sections with material while on my hands and knees. I gather small amounts together between my hands and push sections of material towards each other to create dimensionality and give the work a uniform thickness. It takes several hours of work depending on size and complexity of design. There is no glues or gels holding the material in place. I‘m aware that viewers may come into contact with the piece and possible step on it or kick a section. While, I do not encourage these actions, I do not necessarily feel that the pieces are sacred objects.

CM: I’m particularly interested in the play that’s happening between the delicacy and ephemerality of the floor drawings and the subject matter (and the play with satire) and the awareness that the viewers take on by walking around the pieces as meditation on the subject matter of patriotism and emotional signifiers. In addition to this meditation what are your hopes for the viewer in terms of what they may take away from this experience?

EAM: The work does not and should not live in a vacuum, and any interaction that results in the alteration of the piece becomes part of that pieces life cycle. With the work being displayed on the floor, it forces the viewer’s gaze down, making being in the space a much less passive experience. No one wants to be the person who steps on the “Art.” There is also that captivating moment when you watch the viewer come across the piece and realize that the materials are so simple; the installation is so simple. The moment when it finally hits them that a person was on the floor for an extended amount of time doing this, there is an element of labor and production that is very tangible.

There is a great satisfaction when completing the installation of the rice and beans floor drawings because of its large size and the hours involved in making the work. These force very deliberate choices since I am putting my body through a large amount of stress while on my hands and knees. I usually listen to music during this process and fall into a pseudo-meditative state.

The Gadsden flag is a historical American flag depicting a coiled eastern diamondback rattlesnake ready to strike on a yellow field. Below the illustration is the phrase “DON’T TREAD ON ME.” The flag was designed in 1775 and is named after for Colonel Christopher Gadsden of the Continental Army. Recently, the flag has seen a resurgence in its use as a symbol of American patriotism.

With Don’t Tread on Me, I am combining the coiled snake motif of the Gadsden flag with the ubiquitous happy face. Repeating the shape three times, I shift the happy faces upturned smile to a straight line and then finally to a turned down sad face. I am captivated by the simplicity of how the angle of bend in a line can completely alter the emotional reading of the drawing. The triple replication of the snake as well as the multi-directional placement challenges the weight of the original symbol. I would like the viewer to contend with the time and effort in creating the three images in relation to their impermanence. The piece is a meditation on patriotism, emotional signifiers, and temporality. 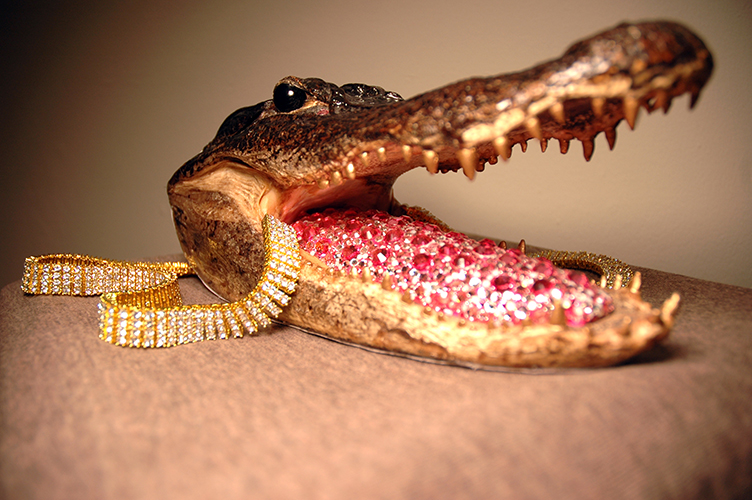 Iced Out by Enzo Antonio Moscarella. Image courtesy of the artist.

CM: What projects are you thinking about for the future and will you be continuing the process used in the work for ¿Que Pasa, USA?

EAM: The next step in the rice & beans series would be to take these objects outside of the gallery setting and continue to push the textural boundaries of the material. I feel that moving them out of the relatively safe space that is a gallery or studio could have very positive or negative results, which of course can only be beneficial to the furthering of the series.

*Practitioner of the art of graffiti.

**A graffiti painting, short for masterpiece. It’s generally agreed that a painting must have at least three colors to be considered a piece.

***To go out writing. Prolific painting or marking with ink. To cover an area with your tag, throwups, etc.

****Over time, this term has been applied to many different types of graffiti. Subway art says it is “a name painted quickly with one layer of spray paint and an outline”, although some consider a throwup to be bubble letters of any sort, not necessarily filled. Throwups can be from one or two letters to a whole word or a whole roll call of names. Often times throwups incorporate an exclamation mark after the word or letter. Throwups are generally only one or two colors, no more. Throwups are either quickly done bubble letters or very simple pieces using only two colors.