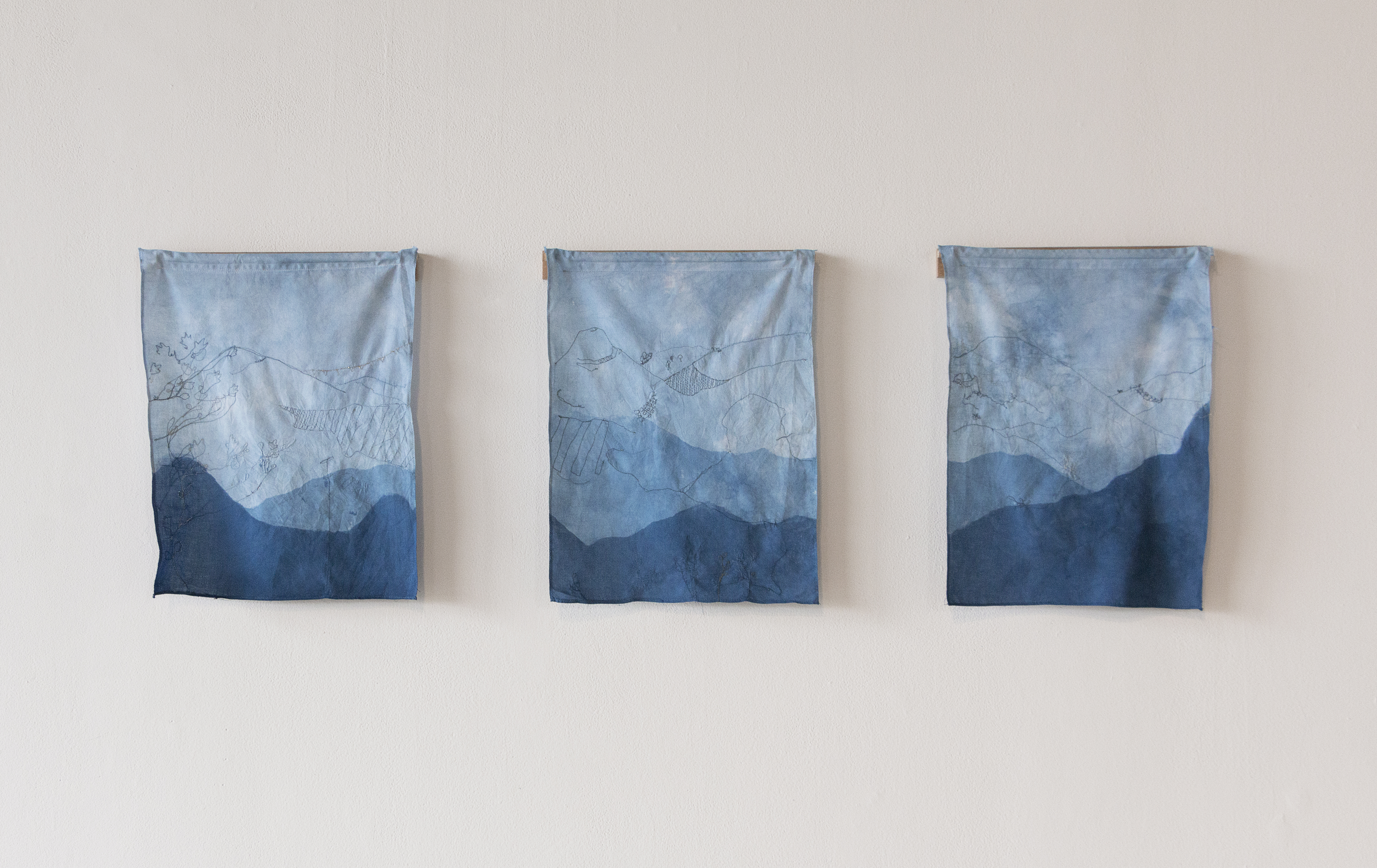 Mary Kuvet’s indigo resist dyed work is a consideration of both personal and cultural identity, an attempt to locate a mixed Mexican-American identity. The series Hybrid Flags begins as an approximation of a Mexican flag, two dark vertical stripes with a white stripe and eagle and snake in the center. But they appear in different permutations–due to the nature of the resist dye process–and it feels significant. Some are closer to the design of the actual flag, while others deviate and don’t include the eagle and snake. Instead, they include the image of a piñata. The piñata feels small, delicate–a more intimate icon–than the imposing eagle. It feels like a counter to the eagle, entering into more of a personal realm.

She describes the piñata as a proxy for herself, “awkward and unassuming” with “insides and outsides that don’t match and content that widely vary”. She references a home video of herself as a young child during el dia de niños (kids’ day) in McAllen, Texas, the border city where she spent her early childhood. In the video,

“…a piñata is strung over a basketball net and I am trying intently to break the piñata open with an old broom but in actuality with each hit the piñata barely moves. The piñata is me, and it isn’t me because it’s also a stand in for a culture that I will never fully measure up to.”

The process of indigo dyeing ensures a different result in each flag. The repetition of different flags feels like an attempt to find the “correct” way to perform and represent one’s identity.

From a distance Mary’s large scale textile piece, Indigo Maps, resembles satellite images of land–as well as small, more domestic images. These images–little mailboxes, cacti, chairs, cats, houses–are abstracted and almost like a child’s drawing. They speak to a language of remembering or even nostalgia. It seems to function as a memory map. Even imposed on a more topographical substrate, it feels removed from geographical space, speaking to the notion of home as not a place.

The work featured in this show references and combines the various landscapes that Mary’s has visited in the past year (the American southwest, Oaxaca Mexico, and Agios Ionsis, Crete). This amalgamation of landscapes is a way of processing Mary’s own relationship to the notion of home, as a landscape, and as a constructed thing one carries with them wherever they go. Through her travels, she says that she gains “a better understanding of who I am…and how to show up as [herself] fully”. Of her own place of origin, where she has recently returned after five years of study and travel, she says,

“I dream about the place that made me, the Mexican American culture of south Texas. Breakfast tacos, chilaquiles, pan dulce, and the way we support each other and model collective care, mixed with violence that stems from a settler-colonial past and touches everything in the present. An object that gets destroyed in celebration feels like the perfect vessel for the many emotions I have about home and belonging and in some ways feels like hope.”