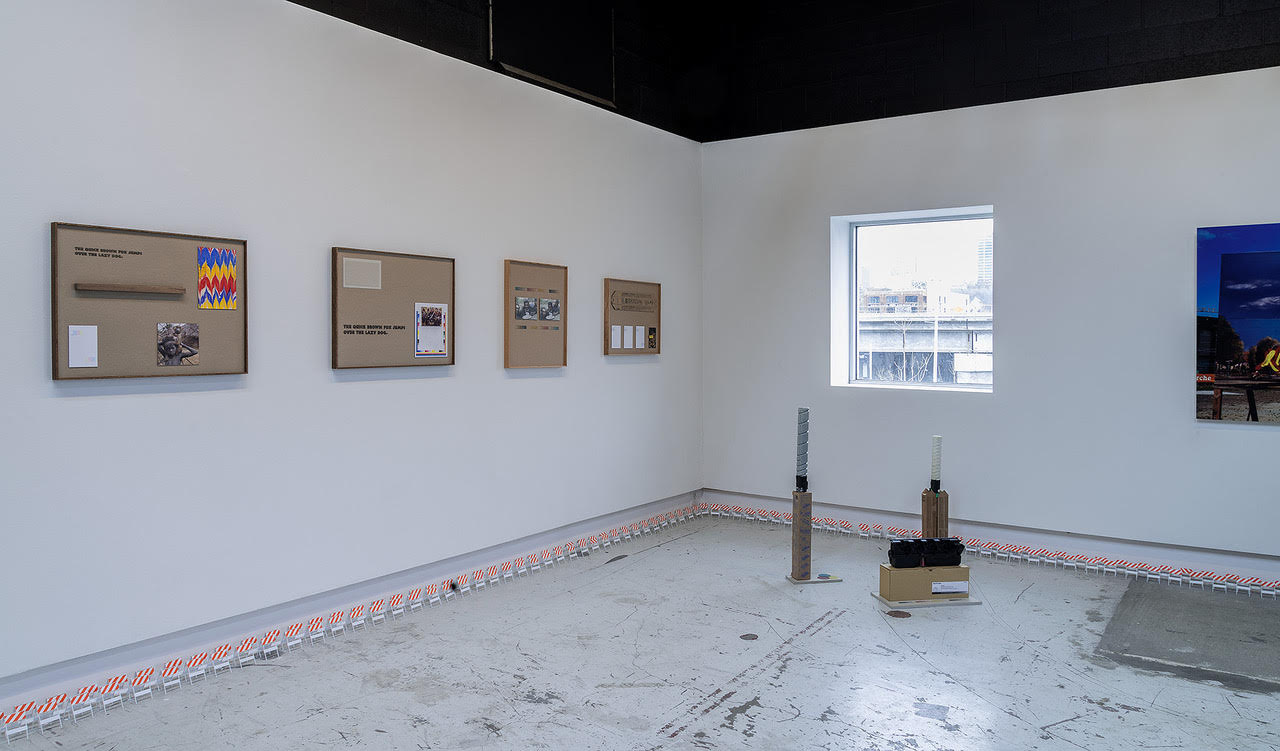 Exploring Cultural Memory in The Work of Lyndon Barrois Jr. 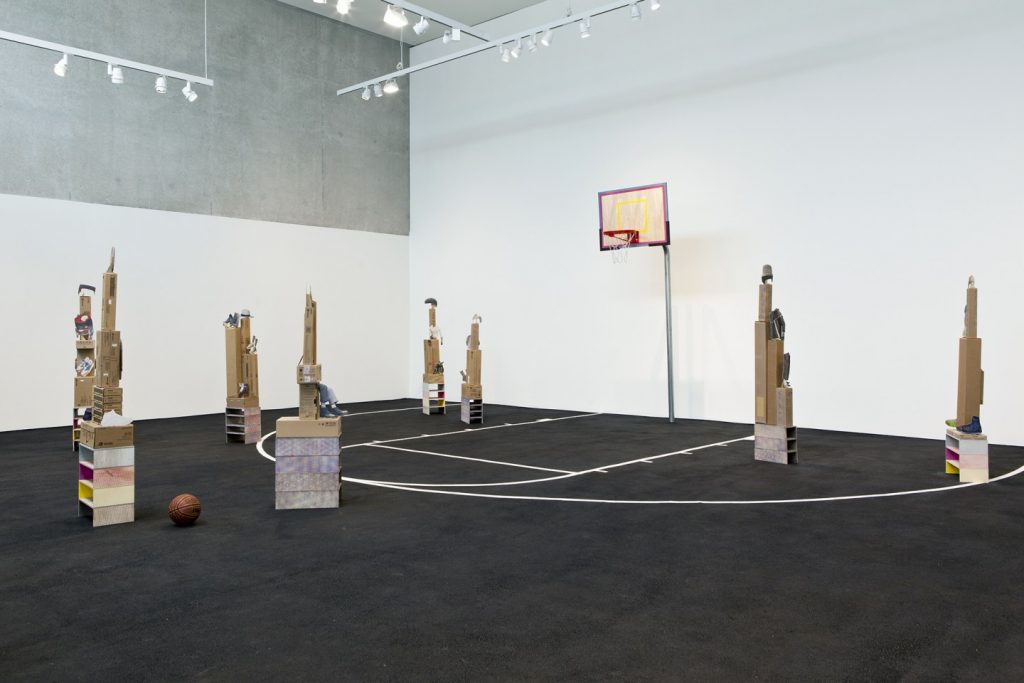 I first encountered Lyndon Barrois Jr.’s work at the CAMSTL where his installation Of Color was exhibited. In the gallery was half a basketball court: fresh, black asphalt with crisp white lines, a hoop, and a basketball. Complicating this construction were structures made of stacked toner boxes and adorned with fragmented halftone catalog photographs of shoes and clothing, each topped with a cardboard cutout of a hat or hair. These sculptures were both figurative, arranged like basketball players on a court, and architectural, like skyscrapers on a city skyline. As a physical space, the installation allowed viewers to move through the court and through the box towers. I interpreted this work as an assertion of legitimacy of the street court as a space for Black expression and culture. 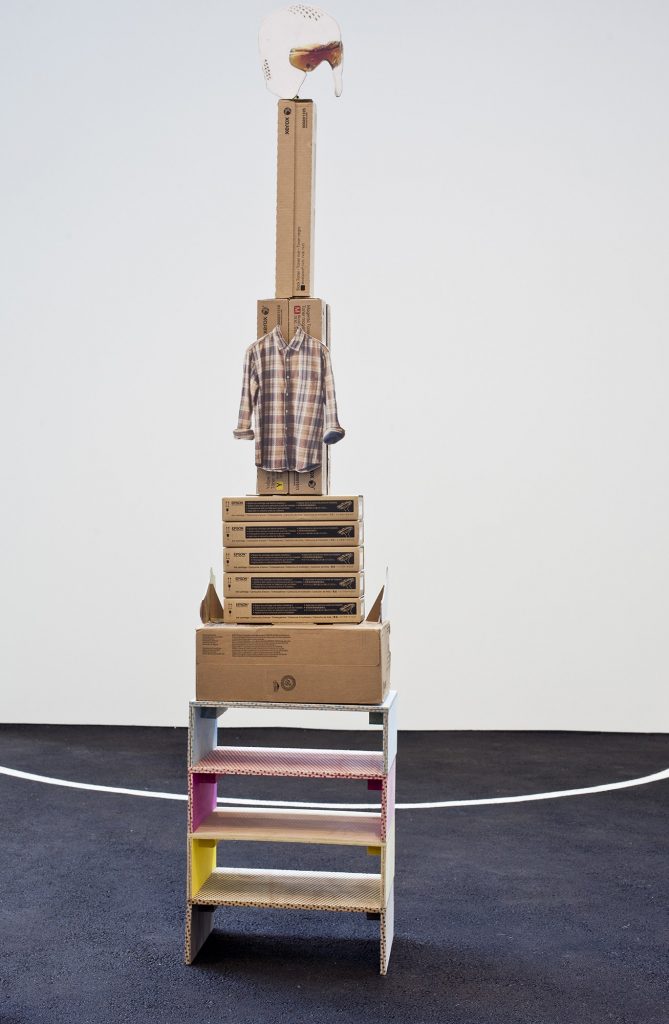 Barrois’ new work, shown in the exhibition Sensible Disobedience, included a series of four collages, along with three small sculptural pieces. Unlike Of Color, these works didn’t command the entire gallery space, but shared walls with other artists’ pieces, thus creating new contexts. In fact, Oli Watt’s tiny traffic barriers interacted directly with the Barrois’ sculptures. The collages were each on brown chipboard, framed by dark wood: A National Geographic image of a small shirtless Black boy holding a monkey, paper marbled with blue, yellow, red, CMYK test prints, the well-known pangram “The Quick Brown Fox Jumps Over the Lazy Dog”—the elements of each collage feel deliberately chosen and arranged. Much like the sculptures in Of Color, these new structures were made of toner boxes and spent toner cartridges. But they were far shorter, and lacked a sense of figurativeness; instead they seemed more formal, bringing to the forefront their materiality as waste products of the printing process. Viewed together with Watt’s traffic barriers, I began to think about printing as means of accessing an audience and having influence, and then who is barred from that by what may feel like hundreds a tiny barriers. 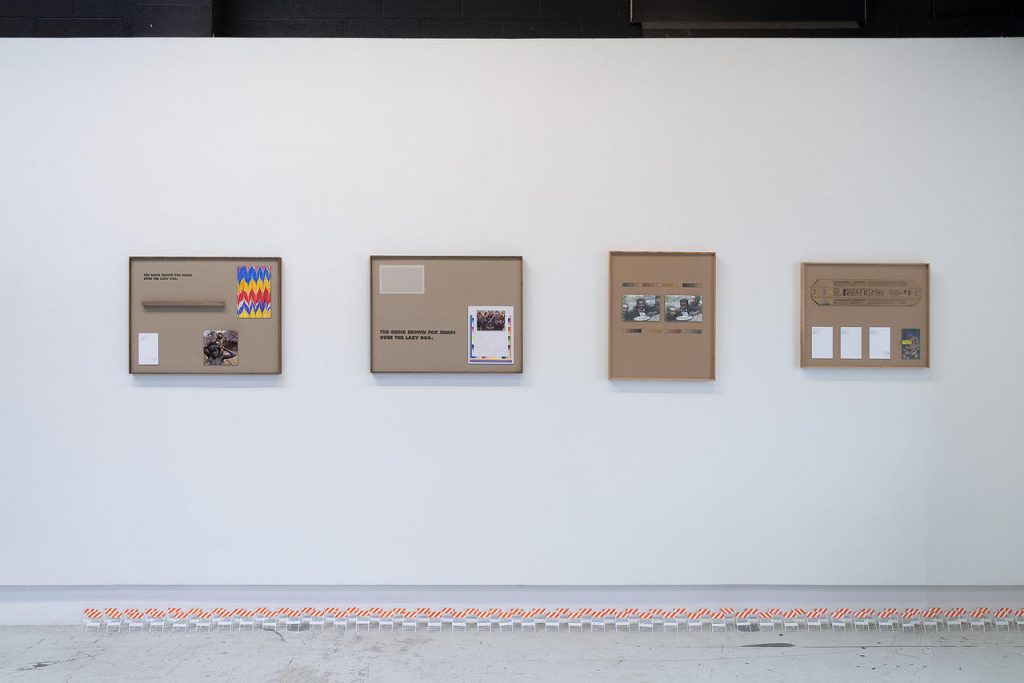 Barrois evokes cultural memory–that is both collectively and selectively remembered. He allows his viewers to shift their understanding of familiar images, to see them in new contexts. The magazine pictures of the boy and monkey, the tribal women, and the mother and child are immediately recognizable as being from National Geographic. In recognizing the image, I had a number of immediate connotations: I was struck first by a sense of nostalgia for film photography and childhood adventure, then by the voyeurism and exoticization of the subjects of the photos, then by a sense of appreciation of the photos as intimate portraits. Each element in the collage evoked a series of immediate impressions. They were hieroglyphs that contained layers of meaning for each person who views them. Combined, the images can take on different meanings than they do individually. But whatever new meaning they take on, there is still an understanding of each elements on its own.

This understanding of the image by Barrois, both in popular culture and the art historical canon, allows him to subvert the visual representations of each to create other meanings and narratives. Throughout his body of work, he has explored the various methods of manipulating the image—cropping, collage, curation, and juxtaposition. He draws his source material from films, history and art history, popular magazines, and photography. By re-contextualizing found sources, he takes control of existing images and their attached associations and is able to forge messages of his own. 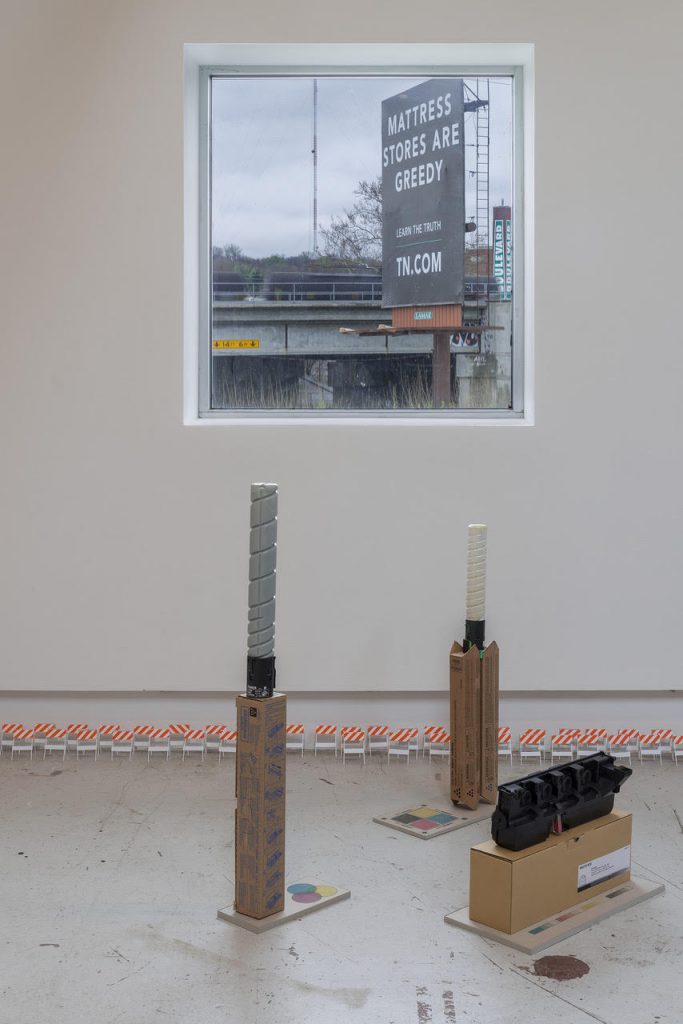 Barrois’ work reminds us that images, and our associations to them, are manufactured, not inherent, and the repeated use of the toner box and repeated reference to the CMYK process signifies that. It is possible to use the CMYK process to only ever create one color, but that singularity does not represent its ability to make many hues. In creating totems from the remnants of the process—the empty ink cartridges and packaging—he illustrates an ordinary origin of the images that our culture reveres. The printed words on the boxes, turned outward toward to viewer and that read “waste box”, describe warnings, and show illustrated instructions, invites us to question the ultimate authority of images, as they are created by people as fallible as ourselves.