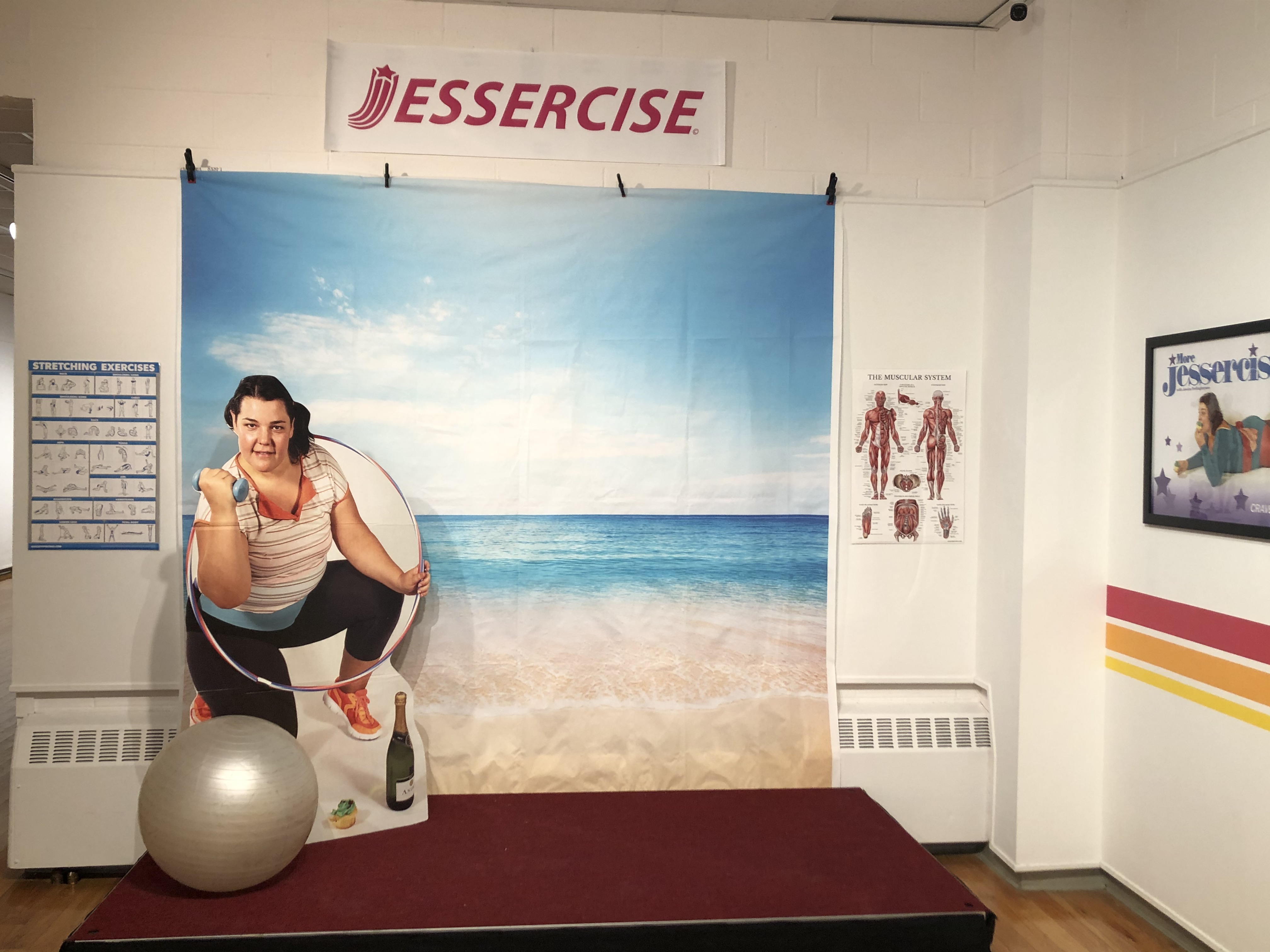 Eye of the Tiger, Belly of the Beast. Jessercise at UCM Gallery of Art & Design

Humorous cliches were abound in Jessica Frelinghuysen’s installation Jessercise Gymnasium, which recently closed at the University of Central Missouri Art Gallery in Warrensburg, Missouri. However, beneath the can-do platitudes throughout the installation, we get an understanding from the artist’s motivations for the similarities of achievements and failures between the gallery space and the fitness studio.

The gallery is arranged as a smallish gym, circa 1985. With painted bands on the walls of maroon, orange, and yellow, the mood embodies retro-fleek, like Jane Fonda’s workout series. Interspersing these bands are small placards demonstrating workouts called Art Tips, featuring actual exercises that also relate to the gallery space. Examples include the Gallery Lunge that demonstrates the proper technique for lunges to be performed whilst walking around the gallery. Posted along the walls are inspirational posters of the artist and fitness friends in workout gear and activewear. Another wall features wall mounts holding a set of yoga mats, jump ropes and dense fruit including watermelon for lifting, like old fashioned medicine balls. Also on the racks were bottles of champagne used during performances with audience participation.

Against another wall, Frelinghuysen set up a small carpeted platform and led gallery visitors in an instructional workout. This included moves like the Pop and Squat, using the champagne bottles mentioned above as “Hydration Weight.” Never mind the Bend and Snap when there’s a champagne payoff instead! Participants also engaged in a sprint around the gallery, dipping into a bowl of potato chips with each lap.

Also part of the workouts were an A-frame dumbbell rack holding snack foods and treats. A second dumbbell stand held large jars of pasta sauce, a pineapple that had been there since the show opened, now mummified, and a giant bag of Basmati rice. If you didn’t know this was a show about exercise, you might get the idea this space was transitioning from a bankrupted gym to a poorly stocked convenience store.

The use of these specific foods is meant to be specific to the Warrensburg, Missouri area, about sixty south of Kansas City. When Frelinghuysen originated this project in her adopted hometown of Hamtramck, Michigan, it was done so with consideration of the diversity of immigrants and artists inside Detroit, and represented by the food enjoyed there. It was thanks to the availability of these tasty international foodstuffs, the artist sought to actively lose weight. Forced to go to the suburbs for an actual gym, Frelinghuysen saw “the parallels between working out and making art. There is an undeniable similarity between being in the white-walled space of a gallery and the neutral space of an exercise studio. The daily dedication to each practice, and the futility and small triumphs that come with both.”

The exhibition took shape when she began creating “performative and subversive public interventions,” allowing her to use her city as a training ground. This included feats like “tossing sides of meat with the butcher in Bozek’s meat market and lifting a huge bag of onions outside Al Haramain Market, a local Yemini run grocery.”

The humor of this exhibition is intended to focus on Frelinghuysen’s struggles with weight loss. However, these interactions are “honest feats of strength.” Moreover, the main point of the artist’s intent is to present a lightheartedness to exercise, an activity that can, at least in the beginning, be viewed with dread. Jessercise has shown us the dedication of two practices–her artist’s practice and her workout regiment–along with their difficulties and successes.

Jessercise was held at the UCM Gallery of Art & Design from February 10 through March 7, 2020.