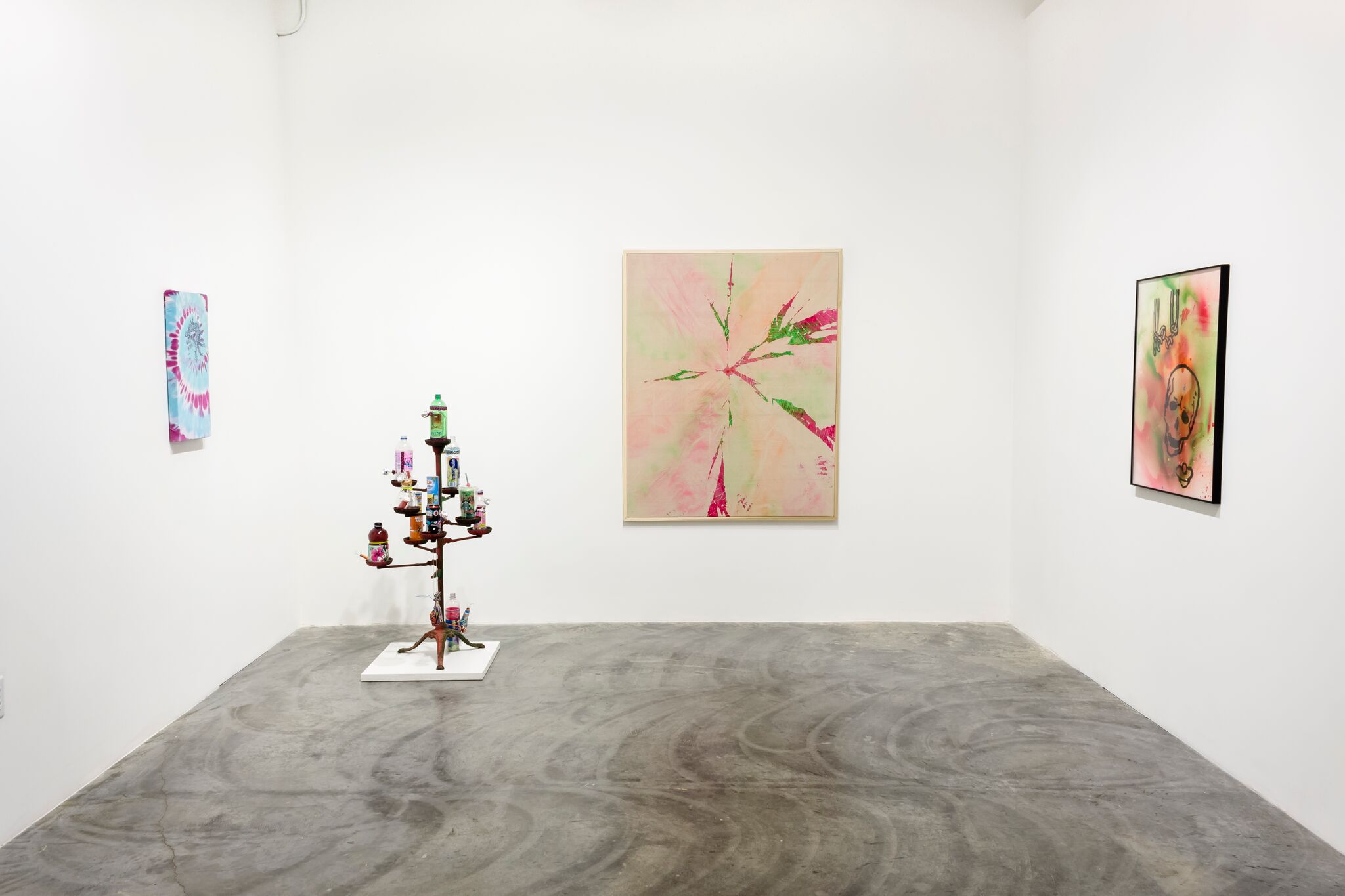 F**k the Lollipops, Justin Beachler Hasn’t Got Time for Suckers

I profess a bias in my analysis of Beachler; he became a friend whose work I have been following and discussing for several years, starting with Smut Compositions (loved it!) and Srimary Ptructures (not so much.). Since then, a respectful relationship has emerged. I began to care about what he was doing. He doesn’t simply choose images at random, he and I share a thirst for historical referencing as it relates to pop culture. There is imagery on his Instagram that runs the gamut of mainstream seriousness and absurdities. It is why I find it easier than others to pick at the intricacies he projects in his work and also why I believe he isn’t going at this willy-nilly; there is a long-running end goal that as the internet portrays, has no end.

Justin Beachler’s new work at Haw Contemporary, Old & in the Way, is a pastiche of cultural recognition synthesized for today’s mindset.  Beachler has a social media presence that is a bit like rummaging through a thrift store run by intellectual lunatics (Think Brad Pitt’s character in 12 Monkeys). He is simultaneously mocking and tossing out the old formalist ideas of how one might look at paintings and other media in favor of a heartier “hunter-gatherer aesthetic.” The progression of his work embraces a strong personal philosophy that examines how the ideas and objects found in cultural ephemera are affecting our psyche; the way we think, feel and act. 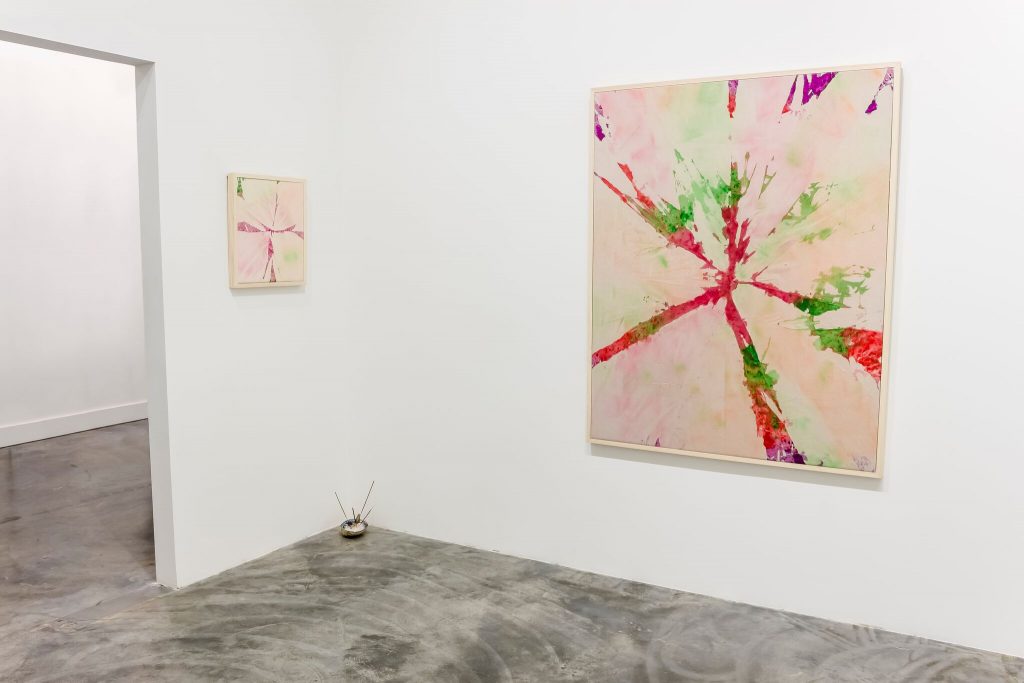 This show in particular — part of the gallery’s Enable Program — was a departure for Haw’s normal commercial focus.  Instead, showcasing work of younger artists putting light on experimentation. The one concession given to Old & In The Way was the burning of incense that permeated the back part of the ground floor space and led you upstairs to Beachler’s work like a Greek siren out of Euripdes, but once they burned out were never re-lit and that’s a shame.

For Old & In The Way, I was expecting a continuation of his online menagerie of image caching, but here he holds fast to one train of thought that delivered. He offers an idea based almost entirely from Grateful Dead love, circa 1974, consisting of assorted media; including painting, found material and sculpture. This group of new work is probably the happiest I’ve ever seen from Beachler. There is less nihilism and a more focused tone that fulfills a statement on the state of things in this societal moment.

Here, he lays bare all the things we think are semi-important;  the business model of capitalism, foodie culture, cannabis culture, and stock imagery aglow with radioactive pinks, greens, yellows and blues. There was a lot of reminiscing; with wondering about the work’s meaning rather than observing it and moving on, with some exceptions.

Not Fade Away is the best example of such an idea; the creases in the canvas appear to have been screen printed, showing the concentration devoted to the celebration of an error in original form becoming something exciting to new eyes. And it also shows how many people, at the opening I attended, focused on this one example rather than standing back and understanding the idea in full. But if one looked closely, dead center is a hibiscus flower. It was so exciting to discover this beauty hidden in plain sight that I could not stop pointing it out to people who appeared more interested in the nostalgic spin art and tie-dyed elements. Beachler presents the rare Nudie in a closet of leisure suits, but few cared. There were several conversations about other works in the space and I felt it became a case of not seeing the forest for the trees.  Do not think of only the surface element, but the intent that can generate a conversation. 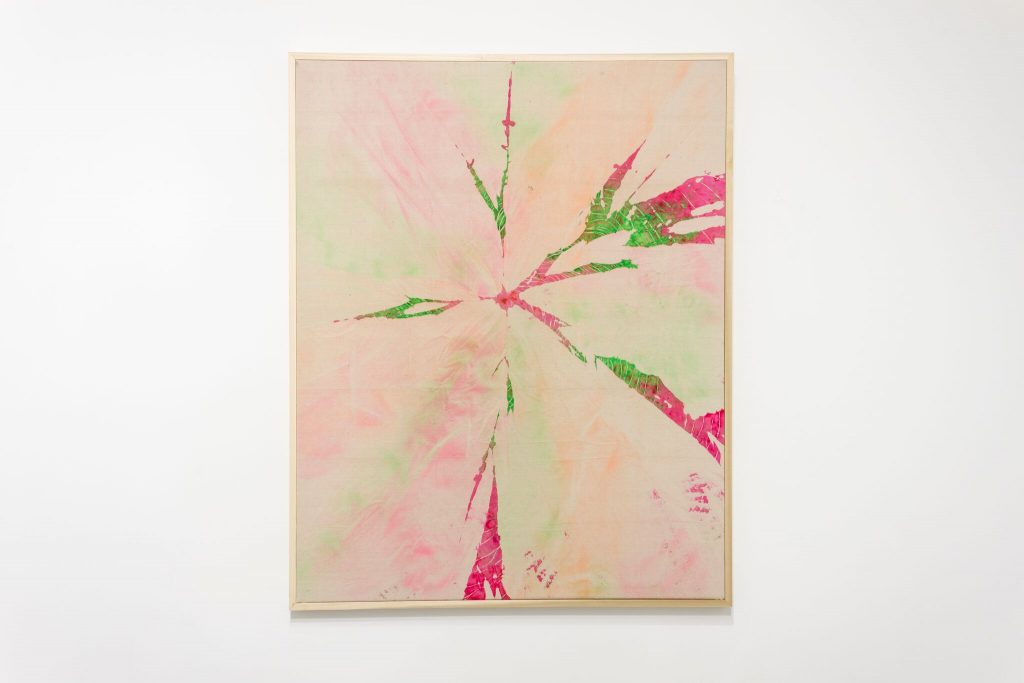 Not Fade Away | Image by Tim Amundson

The Haight presents a similar concept to augment this theory. Where t-shirts like this were found everywhere (I had a few!), now they are nostalgic, recalling what it represented and our longing for it; a period where getting high was an act of defiance in pursuit of personal freedom from a losing war being fed its young. Skulls & Roses and Alligator, with their recognizable context, play into feelings these harbingers are a constant. Slavery is Freedom. War is Peace. 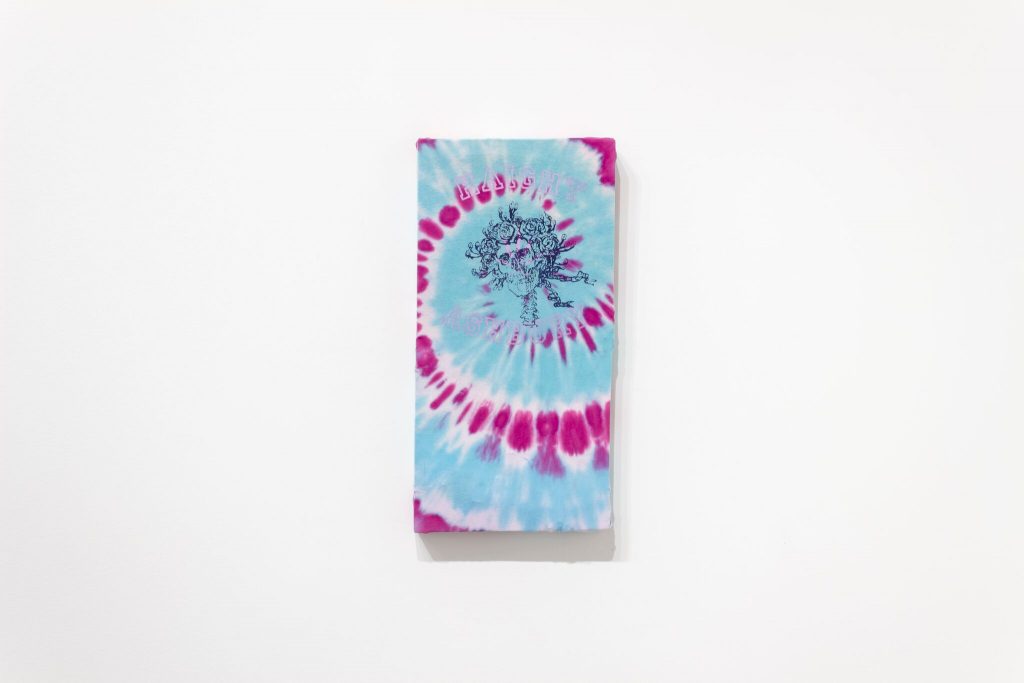 The Haight | Image by Tim Amundson 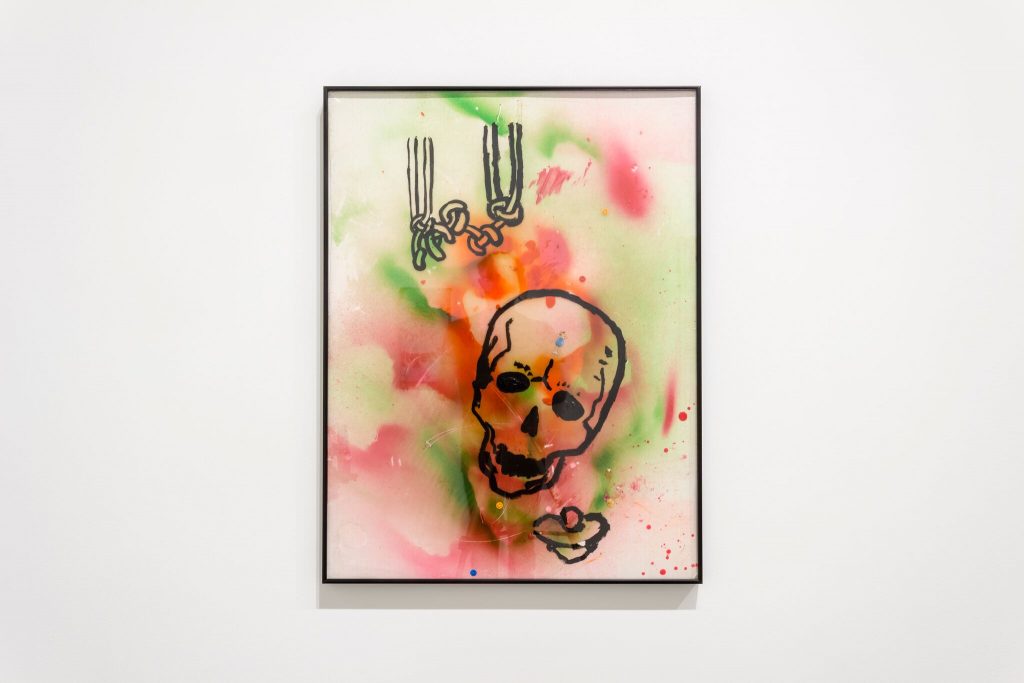 All of the materials for this show were either scanned from online sources or found/bought. By spending a long time in the space, I observed people of all ages having many interpretations. Several viewers wrongly mocked the  DIY-ness of Scum Rigs,  the multi-unit bong/sculptural piece made from plastic 2-liter soft drink bottles that was altogether serviceable. However, it is precisely the point of so much that Beachler observes. With this he presents a “Duchampian” readymade that is — as he would put — a “middle finger emoji” to the institutional machine itself.   I am afraid we are headed towards weed culture elitism similar to the foodie’s pedantic oration of “flavor profiles.” But here, Beachler heads it off at the pass, rallying against such nonsense before it’s even begun. 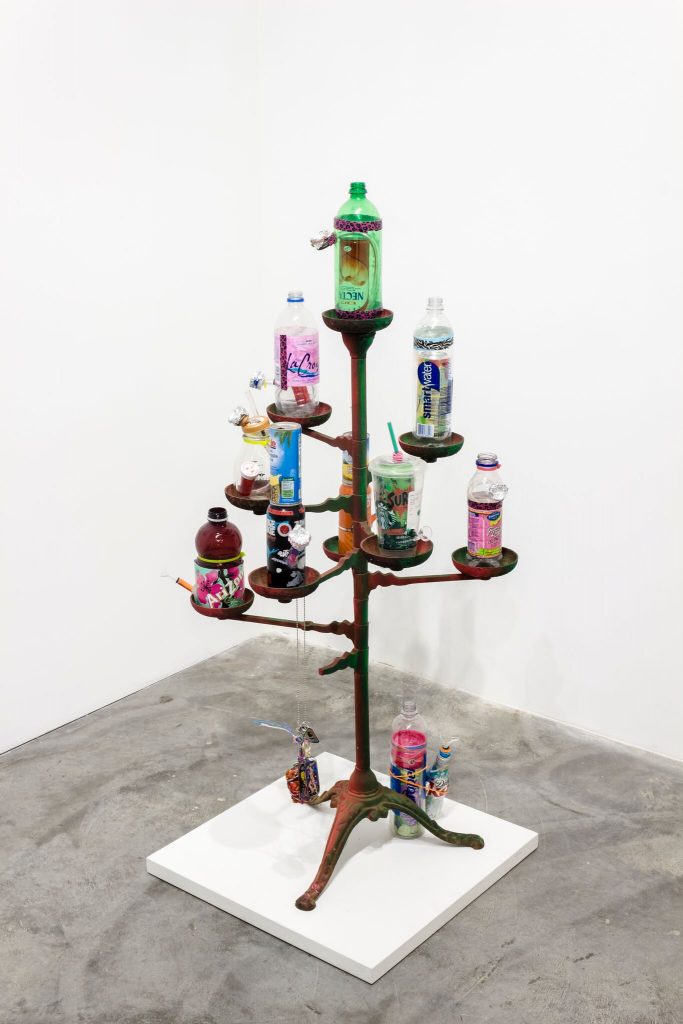 The Internet is either a vast wasteland of ideas or a looking glass.  It has successfully bridged the generation gap and from this are to be found an enormity of concepts and a new way of thinking. Some web-based work that doesn’t necessarily propose a strong theory of ideas can appear random and not useful, either as knowledge or information. It is important this art making is considerate of the way we parse data online through Google Searches and endless headlines on the Huffington Post. This recognition of form is  I consider Justin Beachler’s ongoing practice  to be among the more serious artists; he presents a succinct visual language, not random data. When you examine his imagery, rather than scroll past it, he discusses the absurdities of the world from then and now. The things one takes seriously is ridiculous, while the serious is sometimes glossed ove

There was a time when I thought Beachler ought to shy away from the Dan Colen/Joe Bradley axis of low-culture ephemera. But after watching his theories develop and take root, he is headed in the right direction. Beachler sees truisms masking deeper, more contentious feelings as we confront a harsh reality and this may be the rationale one holds onto as they skim image after image. It is grim, almost pointless, if you aren’t willing to pontificate on its meaning. He isn’t trying to fool us; he shows us that we have already been fooled.

The hypocrisy is still there to be construed, differently orchestrated than before and Justin Beachler is the right impresario for this moment.