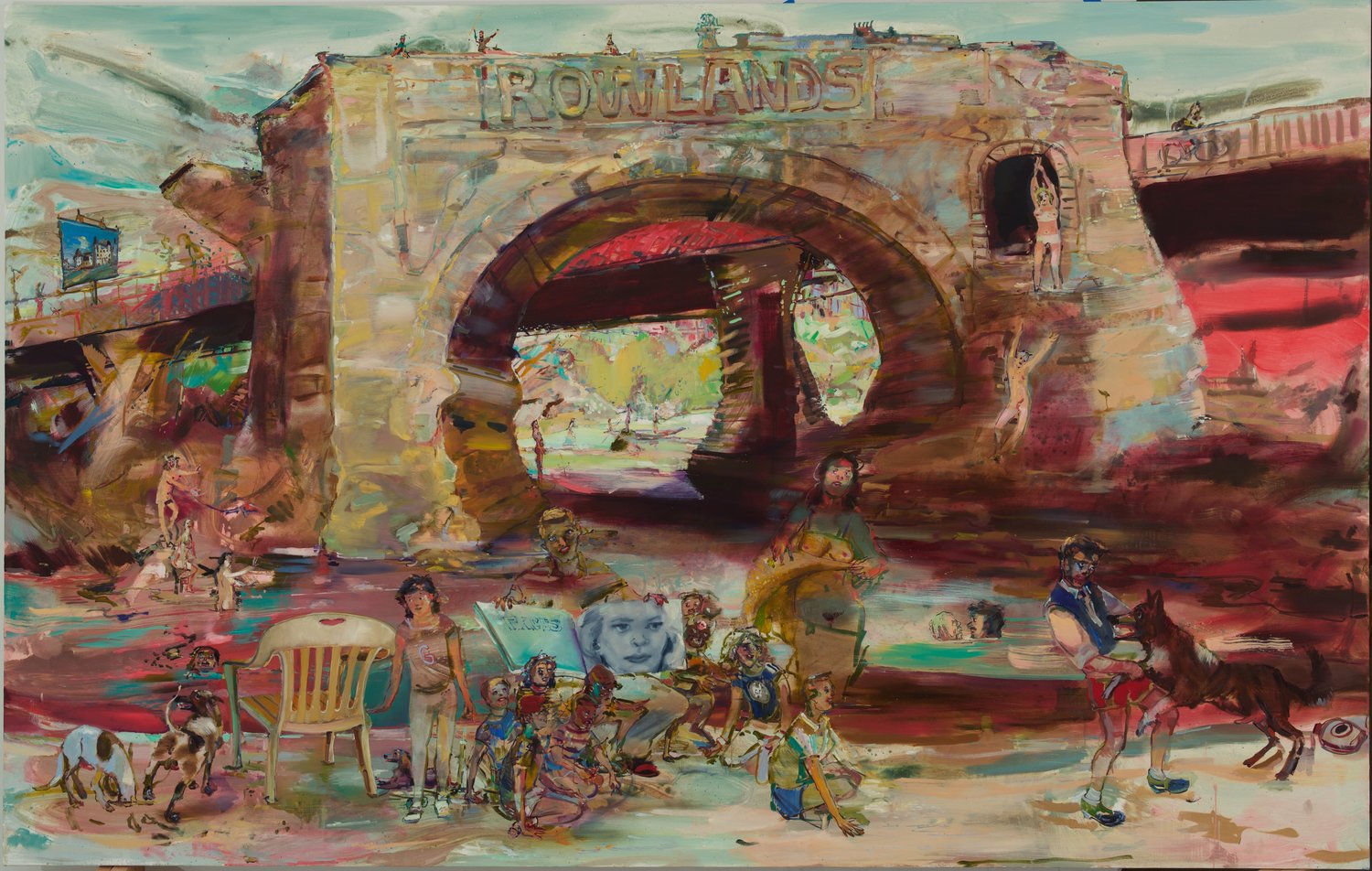 From Fleetwood Mac to BDE: Angela Dufresne Makes a Scene 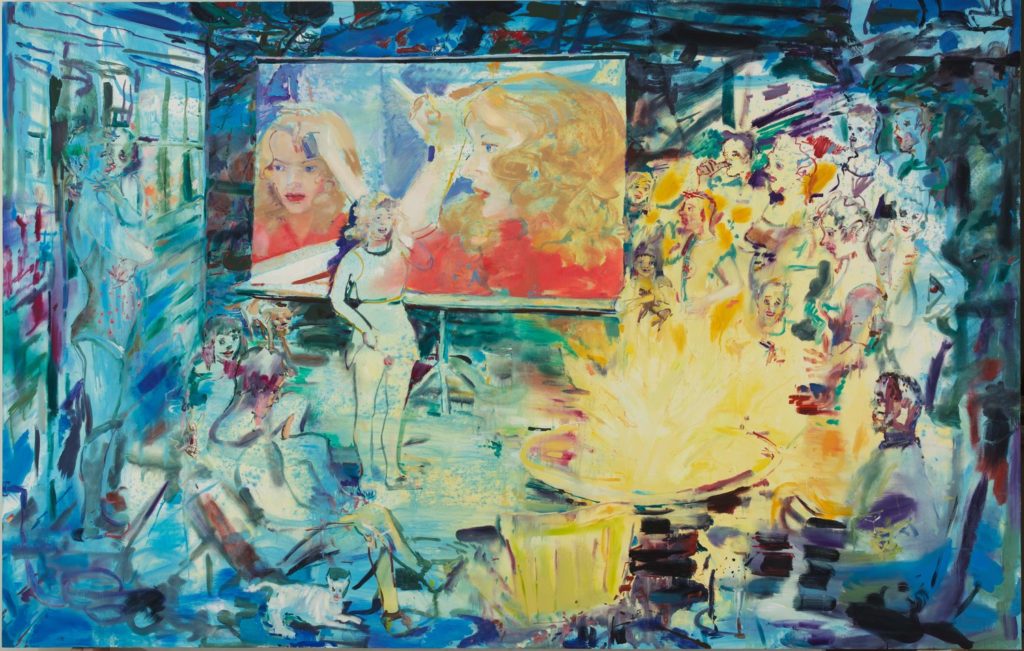 The School of Gena Rowlands, 2016 oil on canvas 84 x 132 inches Courtesy of the artist and Monya Rowe Gallery, New York

Our human perspectives have shifted with the rise of technology as well as our cached and tracked online personas. We recognize ourselves now as hybrid creatures floating in and out of cultural and historical moments. The fleeting and the mundane occur together and we are present in these moments, playing the roles as they have been assigned by history. Before the opening of Making a Scene, an exhibition of paintings and video at the Kemper Museum, artist Angela Dufresne and I discussed these fragmentary concepts of the self, performance, queerness, and when muses become monsters.

Dufresne’s work presents a feeling of groundlessness in the grand cinema of our everyday life. The bodies in her work sit in a lucid figure-ground relationship; spectral and within reach of embodiment. Our sense of being a singular “self” is acknowledged as a concept of fiction, but one we latch onto.

While gallery preparators drove cranes and applied the final touches of vinyl, Dufresne’s performative pieces hummed in the background. The videos were running on a loop, tucked away in the back of the gallery and hidden from direct view. While these works visually differ from the paintings on the surface, they are an important key in understanding the bodies in the large paintings. One after another, the videos take place in settings filled with greenery, some in the woods, others in a greenhouse, — all with figures that are all played by multiple Dufresnes. 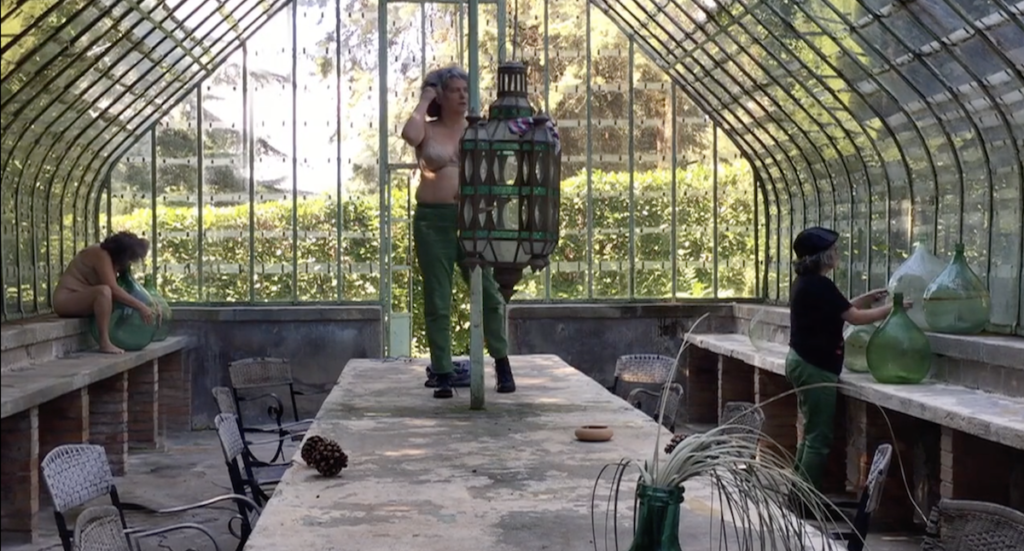 The artist’s performance transfixes the viewer in a space of vulnerability, while simultaneously embodying the personas of her favorite musical performers. Seeing the artist step fully into the passion of each of these songs, but only with the added element, of dancing and singing while sometimes nude. Addressing the action of covering Fleetwood Mac in the buff, I asked Dufresne about these works in relation to the show itself.

How do we access more of ourselves? Is it through who we think our “self” is? Hell no.

The video work allows for stepping into the persona and being able to embody it. These are the places where I can step into the histories and think about them as the same conceptual operation.

The video (and the paintings) are collage, and montage, getting a little closer to film and thinking about how to mash up place, time, and cultural production. They are covers. “Sarah” by Fleetwood Mac— as any good gay man I had to do a Stevie Nicks song. It’s like taking my love and my fandom for these people and folding it into the meringue of my daily life.

The gay man comment makes its appearance several times in our conversation. This is Dufresne’s tongue and cheek way to poke at the beast in the room — the art world itself is still predominantly a white straight cis-male boys club. The dominant narratives throughout history have been driven by these figures in a particular point of view. Yet with Dufresne, being a queer woman, especially one of a relatively femme presentation of self, is responding to a liminal visibility for identity within the art world and the larger society. 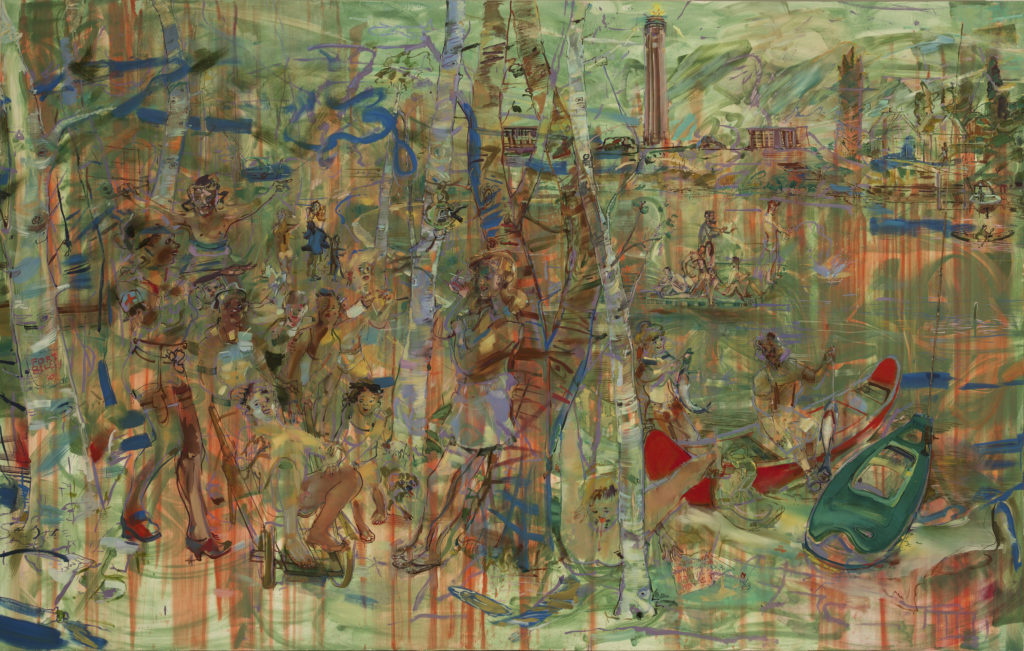 No Longer the Hazardous Forest, 2018 oil on canvas 84 x 132 inches Courtesy of the artist and Monya Rowe Gallery, New York

Dufresne is a confident and articulate painter. These fantastical scenes are handled with a prowess that gives the work a real sense of Big Dick Energy (BDE), a concept that insinuates the fact that, if you walk with a big stick, your confidence and presence is more effortless. The paintings themselves communicate through dripping and lavish brush strokes that swing across the canvas. We talked about BDE in front of No Longer The Hazardous Forest, a painting of the Kansas City WWI Memorial Museum and Monument. Stepping into one of these paintings is like showing up fashionably late and sober to a party that started hours ago. We can step into different figures in these works, as the scale is slightly larger than life. Dufresne invites the viewer to play with the push and pull of embodying these undulating, sometimes incomplete people. As the shapes and lines allow for a certain amount of dissolve, we get to fill in the blanks.

The utilization of color blends fantasy and earthly worlds, staging layers with appropriated compositions: movie references, mythologies, and muses. All of the works are covers or adaptations of narrative spectacle pulled from renowned painters of the straight-white-male historical canon and hybridized with Hollywood. Actor Gena Rowlands is a favorite of Dufresne, figuring largely as the star of the artist’s narratives. 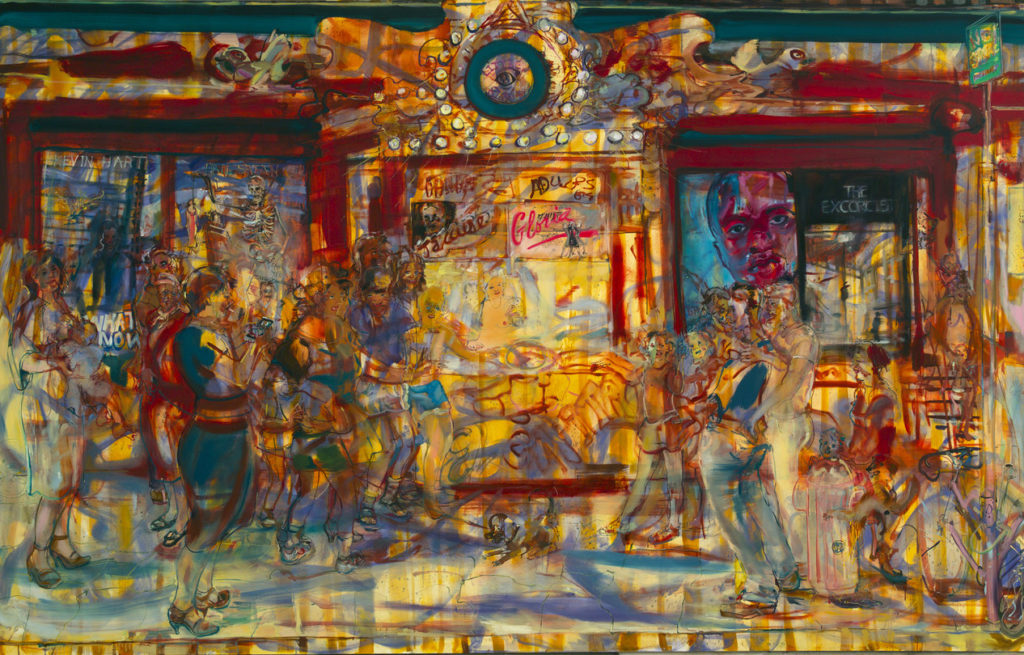 There’s a moment in Ticket Line where Rembrandt’s The Night Watch (1642) visually joins hands with the film Moonlight (2016) in front of a theatre, where the show begins. Dufresne describes the works as allowing for the viewer to step right into them and join in the atmosphere. There is no constant space, everything is shifting in an ebb and flow.

Rather having that separation between the stage and the audience, I am referencing that moment when Iggy Pop jumps off into the audience and it becomes this kind of dissolve. I am jumping out of the audience and onto the stage. I can construct to a certain extent the body that I need to navigate the world without being too utopian about it.

These lateral coexistences embody ambivalences. In this teetering space we feel crazy anxiety, desire, fear, loathing and exuberance all at once.

We moved on to Dufresne’s latest project involving a collaboration with opera singer Juliana Snapper and dancer Jack Ferver,  tracing the queer histories of the park surrounding the Kansas City WWI Memorial.

I had drawn up this image of lateral coexistence. I grew up here, and lived here from 1969-1991 I had lots of friends who hooked up at Liberty Memorial Park. I kept thinking about that space. I went into the museum and thought, this is so incredible to think about with all the contradictions in the movie, known as real life, known as WWI. I couldn’t help but think about the urgency of museums and other institutions that needed to get into the paintings. The work has been about films and histories and ideologies and all narratives of various intimate things from Gena Rowlands to midwestern mayhem.

The museum tells the story in all of its complexity how everyone was wrong in WWI to a certain extent. So this kind of lateral existence that became imperialist rational western hegemonic and a disaster that the museum beautifully articulated. To a certain extent I wanted to make a painting about that but also a painting about the inverse, where there’s a bunch of queers, straights, intergenerational, culturally different space, doing what they do, but not necessarily concerned with what everyone else is doing.

The memorial’s placement and phallic nature as a spot for gay cruising and hookups, the Grindr before Grindr so to speak, led our conversation to a slight, but a well-timed divergence into the idea that men appear to bear this fundamental privilege of using their dicks as weapons to walk through any door.

The whole thing was Big Dick Energy and the only time all the leaders from both sides got together was on the platform of that dick, now that we’re really talking, this is the opposite. The figure ground relationship is very confusing. It is purposeful that way. Its commenting on the idea that place creates people, people create place, and people are in a constant negotiation with what they are in relationship to the kind of emotional transmission of what’s around them. Not just bodies but spaces, objects, histories, and so on. The simultaneity of a space like that holds all of this history but doesn’t necessarily visually represent it but it’s all there. Like calling out the ghosts within it. 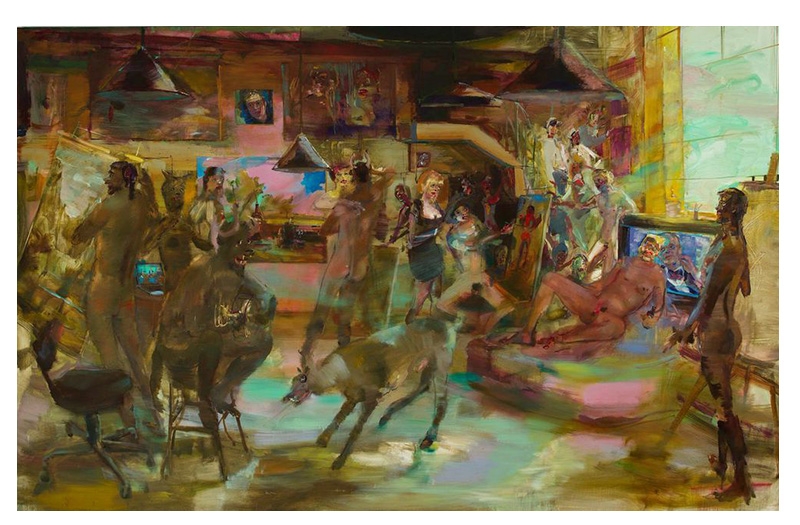 The Real Allegory of My Artistic and Moral Life, 2014, oil on canvas, 84 x 132 inches, Courtesy of the artist and Monya Rowe Gallery, New York

This ghost comment moved our conversation towards the spectral and sometimes monstrous muses that are present in her work. We walked over and stood before A Real Allegory for My Artistic and Moral Life. A painting featuring ochre-green figures, haunting the field of vision with yellow eyes and various adornments of mythological darkness. Dufresne referred to these figures with humor as wolf guys and we moved along to compare this work to four small portraits of Gena Rowlands, diving into the divide between a muse and a monster.

I don’t think there is one. They are interchangeable and there are a lot of them. As a method  I am trying to learn how gesturally Gena does her magic — which is to pack 4,000 ideas, emotional shifts, thoughts, into a second on film.

We continued discussing muses, specifically, Gena Rowlands and the actor’s central role in Dufresne’s work.  I asked “In our attachment, to these ideas of power in the muses, those attachments are what make them into monsters?”

It’s very purposeful. When I am drawing, I start making marks and I am trying to actually render something, and then there are times where I just want to make a mark and follow what it is telling me that it actually is.

While the process of trying to capture Gena Rowlands on-screen presence may be a powerful starting point, these figures mutate and become something else, in our attachments to attempting to remake these sensations, Dufresne recognizes the breakages in the moments where expectations don’t meet reality. And in a way, that’s where the magic happens.

Giving myself the space to imagine the things that don’t exist.

When you follow the figures and forms in these paintings, you get pushed out and pulled back in through color and the visceral seduction of paint. Our embodied sense of existing in space is no more concrete than the cobalt blue outline of a body on an opera rose pink ground. We become vehicles for adjusting to a sense of place and time through our relationship to the point of entry or envelopment — and opposing that, the monstrous point where we’re pushed out. Parts of identities are found through the coexisting places, histories, and personas through which we willingly choose to perform our covers. At the same time, they hybridize and become our grounded place in the floating world of who we are. When the figure of your own life is losing its sense of ground, it is important to reframe and look back at the magic of Gena Rowlands and Stevie Nicks. The conversation ended with Dufresne stating that one shouldn’t forget the importance of karaoke.

You need two to three solid hours of “Edge of Seventeen” per month to lose your voice.

These moments are where we and Dufresne complete the scene together, stepping fully into those versions of self to gain a grasp on who we want to become.

Angela Dufresne: Making a Scene runs from September 20th 2018 through January 6th 2019 at the Kemper Museum of Contemporary Art. Please check out the Kemper Museum website for times and programming that include guided meditation, performances, and film screenings.