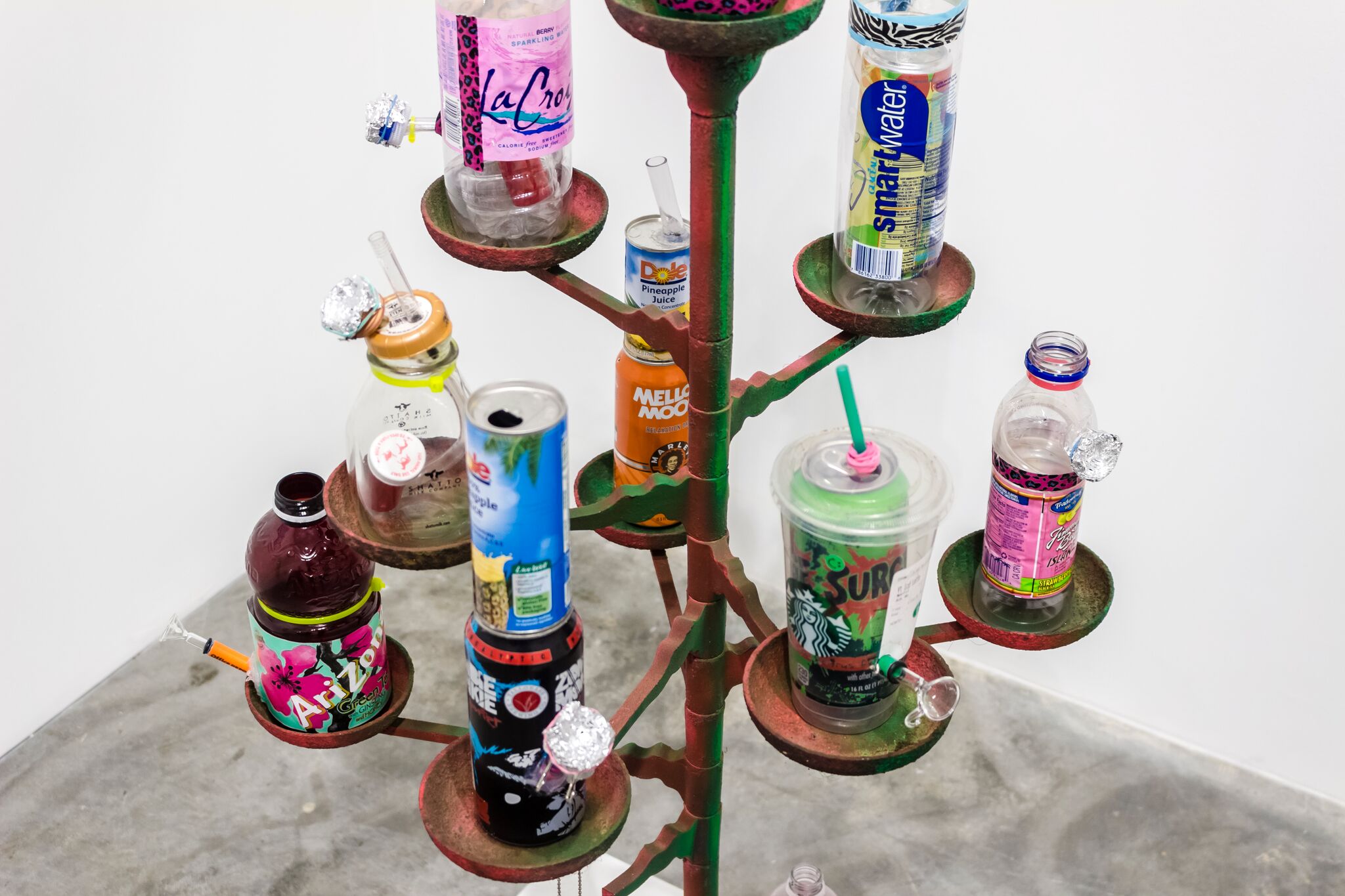 Justin Beachler has maintained an internet persona that, through an endless visual and hashtag time suck, evokes an addict-like deadhead figure that oozes pitiful, basement masculinity. Over time, Beachler has formed physical manifestations of this persona through immersive installation practices. However, the exhibition Old and in the Way, at Haw Contemporary, is the first time I have witnessed the conversation between screen/object occur under such “normal” conditions as the commercial gallery space.

This collision, between internet-persona, artifact and white-cube gallery, is not an uncommon one; plenty of galleries are scouring Instagram art in order to produce new art show content. However, it is rare to come across such work at local commercially motivated spaces. Beachler’s show was in a small gallery at Haw Contemporary, and in the corner of the space was Scum Rigs: a tree of colorful bottles and La Croix cans, pieced together with tape, rings, and small totems. The sculpture sits below eye-level, it does not overwhelm you, and looks like garbage; the viewer literally looks down on it, and in doing so, one begins to find patterns at work. The flecks of trash are pipes: Their color and rigorous carelessness implore the viewer to touch them. These objects are slap-happy yet quietly depressing: Where’s the party? Did it already happen? Is it going to happen? Like a college dorm filled with pasty bros and their empty liquor bottles, Scum Rigs is both a commemoration of consumption and a poignant showcase of the sad male. While both bottles and pipes get passed around, the construction of Beachler’s pipes in Old and in the Way suggest attentiveness to the anti-social aspects of consumption, and perhaps addiction, that is both humorous and vulnerable. In this way, Scum Rigs simultaneously showcases the residue of Beachler’s persona, use/performance with the object, invitation for others to perform, and our own consumptive tendencies as viewers.

Beachler’s Instagram account is a constant and consistent report of “shit posts” that begin to speak back and with one another. The colors, objects, and forms begin to weave in and out of each screen, developing compulsive compositions. These generate visual traces that work at altering loaded consumer content by way of repetition and erasure, yet produce a figure (persona) behind the work/posts that may well be a cis-het white divorced dad that believes The Dead never broke up, and is always trending “one step behind the kids” but ready for the apocalypse. Beachler imagines and paints a depressing, flattened, but constantly reworked picture of an internet breakdown as understood by someone who still believes Microsoft Paint is the best creative tool at hand. This figure, arguably, displays a kind of vulnerability that only the internet can produce: one that is unabashed about guilty/not guilty pleasures and uncomfortable personal opinions, all the while safely tucked away behind LEDs. And, this is where Beachler’s persona is complex: while he may be ironically gesturing toward 20-something art bros who create internet-style Arte Povera, he still makes the work. Again, if the visual “fuck you” were a one- off, we may comfortably “locate” the process; however, Beachler’s repetition asks us to question sincerity, even in jest.

To see one Instagram post, on its own terms, may not mean much: one has to follow the work, see timecodes on posting, the rants on the art world mixed in with ironic cultural critiques. Yet in this visual/textual collision, Beachler understands the medium of Instagram acutely: Knowing that these images will always display in a series of nine, as one scrolls infinitely on his feed, there is an aesthetic flow. In this way, Justin’s work requires time- between us- in order to understand the totality of his visual world. For me, interest in the Instagram/Facebook performance lies not within the seemingly shitty posts, but the performative logic behind the images; it is in this logic, that content and visual coherence emerges.
Similarly, Scum Rigs requires all of the objects/bongs to be present in order to develop visual and conceptual content between them. It is in these interconnected relationships that the performative aspects of the work engender discomfort, as we begin to imagine the figure behind the work, the pathetic male who cannot quite securely understand his own stoner- meandering and making.

[Viewers] Engaging in the digital and/or physical “present” may not be the best word to locate the work, nor is presence: as both are used to describe a performative moment; rather, his is a troubled, certainly not stagnant, art whose affect may more aptly be described as objects “at rest.” They are in between: relics of performance practice, yet invite the viewer to pick up and hold, smoke, and throw away; creating a unique condition of physical intimacy with the work.

The relics that make up Scum Rigs are shrine-like, not quite tongue-in-cheek nor one-liner, as an overall attentiveness to the objects breaks away notions of imbued irony. Maybe Justin wishes the work to present as careless, but, like his Instagram posts, it doesn’t, and can’t; the commitment toward making is too neurotic. We can see decision making in how color is applied, tape is wrapped, how the objects are balanced within the sculpture. In these moments, the relationship between performative hand and visual mark become clear, the divisively pathetic yet aesthetically acute fuse. So, with sticky vibrations, the work sadly rests. However, the presumed “pathetic- aesthetics” is not inherently a problem. Plenty of cis-het white male artists have worked with tensions of failed masculinity: Acconci, McCarthy, and Kelley (to name a few) have all performed “pathetic male.”

Scum Rigs’ corporate bottles-cum-pipes directly attends to the line(s) between the online persona and object materialization. Specifically, the use of La Croix cans makes mention to the company’s resurgence among both Millennials and those who are looking to “cut back” on drinking (Mary Choi writes an op-ed piece on her hilariously serious La Croix addiction here). Within the context of a for-profit gallery, Beachler’s dirty physical repository for an ephemeral practice dramatically calls attention to how “feel-good” and comfortable art culture can become gutted, gnawed at, and perverse. The physical object by way of durational online work, Beachler’s Scum Rigs pushes us to consider complacency within our aesthetic consumption practices: ways in which we perpetuate awful aesthetic styles through comfortable Kansas City buying power.

The white-walled, track-lit rectangular space at Haw Contemporary may actually provide an uncomfortable impact and humorous reflection on Kansas City’s aesthetic tendencies toward provinciality and normalcy. These performative “in between objects”—used up yet simultaneously imparting our attention by way of repetition and physical care—are the result/invitation of a persona that dives deep into a tie-dye highlighter palette of irreverence, fading, falling out, addiction, obsession, and regret; reminding viewers that we are not only complacent, but encouraging. Proposing a consideration of a kind of shared solipsism often only reserved for solemnly fingering through shit-post internet/Instagram archives while getting fucked up with “friends.”