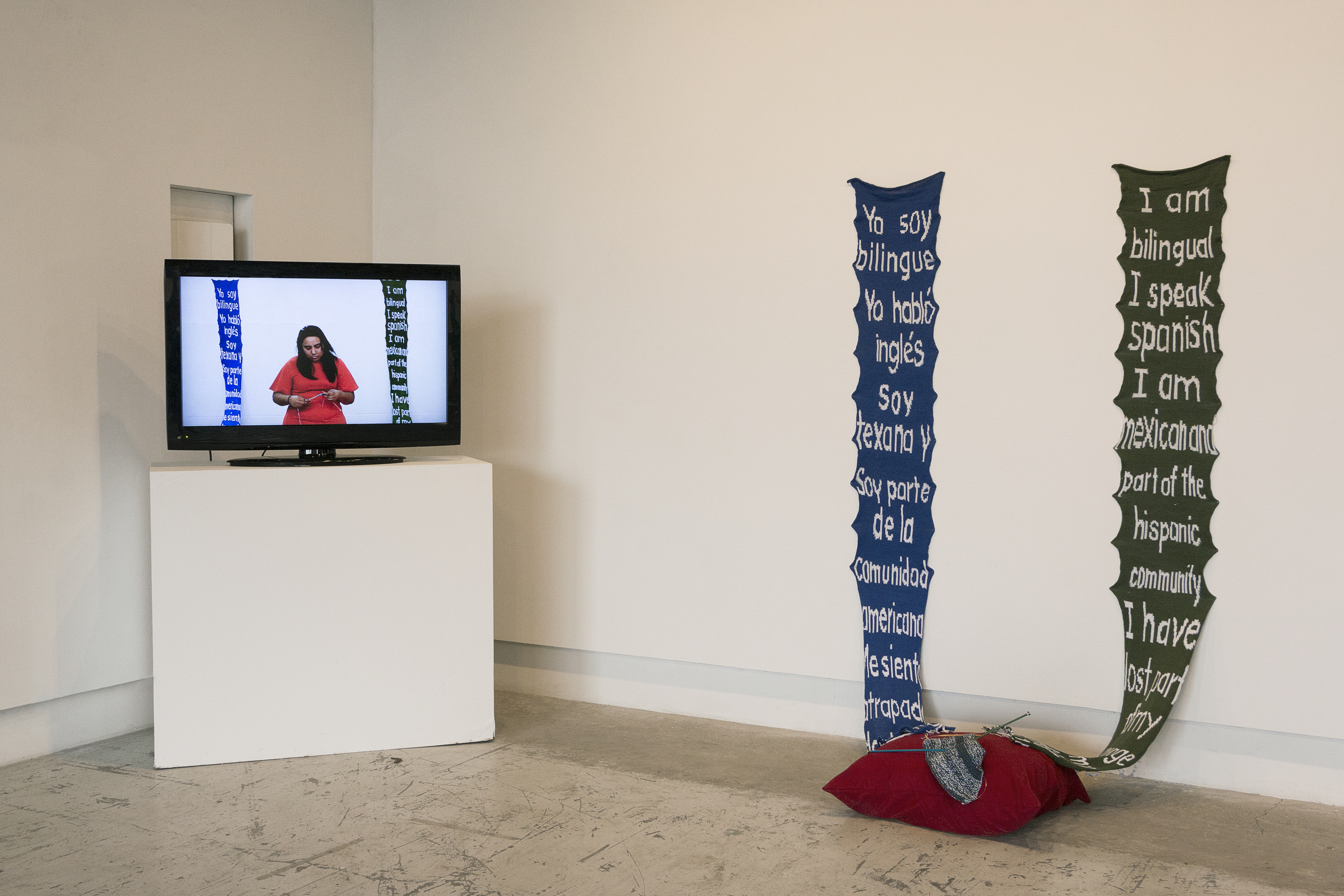 In Reflection: Lizbeth Contreras and Diana Lerma in Bricolaje

‘Yo soy Mexicana y soy Americana. Pero soy, ninguno de los dos,’ Diana Lerma speaks these words in her video featured in Bricolaje at La Esquina. There is a famous fictional comedic character in Mexican cinema named La India Maria, one of her movies is titled ‘Ni de aqui ni de allá’ (‘Neither from here nor from there’). Lerma’s quote from the video made me think of this phrase. Growing up, I didn’t fully belong to either the Mexican community or the American community. As I grew older, I felt the separation from both communities more and more. Lerma’s practice draws inspiration from a similar upbringing, growing up in a bilingual household in Houston, Texas.

The two textile pieces near the video hang on the wall with a red cushion on the floor holding an in-progress knitted piece, the same setup seen in the video. The textiles read as follows:

When I read these words, I felt a rush of recognition; I saw myself being described in the words written by someone else. Lerma captured the feeling of so many of us, children of immigrants, stuck in an in-between. Whether brought at a young age or a natural born citizen, we live in a country to which we do not fully belong. Oftentimes, the dichotomy between the culture we are being raised in at home is in stark contrast to the one we are immersed in our daily lives. This has created a divide within ourselves. Standing before this piece, I realized, not for the first time, how many of my peers grew up with such a similar experience despite our seemingly diverse environments.

In the video, you hear Lerma’s voice whisper the words from her textile pieces. She is seated between them knitting; so much of what she says is relatable. At one point, she says ‘Estoy perdiendo mi español’ (‘I am losing my Spanish’). She talks about how she’s afraid of losing herself, of feeling lost in English and moving farther away from who she was at a younger age. This has always been a subconscious fear of mine, losing my first language, and being unable to communicate with my family. Within my family’s circle of friends, there are many whose kids don’t speak Spanish well and some who don’t speak it at all. My parents have always been proud that my sisters and I speak Spanish fluently and correctly.

How disappointed would they be if I were to forget their language?

In another instance, Lerma speaks about the existing barrier between her and her family, specifically in terms of her art practice. This is something that I feel happens to me; although I have the full support of my parents, I’m not sure I have ever been able to truly share with them what my work is about and how big a part of it they are. Although I speak Spanish fluently and can communicate with my parents without a language barrier, art language, as an obscure and specialized form of English, prevents me from being able to tell them about my work in a way they might understand. I don’t have the International Art Spanish to communicate this with them. Additionally, I am afraid they might feel bad, especially if they don’t fully understand, that despite all their sacrifices and efforts to give my sisters and me everything they could, there were also many struggles that I had but never shared with them.

Last October, Lerma was part of a show at Front/Space, Tienes Hambre? in which she selected dictionary entries taken from Vox Compact Spanish and English Dictionary. She stenciled inky texts onto the north and west-facing windows of the gallery, covering the glass completely. Some of it smudged by Lerma herself during her opening night performance, she selectively chose which entries to erase, as commentary on the selective obliteration of her past, assimilating into the general societal norm of whiteness. This performance was in conversation with the work in Bricolaje.  The storefront setting, to me, seemed to add on a new significance of being watched and observed while working through such a personal journey. When I was younger, between elementary and middle school, I felt the urge to assimilate, I wanted a sense of inclusion in a predominantly white school. In addition to this separation from most of my classmates, there was also a difference in socioeconomic status that I was always very aware of. The layers of difference separating me from my classmates caused me to create a barrier that never truly allowed me to be my authentic self.

Between these two works alone, Lerma manages to not only capture and visually represent the collective history of her peers in similar situations, but simultaneously provides an outside viewer an informative glimpse into a topic they may be unfamiliar with from a first-hand perspective.

In a similar way, Lizbeth Contreras gives a vague point of view in her piece Behind the Border, however, the obstructed view of the landscape gives a literal and symbolic representation of what it feels like for families who are unable to see their loved ones.

Contreras’ works range from quilts to weavings to soft sculptures. Through her use of natural dye color as her palette, specific imagery and patterns, she creates work that has a certain feeling of familiarity that brings a sense of longing, reminiscent of something missed out on. Even though the work invites every viewer in, these specific recognitions give it an extra layer to those of us who understand what Contreras is alluding to. Although many of her topics seem to be described by a lighthearted and playful use of tone, shape, and abstraction, she also suggests more serious topics. Seeing how personal her work is, her own presence within each piece is essential in order to portray its narrative in its entirety. Additionally, her use of natural dyes pays tribute to a long history of this practice from Mexico, perhaps marking her desire to draw a stronger connection between her work and the cultural history behind natural dyeing.

Contreras’s piece in Bricolaje is titled Behind the Border. For anyone paying attention to the news, the political climate surrounding immigration has been a prominent subject. DACA recipients have been living in a state of uncertainty and the community at large has been troubled with the fear of separation. The black vertical stripes breaking up the blues and yellows of the textile create a scene of one looking through bars. As a daughter of immigrants, the significance of this visual resonates with me. Aside from the literal reference, this scene also takes on a symbolic meaning. For those who live in this country undocumented, seeing any family living in a different country is difficult and often impossible. Living in this type of situation can feel as though you are looking through the bars of the border, trapped inside your own freedom. I’ve never asked my parents about it, but that’s how I thought I would feel if I were in their position. Although they chose to come here, I don’t believe that it was an easy choice to make, knowing full well that you may never see some of your loved ones again.

Contreras and Lerma both bring a unique yet relatable perspective to these contemporary subjects in the Latinx cultural experience. They use a level of intimacy that exhibits their vulnerability in sharing personal experiences with a large public. Where Lerma creates a straightforward narrative that leaves no question she is telling her own story, Contreras decides to let the viewer choose which perspective to take. The intricacies of individual lives are so many, yet these artists’ narratives are rooted in a shared history. This connection to one another is what allows these works to have the impact they do.