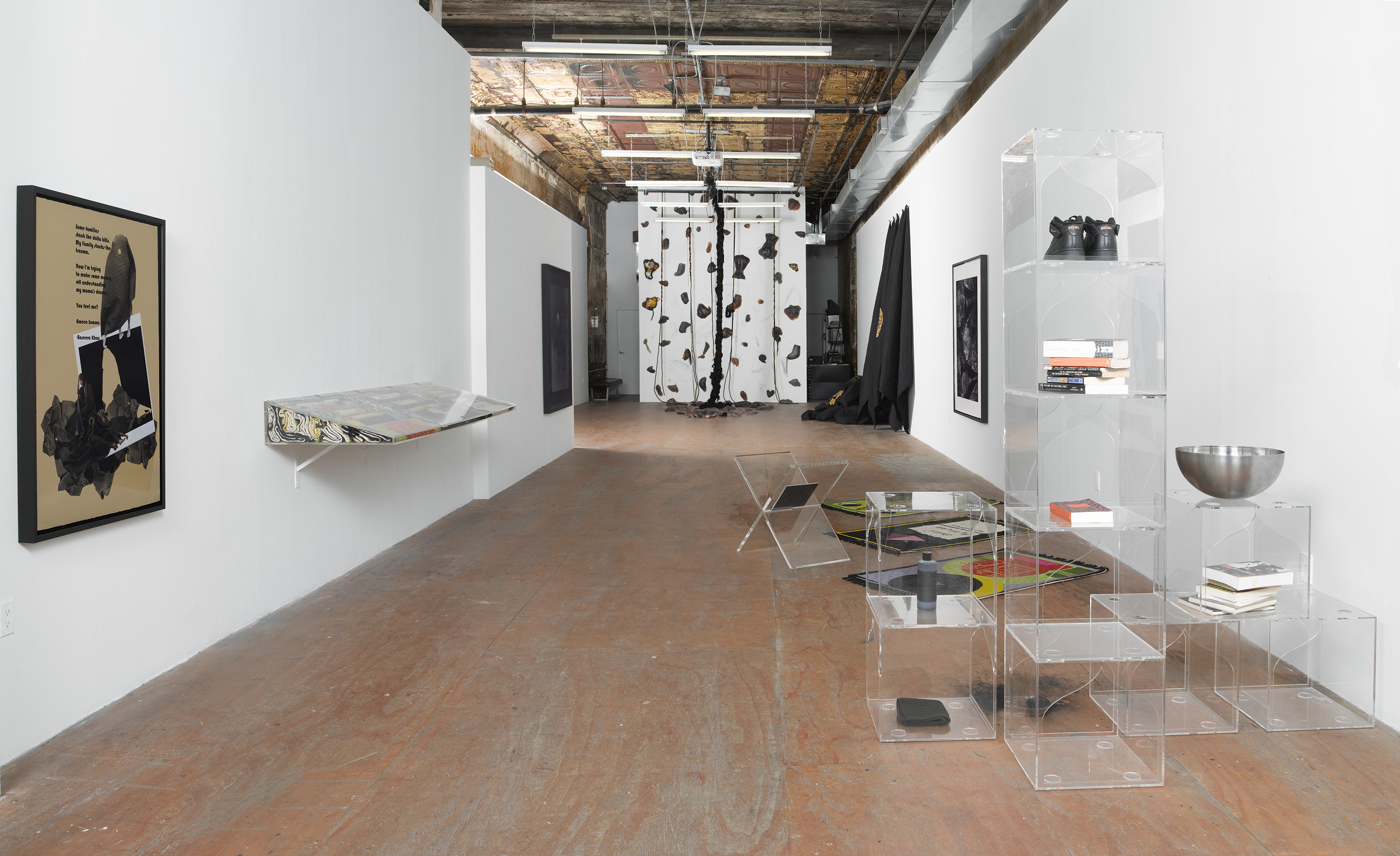 Inside iamuslima: An Interview with Baseera Khan

Baseera Khan just had her first solo show in New York City, iamuslima. Khan presented work that packages her social and personal identities with familiar spiritual objects and family archives. Her anxiety of deep rooted historical trauma matches her concerns with the politics of immigration in America. Khan’s method to create sculptural endurance performance works, all in relation to her body, attempt to manage and think through, “what’s next?”

The first piece seen at the forefront of the exhibition was a pair of Nike Air Force One Mid-Top sneakers designed by Khan through the NIKEiD project. After hearing of a lawsuit against Nike for not allowing the word “Muslim” to be embroidered on these customized shoes, Khan sidestepped the blockade by altering the word. She calls this strategy “misspelling on purpose”, and had iamuslima inscribed onto the shoes instead, this manipulated word directly referencing Khan’s identity as both a Muslim and a woman. These shoes were also a document from her performance during the opening night of the exhibition where she walked around the space in the shoes, and then placed them atop the stack of acrylic boxes also seen at the forefront. These boxes were meant to function as an invitation for others to take their shoes off too. 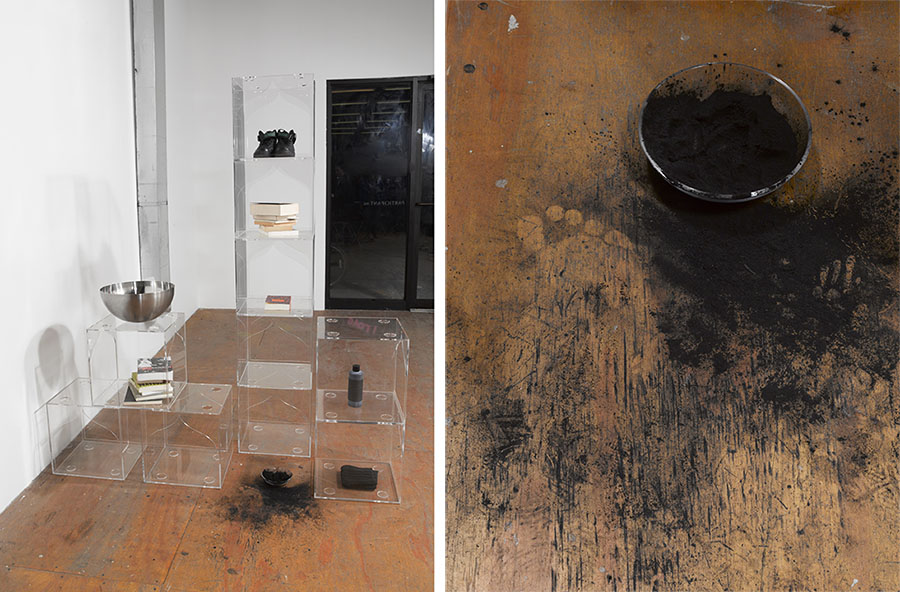 Images courtesy of the artist.

She then proceeded to perform ablution with a bowl of black chalk nearby, readying herself to climb a synthetic rock wall installed at the opposite end of the gallery entitled Braidrage, leaving chalk dust footsteps behind. The rocks were made from resin molds of the corners of her body with chains and locks of hair embedded into them like DNA. Traversing vertically a white wall, via the corners,  Khan climbed as high as she could until utter fatigue, leaving yet another residue of black chalk against the wall. Traces of her presence remained throughout the entire run of the installation.

The Acoustic Sound Blankets placed in the exhibition were worn by Khan in several prior performances that speak about safe spaces and intimacy. Individuals were invited to come under the blankets with her, offering protection against assaulting sounds. There are Psychedelic Prayer Rugs — created collaboratively — colorfully designed by Khan and fabricated by people residing in Kashmir, India. After visiting the exhibition for an artist talk, I wanted to probe the artist further about the context of her practice.

Khan expresses the importance of community when making her work. I asked, with her work primarily exploring themes her own identity, being a Muslim queer woman of color, how then does she engage or build a community in the process of making work? How does this community then support the practice of understanding one’s own identity?

“There was a large group of people that came together to help me with this exhibition.” As a teacher at Parsons, many former students came together to help Khan with her exhibition. In return she would plug them into jobs or they were given school credit for their assistance. All of these students were also queer people of color,  which was important for Khan. “It gave me an opportunity to create an environment of people where, while we were making the work, we could have an ongoing conversation about our feelings and topics that extended beyond the classroom discourse.”

A longer arc of conversation took place when producing the Psychedelic Prayer Rugs. This idea, to travel to India and collaborate there, conjured when Khan’s father passed away and her mother came to live with her for some time. “I was trying to find a way for her to enter into my world,” continuing to practice engaging the community with her work. She took her mother to Parsons, toured the design classrooms together, and while Khan taught class her mother actually helped embroider designs for the Acoustic Sound Blankets. At some point they came to realize this task was not something they could do alone by hand. Thus, they traveled to India and were able to connect with artisans to help produce some of the embroidery in Khan’s show. This is when they discovered the ideas behind the Psychedelic Prayer Rugs.

Khan comes from a lineage of people that have always worked in pedagogy and textile construction. Teaching is what she wants to sustain her livelihood along side her studio practice. Her engagement in this way is most important, and if the work she continues to make sells, then she would be even more able to provide resources for the community she is surrounding herself with. “You start to learn about how to be a leader or how to truly be in a community, and how to form your own family.” Khan, as a teacher and a leader, is a strong example for students and artists to form more empathetic environments for people with religious differences, or differences at all, as she builds and engages her own community. 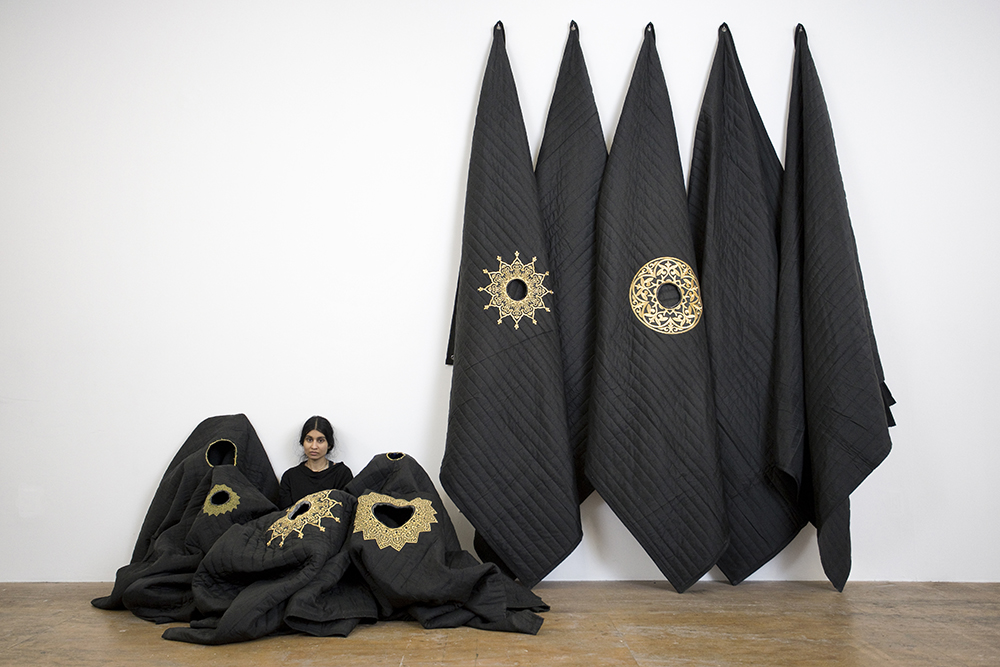 Acoustic Sound Blankets by Baseera Khan. Image by Maxim Ryazansky and courtesy of the artist.

Many of the materials used reference the body, and are re-used and employed in different ways. The Acoustic Sound Blankets, for example, have many iterations, engaging a community and creating safe spaces. I asked Khan, how do the materials evolve and continue to reference your body and other bodies?

Khan feels very assaulted by sound, admitting to having an astute sense of hearing which makes her sensitive to it. The acoustic blankets are a soft space that minimize the sound coming at you. They were “A micro geography you could slip underneath, to have reprieve from sound violations, from sound terror you hear everyday– you know, the city is crying and vibrating constantly.” Her interest in understanding military architecture led her away from the exploration of physical architecture of a space and instead brought her focus to how sound controls populations of people, like the call to prayer. “Sound is a way we are controlled; it is a cue to do certain things; it is very pavlovian. I wanted to repool myself and find my own affinity groups. Instinctually, the way to do that was to create a vacuum” for these sounds.

She would invite people underneath an Acoustic Sound Blanket in these performances, activating a space of intimacy. She would gauge interactions based on their comfortability, offering to sing to them, mostly. The acts would continue as well as the two people engage by looking at each other and hugging, turning the micro geography into an intimate environment. She even wore one of these during the women’s marches that occurred in New York around the time of the inauguration. 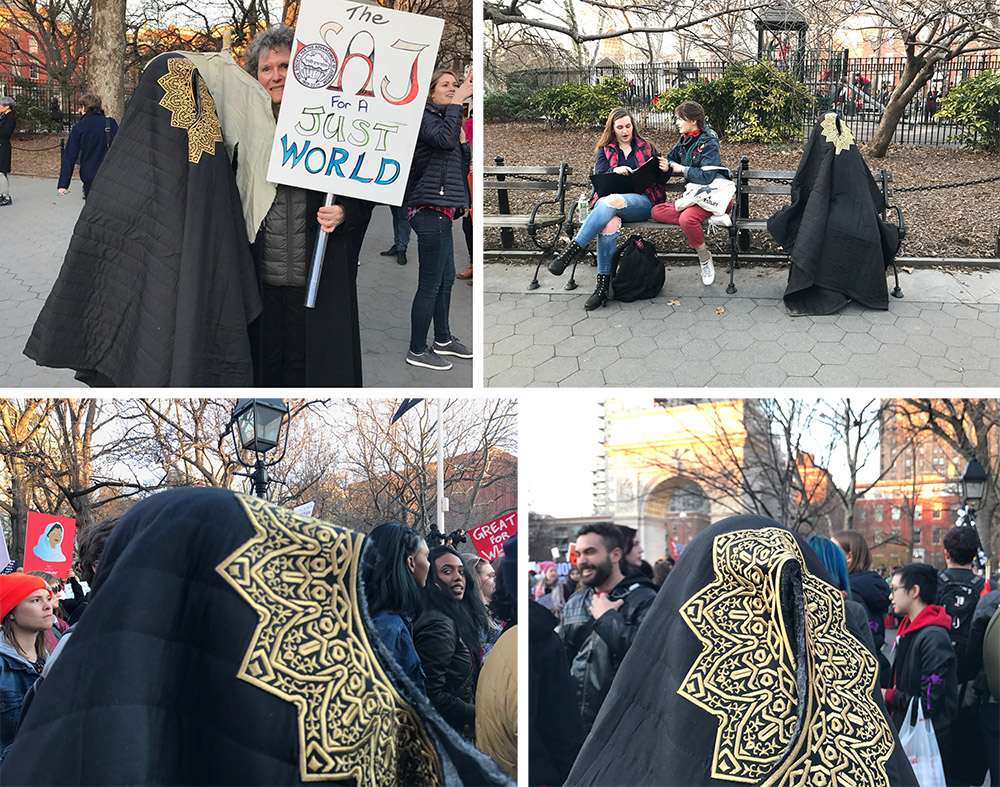 Images of Khan wearing an Acoustic Sound Blanket at the Women’s March in NYC. Images courtesy of the artist.

Along with these performances is an aspect of a “social construction of how we have expectations of each other, in regards to all the chaos happening in response to class and race.” Khan told me, “I wanted to do something and be present, but I didn’t want my body to be present. To mask myself in this kind of acoustic geography was a way for me to be present, you can hear my voice, but you cannot see my body.” 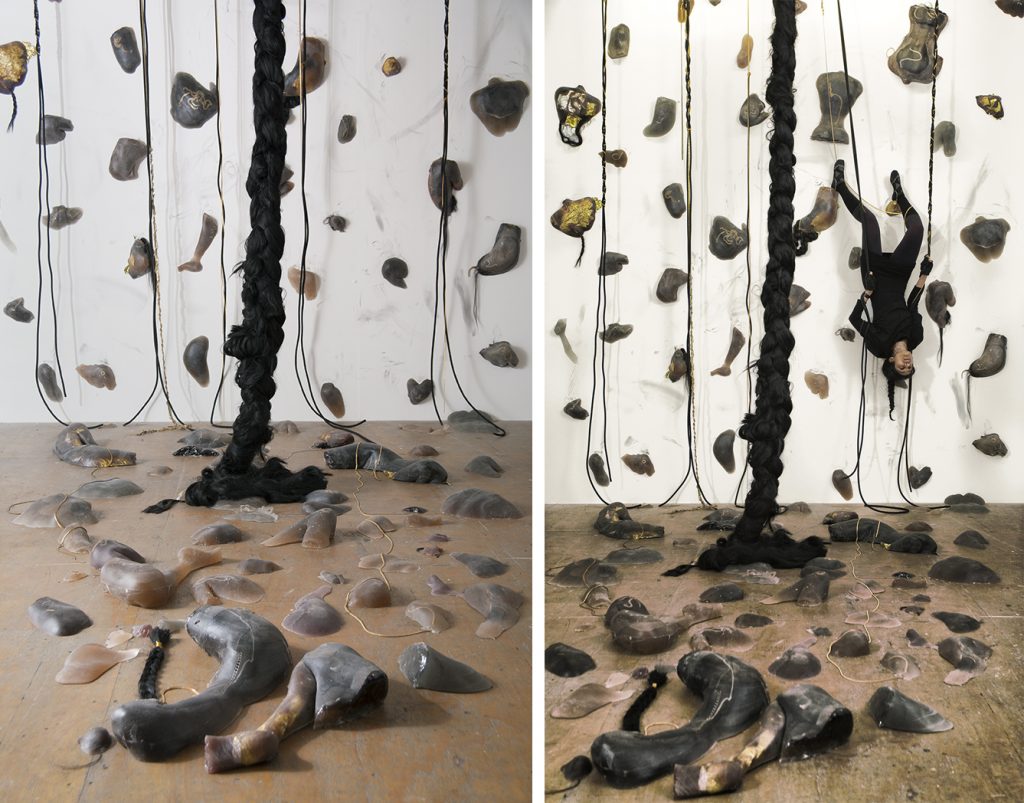 Braidrage by Baseera Khan. Image by Maxim Ryazansky and courtesy of the artist.

In regards to the rockwall, Braidrage, there was an idea formulated here about performance and endurance with exercise wielding a way to combat the anxiety from deep rooted historical trauma. I asked Khan, how is exercise a part of the your daily practice and your artistic practice?

Khan asked herself “How can I sustain myself making work that gives me something in return? I want to have fun, I want to be social, I want to be healthy.” This spawned from an unhealthy relationship she was having with her art practice. She was interviewed for the 2010 Whitney biennial, but she realized the work did not build a community and that the paintings she was making at the time left her hands, were misinterpreted and she felt had become instruments for neo-liberalism. She decided to go to graduate school at Cornell to study, and while she still made a lot of work, she did not engage like before, leaving the fourth wall up. “Exercise became the thing I learned was what I needed 2014 as I watched my father and brother and mother’s health devolve. Toxicity is not a normative narrative, I think it is linked to colonization and displacement and the patriarchy and I wanted to do something about that and control that narrative in my work. And if I wasn’t doing that I didn’t want to make work.” In this way, she explains in her bio, strategies for decolonial practices.

Khan attended the Skowhegan residency soon after this realization which played a large role in pushing this idea. The residency facilities had a sound booth which led her to the creating of the Acoustic Sound Blankets as well as other performances during the residency. The environment of the school in general promoted exercise. “I was so healthy…I started to employ exercise in artistic ways as a way to manage trauma…and I do projects based on exercise as a medium.” The gym became the studio, where Baseera could use running as a medium and then used climbing in Braidrage; the performances becoming about endurance. Presenting the artist’s body in two forms in Braidrage exemplifies a colored body traversing a vertical plane, pressed up against a white background. “I wanted to see what a woman of color looked like pushed up against a white wall, and see how far she could go.” 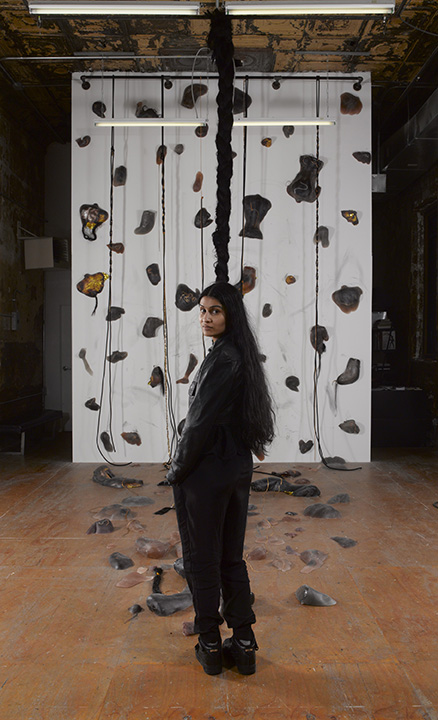 Baseera Khan in front of Braidrage. Image courtesy of the artist.