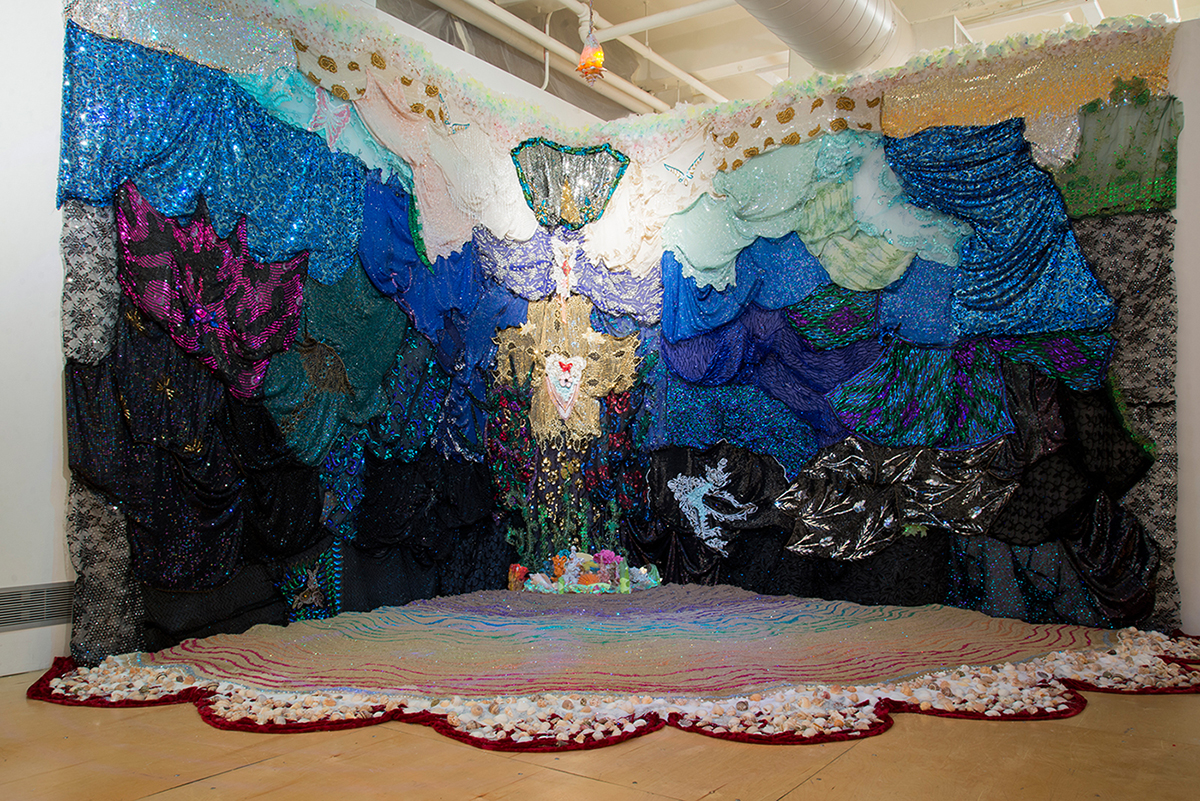 Amy Hixson talks to Jacquelyn Carmen Guerrero about reclaiming a space for queer bodies of color through her ornate fiber installations and experimental performances.

Jacquelyn Carmen Guerrero (a.k.a. CQQCHIFRUIT) is a DJ, musician, performer, and visual artist based in Chicago. Guerrero has performed and exhibited across the U.S. and internationally in Cuba, Mexico, and Canada. Guerrero is a second generation Cuban and Puerto Rican American originally from Miami, FL, a multicultural city that is home to many diasporic Caribbean communities, who keep their social and cultural practices alive and visible. The driving force of her practice is rediscovering her heritage as a second-generation American and through DJing, experimental performance, and immersive installation. Through these processes she reclaims her queer Afro-Cuba-Rican identity in all of its complexities. Guerrero fosters safe spaces for the personal expression of People of Color and queer-identifying people, using her practice as a DJ, an artist, and an organizer of Chances Dances—a queer dance party and collective in Chicago—to create a home for “The Other.” 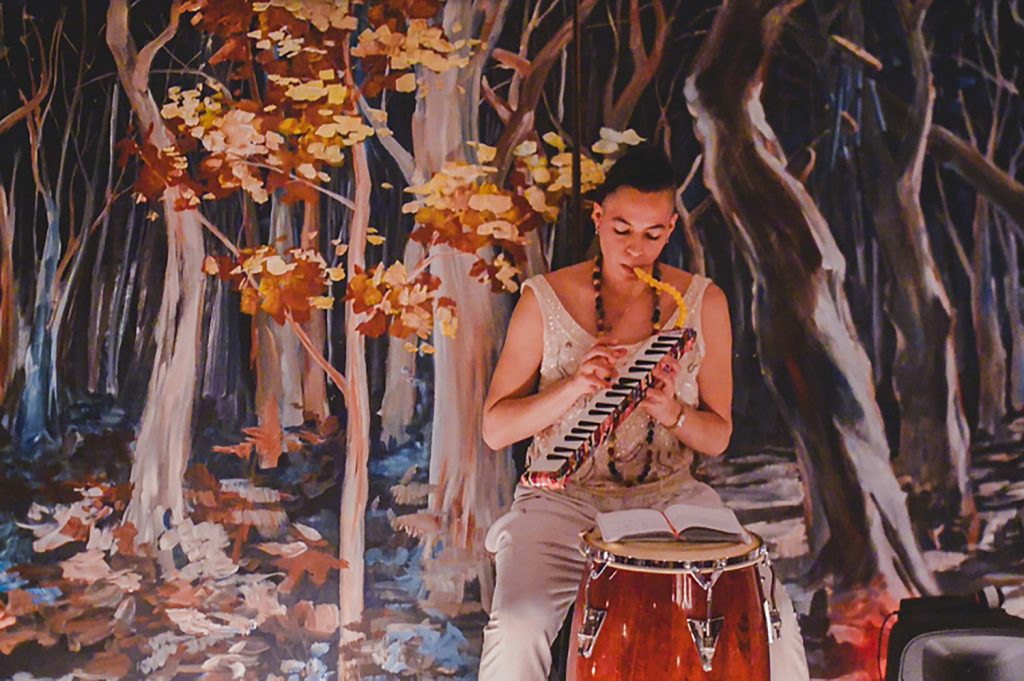 AMY HIXSON: You mention that your work “revolves around (re)discovering and (re)claiming [your] cultural, spiritual, and artistic heritage as a queer Afro-Cuba-Rican from Miami.” Will you elaborate and expand on what you mean by rediscovering and reclaiming in your work?

JACQUELYN CARMEN GUERRERO: My intentions of rediscovery and reclamation stem from my personal need to reconnect with my cultural heritage as a second-generation American, and how that need has evolved into my artwork. My parents immigrated to the Bronx from Cuba and Puerto Rico, and then relocated to Miami, leaving most of their immediate family behind. I grew up disconnected to the aspects of traditional, non-Christian, Afro-Cuban and Puerto-Rican culture. And I also definitely wanted to be white for at least part my childhood. As a result, much of my work now revolves around rediscovering and reclaiming the parts of my heritage that were inaccessible to me early in life, while simultaneously undoing the internalized racism and misogyny that has stemmed from oppressive forces like colonization, assimilation, and Christianity. 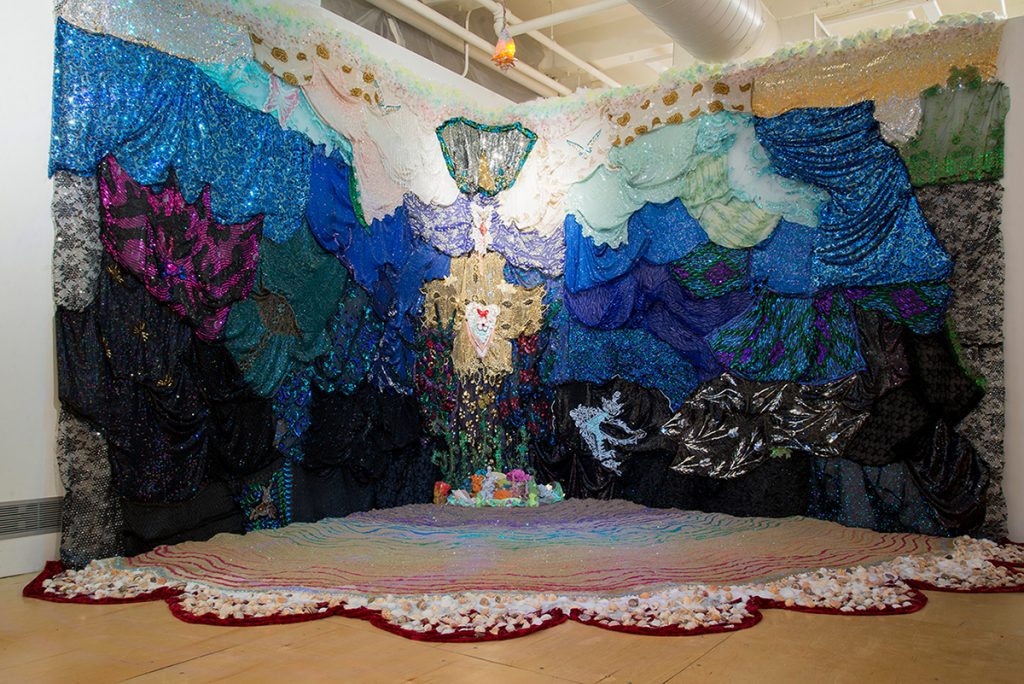 AH: There are many references to Santería deities particularly Yemaya, the Mother Goddess of the Ocean, and ritual practices specific to Afro-Caribbean religions and spirituality. What is your consideration for the viewer, and those who might not have any background knowledge of Afro-Carribean practices?

JCG: My work references a few orishas to those who know what they signify, and the ritual explorations in my performances derive from my interpretation of and inspiration from traditional rituals (of which I admittedly have a limited understanding). However, I am not a practitioner initiated into Santería or any other religion. And although this is a part of my heritage that I am very interested in engaging with spiritually. Artistically, I can’t speak as a representative of that spiritual culture to people are unfamiliar with Afro-Caribbean spiritual practices. The presence of these spiritual systems in my art practice has organically blossomed as a product of my processes, and I am now embracing spirituality as a focus of my work.

For example, my fixation on sequins started as a product from my days in the burlesque, dance, and theatre world. For ¿Qué Pasa, USA?, I gathered garments that will eventually be used to create the tapestry that will be in the exhibition. It wasn’t after I was already creating this work that I learned beadwork is an important part of the Yoruba and Taíno traditions, and that some of my family members continue to practice this religious art. That was a truly amazing discovery to me! Since then I have given much thought to the function of art as a spiritual practice, and the relationships between artists, shaman, and healers over time. I hope that my work finds a way to bridge those gaps, and viewers come away with a conscious or subconscious connection to natural and divine entities such as water, a goddess and/or the sky. 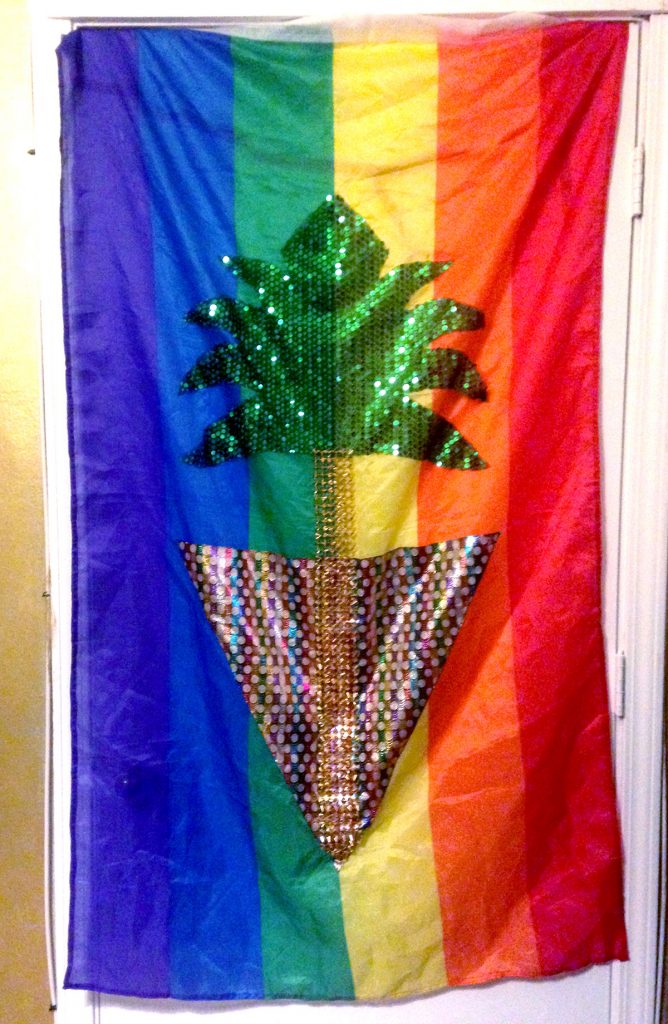 Trqpiqueer by Jacquelyn Carmen Guerrero image courtesy of the artist

AH: Your work is based on your lived experience based on your heritage, your hometown, and your gender identity. How do you approach and conduct research? How does your family and those in your community directly influence your artistic practice and daily life? What other artists are you looking at?

JCG: I conduct research through a variety of methods. I am very much into academic & scholarly research, for example reading books such as TAíNO: Pre-Columbian Art and Culture from the Caribbean (El Museo Del Barrio, 1997) and Los Bailes Y El Teatro De Los Negros En El Folklore de Cuba (Fernano Ortiz, 1981) have had a huge influence on my art practice. I am interested in oral history and begun to more intentional about collecting stories from my abuela and other family members, specifically digging deeper into my family history and stories about immigration, culture, and spirituality. I have pursued traditional knowledge from learning to play the conga and other Afro-Cuban percussion instruments and taking Afro-Cuban dance classes and workshops. And, I plan on traveling to Cuba and Puerto Rico to continue my research on folkloric and indigenous traditions.

My family, and those in my community, definitely motivate me to continue in the direction I am going in, which is preserving and honoring my culture through art. As I undergo these investigations, I am lucky enough to have my sister Jasmin Guerrero and her partner Enzo Moscarella, who are also artists, close to me. I look to a combination of artists from the past and artists of the present: ancient Taíno Indian artisans, traditional performers such as Celia Cruz, La Lupe, La India and Celeste Mendoza, visual artists such as Belkis Ayón Manso and Frida Kahlo, musicians such as Las Muñequitos de Matanzas and Yoruba Andabo, traditional folkloric dancers and artisans of the Yoruba, Vodou and Native American cultures, and contemporary performers such as Hattie Mae Williams, Keijaun Thomas, Sofia Moreno, Nic Kay, Rashayla Marie Brown, art and social justice collective such as For The People artist collective, and so many more.

AH: DJing is an important part of your practice and a way in which you build and deepen community. How do you approach your DJing practice as part of your artistic practice? Can you elaborate on the relationship between the two?

JCG: DJing has grown into a part of my public practice partly because I learned to DJ when I was blossoming as a performer in Chicago’s underground queer nightlife spaces. Going out dancing became (and still is) a very important part of my life because I was encouraged to express myself in a number of ways (looks, dance moves, etc.), which lead to more artistic expression. DJing became a way for me to experiment with energy; music and sound are important tools to create energetic vibrations in a space and set the stage for a potentially transformative experience. I was able to channel Miami and other places I felt the need to connect to, and share aspects of my experience that I didn’t see in Chicago. I have even gone so far as to DJ during a performance, singing over the tracks in my first incarnation of Glitter Beach. I think my DJ and artistic practices feed off of each other because DJing is a performance of its own, and when I DJ I definitely bring drama through my dress, glitter, and other visual aspects of my practice. I am able to achieve drama and narrative through manipulation of the sounds, and I immediately see the effects on the dance floor. I live for being able to offer moments of joy, release, and other deep emotions to my audiences. 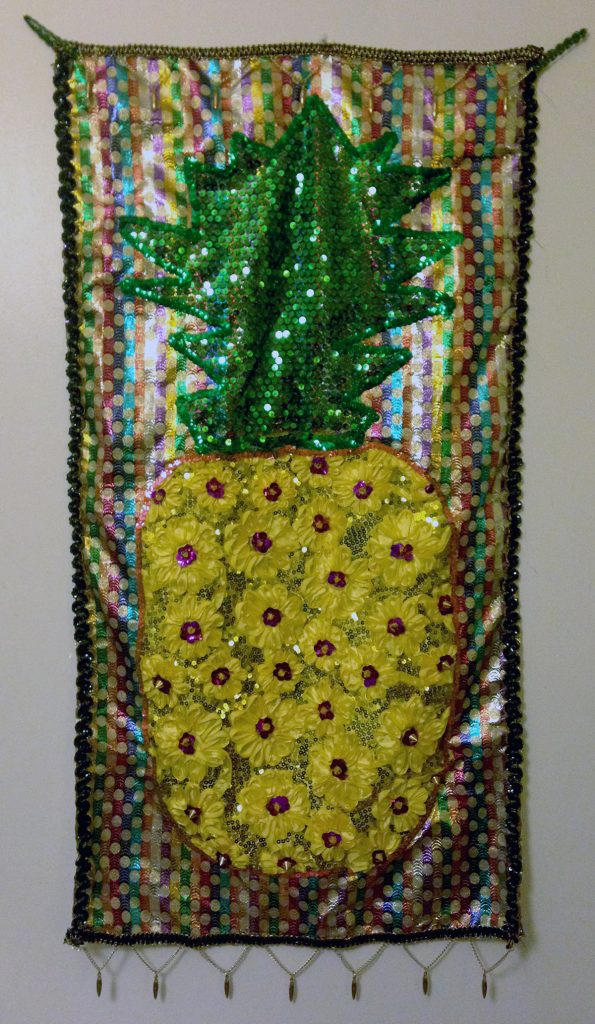 AH: How do you keep yourself moving forward in your practice? How do you create prompts or new projects for yourself? What other projects, performance, and events are you currently working on?

JCG: Being invited to perform and show work is a huge part of how I stay moving forward, as well as applying to residencies and other opportunities. In other cases, research inspires me: a thought or image pops into my head and I pursue the investigation. My main projects are TRQPITECA, a nightlife and art event that features artists working with queer and tropical aesthetics, and my own art practice. After ¿Qué Pasa, USA?, I will be spending time in Miami creating sequin-embroidered pieces, and continuing my study of folkloric music and dance. I definitely hope to share my studies in the future!