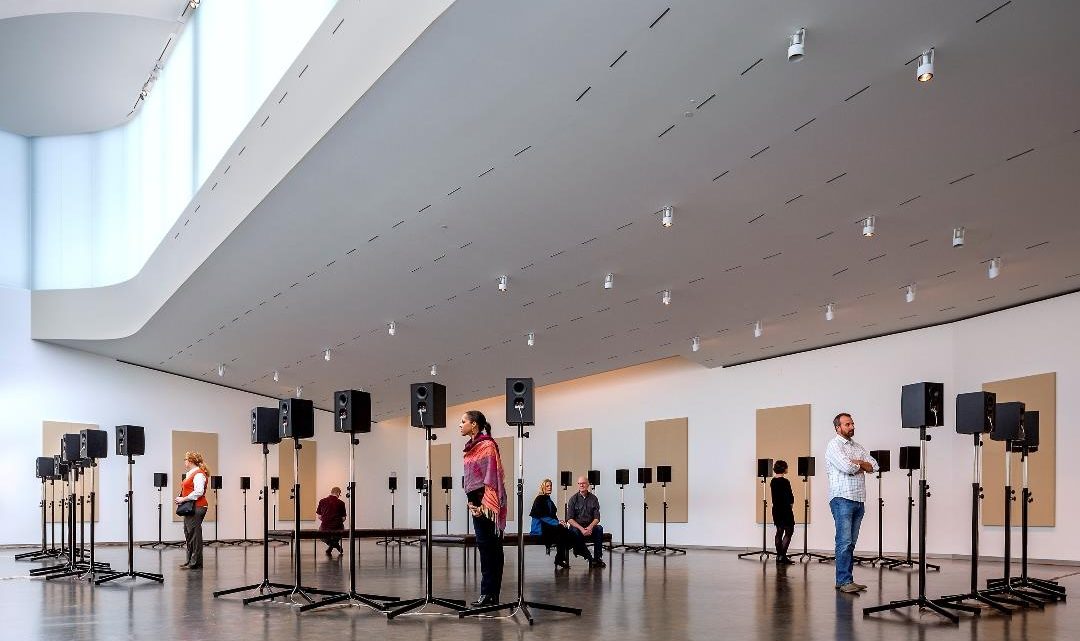 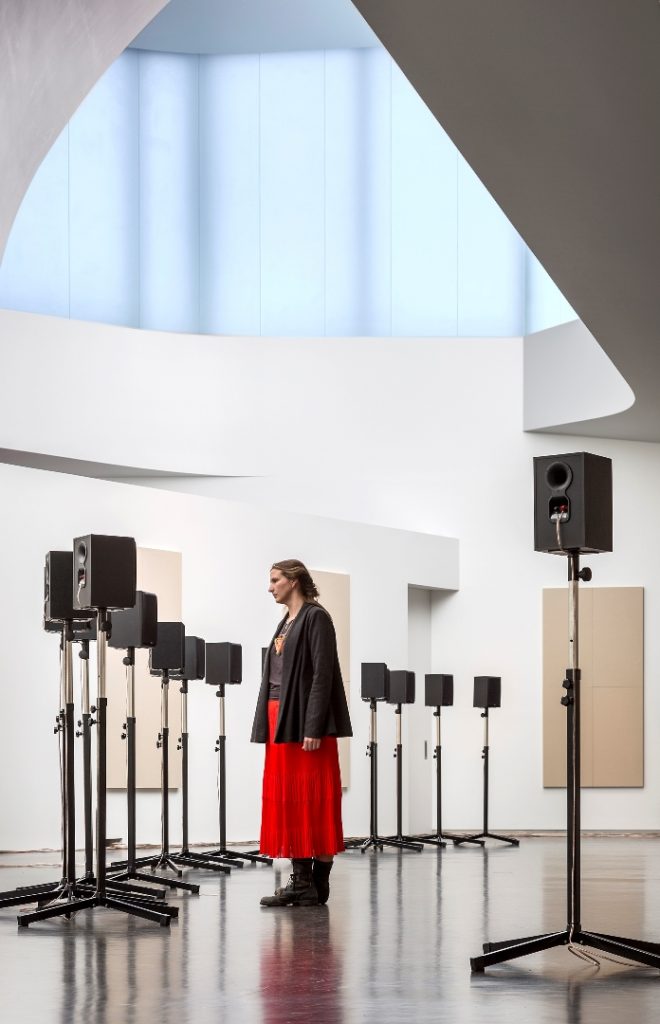 Walking through the Nelson-Atkin’s contemporary wing, you could hear the gently building reverberation of Janet Cardiff’s 40-Part Motet. This sound piece and Multitude, Solitude: Photographs of Dave Heath were advertised as a joint exhibition, but the synergy of both shows became a happy accident. 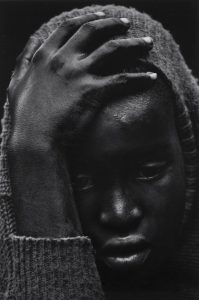 Motet is the stronger of the two, creating a joyful sound experience which brightened Heath’s somber portraiture. His Multitude, Solitude are a collection of mostly black and white photographs from 1931-2016, that dealt with themes of human loneliness, “loss, uncertainty, pain, love and hope.” While Heath’s work awoke human despair, leaving me raw, Cardiff’s work functioned as a salve, restoring hope that even in this broken, violent world, we are still deeply interconnected.

The arrangement of both shows had Heath’s photography exhibition first. If one wanted to bolt straight to Cardiff’s sound piece, as I did, you still needed to pass by his work first which sets up an emotional tone for the viewer. Multitude, Solitude included photographs projected on the wall and torn out pages from a book. Framed portraits, also too small, hung wall to wall, and digital flip books of Heath’s work were presented at center.

Undeniably beautiful, Heath’s street photography captures the fleeting transition between emotions that can occur in public, but which most rarely witness; capturing a secret smile, a glimpse of joy or a moment of loneliness.

However, the weakest aspect of this show was its set up. Torn-out book pages were framed in such a way they cut off portions of several images and the digital archive of Heath’s photography looked like an afterthought. The curator crowded the room with similar imagery when strong editing could have made the very same points with more elegance. This abundance of repetition made it difficult to decipher the overall strength of his work, and was more likely a disservice to his keen photographic eye. Selecting a few of Heath’s strongest works from each decade would have been a simpler approach. Although it is unclear whether or not the two exhibitions were meant to be viewed in tandem, giving more consideration to an intended interaction between Heath and Cardiff’s work would have elevated the creative synergy from both artists. 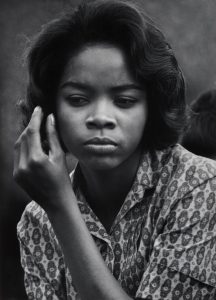 Image from Heath’s Multitude, Solitude. Image courtesy of the Nelson-Atkins Museum of Art.

The audience become voyeurs with Multitude, Solitude, witnessing archived loneliness in the faces of passers-by. With each wrinkled brow or teary stare, we get a glimpse of humanity’s  daily suffering, how one can feel isolated in a crowd, or even the task of getting through the day. These images tear into that part of our hearts where walls are built, the sensitive core that makes us turn off the news or avoid eye contact. Photography gets painfully close to the truth,  illuminating how frequently we gloss over moments of pain with desperate optimism.

Outside the 40 Part Motet, a wall of note-cards provided museum-goers an opportunity to record their thoughts right after any epiphanous moment. Overarching themes of connectivity and spirituality came through, despite the variety of backgrounds and beliefs. Though I am skeptical Nelson curators went into enough depth examining the conceptual interaction between the two exhibits, these notecard reflections epitomized the Multitude, Solitude of Heath’s work. “Motet” transcends human understanding of this world, of art, of music, even of religion. With Heath’s work, one begins to think one understands what it means to be human, and that much of the time it can be unpleasant. Cardiff’s work, on the other hand, takes us out of our deep-seated cynicism and competitive mentality without washing away our individuality or community. 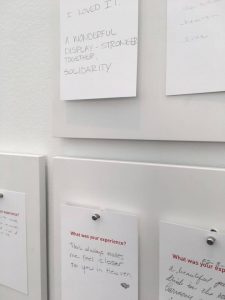 My best friend and I entered the Motet space together, then quickly split up, allowing us to have separate experiences not influenced by our friendship. We walked in near the end of the recording, but it played on a loop every fourteen minutes or so. 40-part Motet is a collection of inward-facing speakers arranged in an oval, where visitors can sit on benches, stand, or walk around the interior. The speakers are arranged in eight groupings, for the eight different choirs recorded. Every speaker has its own a cappella voice from England’s Salisbury Cathedral Choir, singing in Latin. Surrounded by these speakers, the audience became a silent hive. It was refreshing in that the reverence for the music went beyond modern museum etiquette. No one had their phones out for photography or recording, an anomaly. It was as if they were in a place of worship. Some stood, meditating before one speaker, some walked methodically in thought around the room, some sat on benches, some even sat cross legged on the carpet, with closed eyes. I couldn’t find words to describe this energy yet, but it had something to do with peace, with connectivity, and it was transforming the space.

The combination of 40 voices struck me immediately, giving me goosebumps as the song swelled from a soft hum to a booming wave of vibration and sound. I stood at center for a moment, already tearing up, and closed my eyes to feel the energy of the room. Due to its circular arrangement, Cardiff’s work enveloped the audience, as if we had entered inside the music itself.

It was deeply important that I absorb every vibration. Forty individual voices with unique inflections blended into sharp, clear sopranos, deep basses and baritones, and sweet tenors. I imagined the speakers were people, not technology and they were singing directly to both me and a higher power. I became the most emotional when the intensity increased and the harmonies hit full blast. I forgot where I was and who I was with, the beauty of the work stirred a sad, aching joy of happy tears. My fellow listeners and I became vulnerable, perhaps experiencing contemporary art of this genre for the first time. Looking around the room, people of all ages and ethnicities were present, many with the same misty-eyes I had. Just as the multitude of voices combined into one voice, never losing the variety of tones and voice types, we became one, never losing what made us uniquely ourselves. 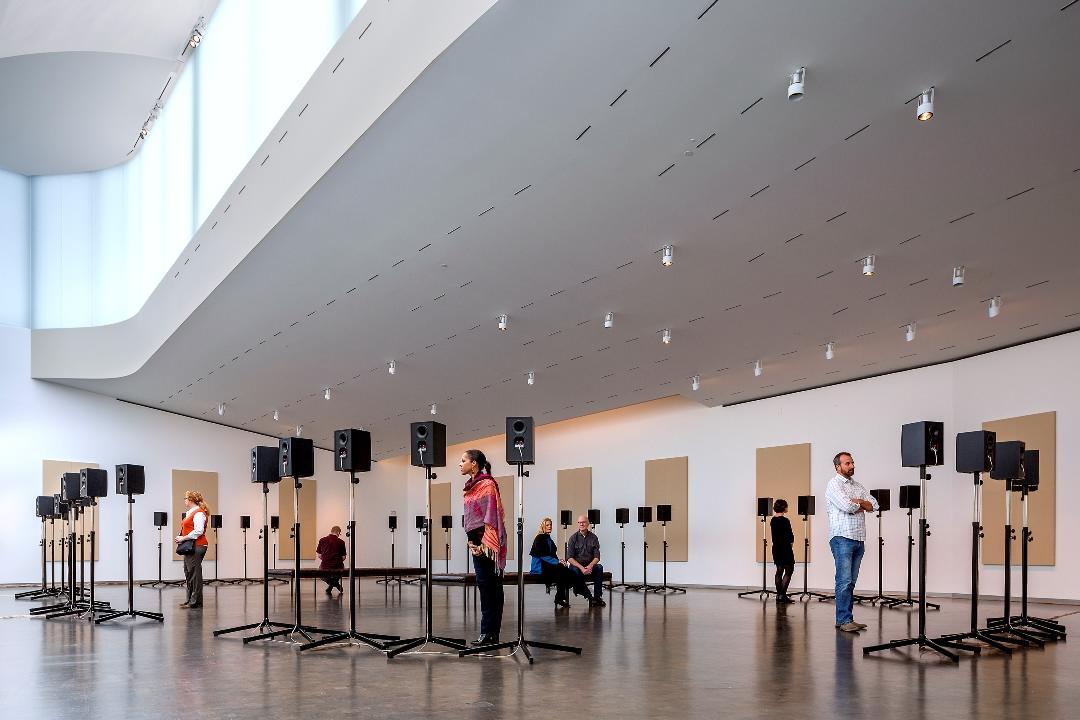 I recognized the potential for universality, especially after reading audience reactions, which ranged from “God spoke to everyone here,” to “Namaste,” to a nearly blank card with a tiny word, “Wow.,” written at the bottom corner. Performed in a language few know, the audience relied solely on emotional energy to comprehend the song.

I spotted one girl, likely near my own age, sitting cross legged on the floor, eyes closed and weeping. I sensed she was deeply spiritual like I am. But I let it go, understanding this was one of those fleeting moments similar to Heath’s work in the next room.

At the intermission, the recorded singers began speaking to one another, a different sort of bubbling chorus. We could hear a young choir member saying she had to use the bathroom. The other members discussed the weather, coughed, laughed, and warmed up their voices. It was these sort of breaks that changed the tone of the piece and the audience was pleasantly startled by this sudden inclusion of humanity. It also broke the tension in our atmosphere too;  people began speaking, our own voices united with the chorus. Based on Cardiff’s interviews, I don’t know that she intended this inclusion as an opportunity for the audience to relax, though it functions as such. Cardiff wanted to highlight the way run-of-the-mill human speaking voices can metamorphose into an angelic choir in a single breath.

During my research it became apparent how much this musical sculpture could transform its surroundings based on the work displayed. In The Art Gallery of Ontario, Motet was situated near a collection of spotlit abstract sculptures. At the Nelson, Cardiff’s piece stood alone visually, but the sound carried into different exhibits. Placing Motet on its own prevented visual distraction, but sound can rarely be contained between dividing walls. While other works could not disrupt Motet, Motet radiated out into surrounding galleries. I’m not certain Heath’s Multitude, Solitude would stay in memory when Motet washed over the room, but when I forced myself to see the photo exhibit, I couldn’t get the music out of my mind.

Though Cardiff’s Motet had traveled across many continents, it remained a remarkably universal, immersive experience. Reactions to the work touched on it’s spiritual nature, calling it “a choir of angels in heaven” or “a connection with God.” Other notes commented on how it united the room, even the world, reminding us how our different voices come together as one humanity. Most artists struggle to communicate ideas or emotions visually or through sound; Cardiff is a master of both. What makes 40-Part Motet so revolutionary is that it doesn’t require us to decipher by listening or by seeing, but rather requires us only to feel.  Multitude, Solitude also made us feel the  power in its honesty and leave us to ask, what is the solution to suffering?  Motet was cathartic, fourteen minutes of healing I wished could be a daily practice. Works like these offer a way to recover enough to find our own answers.

Janet Cardiff’s 40-Part Motet and Multitude, Solitude: Photographs of Dave Heath were temporary exhibits at the Nelson-Atkins Museum of Art, which ran from November 19, 2016 to March 19th 2017.