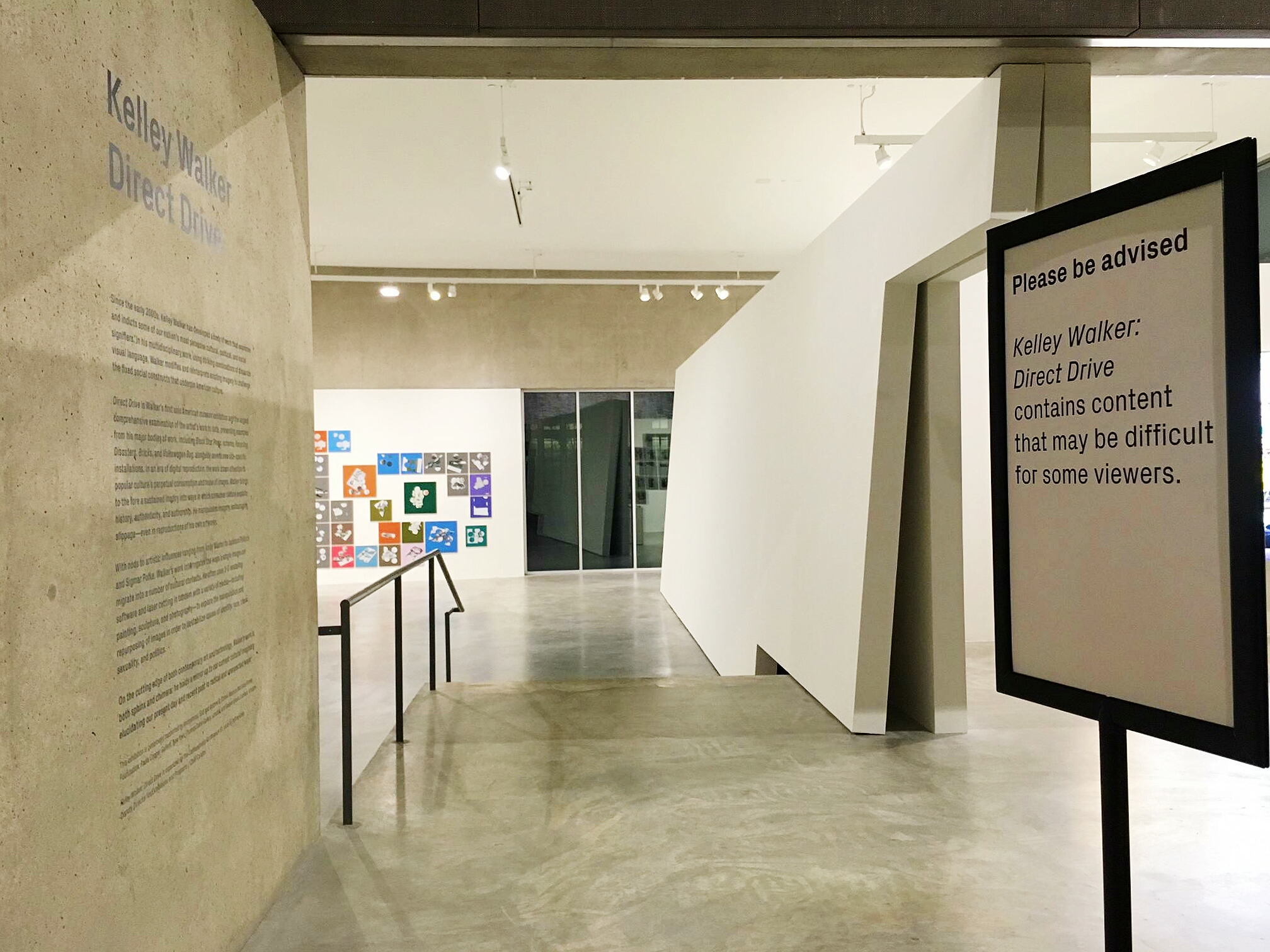 In hindsight, I hoped Direct Drive was discussed and presented in a more organized, thoughtful and intentional manner. This was an opportunity for one of the Midwest’s major contemporary art institutions to take a stand in regards to racism and the current US socio-political climate. As unarmed Black women and men continue to be killed by police, ignorance and white supremacy continues to be fashioned as more palatable language. I think that CAMSTL could be a place of refuge, used as an environment for honest dialogue, where the work on the inside can respond poignantly to the chaos outside the museum.

Instead, Direct Drive exuded ignorance aimed specifically towards historical acts of domestic terrorism, as well as the ongoing and careless use of complicated iconography, which cited these direct examples of colonialist appropriation. Within this exhibition there were several different images of Black celebrities and entertainers, alongside images of racial injustice events from the Civil Rights Movement of the 1960’s.  All of them had been covered in whitening toothpaste and/or chocolate. This is a blatant act of whitewashing, an overt fetishization of Blackness. The final images were blurred in such a way that gesture in the content perpetuates the same disenfranchised positions Black people are often seen through mainstream media. There must be a better way to engage a conversation where the transformation of materials, images, and content can work out the issues within the desired direction of the works. 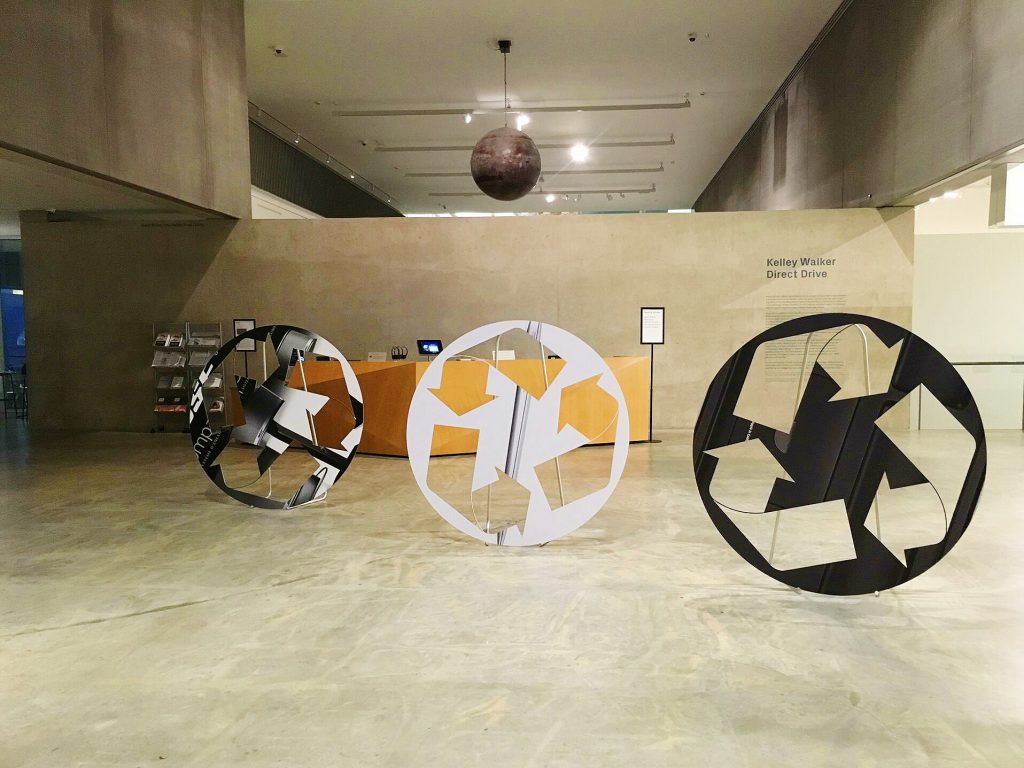 In the museum’s atrium gallery I first approached large scale sculptures that referenced recycling symbols cut out of sheets of metal, and a massive disco ball made of chocolate hanging from the ceiling, which, in and of itself, was disturbing. Also in the front space, a wall was removed to put one of Walker’s ‘premiere’ works; a huge light box illuminating one of Walker’s first toothpaste-smeared images. In the next gallery I encountered a massively oversized print of King, a gentleman’s magazine, on the wall across Civil Rights images smeared with chocolate sauce. What prompts the juxtaposition of chocolate and whitening toothpaste so blatantly? Presenting images of Black women covered with whitening paste did not only comment on the whitening of black culture; it also cites a lack of transformation. From there I was finished looking at the rest of the works on view.

The next day, I attended the artist lecture at the museum. In the audience were many artists, writers, curators, and patrons. Also in attendance were Robert Hobbs, professor of Art History at Virginia Commonwealth University and Jean Crutchfield, a curator from New York City. Both support and write extensively about Walker’s work. The talk Walker gave was void of any content. He approached every image, even those images of Black bodies, as if the figures were not human, but merely objects that he could erase, scratch, or delete without recognizing that they were actual people. It was no different than the way in which the media portrays the death of Black lives, painting them as criminals and removing their humanity.

His presentation was formatted on an anti-intellectual platform, lacking factual research to support his claims; mirroring the GOP’s aggressive tactics of propaganda. Walker uses his biography as a point of departure for his work. This has wrongly given him permission to not bear responsibility for the work I see as riddled with insufficient content direction. It is being considered and critiqued from the wrong perspective. For example, Walker spoke about growing up in Columbus, Georgia, explaining that he participated in desegregation programs growing up, which reinforces a problematic insensitivity towards race. To say this artist was born and raised in the South does not give him a justifiable platform for putting chocolate sauce on images of a white man torturing a Black man with a police dog. It is academically and creatively deaf, dumb and blind to the real world. 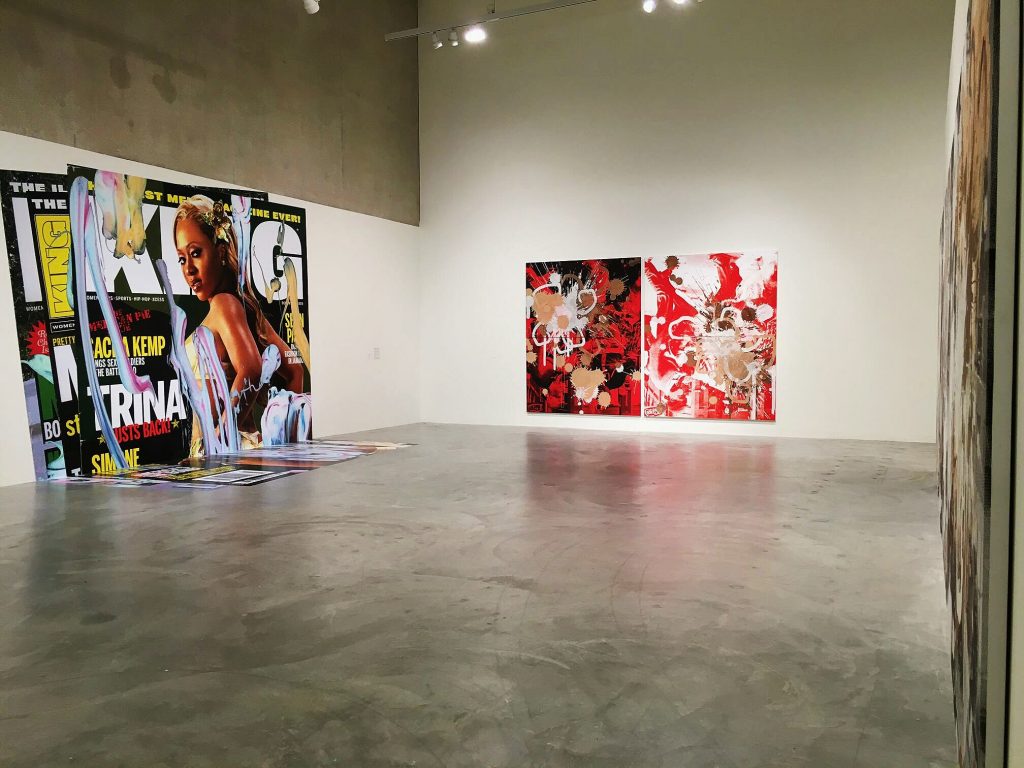 Installation image of Shema and Blackstar Press by Kelley Walker. This work existed in the gallery that was closed off by the wall. Photo by Kahlil Irving

After his lecture, Walker opened the floor for questions, which included interest in understanding his approach to construction, content, and decision making within the works. As the Q&A progressed, he began to get irritated and was becoming hostile towards the audience. I asked, “You say that your work deals with CMYK printing processes and other technological advances, why do you focus intensely on the use of the Black celebrities, Black entertainers, and the racial injustice images?” He responded, “There is only one work where there is not both a black and white body present, so please rethink your question for me.” I was outraged. This attitude continued when he told another audience member “I am tired of repeating myself to you people.” Museum administration defended the artist’s actions and the lack of accountability Walker was taking for his work. 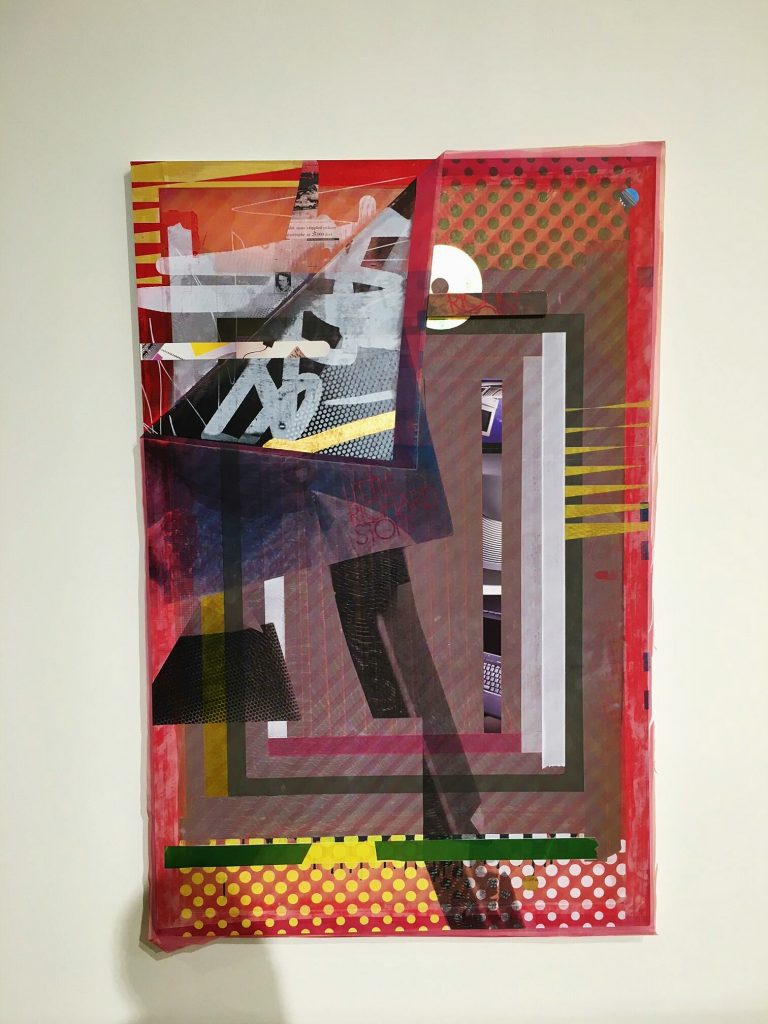 Many audience members who support Kelly Walker shouted; ‘Did you read the Glenn Ligon essay about Walker’s work (Kelley Walker’s Negro Problem)?’ As if this is to legitimize what he was doing, this article clearly stated if this work was made any closer to the 1960’s it could be problematic. But I ask, ‘ Is it not problematic today?’  In regards to the killing of Michael Brown in 2014, which occurred just a few miles away from this very museum, the work should not have been curated here, or anywhere. Not supporting this work is actively taking a stance against racism and white supremacy. Kat Reynolds and myself were aggressively approached by critics and art historians in the audience who defended the artist, and then voiced several racist remarks, including, to Ms. Reynolds, “Since they were not slaves, they do not understand how it feels.”

The exhibition and subsequent artist talk led a call to boycott the museum by St. Louis-based artist Damon Davis and may have inspired the cancellation of Art 314, CAMSTL’s contemporary art auction, to support local artists and connect them with collectors. I spoke on a panel apart of Critical Mass Conversations —which was a collaborative event that which was held at the museum. The event went through many changes before it was confirmed for September 22nd 2017. The panel also consisted of Professor Rebecca Wanzo, MK Stallings, Lyndon Barrois Jr., Vanity Gee, Kat Reynolds, Danielle McCoy, and Kevin McCoy.

When it was my turn to speak, I first shared a personal narrative then addressed the curator — Uslip — directly. I attempted to share the pain I felt in response towards his arrogant attitude about Walker’s work and the museum patrons inability to understand the inherent content of this exhibition. I used a quote from his own NPR statement wherein he said Kelly Walker is the artist grappling with race, among other issues. I used his words to explain what was wrong with this remark. Uslip was one of my seminar professors at Washington University in St. Louis and I felt his interests then were sincere. He wanted his students to build knowledge of critical assessment, but when it came to issues dealing with gender, class, or race, his remarks were murky. I felt that his intentions were to make a change, but to curate Direct Drive his intentions were not present. It was personally painful to listen to him idealize Walker’s work after listening to his lectures in class about other contemporary artists challenging issues in life with images and materials. It felt as if Uslip absented himself from the same critical eye he used when addressing the works of his students and other artists.

In response to the panel discussion and the constant protest, CAMSTL decided to erect a gallery wall, adding signage that read, “This Gallery contains content that may be difficult for some viewers”. In this viewing space were pieces Schema, White Michael Jackson, and Black Star Press. Taking this approach of not addressing the racism, while simultaneously, not accounting for its actions, disrespecting the support they have for other artists they exhibit, and the community they serve. 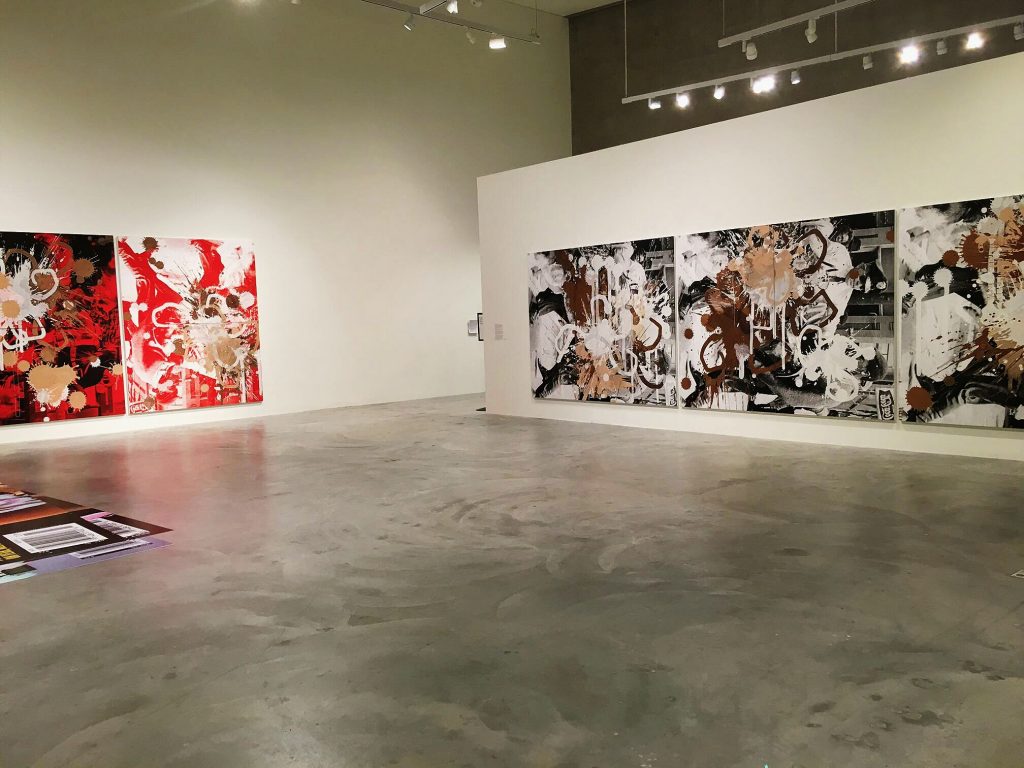 In the art world and in St. Louis many do not want to see the racism in the system. Similarly, other canonized art institutions do not want to acknowledge that racism is present within the social and cultural history generally accepted  as fact. Rather than acknowledging the inherently racist system and societal structure, the leaders of these institutions show, in their actions and statements, that the problem lies not within the history we are forced to follow, but with their audience, local artists, and other non-costal-based arts supporters. Such thoughts dangerously assume people from the midwest are unintelligent and ill-informed on the genius within art brought to St. Louis by major art benefactors. As an artist, when addressing and analyzing this work it is not about “liking” or “disliking” it, it is about the conceptual and visual complexities that are presented within the works. Like many, I too have an art historical background. So visual analysis is just as important as conceptual analysis. It is not worth it to exhibit “controversial” works just to spark conversations. We need to address racism head on, and not support it institutionally.

The Contemporary Art Museum St. Louis has supported its local artists by providing a curatorial program, known as the Front Room. “Conceived as a smaller, experimental space that stands in contrast to the museum’s more formal galleries… the (ongoing) series gives critical exposure to younger artists from out of town that we wouldn’t otherwise get the chance to see.” One resolution would be continuing the fluidity and dynamism that will make the context of St.Louis important on a local, national, and international platform. A continuous program for guest curators and artists that strengthen patterns of growth and diversity. This proposition extends not only to St. Louis, but to all major arts institutions nationally. Be the change in politics people are fighting for on the streets inside and outside the institution. 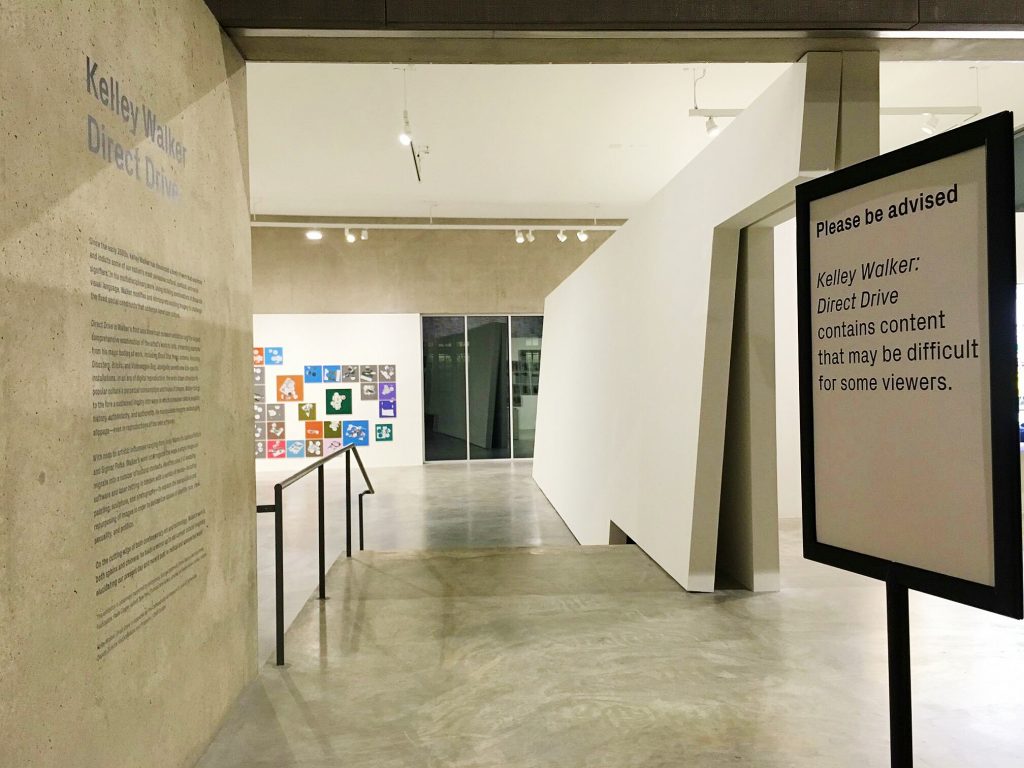 As a community, it is imperative to analyze the status quo, attend to solutions that call specific issues to the forefront. Racism and imperialism are strong within the museum system and as a group we can make a difference. The arts institution, although as a way to preserve a legacy, also has a responsibility to ensure factual, tactful, and systematic changes are met. Presenting images of Black people covered with whitening paste illuminates a lack of self-awareness. How do we complicate images and not perpetuate racism? Or white men in cultural authority being able to do what they want without question? Eurocentrism is not the only way to analyze art and culture. Starting with a widening of that dynamic is a start.