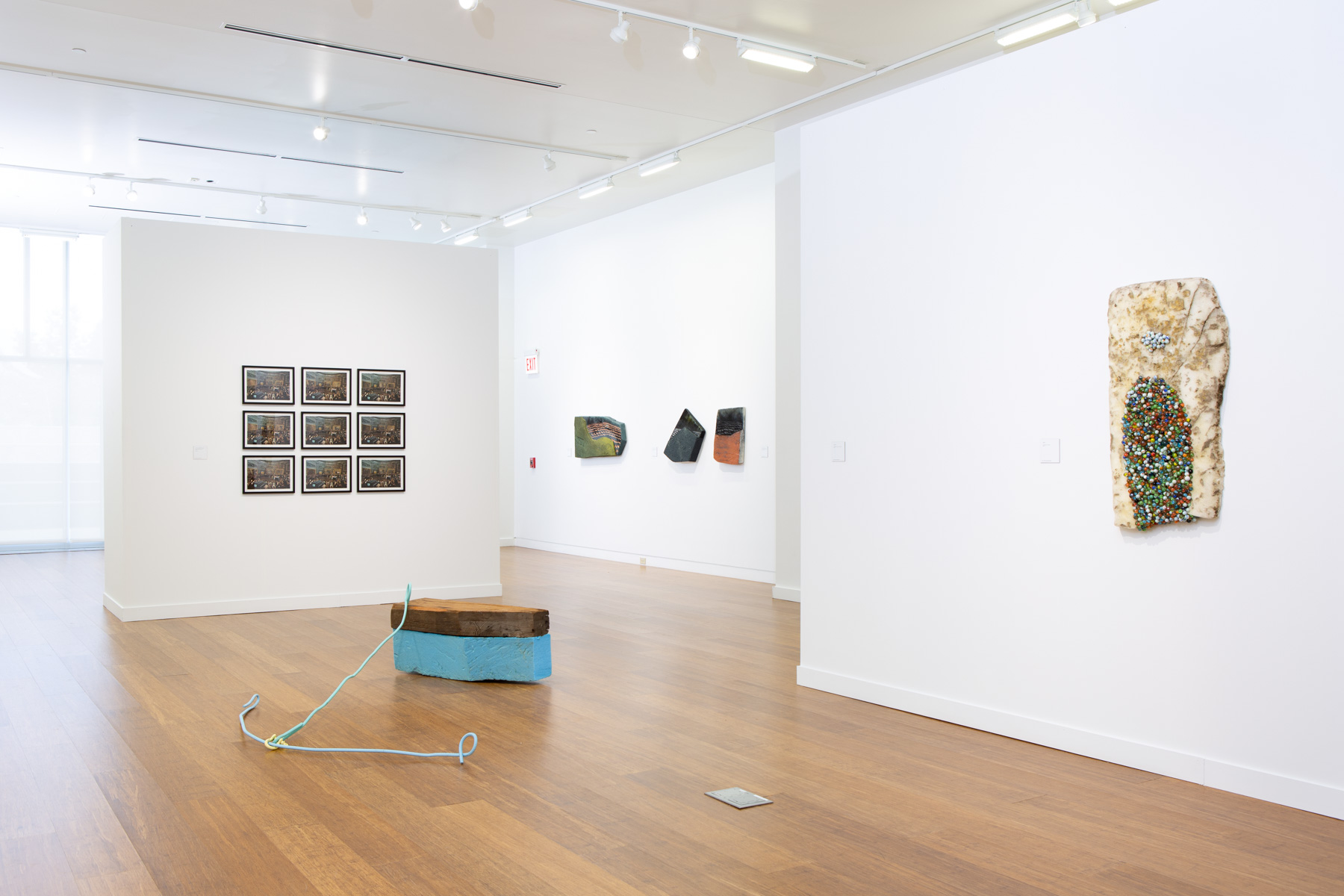 May God Thy Gold Refine

Garry Noland makes himself known as a jolly scrimshander of trash, incising psychedelic patterns, maps, and portals into polystyrene, pieces of cardboard, and stacks of old magazines. He weaves textiles and gilts objects gold with polyetheyne tape, creates mosaics with shining tesserae marbles, and confidently posits that monuments can be dredged from polluted urban lakes. He wears a vintage mohair cardigan and is quick with a bad/dad joke. He has a rigorous and sacred studio practice, to which he shows up daily and works diligently, letting the materials he sources from dumpsters, sidewalks, and his studio floor guide his process with an almost religious faith in their ability to reveal underlying truths.

Noland’s ongoing America the Beautiful series (2017-present) is a group of collages titled after and featuring a poster series of bucolic American landscapes that were reproduced by the U.S. Department of Agriculture in the 1960s. Noland reworks the images with graphic black letters appropriated from a vintage National Geographic international travel advertisement that has been rearranged from “ATTENTION ESCAPISTS!!!” to read “ATTENTION FASCISTS.” The collaged block letters loom over hills and mountains where the viewer’s perspective is sometimes aerial and sometimes on the ground. In some of the collages there are cattle grazing in a field; in some a figure observes a pastoral scene, and in some a rural highway winds through the landscape. Each of the scenes we encounter are lush and seemingly pristine—apart from the ominous typographic call for attention.

These works prominently exploit midcentury print and advertising aesthetics, but have been created and presented during a time when the American population is politically divided and reeling from a reality television star entering the office of the U.S. Presidency using the campaign slogan “Make America Great Again.” This imperative was overwhelmingly effective in mobilizing a voter base by referencing the nostalgia of a bygone America and an implied decline that has been attributed to liberal ideals. The images of American spaces that Noland deploys in these collages bring into focus the prominent rhetoric of a political campaign—one that romanticizes what America has been and the ideals embodied by the nation. Noland notes in conversation that the good old days weren’t good for everybody 1 and aims to use the emblazoned letters and his appropriated title for the series to place the nostalgic image into a contemporary context.

The juxtaposition created by applying sans serif, all-caps font to a familiar image is formally effective. The aesthetic of the stark black lettering paired with the slightly faded poster is a visually compelling design on its own, but it also references the conventions of both historical propaganda and online image macro meme culture. Internet memes are predicated on a visual strategy of hijacking the original meaning of a familiar image to call attention to the way information is processed and spreads in contemporary online culture—rapidly and often relying on ironic ambiguity and/or sensationalist tactics. By collaging the word “fascist” into Midwestern landscapes in a manner that mimics such varied reference points as Internet memes, sensationalist propaganda, and even the famous Hollywood sign, Noland implores viewers to consider the landscape in a new way—to ask who is being summoned by this call for attention, from where, and to what end?

The first Fascist movement is attributed to the political party led by Benito Mussolini from 1922-1943 in Italy during the lead up to and during the second World War. Mussolini took power during the March on Rome in October 1922, endorsing a platform that was expansionist, believed in Italian exceptionalism, and looked to create a new Roman empire. The doctrine of Fascism outlined in Mussolini’s manifesto relies on extreme nationalism, wherein the government must exert imperial power over, not only territory and economics, but also spirituality and ethics. Vehemently opposing the individual freedoms and progressive ideals of classical liberalism, it targets civil liberties, workers’ rights, and free thought as enemies of the State.

This authoritative vision demands conformity to a national identity at the expense of individual expression and characterizes collaboration with other nations as weak, pacifism as cowardly, and war as a noble and unifying cause. 2 Mussolini’s regime used propaganda, theatrical speeches, and dramatic pageantry (the 20th century’s version of reality television and sensationalist cable news programming) to inspire uncritical faith in these tenets.

After the Allied victory that defeated Nazism and Fascism in 1944, George Orwell (author of the dystopian novel 1984) wrote that the word fascism is almost entirely meaningless. 3 Orwell recognized that post-war American culture made a habit of using “fascist” loosely to describe anything that is unfairly or unnecessarily strict. In the aftermath of the 2016 U.S. Presidential election, Noland noticed a similar frequency and casualness in how the word was being brandished in the media regarding President Trump—a practice that has been examined critically in notable publications such as The Washington Post, The Atlantic, The Guardian.

This observation led Noland to look toward a familiar source material in his art practice: National Geographic magazine. The widely distributed publication is easily recognized by a gold rectangular logo that illustrates its own larger structure, was first published on September 22, 1888, and has been ubiquitous in many homes and libraries since. Downplaying American politics, the magazine has largely served affluent or upper-middle class, white readers by delivering articles about science, history, and the cultures of distant corners of the world, focusing on award-winning photojournalism that often captures scenic panoramas of breathtaking landscapes. Critics of the magazine—Noland among them—claim that while the magazine may further scientific inquiry and research, it also exoticizes non-Western cultures and documents American Imperialism. This notion is exacerbated by the likelihood that many “readers” look at National Geographic only for the photographs, not reading its content—a humorous inversion of the dubious claim that so many Playboy readers make—and demonstrates the kind of everyday, passive viewing and media consumption that Noland’s work aims to implicate.

In this exhibition, Noland presents new bodies of work that engage National Geographic magazines as both source and physical material to examine language and media representation. Like his America the Beautiful series, two other series of works employ print media collage and décollage techniques to suggest characteristics of screen-based media. Noland activates several copies of the entire April 1972 issue of the magazine for If your six year old saw something like this would he know how to phone for help? (1995-present), cutting into the body of each magazine to create a television screen-like window depicting a group of sheep(le?) to whom we can infer that this question is being directed. And the most recent work, Scene from JFK’s Funeral (2018), is a suite of seemingly identical images published in the March 1964 issue that depict the funeral proceedings for President John F. Kennedy. Upon closer inspection, slight differences appear: cropped scenes taken from other photographs within the same article have been superimposed onto framed artworks in the existing scene. These alternative viewpoints of the same event do not share the vantage point of the viewer or of the camera depicted in the original photograph, conjuring the aesthetics of surveillance. Noland’s gesture suggests that critical suspicion on the part of the spectator has always been a necessary tool to confront the implicit biases embedded in our governments, in our media, and in ourselves.

Noland is known predominantly as an artist who works with textural rather than textual relationships, despite his long history of using both language and National Geographic magazine to critique right-wing political aims. In the past, these works have taken sculptural rather than two-dimensional or relief form, and referenced Morse code rather than computer or television screen culture, but still departed from his more familiar formal compositions. In presenting Noland’s collage and text-based works alongside his abstract representations, this exhibition allows a complex dialogue to emerge, and an understanding of the artist’s inquiry becomes richer. One can see that each mode of studio production is in keeping with his larger project—a practice predicated on manipulating commonplace materials to explore varied interfaces and refine an understanding of form.

In sourcing found and reclaimed materials from the humblest sources, Noland positions his work within the tradition of Arte Povera, an avant-garde movement that emerged in the wake of the Fascist-friendly Futurist movement. Italian artists in the 1960s took a radical stance to the values of established institutions of government and industry, using commonplace objects and found materials that energetically evoked locality, physicality, and materiality. Their use of unconventional materials aimed to disrupt the values of an increasingly commercialized contemporary gallery system and align art and everyday life more congruently. These artworks presented absurd and humorous juxtapositions, often highlighting distinctions between new/old, highly processed/pre-industrial, purposeful/accidental, and play/toil. In his manifesto on Arte Povera, Germano Celant positioned the movement as a critique of capitalism and consumerism, questioning the “use value” of art. 4 Celant linked Arte Povera’s aims to Italy’s political background and art’s potential and failure to respond successfully to the relevant social issues of its time in both this founding manifesto and his call for the group’s dispersal in 1971.

In his own artist statement, Garry Noland proffers, “The oft-quoted role of the free press is to ‘afflict the comfortable and comfort the afflicted.’ Art’s first-cousin role, then, is to find the mundane in the grand and the grand in the mundane.” 5 Across his varied artistic practice, Noland cites the abutments between boundaries—whether formal or conceptual, historical or contemporary, playful or serious, grand or mundane—as a reflection of human interaction with art and with each other. The phrase “living in the moment” is as banal and easily dismissed as Noland’s raw materials, and it functions to describe his practice and the resulting presence of the objects and images he creates. With borders and frames that are often fugitive and contingent properties that literally and figuratively lean into one another, these works are charismatic instigators that implore viewers to engage actively with the present physical, social, political, and emotional spaces we inhabit. For it is we, the consumers of visual culture, who are being summoned by Noland’s call for attention, in order to examine the role of art and images in how we think about our everyday lives.

This essay was commissioned by Cleve Carney Gallery and is published in conjunction with the exhibition, Base Materials, at DuPage College. Find the online catalogue here.