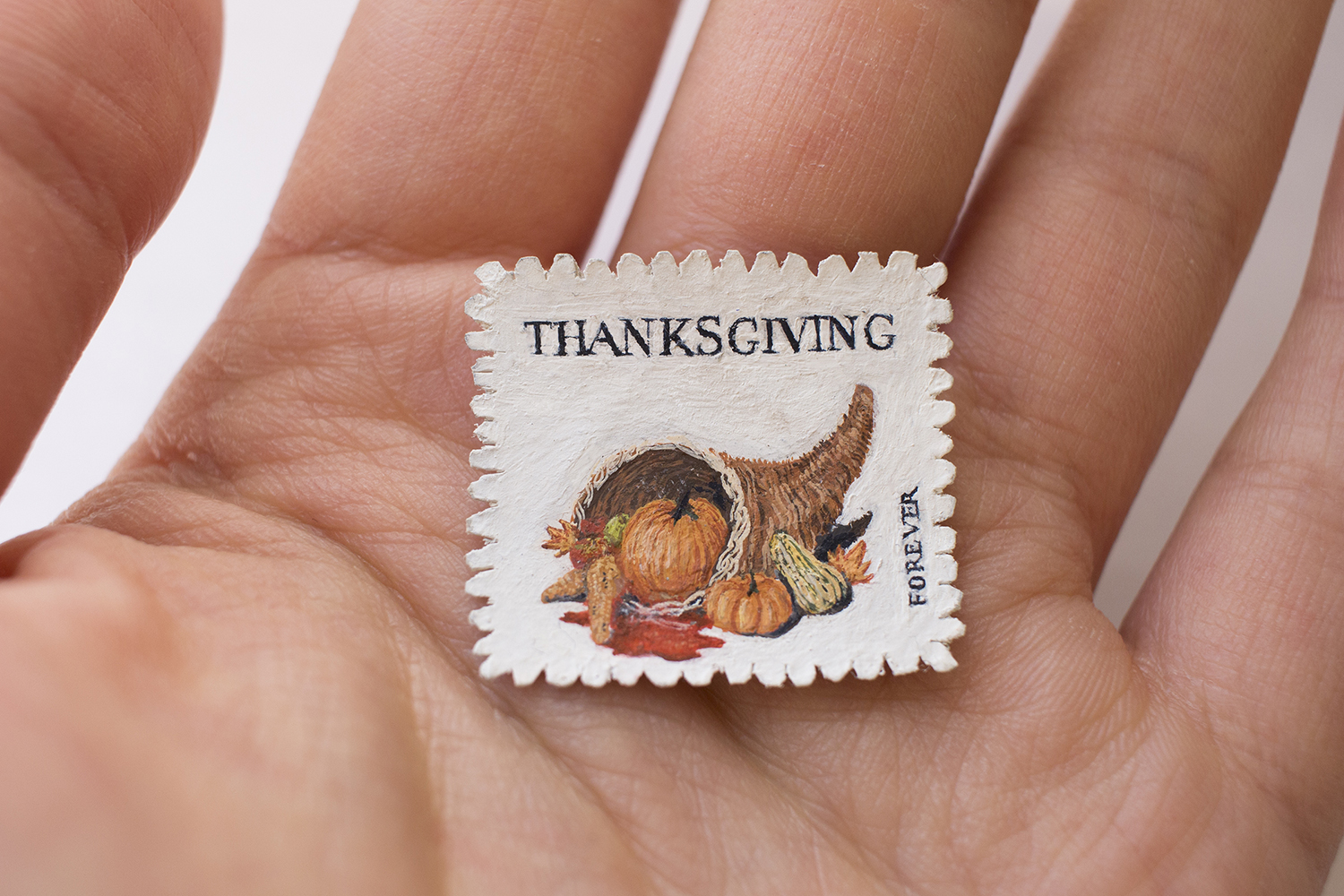 Issac Logsdon speaks with New York-based artist Maya Grace Misra about highlighting the marginalization and exploitation of People of Color in American History in her new body of work.

Maya Grace Misra’s work rejects the idea of a singular American experience, offering a rich and pluralistic alternative. Using familiar patriotic formats, such as flags and postage stamps, Misra gives excluded voices recognition. She asks viewers consider which current and historical events contribute to forming our collective history. For ¿Que Pasa, USA? Misra is showing work from two current bodies of work. In her Revised U.S. Flag series, she invites U.S. immigrants to redesign the country’s flag opening a conversation about how many forms of patriotism, such as the design of a flag, remain stagnant while the country is changing. In her Forever series, she uses postage stamps to insert overlooked histories onto a widely accepted format of patriotism. Misra earned her BFA from New York University in 2014 and is currently based in New York City.

ISSAC LOGSDON: In this exhibition, you have two very different approaches to making—painting postage stamps and constructing flags. What is the relationship between each series’ content and the processes and materials for each?

MAYA GRACE MISRA: Research is a very important aspect of my art practice. There’s something to be said for artistic gestures that not only make the viewer feel something but also to provide crucial information that one can ruminate over. As I read about and research issues on my mind, I make connections between these issues and the everyday objects that inherently assert patriotism. For the Forever series, I was reading A People’s History of the United States by Howard Zinn, and couldn’t get over the brokenness of our system from its very inception. I agonized over the seemingly simple task of which postage stamps to buy for mailing rent checks and letters to family and I couldn’t help but question stamps such as the one celebrating Nevada statehood, which features an image of the state’s beautiful landscape. Would purchasing these stamps affirm the exploitation involved in the United States acquiring this land?

It all kind of came together at that moment, wherein I realized that I could make the postage stamps that I wanted to see or that I felt could more accurately represent our history. Painting them on a miniature scale was appropriate at the time because I was also trying to learn to paint in the Mughal Indian miniature style, which is a part of my background. While it seems like a somewhat arbitrary decision now, I think painting on such a small-scale keeps me closer to the subject matter than if I were simply designing on a computer. I spend more time with each piece, and I have to work a lot harder to do justice, so to speak, to the subject matter. This small scale forces the viewer to work harder by looking more closely and interpreting every detail. Such details open up a dialogue that is both for and about people who have been historically marginalized and broken down.

Meanwhile, Revised U.S. Flag examines the lives of immigrants who are often expected to assimilate immediately and lose the stories, language, and culture that really make up the larger framework of our nation today. Materially, the stamps and flags alike are very fragile, though I would say this is mostly a consequence of what I’m doing. I didn’t necessarily intend for every item to be so delicate, but the ideas behind the work are in fact about broken systems, broken lives—so the fragility of each item is quite fitting. 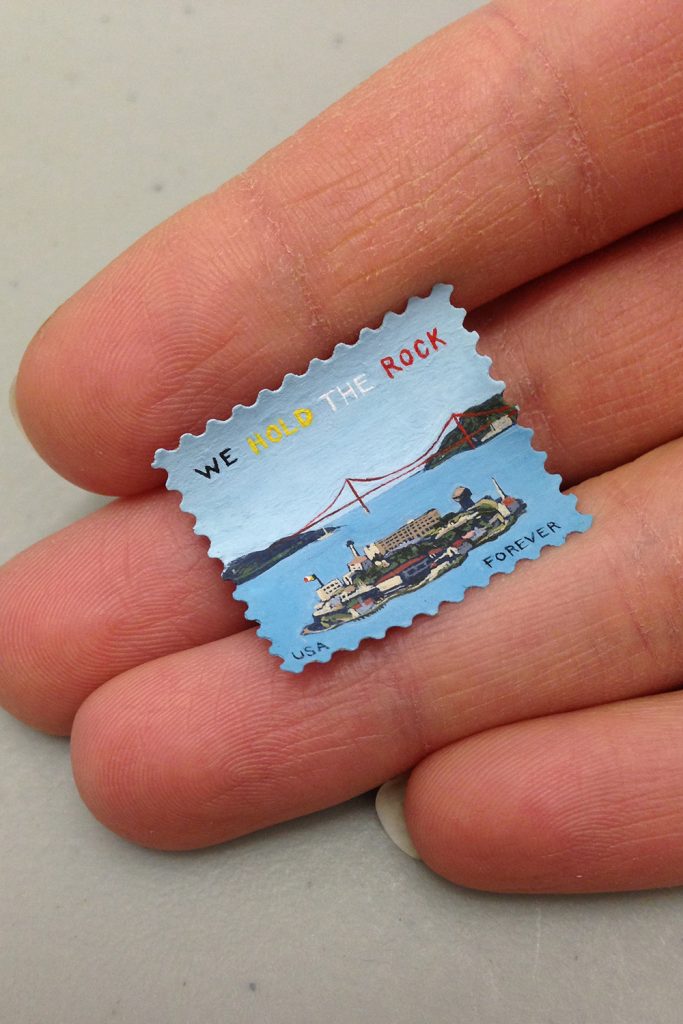 IL: How does borrowing widely distributed and socially accepted formats of patriotism, for example, the flag and the stamp, give you a platform to engage in often ignored histories?

MGM: These forms are important because they engage audiences beyond the reaches of the immediate art world. Most participants in the Revised U.S. Flag project have never set foot in a gallery space. While the flags are obviously being shown in a gallery here, there are many opportunities to showcase them in a setting that can reach a broader scope of people.

I like the idea of using such platforms to change the images that we already see on a daily basis into ones that more adequately represent the diversity of the people and our history, particularly bringing historically marginalized people to the forefront. I almost want to say that we’re caught in a constant state of indoctrination as we view these patriotic images on stamps, currency, flags (visible on cars, construction sites, government buildings, in windows and on clothing) and yet we don’t really think about these images because they saturate our daily lives. But when we change the images themselves, people stop and look more carefully to see that there is something off. We may see a stamp with Andrew Jackson on it, but if we see this glorified image of him along a vague or questionable quote on it, we’re more inclined to seek out more information. [We will] find that things aren’t quite right with the socially accepted narrative provided, nor with the images that have affirmed this narrative through their distribution—on everyday objects like stamps, currency, and flags.

IL: For me, the Forever series is particularly poignant because of the text ‘FOREVER.’ The word seems to solidify current narratives, adding them to a larger historical cannon. Why have you chosen to deal with current and historic events simultaneously in the series?

MGM: While initially, I had planned to simply depict historical events of the past, there was a nagging feeling that I also had to address the things that are still happening around us. Although not yet in textbooks, our current events will eventually be solidified into a historical narrative that cannot be retracted. We can’t think of current events as occurring in a vacuum. They don’t. We have led up to these incidents for years, decades, centuries before. Many events and public figures of the past are ones we thought we understood, that our high school and even college textbooks explained from a single point of view. But if you seek out different sources, you find that the story is usually different when told by minorities. We begin to understand the voices that have been pushed into the cracks by starting with the images and symbols used to suppress them.

Even if I employ the Forever project to discuss the slavery of black people in the 1800s, we already know that this happened and that it’s not okay. At the same time, we may not immediately connect a woman held in slavery in the 1800s and a white father in the present day, hushing his young son for mentioning race. We may not connect a cornucopia soaked in blood and an image of Alcatraz Island held by the American Indian Movement in the 1970s as a protest against the abysmally poor resources granted to Native Americans. Joining past and present demands the viewer to consider the themes more clearly. Here is a history of exploitation and marginalization, and we’re not done with it just because the law says we are. It happened, it’s happening, and it will continue to happen as long as we let it—forever. 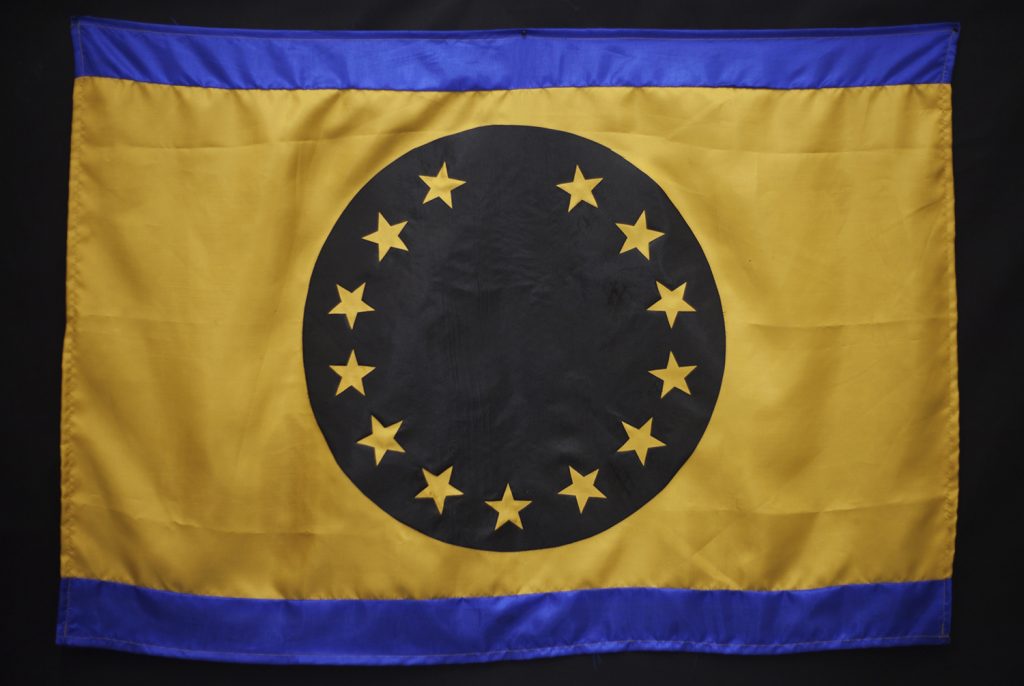 IL: Flags are effective symbols because they carry a very strong collective meaning. What can a collective learn by having immigrant individuals redesign the flag to share their own iteration?

MGM: The Revised U.S. Flag project began after I read into the history of the United States flag and I felt that so many of the decisions for its design really do not resonate with its citizens today. The basic design of the flag hasn’t changed in nearly 250 years, which is incredible if you think of all the ways in which the nation itself has grown and changed, particularly in its populace. I chose to work with immigrants on this project to ensure [the inclusion of] “new” voices to the United States, but also to challenge the man-made boundaries between nations that we unwittingly accept.

The other day, I was listening to an NPR Code Switch podcast about the way immigrants use flags while protesting. In one example, many Mexican immigrants protesting at a Donald Drumpf rally flew the Mexican flag instead of the United States flag. As one participant named Gil Sanchez put it, “they gotta remember that this was once part of Mexico, and you don’t just throw a line on the ground and say, ‘okay now everybody split up—you’re American, you’re not Mexican anymore.” This struck home as an important reminder that the boundaries we build between nations are rather arbitrary. You can occupy a particular space and yet, be a part of different cultures all at the same time. In a way, that’s what really binds the United States together—there’s a constant flux of cultures that we’re all a part of but, don’t all understand. Allowing immigrants to redesign the flag thus gives an opportunity to understand these many cultures and how they all contribute to our national framework.

This interview was edited and commissioned by the 2016-2017 Charlotte Street Curator in Residence, Lynnette Miranda, in collaboration with Informality‘s for Issue 2: Digital Studio Visits and the exhibition at la Esquina Gallery (1000 West 25 Street KCMO) open from November 18, 2016 through January 7, 2017. This interview was originally published on http://collectivegap.info/