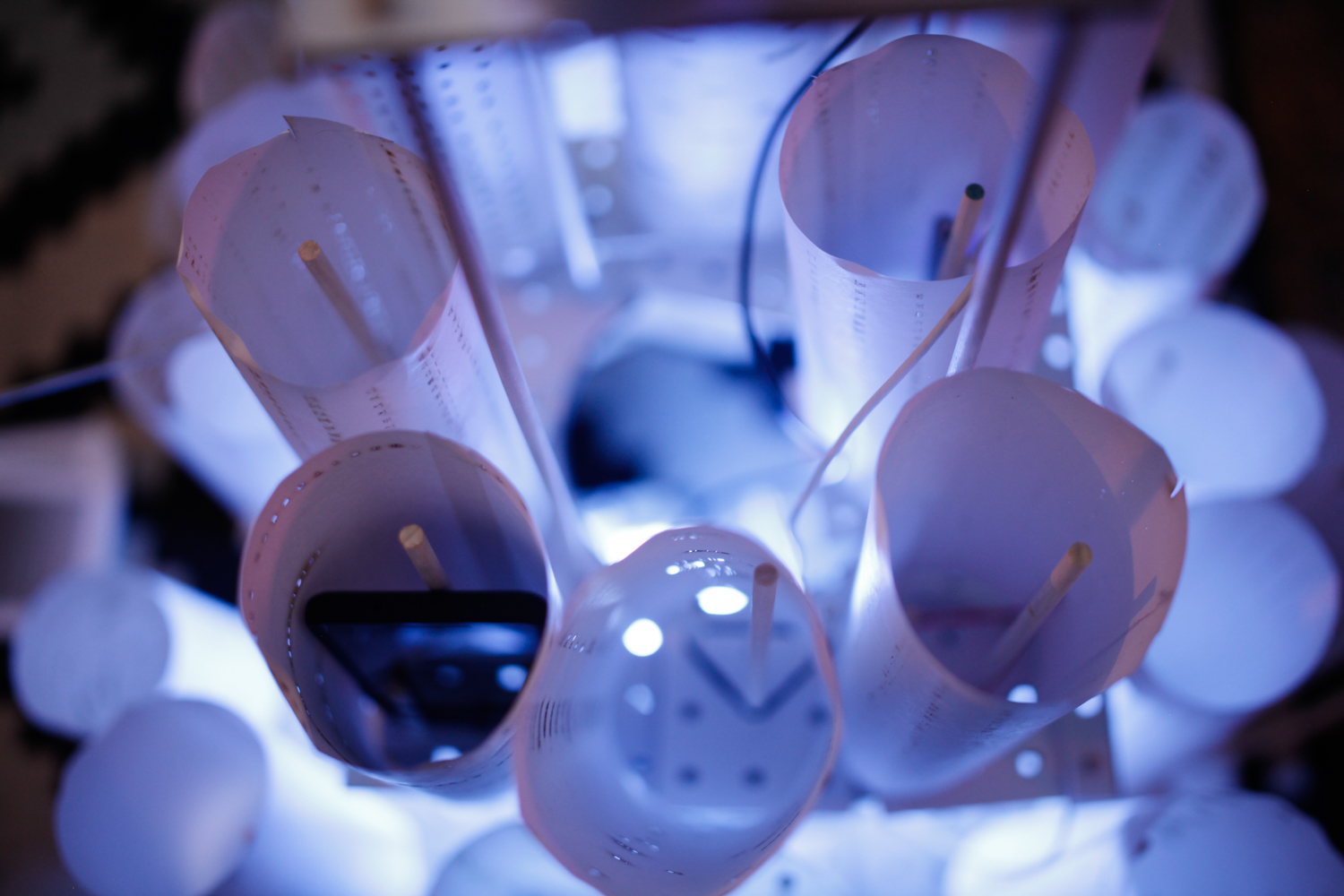 Meditation for Your Computer 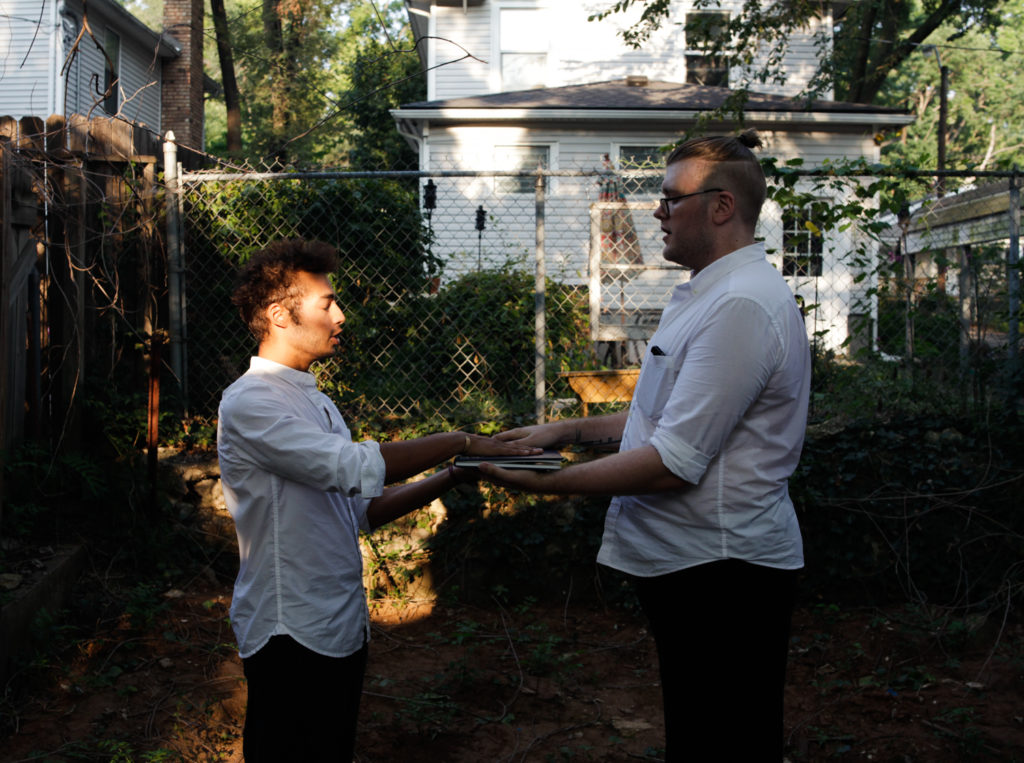 Meditation for Computers was a meditation for our own cyborg minds. Donna Haraway famously wrote about the concept of being a cyborg; a hybrid of machine and organism 1. As we have expanded our relationships to smartphones, and our dependence on them, we have absolutely begun to embody that hybrid. Many tech-enabled folks are beginning to embrace practicing mindfulness; structured in a meditation course or through something more open-ended,  like Meditation for Computers. Through being mindful, we become incredibly aware of the integration between ourselves and our machines. And at this point, we experience Haraway’s suggested split of our cyborg selves between being a “creature of lived social reality” and a “creature of fiction.”

It was almost sunset on the lawn of a house overlooking State Line Road when, at Open House, the participatory performance Meditation for Computers was about to begin. Myself and the other nine or so guests sat, cross-legged, on a black and white IKEA rug that was adorned with an alter in the center. The facilitators, FUTURE TOTAL GROUP, were wearing white, and helping each of the participants lock their phones into a state of meditation. As participants we were asked to log onto meditation for computers .com and change our phones’ settings to “never sleep” mode, while leaving the sound on. The website’s script would chime and buzz ethereal, ghost-like sounds, creating a soothing digital ambience. The devices themselves were glowing a range of colors, rubber-banded, then placed inside wooden and paper sculptures that had laser cut visual poetry along the edges. They were beautiful to observe as they glowed slowly, singing softly. The setup of the altar was similar to that of a small church’s set of holy candles. The lanterns themselves were about the size of the religious iconography candles one can buy at the grocery store. 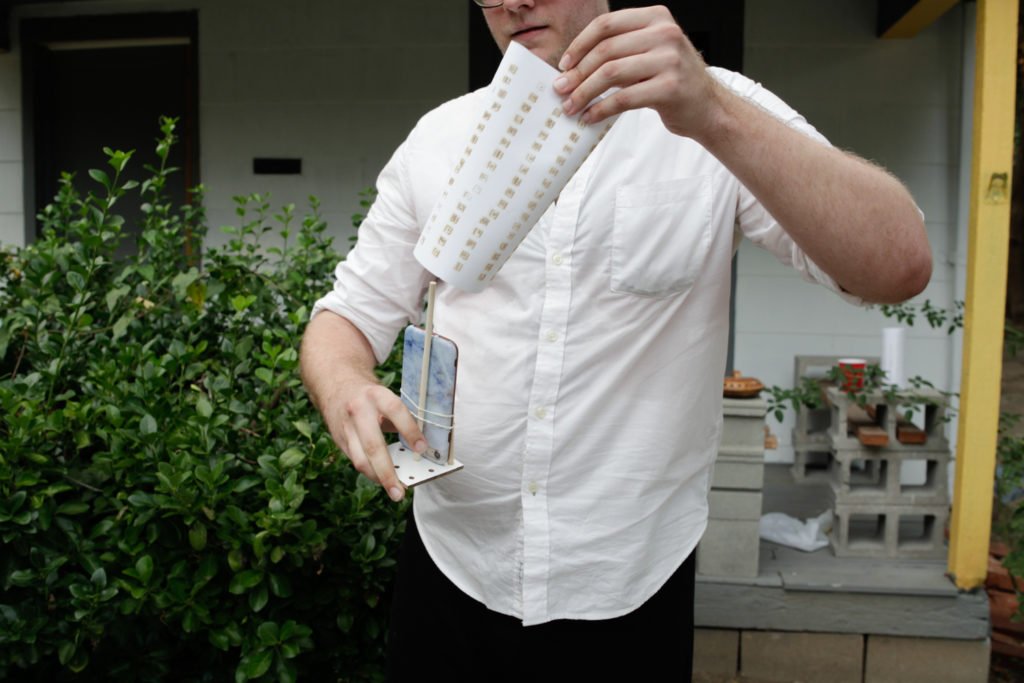 Before the performance, in a discussion with Jacob Canyon (a member of FUTURE TOTAL GROUP), we talked of how our phones are super complex computers we keep in our pockets. Yet in this situation, they can be turned into something so simple, a lantern. My phone was now just a sound making lantern rather than a complex system full of maps, social media, and unread emails. What I didn’t anticipate from this experience was an awareness of my compulsion to check my phone in social situations, and how this meditation for computers, was more of a meditation for our humanity.

Often we think of the power that is tied to the ideas and concepts in mindfulness practices, that we can better control our minds like magic. The idea of magic in terms of our relationship to our phones and computers is a peculiar one, as the cutting edge advances of a device’s newness slowly morphs into the everyday mundane objects we take for granted. It is important to remember this quote from science fiction author Arthur C. Clarke:

“Any sufficiently advanced technology is indistinguishable from magic.”

Once the performance itself began, we watched two humans interact, untethered to our devices. The artists performed a ritual exchange reading the dialogue that exists — silently — between two computers. When we initiate the click of a link to a website using the cybernetic extensions of our body (phones, computers), these things happen and we are unaware. 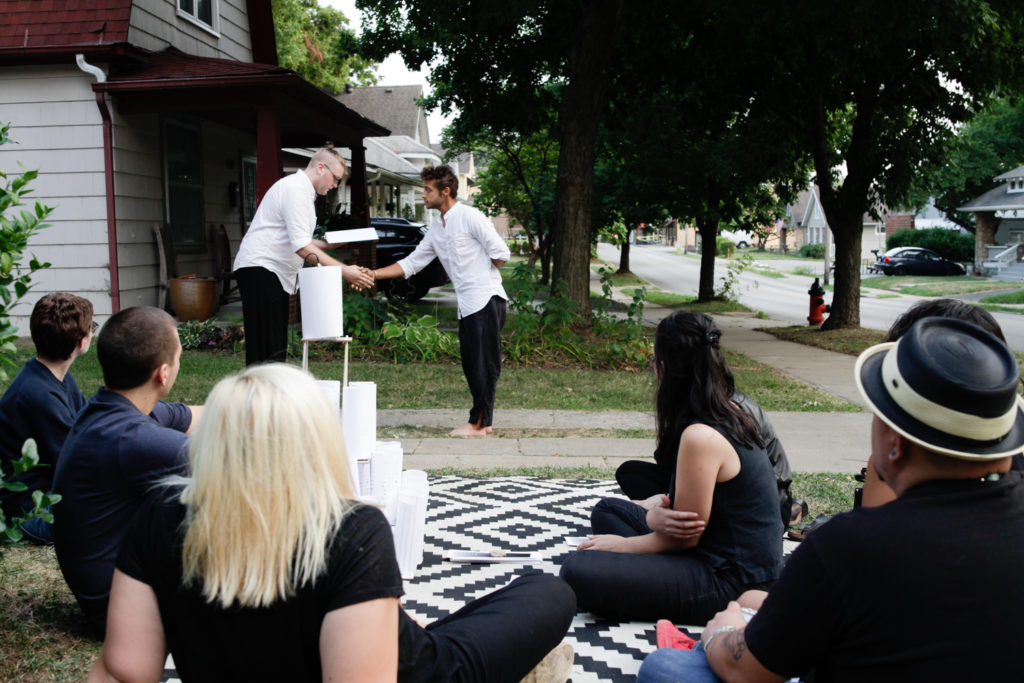 An excerpt from the performance text.

The dialogue of the performance made me think about things we take for granted behind the magic curtain of technology. The HTTP we see before websites and in hyperlinks is a conversation unseen but exchanged with a server and our devices before a website loads. Simply highlighting this code-based language for an action we take for granted, and often don’t even understand made me realize how hard-wired we have become to take these processes as a given part of normal existence. 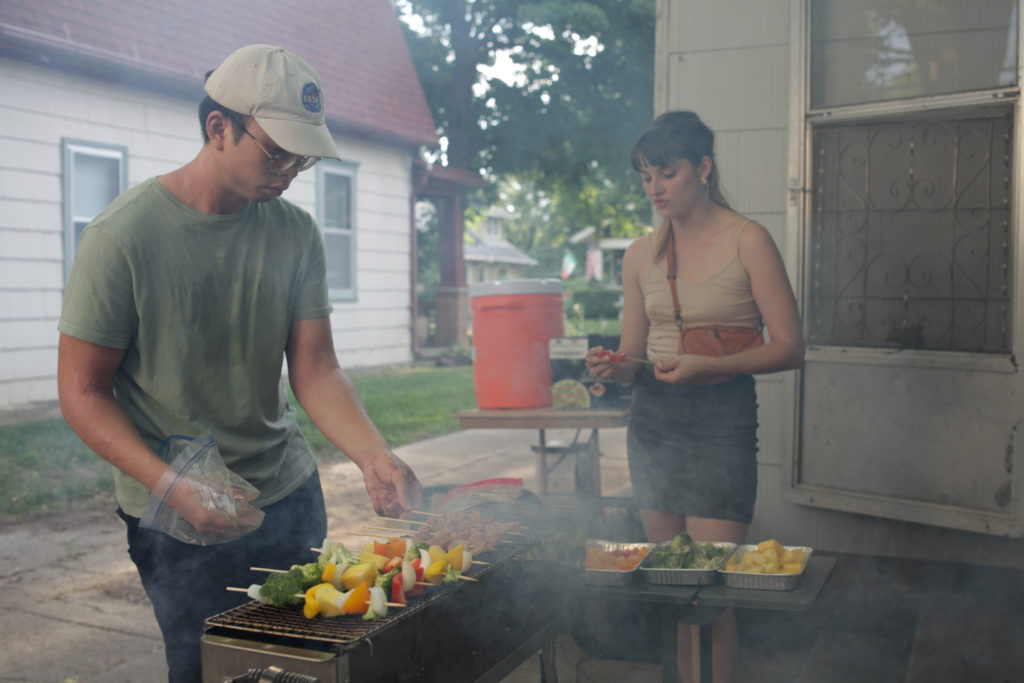 A discussion of what happens between ourselves and our computers followed the performance. The artists served us grilled kebabs, a clever reference to a chain of code, and we were encouraged to mingle, with our devices still placed in lanterns. We talked more, undistracted, and landed back on the magic we experience with our computers. One particular conversation that stuck with me was how our computers function when they save a file.

“The mark itself is a memory”

I stared at the laser cut scars of letters on the paper of my lantern until this statement hit me.

“Wait, what? Repeat and unpack that.”

“The mark on the drive itself is just telling the computer to index this moment in the file’s history. The process of saving is making a facsimile of what is on the screen so that you can return to it later”

Of course Jacob and I were talking about the simplicity of code. The browser cache works in a similar way. 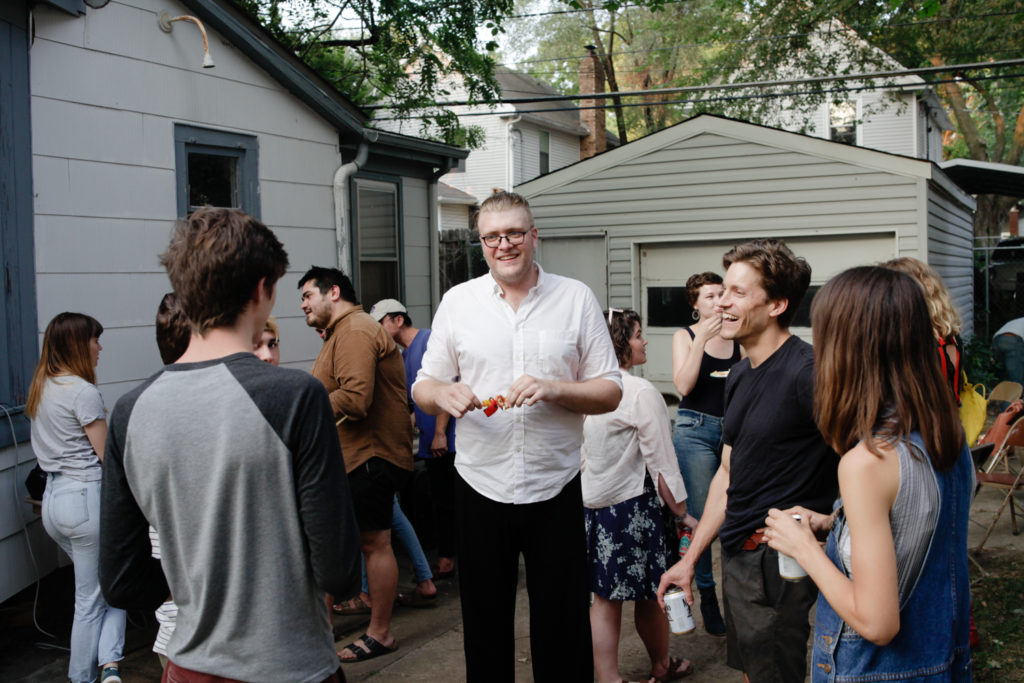 Discussion flowed freely after the performance and over food. Image courtesy of Open House.

“That’s what the Max Age 0 line is in the performance, its the length of time the cache will lapse not uploading new scripts.”

The scripts are files the browser keeps saved for later, pre-experienced codes, that help websites load faster the next time you visit them. This let the conversation meander again, and we began chatting about how we have our own individual “browser caches” of subjective experiences that color our present with the past and future.

My watch vibrated and I looked down at my wrist. My battery was at less than 10%. I had the power to see what my phone was doing inside of the lantern with my watch. I didn’t have the ability to check my phone when the conversation lulled, I was separate from it, but I wasn’t separate entirely from the vibrations. 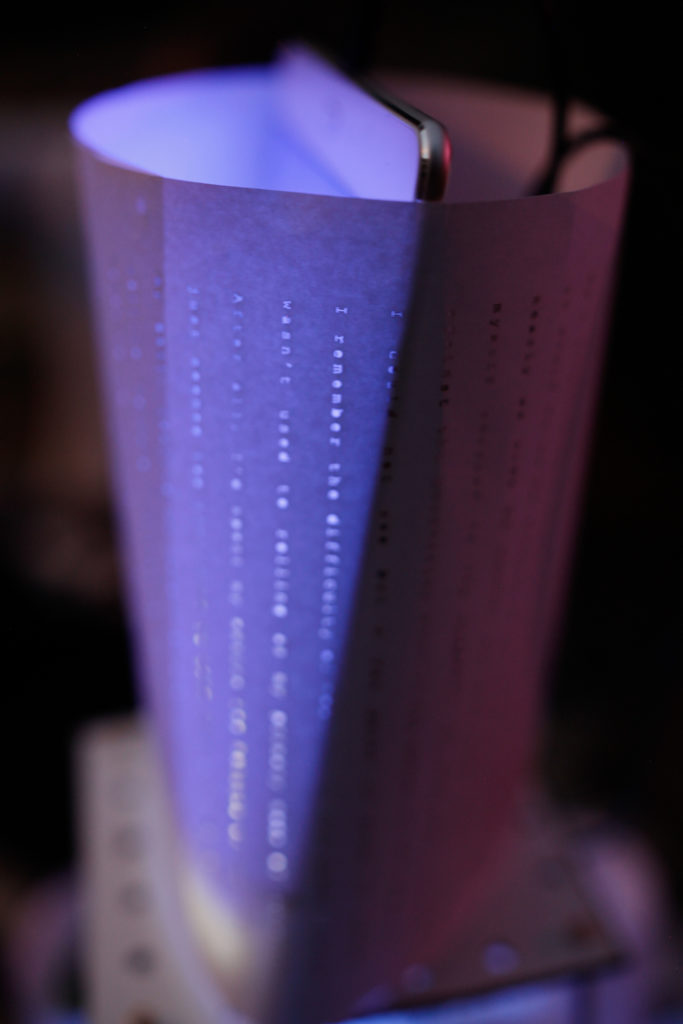 A computer in meditation. Image Courtesy of Open House

“So, does that thing ever give you phantom vibrations?”

“All the time. Its like my mind is planning for an interaction that is delayed or never happens.”

Our phones are sense organs that exist outside our bodies. We started chatting about how our computers simulate touch, they hear us, they touch us and they feel and respond to our touches. I watched my phone glowing blue and white through the paper of the lantern thinking about my own addictive relationship with the comfort of it as an entertaining object. Yet that coincides with the tendencies this device has to grab my attention and power to feel something intensely, even when it is a simulation.

As the night came to an end, we realized the meditation for computers was a meditation for ourselves. We are cyborgs now, it’s good to give our processes a break from trying to over-understand its information and stimuli. Through the action and encoding onto our moment-to-moment processes, we can be reminded of the magic that is now indistinguishable from everyday life.

Meditation for Computers by FUTURE TOTAL GROUP took place at Open House on August 9th, 10th, and 11th 2018 from 7-9 pm. More information on the project can be seen here.