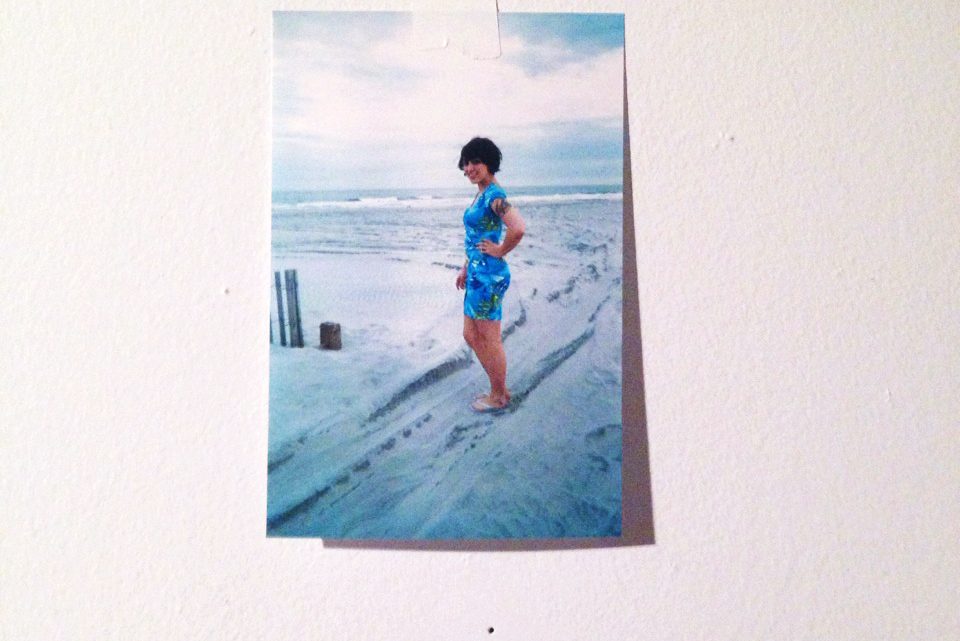 Michelle Lee Examines Familial History Through the Process of Photography

Isabel Vargas talks to Michelle Lee about using photography as a medium, material, and process to excavate and examine complicated familial history through a feminist and intersectional lens.

Michelle Lee is an artist who primarily works in photography and written forms as a way to extrapolate on specific personal experiences with a larger phenomenon. Lee’s work utilizes the idea of ephemera to set an undertone of nostalgia for some of the images and objects she uses. In turn, this acts as a catalyst for the psychological and familial mode of Lee’s work. A lot of the images Lee deals with, are personal or seem personal. In some of her works, Lee uses pictures of a mother figure, alongside different types of ephemera to reflect on maternal relationships. Her command over personal feminine narratives, is introspective and displayed for others to see, which aids in closing the empathy gap when it comes to the way women navigate the world. 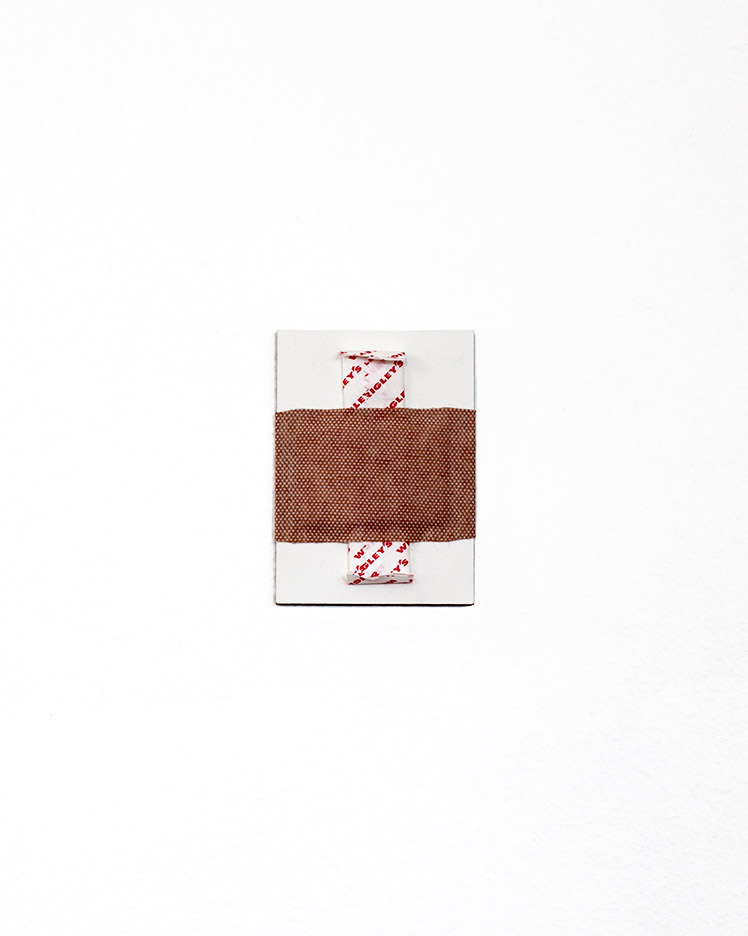 Token Of Gratitude by Michelle Lee. Image Courtesy of the Artist

ISABEL VARGAS: You utilize personal images throughout your work. How comfortable are you with your role in that image’s history? Does your work aim to heighten the history behind them?

MICHELLE LEE: I think most images an artist chooses to share are personal in some form or another. What the audience gets to see may not reveal that. Whether the image is a photograph they made, found in the street, or pulled from the internet, if the artist is choosing to share an image they have made the choice to do so. When I rediscovered my childhood photo album (which has become a very important resource for my work) I began looking for an unshared history, I wanted the photographs to speak for themselves, to reveal their magic to me. I realized I will never find those answers. If I ask my family questions about these photographs, their response is always skewed. If I use a photograph from that album, I am using it because it has made an impression and I choose to share that sentiment with others.

Excerpt from Aye Mama by Michelle Lee. Image Courtesy of the Artist

My photo explorations started off in a vein of documentary work. For Aye Mama, I photographed my mother and simultaneously used photographs from our archive of her to understand her transformation as a person over time. Within that work there is another direct comparison of my bedroom door, it shows the door as it existed, and the last image documents a note my mother left me with nail polish. When I Was Your Age takes a image from my childhood album, a sonogram of myself inside my mother, and compares it with a future pregnant me that has a before and after. Not only am I comparing personal histories, but also how the printed material has changed over time. The 1990 sonogram is a polaroid, and my 2015 sonograms are thermal prints.

I’ve used photography to document performative acts. For example, in Penelope I give my mother the agency to dress, style, and photograph me. It’s an exploration of an alternative self; myself as my mother would want me. I view it as a role reversal from the photographs I made of her in Aye Mama. Que Sera helped me break away from a strictly 2D space and it allowed me to mimic the movements my mother has made with photographs while in a manic state and experiment with display. Just in Case Pero Ojala Que No, which is in ¿Qué Pasa, USA?, also allowed me to explore the photograph as a material/tool for something else, in this case it was a contextual material in order to create a 3D object. 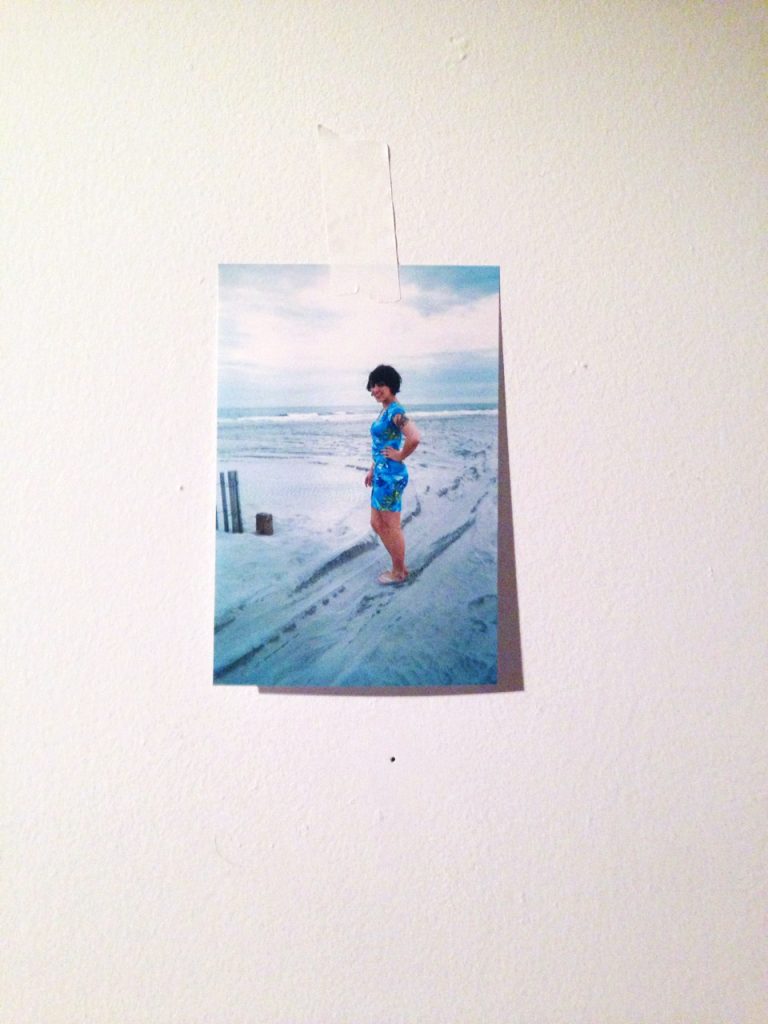 Penelope by Michelle Lee. Image Courtesy of the Artist

IV: There is an overarching personal narrative in your work, does this connect to a universal theme or idea? What material uses or processes are you using to explore that?

I believe art making is a personal process, no matter if the work is focused on internal/external narratives, material explorations or more collaborative social practices.

A majority of my work reflects upon my life which involves several political narratives. Having a mother, who has been diagnosed with bipolar disorder, a mother who was not born in this country, being a person of mixed cultures, being a person who has had an abortion. I often rely on images to help me unpack these ideas, as they can be documents, hold time, or be representations of them. In regards to the work in ¿Que Pasa USA?, for Just in Case Pero Ojala Que No (2016) I used an image I made, printed it on cotton and sewed it into a hospital gown. The transformation of this photograph that existed in negative form to a three dimensional object was rather intoxicating. The photograph is of the Atlantic Ocean, it’s taken where my mother lives, and it is an image and idea that brings her peace. Since she first moved out to the East Coast our lives have been relatively stable, this piece was born out of the idea of anticipating what might happen if I disrupt that stability. With, I MADE A FRIEND TODAY (2016), I rely on the reader’s imagination to create the image of the woman behind the zine with the context that I have provided. I’m making more of an effort to use the idea of image in other ways of working to help unfold these ideas.

Luis Camnitzer says, “art is a way of organizing and acquiring knowledge, and not just making things.” I use the process of art making to try to understand what I don’t fully or what I want to understand more. For now, I have used it to come to terms with my own turmoils in life, while I’m sure I will continue to use it that way for ever, I am ready to explore other concepts of my own personal curiosity.

IV: In your work, through your use of images of your mother, there seems to be a narrative that is reverent toward your mother, a mother, or the idea of the mother. How do matriarchal relationships play a role in your work? Does it play a major role?

The relationship I have with my mother plays a major role in my work. For most of my pre-18 year old life, I grew up an only child living with my single parent mother. My mom attended a university from 1992 to 1998, when I was between the ages of 2-8 years old. I would go to class with her and sit in the back and draw. Once I was older, and because I was better at English, I would help her with her papers. I don’t think I understood that my mom had bipolar disorder as a child. My mom was my hero, I was spoiled, she was awesome…and then one day I had to call 9-1-1 on her. Both of our lives changed dramatically after that.

Most people reach an age where they understand that their parents are flawed, only because they are human. I worked through those ideas from ages 8 to 10. As I got older, the narrative got more complicated as I started to understand life more. I have been interested in matriarchal relationships within my work, but more as a way for me to connect with my abuela who died before I was born. I have never done any research in regards to matriarchal relationships. I don’t think the work I do with my mother fits the matriarchal description. There has been a lot of role reversal where I have had to be a mother, provider, caretaker. I haven’t really questioned it, it is what it is, but I do think it’s special.

While I was in college, I started photographing my mother. I used the camera in a literal way, as a lens to understand her. She was not who I remembered as a child, she had changed, I thought American culture had changed her. In many ways, we had become opposites. At some point I realized that this is something we had both done before, when I was a child we would dress up and take turns photographing each other. For a long time photographing my mother is how I rebuilt and reconnected with her when I felt like it was hard to connect in other ways. 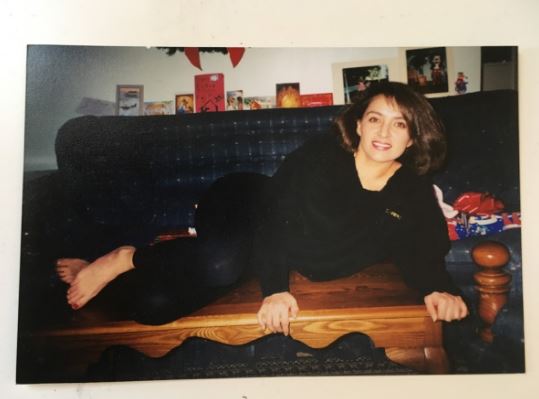 Photograph taken by Michelle Lee in 1996

In and out of college, I have struggled with making work that is so personal. I didn’t want to be labeled as an artist that only makes work about their mom. I moved to the east coast after college, away from my mother, not knowing what was going to happen to her or my future. Of course, she drove out here in a U-Haul truck, I’m pretty sure it was the farthest she’s ever driven. I thought she was going to die on the winding PA Turnpike. She was homeless, living in motels for a while. She got drugged, she was hospitalized, she settled on an island in New Jersey. She’s a fighter and a survivor. She followed me out here and at that point I was like, well I guess I have no choice.

Since she has moved out here, I’ve collaborated with my mother three times. I suppose if I include When I Was Your Age it would be four, but she doesn’t really know about that piece and I am in no rush to present it to her.

Hold Tight by Michelle Lee. Image Courtesy of the Artist

IV: Thinking about the premise of your zine I MADE A FRIEND TODAY, these stories, that are personal and intuitive, are they a platform to get readers to empathize with the person who is telling them? Inspecting this work in a larger context, is this a platform to get a general audience to empathize with, or in some cases relate to, the experiences these women are sharing?

Every so often I would get a text from my mom, “I met so and so on the bus and he wants to take me to dinner, should I do it?” I am protective of my mother navigating Atlantic City by herself, so I follow up on these stories. There has been moments where she has kept the results of these confrontations a secret from me. I do live in fear of my mother being raped or murdered, and when I have those thoughts it feels so extreme. I MADE A FRIEND TODAY doesn’t go that far, but it highlights some of the complications of being a woman and reveals some of the systematic networks of how this specific person navigates through the world.

I MADE A FRIEND TODAY came out of a sense of urgency and necessity. I’ve learned that the more time you sit with and share the uncomfortable moments of your life the easier and more light hearted they become. By sharing these incidents, there is room for the reader to empathize with the narrator, relate to the narrator, feel uncomfortable with narrator’s decisions, and feel uncomfortable with the motivations of the men depicted. More than anything, I think it emphasizes the fact that morality is complicated, and existence is complicated.