Placed around the gallery are sculptural forms of women that defy presumed standards of beauty coexisting with ceramic bedazzled panties. Within these offsetting representations of femininity lie truths about beauty, all held within a thick coat of Rococo pizazz.  Misty Gamble’s ten-year retrospective, Decade, at the Leedy-Voulkos Art Center, takes a critical stance on the problems of womanhood, indulgence, and modern day communication. A current professor at School of Foundations at the Kansas City Art Institute, Gamble’s work fetishisizes the cultural critique of women, while challenging the current status quo of communication in present time.

The interesting part lies where these two ideas merge to create one societal commentary.  Women are used in advertising to sexualize everything, from hamburgers to high end cars.  Selling through the lens and seduction of the body activates the desire of consumers.  Gamble is taking our knowledge of this and exploiting it; we are aware of our tendencies to be attracted to things that look good on the exterior, while the interior tells a more haunting truth. The work also provides a disturbing look at the reality of women’s lived experience, mainly in the realm of body image and introspection.  There lies a strong contrast between Gamble’s figures and the thin, photoshopped celebrity ideals that are at the heart of American culture. These psychological connections bring about a disturbing, yet real narrative of the lives of women who exist outside society’s connotations of beautiful.

Nelly Has Scissors by Misty Gamble. Photo by Erin Woodworth.

The superficial surfaces of seductive color Gamble uses wisely, making us get close, look deep, and see figures with truths that are haunting, painful and close to reality.  This work stands in contrast to the fixated realms of body image. Deeper psychological connections are brought to the surface and illuminate the lives of women who exist outside society’s strict rules of beautiful.

In viewing this body of work as individually, the themes of feminism, cultural critique, and capitalist overindulgence appear.  The celebratory use of gender-specific objects woven with glitter and sequins provide a flashy take on womanhood that we normally don’t get to embrace without the fear of criticism.  In all of Gamble’s depictions, they are sculpted with a hand of sympathy.  Gamble simulates the lived experience of womanhood through the facial expressions and body positionings of the figures.  The most emotion provoking and haunting gazes lie in the eyes of her full-body sculptures, depicting figures of different ages as sleep-deprived zombies.  Each one of these works provides a snapshot of the playfulness and compliance that every good woman is expected to possess. 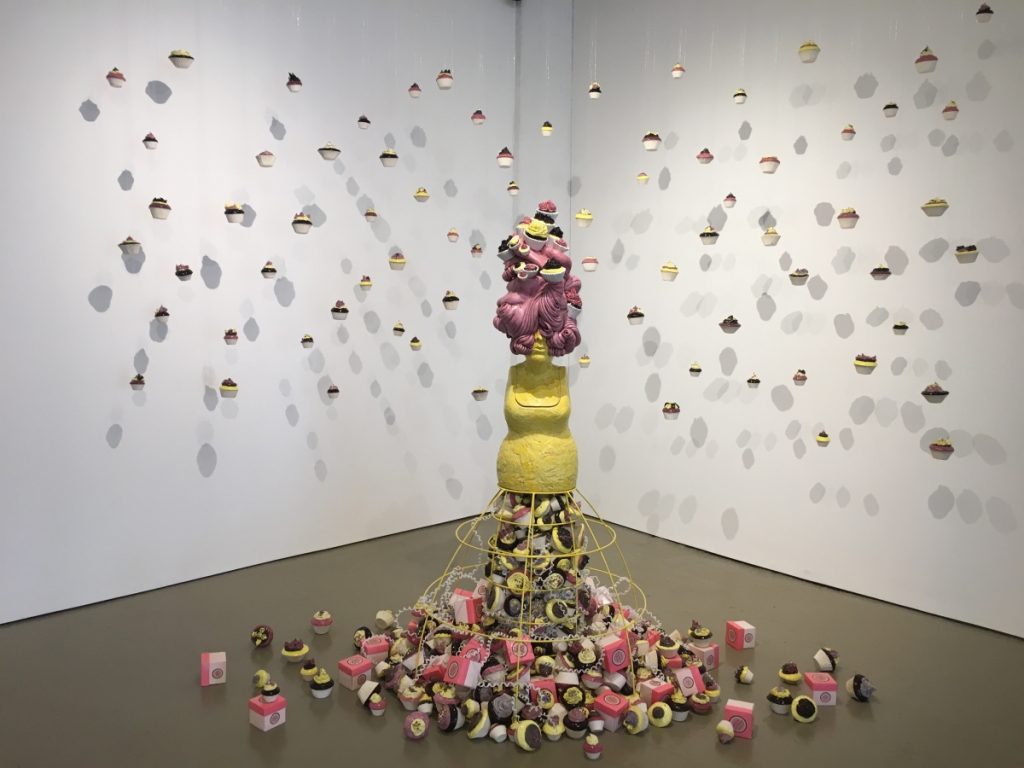 While her work draws references to physicalities and bodily deformations, Gamble also sheds light on the psyche of women.  In her sculptural busts, the identity of the figures is taken over by the unrealistic standards imposed on them.  These pieces usually contain abstracted cranial deformations or something the audience can grasp as concrete, such as cupcakes. Gamble’s work reveals private conflicts inside the mind of a woman, mainly in her use of gesturing and sexual objectification. This creates tension between the viewers and the work, as some of the pieces are hard to face for long.  It is important to witness is the extreme, personal connection viewers form with each one of these works.  We can either relate to the emotional state of the figures, or to the trance you’re brought into as you’re encompassed in them while you come together with various states of the human gaze. 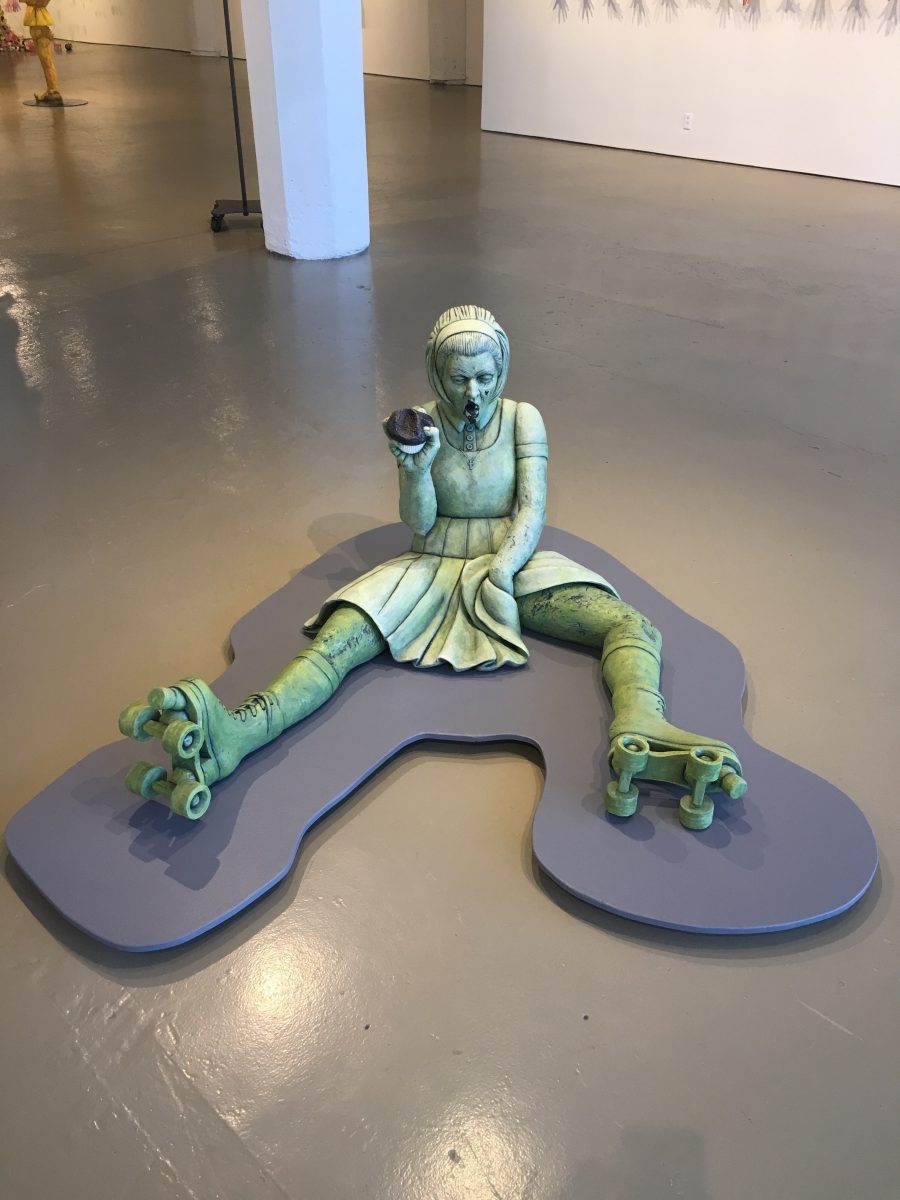 Overall, Gamble challenges the stereotype of women by exposing the underlying fetishes and their flirtation with disaster.  By exploring the psyche of an individual, she distinguishes the various levels of consciousness we possess, and acknowledges the struggles we face ethically as humans capable of change.  Gamble’s exhibition has a conversation with the contemporary political climate, as her work shifts throughout this showcased decade.  With the ethical stances held by the majority of America seemingly shifting backwards in progress, we face the problem of gender equality being exploited even more than it was under previous administrations.  Gamble’s work shifts the conversation from the acknowledgement of the divide and it’s prominence within a contemporary context, to making a comment on the emotional tolls that challenge has on women and their individual psyches.

Misty Gamble: Decade runs from January 6th, 2017- April 1st, 2017 at the Leedy-Voulkos Art Center. More info on the exhibition can be found here