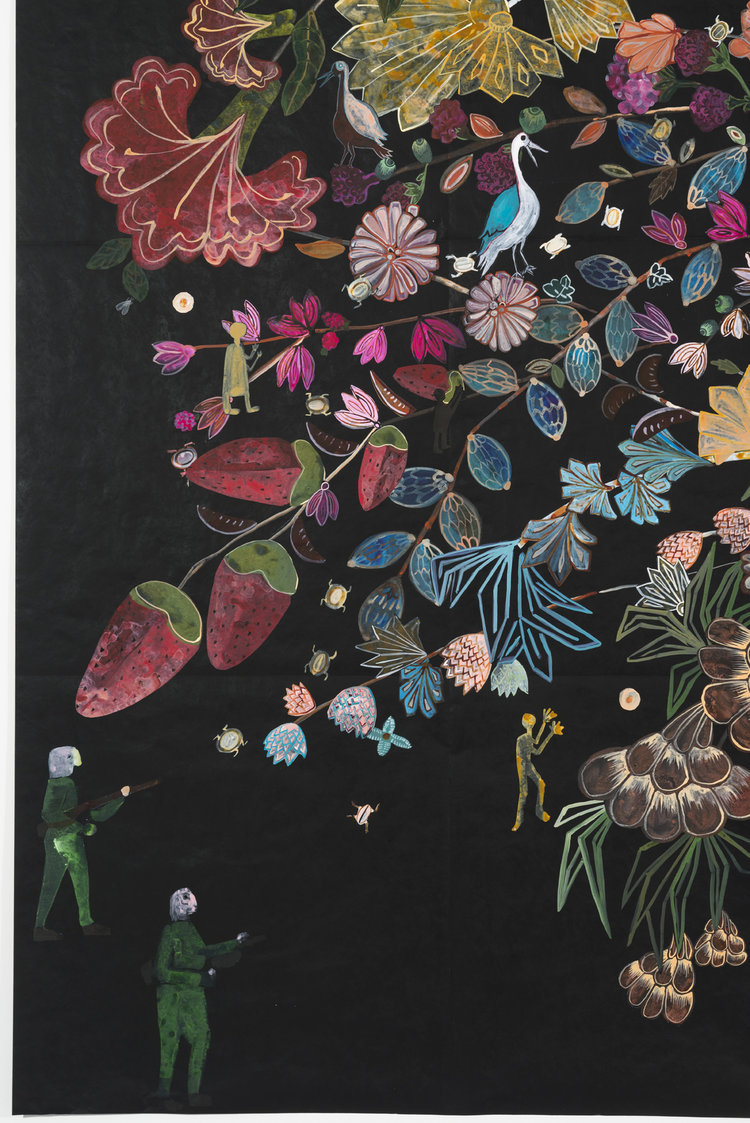 Spanish Colonial culture is at the core of Nancy Friedemann-Sanchez’ practice. She lays bare a centuries-old history that is neither diluted nor forgotten but is remembered in specific objects. One is easily entranced by how seamlessly this historical tension is as much a part of the scenery as is its captured beauty.

The history of the Spaniards influence on Central American culture is now fully ingrained and Friedemann-Sanchez neither hides nor exaggerates this influence. The large-scale of her paintings appear as a historical reckoning. Their beauty is undeniable, but closer inspection reveals these influences have infiltrated and altered the original landscape. The artist deftly considers these changes with a subtle critique.

As a series, the paintings contain several similarities. The flora and fauna might change and you soon notice tiny figures with guns throughout these works. These armed men and the drones that buzz about the paintings allude to the Colombian Conflict, which has been ongoing since 1964. Subtle, discreet, but very present everywhere, they are a portrayal of a history that superficially appears as a naturally occurring effect. But the artists’ small depictions present a very steep infiltration occurring over centuries. 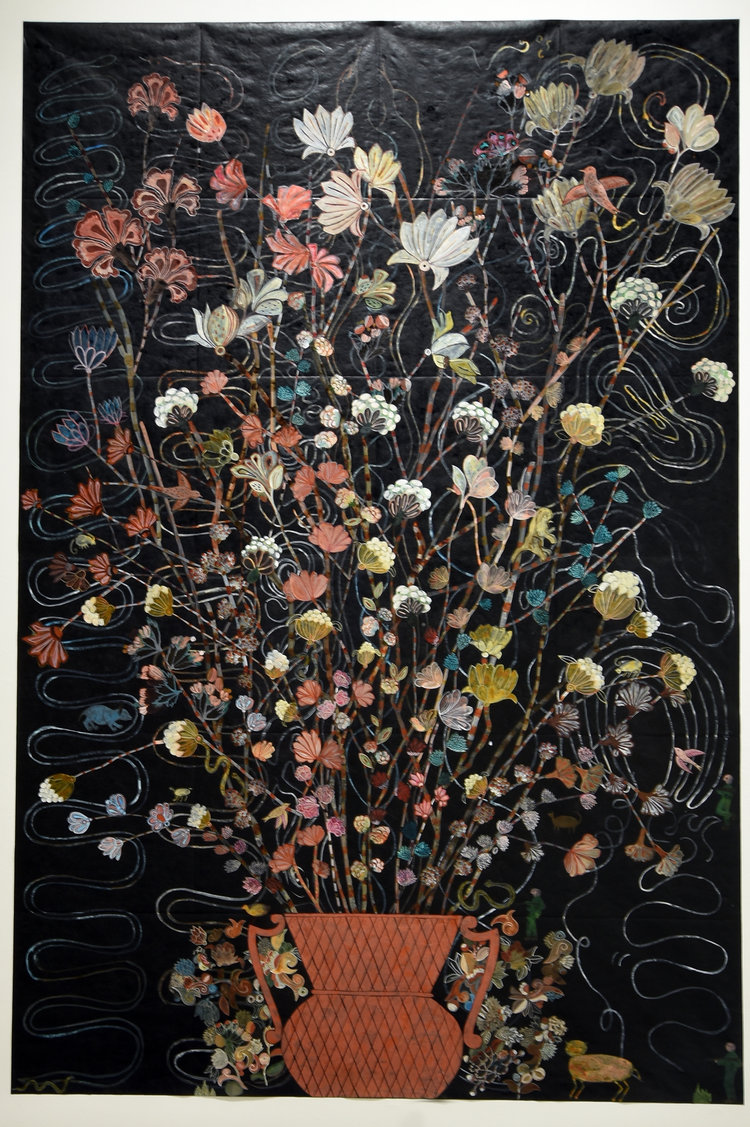 Too, hollow serpents wend their way around the central images of plants. The plants are exactly the place for the serpents to inhabit.  When not directly within the flora,  they are on the borders as well, waiting to strike. For the viewer to see them on the periphery  speaks to the invasive forces of chaos and militarization.  This historical contextualization Friedemann-Sánchez presents to us is an overwhelming presence of forces that exemplify the trauma of colonization that extended all the way north to Mexico with the Fall of Tenochtitlan around 1521, where the Spanish seized access to the Pacific Ocean, creating new routes to Asia.  It’s exhausting and as a naturally occurring environment, leaving pause to question what the landscape might otherwise look like if an invasion of centuries past had never occurred.

Friedemann-Sánchez maintains a flattened, tonal perspective on her paintings to offer a resolute and unadorned version of this history lesson. The colors don’t pop off the black-toned Tyvek panels, they’re anchored as collage pieces.  You can see the points up close where these panels create a dimensional ability to possibly come undone and float away. Changes aren’t permanent and even the invaders can reconsider is the message I am receiving. The artist herself says, Tyvek is not paper, its use is “multi-determined.” Speaking with the artist via email, she notes the resilience of Tyvek’s archival properties. Similar to “the resilience of someone who migrates and moves around.  The material is industrial and creates a bridge to the past; it makes use of contemporary technologies.” The colonists who migrated had their own cultural adapting. It was necessary to change from their accustomed Arabic and European pigments to egg and other local materials to create botanical illustrations. “In doing so, they transformed a tradition.” 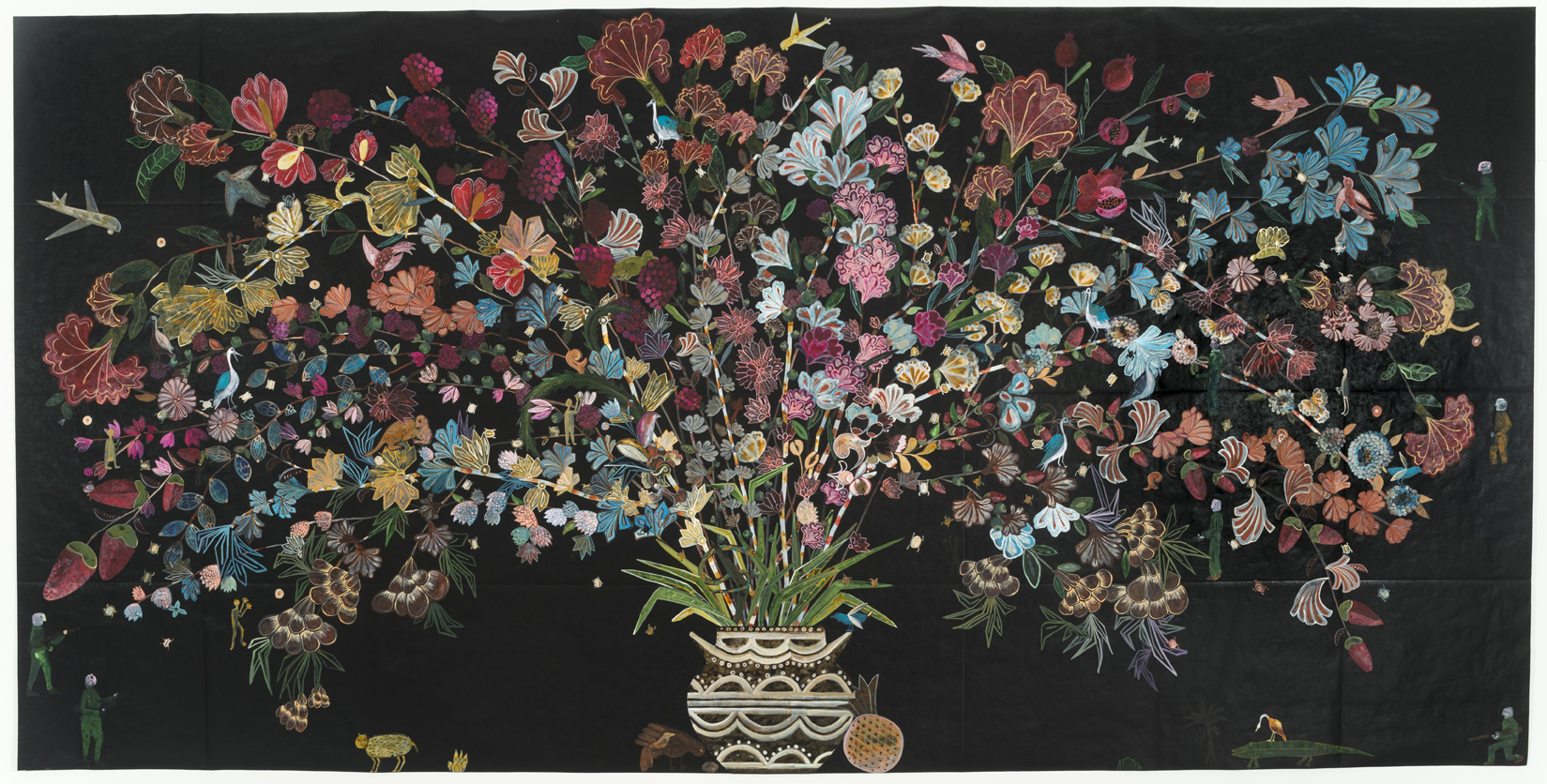 Cornucopia No3 India Ink on Tyvek

These are paintings of a scale that is much closer to a political wheatpaste; where nothing is written, but these images of beauty and brutality say far more than  any pithy catchphrase. Nor is it necessary to pontificate upon its rationality or even its existence. Freidemann-Sanchez takes us right into the middle of the scenario; not what once was, not what might it have been, but a direct descent into the gullet of present-day.

Viewing this work multiple times is necessary; each visit is a story, a parable, tales of invasion and evolution. The artists’ portrayal of the history of colonization and its violence is alive not only in Colombia but in the United States as well, where violence is a state in which we are far too comfortable. Friedemann-Sánchez presents an understanding that Spanish Colonial Painting is “a patriarchal and ideological tool of subjugation” and everything that is stolen has been stolen before. If history has taught us anything, it’s that civilization is mostly predicated upon the con of changing and protecting history to suit one’s comfort. Friedemann-Sánchez shows us very directly and very specifically, that every garden has its walls. 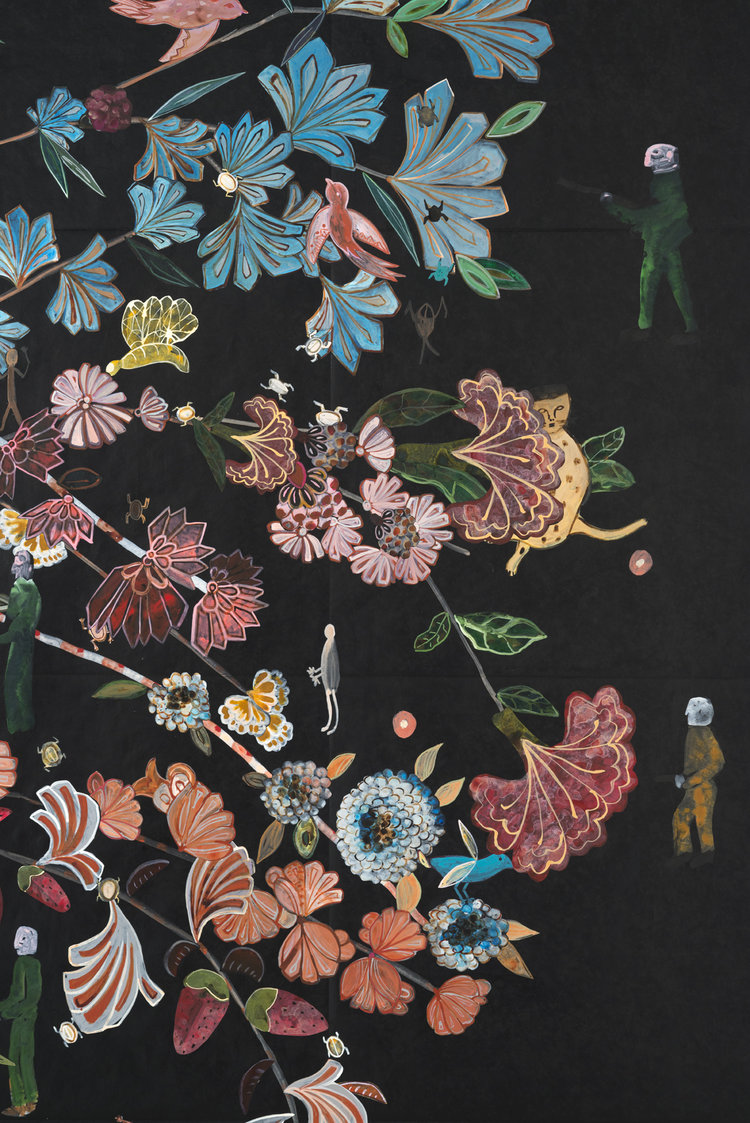 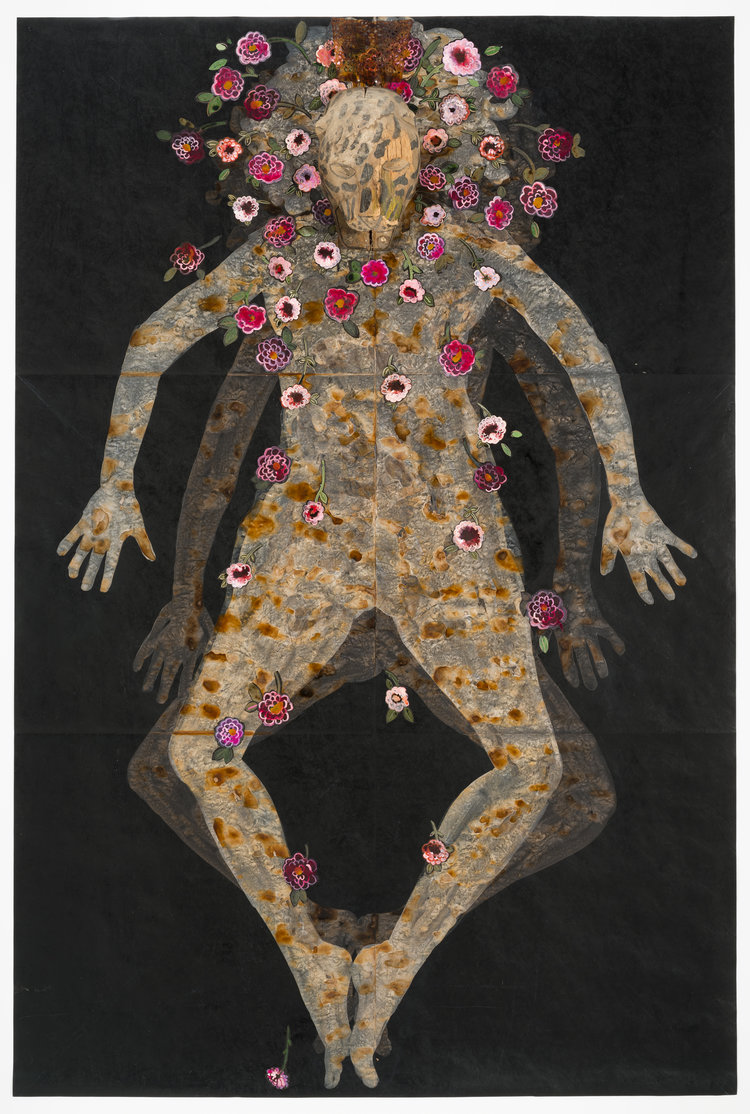