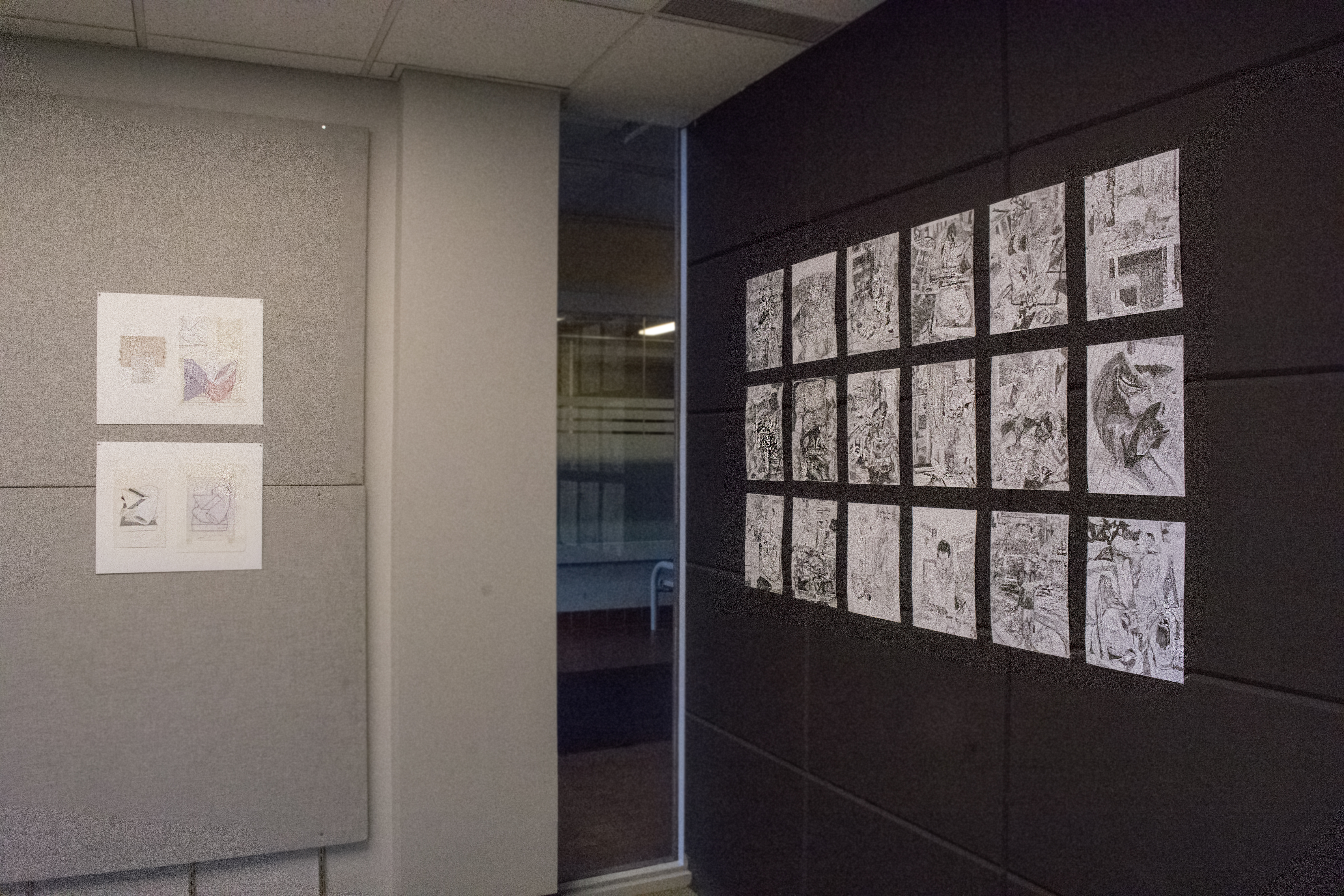 Over and Over and Again! But Not The Same

The work of Baron Mattern and Max Pond were shown together in an act of radical transparency; the artists let the viewers into the process behind their practice. The two shared iterations of studies, drafts of places, more developed works on paper and other impermanent surfaces pending completion. The idea of drawing itself is a central component to each of these versions. Again! But Not The Same at Curiouser & Curiouser gallery, examined the steps one takes towards a finished work. I viewed the show through a diagram of my own questions that could be provoking these artists.

How do you capture the moving surface of the observable world? The drafts, cut paper collages and other tedious works in this exhibition aim towards representation of information that exists by feelings and instincts, rather than words of physical space. The investigative nature of these artists’ drawings are shown through versions in their draft stages. I love to look at drawings in this way; of steps towards something because of this iterative and vulnerable nature. Tracing the lines to intricacies and places where the feeling  becomes visible. The works of these two artists presented themselves in many ideas of resolution, the plans are not always distinguishable from the final product, but perhaps just as important.

Unfolding in many mediums, Mattern presents numerous points of perspective. One wall displayed contour drawings of plants that were taken from pages of the same notebook and hung in a grid form with some open spaces. As if by walking around the object itself, understanding each leaf I saw a plant. Mattern’s sensibility of versions is like an essay written in list format. He took a large experience and divvied it out to a multitude of places; indicative of a kind of rhythm of watching. The sketchbook pages and format of generally 8.5” x 11” or 9” x 12” suggest the kind of repetition it takes to make a drawing transcendent; evoking being with the thing itself. Again! Again! But it is not quite the same. Each iteration of an experience exposes the process of seeing and reiterating. It’s about showing what it means to be in proximity to a thing, observing it fully. The series makes the dimensionality of the plant distinct. Cutting paper, studying models, still or not (paper models or plants) breaking down time and space for interpretation. The observable world comes through the artists headspace and onto a piece of paper. Through observing these iterations we become familiar with the proximity to the concept or form of something.

How do you capture the fluctuation of the ideas swimming in our head? Pond’s blueprint-like work revealed the role of explaining to the process of making; to attempt finding an answer. He uses tracing paper, grids, various colored utensils, measurements and text. A large flat piece of shaped canvas, as static as an individual drawing on the intersecting wall of drawings is a product of one of these blueprint-like drawings I saw in a neighboring room of the office shaped gallery. You could view the painting with and through its influence by the sketches and iterations, in a radical transparency. It shows that artists were willing to share the process, the many steps leading to a momentary end; until the next idea comes. In one work by Pond, I read on a piece of paper pulled from his notebook and taped onto the drawing:

“Q: WHAT’S YOUR ART ABOUT? A: OH DON’T WORRY ABOUT THAT. IT’S A PERSONAL PROBLEM I NEED TO DEAL WITH” 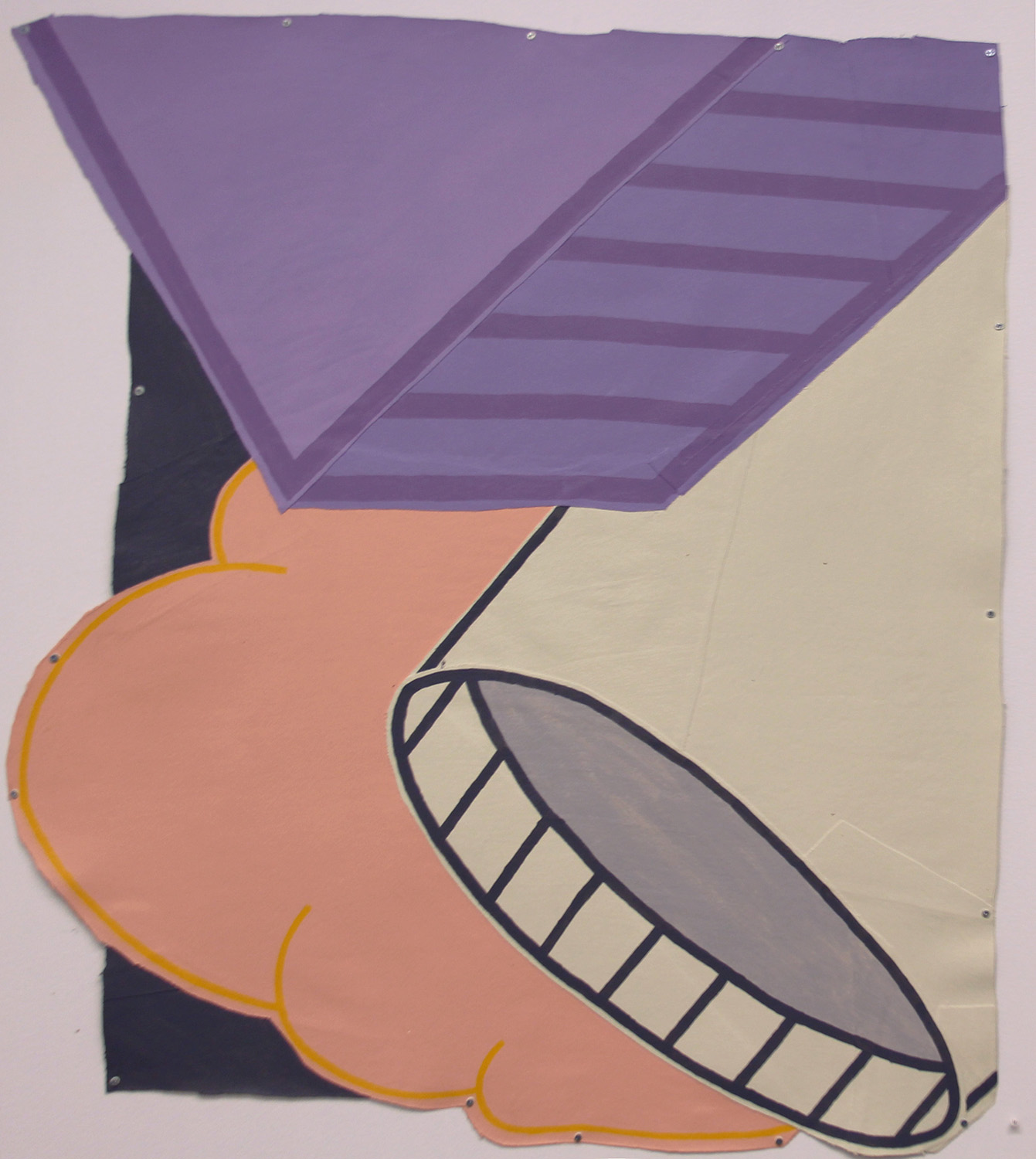 Surrounded by other statements in a stream of consciousness. There is a kind of care of planning that is elaborate and ironic up against the raw cut canvas. As if sharing their thoughts surrounding the plans clarify where the plans are leading. Small gestures and layers of tracing paper determine the wide range of this practice. To find the end result, sometimes nonsensical testing, intuitive searching, and quick actions of drawings take you there. The openness of process and expeditiousness draws out more understanding. There is something intuitive and reactionary to an object becoming through an artwork.

Drawings of spaces by Mattern are gridded on a soft wall in another small office space. Each one a dance of marks tracked an abundant amount of information: restless sleeping, a dog on a couch, standing on a sidewalk surrounded by bustling foliage and vehicles. Each space depicted is not entirely still, the quick scribbles notate where a subject is moving in the drawing. Quick gestures, intrinsic to the works in the exhibition, inform slower, more meditative movements. Movement and pacing is at the core of these drawings.  Like a live photograph on an iPhone, the information piles up like a flip book. In the middle of a moment, seeing that instance and what followed. These are much like the process Pond seemingly carries out, with actual layers of paper at different opacities to realize something more. 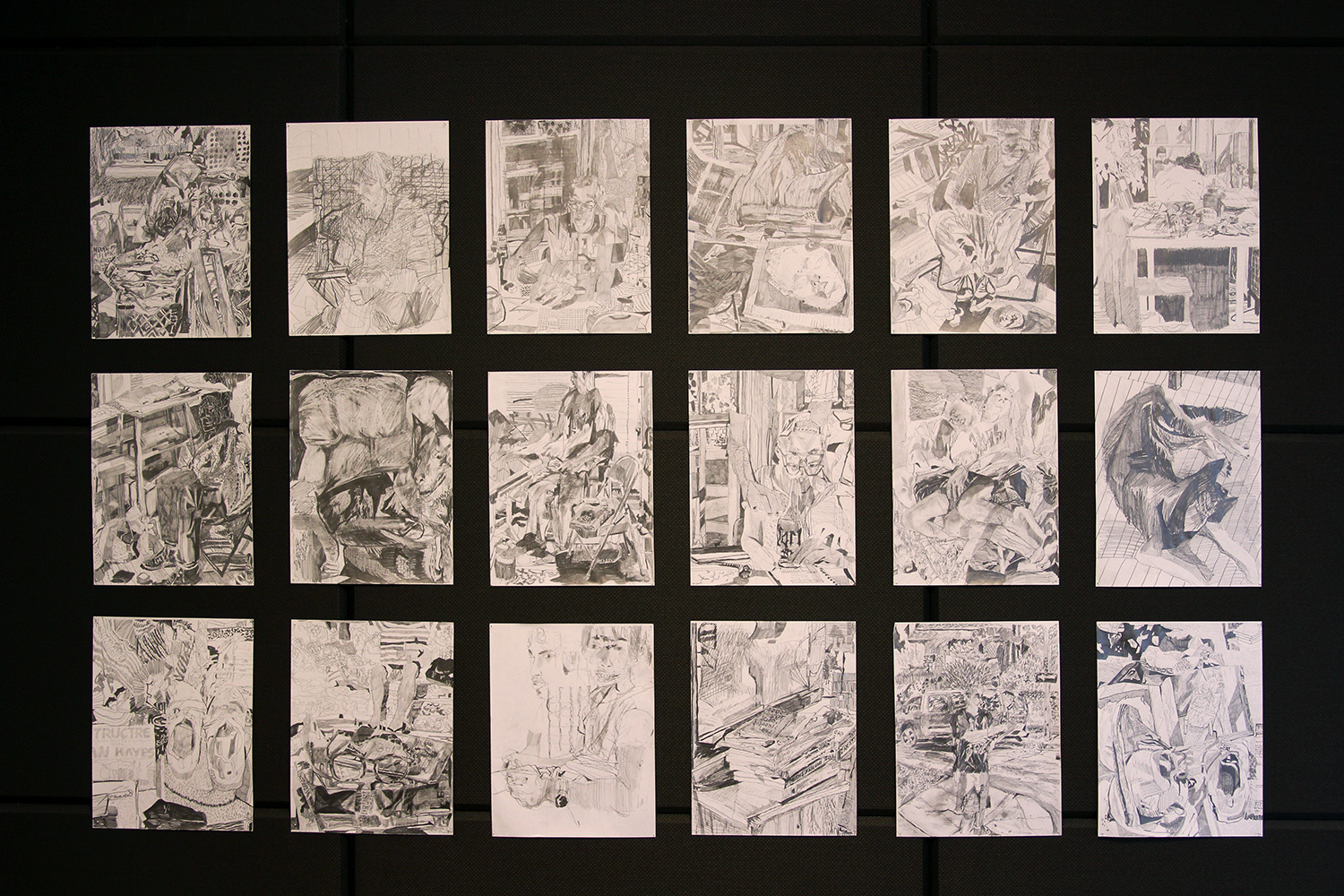 Is the drawing a plan and therefore does it constitute a finished thing? The process of simplifying adds to the intricacies of seeing. In both artists’ work drawings happen in numerous phases, our perception shifting to fit the dense information into the right  sheet of paper. The work has a tendency to reveal the ways in which one can see a pattern of moments/movements.

Again! But Not The Same merged similarities and repetition; as if by doing something repeatedly will lead to results that are somehow a more specific or resolved  — it is about seeing in stages. This exhibition was a synopsis of experiencing the inner workings of visualization, feeling your way through, and fudging the line between procedure and results.