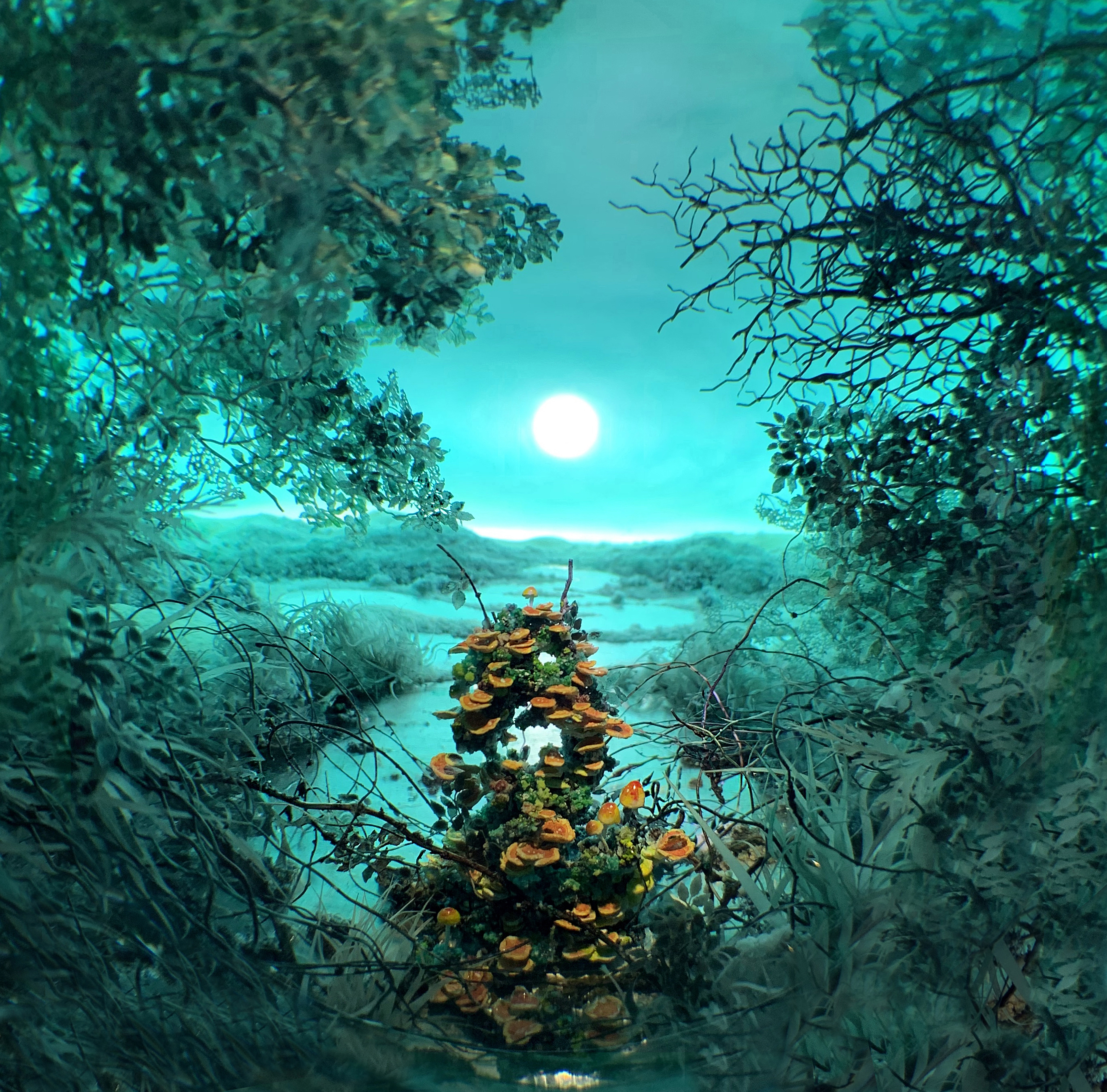 Patrick Jacobs’ work borders on the edge of fantasy and reality. Crafting dioramas that are rendered from a fixed point of view is his more recognizable medium, you would never know that his primary interest lies in lens-based media. The exhibition ​Nocturnes​ at the KCAI Crossroads Gallery: Center for Contemporary Practice greets you with a monolith of sorts: an unusual looking structure in which you enter an orifice feeds into the main space of the gallery. As you move through the space, you are guided into the side gallery using the predetermined exit point where viewers come into contact with Jacobs’ bronze-casted mud sculptures and 2D work. Feeling like a booger that’s been blown out into a kleenex, the space funneled me into the side gallery that contained mud sculptures casted in bronze and flat works from Jacobs. Radically different from his detailed installation, the sculptures resembled phallic shapes which are then reiterated on a smaller scale within the tableaus. The flat work on the walls was rendered in a primal manner, focusing on shape and form within their compositions and complimented the organic nature of the sculptures.

The wood that the structure was made out of was unfinished and organic, mimicking the raw nature of his mud sculptures. The structure felt intentionally temporary, like viewers were supposed to only be able to experience this for a specific increment of time. When I first entered the constructed room, the painted grey walls induced a feeling of claustrophobia that made me feel as though I was in a cave. This feeling was propelled by the dimmed overhead lighting, drawing my attention to the different sized illuminated circles that were spaced out in a vertical line moving across each wall. Possessing qualities similar to those of a skylight, the circles pulled me into the compositions that were found inside.

I felt like a voyeur witnessing a private moment that was never meant to be seen. After a while of peering into each hole and walking around the space, I started to feel uneasy and disassociated from the gallery space itself, eventually believing that we had actually been transported to a fictional world. The space felt void of purpose, and didn’t contain anything other than the viewing apparatuses that had been crafted to peer into the dioramas. The different sizes of circles were reminiscent of gloryholes and made it feel as though I was placed in the bathroom of an underground club in NYC. However, the carefully crafted dioramas revealed themselves in an orderly and linear fashion. The intimacy of these scenes forced you to get up close and inspect the small details of each composition, as though each one was its own looking glass into Wonderland and the viewer became Alice. The link between the phallic nature of the mud sculptures in the smaller gallery and the vacant room with an overabundance of holes created a witty dynamic that tied the work together.

Compositionally tight, each tableau scene included an overabundance of natural elements, including trees, shrubbery, mushrooms, and allusions to the sun. With the attention to detail demonstrated within the scenes, I could’ve been convinced that a 19th century realist painter was the mastermind behind them. The formal qualities of a painting were hyper-prevalent, so much so that I was looking for evidence of brushstrokes. Because of their sheer perfection, they felt fabricated. Tree branches were placed in exactly the correct places, mushrooms usually filled the foreground, and the placement of the horizon line gave Jacobs the ability to highlight some of these aspects by making them stand out against a stark white sky. The fantastical qualities of these works added to their illusion.

When I entered into the subsequent gallery, the reason for the separation of the other work from the installation became immediately clear to me. The mud and stick sculptures found on the pedestals sitting in the middle of the room possessed the raw and loose qualities that weren’t apparent within the installation. The mark of the hand became apparent in the phallic mud sculptures. The raunchy sexual innuendos of the sculptures made me think of the loose nature of graffiti and street art, as if Basquiat worked in sculpture. The natural elements are reinforced through the mud which was then casted in bronze, making a usually temporary structure permanent. I realized that the theme of perseverance and permanence of the natural world rang throughout the entire exhibition.

Jacobs’ installation mixed with his flat works and bronze casted sculptures spoke to the idea of temporality. With his highly constructed fantastical scenes, the viewer can only witness them to their full effect by standing in one particular spot in the structure. The intentional nature of these works were crafted to exist as they are in a specific span of time; after that time has passed, the illusion will be gone as they are deconstructed. This contrasted with the state of his bronze sculptures and flat works, which will continue to exist in the state they are in even after the conclusion of the exhibition. Jacobs cut no corners to make the viewer aware that they are experiencing a temporary illusion as they move throughout the space.