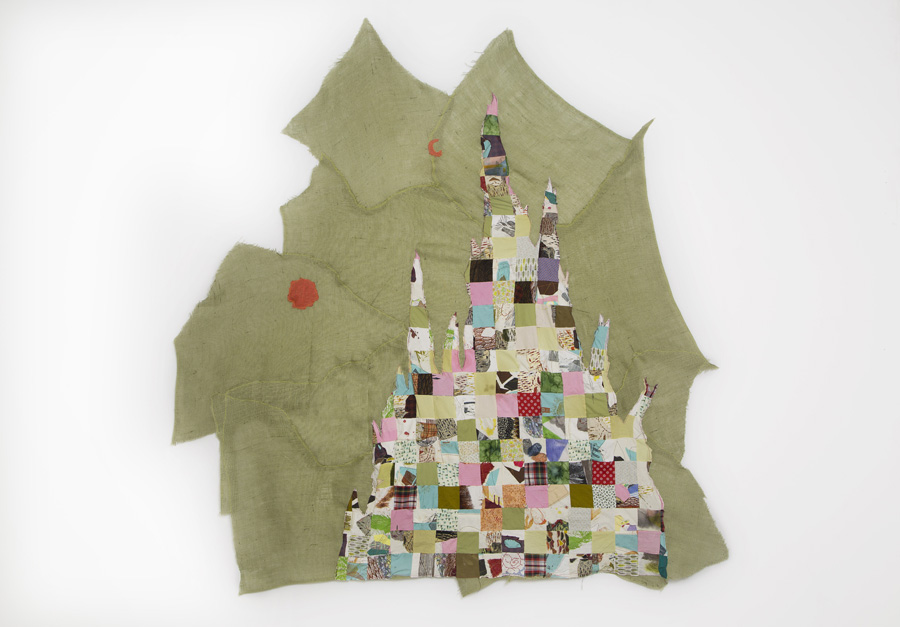 In 1992, a report was commissioned by the Sandia National Laboratories and the Department of Energy (DOE) in the United States. This report has a particular challenge: the DOE was developing a Waste Isolation Pilot Plant (WIPP), a location deep below the surface of the earth that would store the radioactive waste leftover from developing nuclear weapons for the cold war. Their challenge, and the reason for the report, was to highlight the danger of the site for 200,000 years into the future—the amount of time it would take the nuclear waste to become inert. They were planning for the fall of our civilization.

Although less than 250 years old, the United States government constructed and continues to uphold a narrative that this country is an enduring institution. In commissioning this report, the DOE was acknowledging an inevitable fall. They brought together an impressive interdisciplinary team that included linguists, anthropologists, architects, geologists, and engineers to answer the question: How do we communicate meaning in a time when language cannot be deciphered, when the Rosetta Stone of our era has yet to be discovered? We are curious beings. Even the curse of the pharaohs inscribed on the entrance of a tomb was not enough to keep explorers from opening it thousands of years later. How then could the DOE develop an appropriate marker for WIPP that could be read 200,000 years from now?

I wonder often about the motives of science fiction. Why is it that people wanted to escape into a fictitious future when there is so much to work through in the present. While we must plan for reality rather than envision a dystopian future, sometimes that reality requires us to imagine beyond what we know.

Mark Raymer’s artworks create a fantastical science-fiction future where “wildlings” (as the artist refers to them) scavenge the middens of a long gone society, one we might recognize as our own. These post-apocalyptic, intersexed humanoids have evolved as the children of men; their naked creativity is well suited to surviving in our wasteland, reusing satellites as indiscriminately as beer cans. His mountainscapes depicted in the pieced together fabric wall hangings are reminiscent of the concept art created for the WIPP report by architect Michael Brill: sharp stalagmite formations that protrude from the landscape with people wandering through them. The caption to one of Brill’s images: “We considered ourselves to be a powerful culture…. This place is not a place of honor…nothing is valued here.” What would these post-apocalyptic humanoids think of our world? With Raymer’s work, we get a glimpse into how they might react, what they might value, and the potential danger therein.

In exploring Raymer’s artworks, I begin to understand science fiction. Science fiction is a dark metaphor for our times, not escapism. His sculptural installations, prints, and fiber works explore the act of translation: both the translation from printmaker to fiber artist, and the translation of late-capitalist society to science-fiction future humanoids. Raymer’s work is ultimately about narrative, each piece building upon the next. The same fabrics and imagery are repeated, a detailed illustration of a beer can is used as a collage element in a wall hanging and developed into a larger than life soft sculpture made of cast off scraps of fabric. 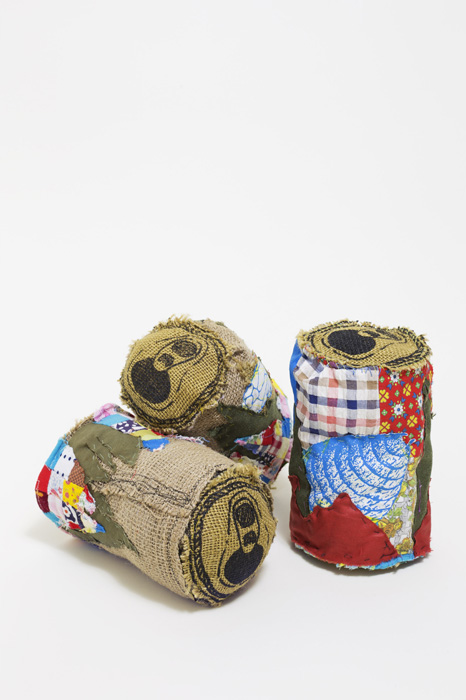 Raymer’s materiality performs the worldview of the narratives he has created, attempting to forget the meaning of found material he uses to construct the work. A burlap sack is used for its tactile qualities, but stripped of its class and labor material histories. Quilts are cut apart and collaged for their color palettes while attempting to ignore their gendered history. Detritus, and the cultural baggage that comes along with his chosen material, is decontextualized and expected to be experienced right alongside the preciousness of the printed image. The material construction of the works play out this desire: the prints are meticulous and detailed, where the fiber works are hacked together, appearing to be made with urgency. Yet, Raymer’s work misses a richness by not engaging with the cultural meaning of materials and their context. We only have to look to history to know there is risk in decontextualizing material—the risk of the pharaoh’s curse and the risk of WIPP.