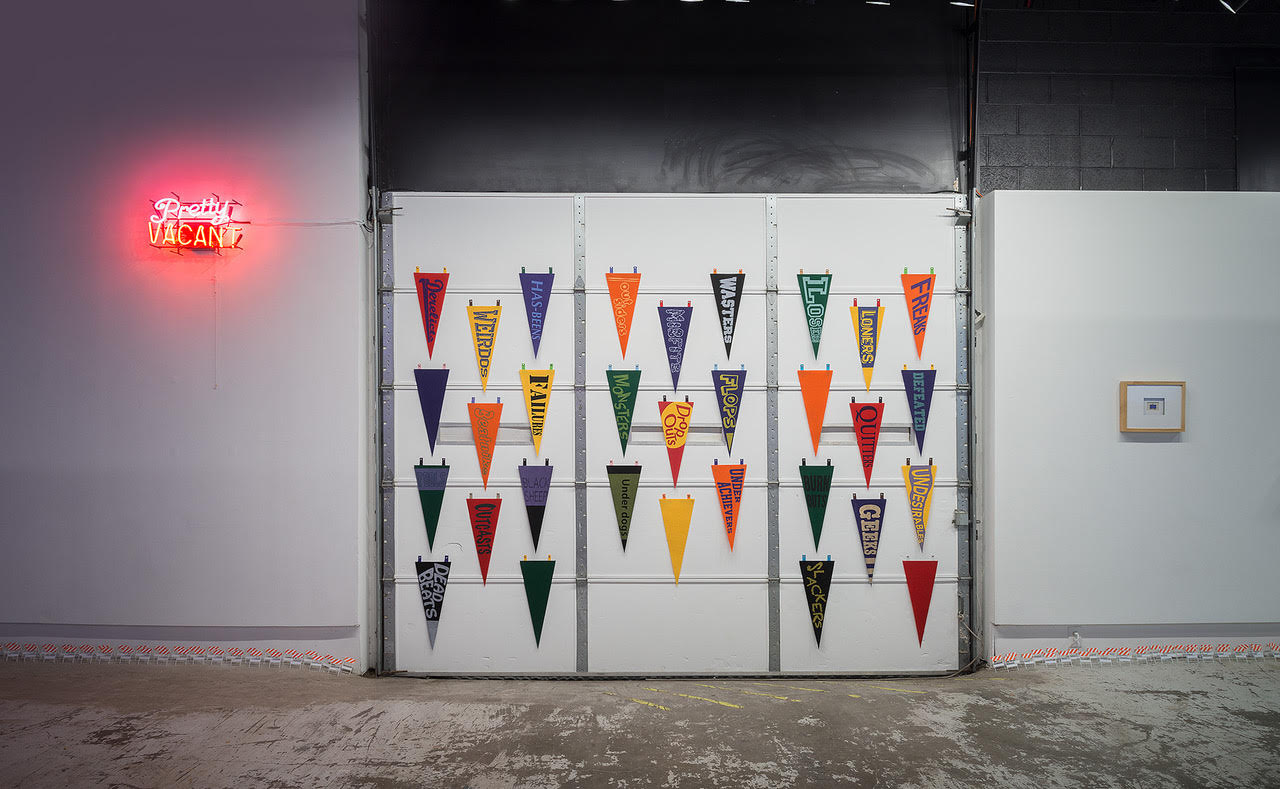 Modern day Dadaist Oli Watt is known for his comments on the current questioning many millennials have regarding the value of a college education by creating sculptural and 2D rendered parodies that criticize the establishment. In the exhibition Sensible Disobedience at Charlotte Street’s La Esquina Gallery (March 10th – April 22nd), Watt took a cynical stance on how accreditation and credentials are viewed in present day society by creating a facade that questions the contemporary system of academia. 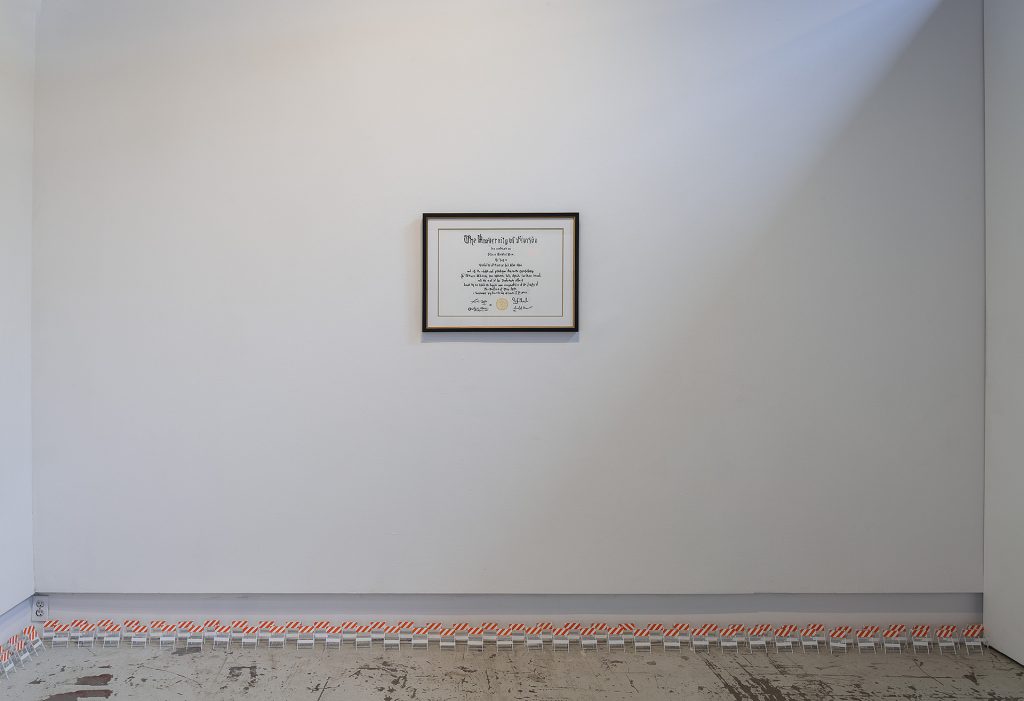 Watts’ cynicism is proven by the large number of millennials who come out of high school confused about their next decision. In 2017, we’re placing college graduates on a fictional pedestal, valuing them more than people in traditional work fields, such as manual labor.  With the diploma creating a class-based barrier, it makes it harder for people of lower economic status to obtain a degree, making it harder for them to obtain higher-paying jobs. According to the Idaho Department of Labor, the average cost of a bachelor’s degree in the United States is $127,000.  With a large number of people in the workforce having degrees, employers start looking past the degree for validation.  In making a fictitious diploma, Watt comments on the function of the authoritative document, making the viewer aware of its’ objective purpose, as well as the task given to this paper by society’s pre-conceived notion of importance.

Watts’ cartoon-like drawing used in Degree blurs the line between levity and seriousness. He recreates widely recognized forms of success and pokes fun at them, making audiences question why they are even considered measurable forms of success to begin with.  Dear Prudence is a series of traffic signs displayed throughout the gallery. Their unusual placement calls attention to their sheer quantity, starting a conversation about why we obey them in one setting and not another.  Watts shows interest in making people question whether or not they are handling his content as fictitious or subliminal in this work by using a common object such as a traffic barricade but shrinking it down to an unrealistic level where it doesn’t carry out its intended purpose, and instead functions as a guide for the viewers to move through the gallery.  The small replicas serve as a reminder of one instance where we face subordination to material objects on an everyday basis, and how objects possess a different kind of authority in their numbers.  The traffic signs shift viewers’ mindset from believing they are freely moving, independent beings before they come into the gallery into realizing that they have limitations imposed on them on a daily basis which had before been unknown to them. 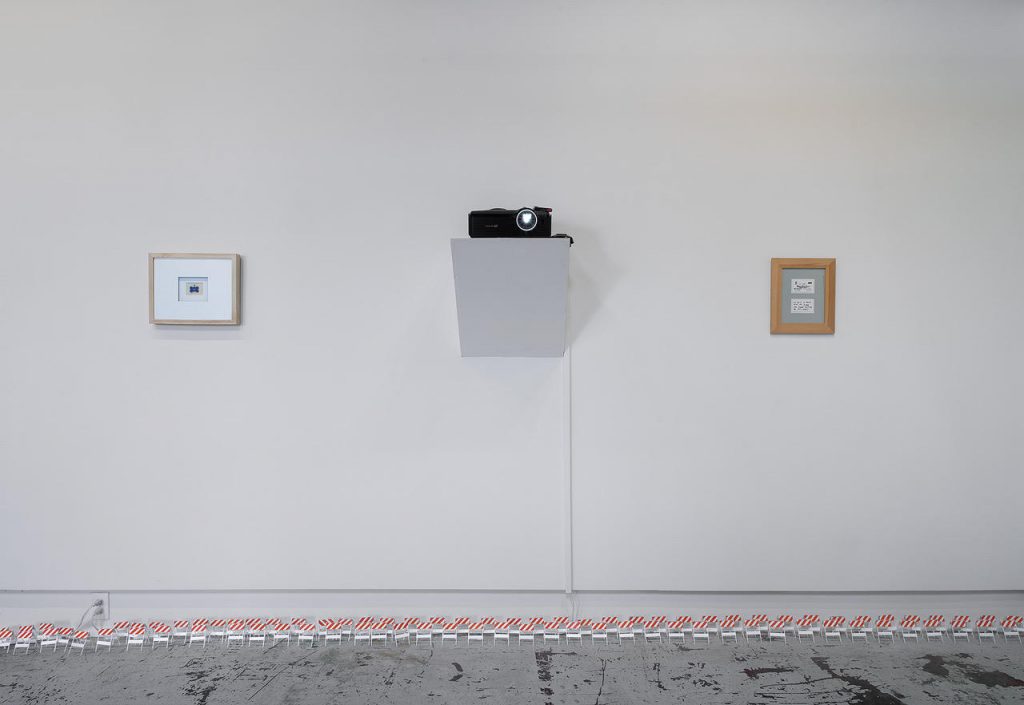 Watt’s work calls upon viewers to recognize that symbols that command us and present a layer of control over us in every aspect of society, but calls specific attention to education. His work questions the nature of why we choose to obey and honor material things for their symbolic aspects. Oli Watt draws out purpose from common objects and makes a viewer question why we choose to revolve our lives around something as ordinary as a piece of paper or an orange traffic barrier, and makes audiences question the authority that inanimate objects seem to possess over society.  A piece of paper should not dictate your success or function to further the wage gap between classes, as assigning this authority to a mundane object takes the power away from the recipient.  Placing this level of value in education creates distinct barriers between potential employers and people of lower classes who cannot afford a higher level education, despite their capacity for hard work and dedication.  Societal barriers are starting to become unnecessary due to the pace at which our culture is spiraling downwards. Because of this freefall, all that these barriers accomplish is further dividing the socio-economic classes, instead of being used to create friendly standards for competition in the work force.