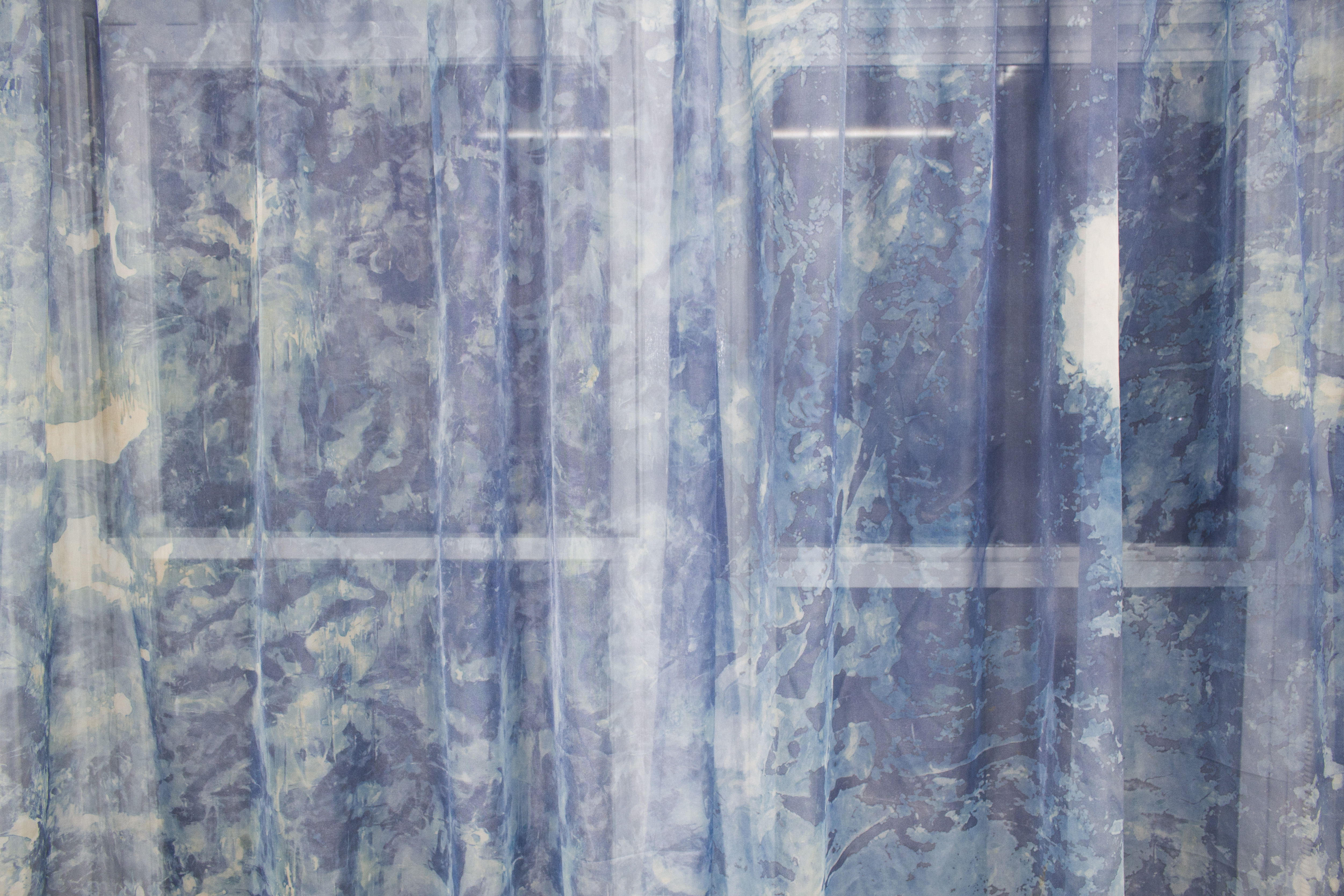 Remembering the Beginning: An Interview with 2007 Balquier

In May of this year, Kansas City based artist 2007 Balquier exhibited their work at LAND, a gallery located in a house in Northeast KC. I remember the night of the opening it was pouring rain, torrentially. I ran from my friends car into the gallery, becoming completely soaked, dripping into the gallery, and found myself still surrounded by water. Broad, cyanotype tapestries were installed throughout the stark white space. One on the floor in the center of the first room laid over a bed of rocks. Clunky, but small TVs were in both rooms of the house-gallery. The wind and rain animated the cyanotypes–the movement of one hung in the window out front was being streamed on a monitor leaning against the wall inside. As I left a trail of wet footprints behind me, I was beginning to understand these works as evidence; of performance, of time, and change. These questions I asked the artist reveal the beginning, and why it needs to be remembered.

Julia Monté: When I first saw this body of work, if you may consider it that, it was at Kansas City gallery, Vulpes Bastille, for Nos/Otras. The first thing I recognized was the use of “screens,” with TV monitors present, as well as the fabric, which presented itself like a screen for a projector, perhaps. What relationship do you draw between the two? Do you think about the recording of the surface of water in your cyanotypes as you do the actual recorded footage that exists on the screen?

2007 Balquier: (Eros)ion is a collection of work where each piece embodies a reflection of itself. The screens and the fabric pieces are interpretations of portals. The fabric pieces I tend to call portieres or curtains, having a root in the word “portal.” Together they present a question of time and place; often I make the two separately. In my video works included in the Vulpes show I document the flooding that occurred this year, spaces that I often visit become inaccessible due to the water’s change in depth. The curtains record the placement of mud, sand and silt after the water returns, leaving sandbars and clay. In a sense I think of these two mediums as vehicles for documentation of the Kaw and Missouri River bodies as physical and ephemeral forms. The video pieces tend to loop, when viewed through the fabric pieces, the eyes can only adjust to one surface. This replicates my thoughts on environmental collapse and the future and present consequences of flood planning in such a contested space where there once were tropical birds at Kaw point. When considering the video documentation, I attempt to capture an otherness to these spaces, some footage interprets these large ice “lily pads” as moving craters on the surface of another planet. I intend to question time and space with these images.

JM: There is a strong sense of dichotomy present in this work as well, that I think translates to your installation at LAND, where heavy objects – bulky TVs, rocks, and rods to weigh down the dyed tapestries – are adjacent to those light, sometimes creased, portieres. Not to mention, there are many ideas of labor as the dying, carrying of rocks, and shooting footage coalesce in your work and present different ideas of weight in the process of making. Would you say that weight consciously plays into the subject matter of your work?

2007: There is a weight present in these objects, the dichotomy between these materials, the riprap and curtains, represent the makeup of the river as body. In these “portals,” I wish for people to not only see the rivers but themselves. At LAND, one of the portals was propped up in front of an air vent, giving it the illusion of breath. The weight that I interpret in my work is interpreted in the psychological as well. The weight of loss comes over me in contemplating the states of engineering that have affected animal and plant populations as well as its impact on the relationship that indigenous communities had with the Rivers. The riprap is used as a division, a force to control the river body, a vehicle for control of access and rights of indigenous people. Engineered control of water resources for First Nations communities has consistently remained violent. I think of this violence when carrying the rip rap, I think of the lightness and power in the river when it floods, when there are moments where the riprap disappears underneath the water’s surface.

JM: I am new to LAND as a venue for exhibitions and I was curious if the name or mission of this gallery was aligned with your practice as an artist, just seeing how important land and more specifically water are to your work?

2007: When asked to exhibit at LAND, I thought the name and its relationship to my work was serendipitous. The front window of the house/gallery has the decal “LAND” on it, I took the liberty of covering it with one of the portals, imaging the space underwater. Kansas City is a watershed to these two large rivers, the Missouri being one of the largest. I often think of the conversations between friends that once the coasts flood Kansas City will be a safe epicenter, as if the impacts of environmental collapse do not affect us in the Midwest. The night of the opening I remember a tumultuous and violent storm, with cracking lightning, everyone gathered on the porch and the window’s ledge which I thought was appropriate; everyone was drenched!

JM: The unconventional venue I found really put your work into both a sterile and intimate place; LAND being the interior of a home, but lit with fluorescent lights with all white walls and white tile floor. How do you negotiate taking your work, which is very site specific and embedded in the land, and bring it into a new space like LAND (and Vulpes, too)?

JM: There is a lot of performance experienced in your works, though they are artifacts of an action in their own ways. Is performance an integral part of your execution or a process that drives this work? I am thinking about the unfolding of the narrative on the screen that reads at one point in the loop, “Will you remember the [beginning] for me?” coupled with the subtle movement of the cyanotypes, and the documentation of water on a moving screen happening simultaneously.

2007: I do consider a large part of my work as the performance of unseen labor, it is present throughout all aspects of our lives. The unseen or forgotten are present within my work, including the indigenous communities that have disappeared, and the affected plant and animal life due to river engineering. In this I ask visitors of my work to “please remember the beginning for me,” what was life like before colonization? Why does that matter? I think as a whole we must recognize the patterns and cycles of abuse of our past to move forward.

The presence of my performance, the unseen work of myself coating, and visiting Kaw Point, laying out these fabric pieces in the mud, carrying loads of rip rap from river to gallery, and spending time watching the water. They are all part of a hidden performance, what I leave behind is my labor, the labor of those before me.

JM: Thank you, 2007, for your responses and your work. There is something deeply powerful and poetic embedded in the results of your labor. I admired the experience of your exhibition and its clever title. We should consider the systems around us, where they began and how we affect them. I look forward to how your work continues to respond to time and the reaction it elicits from the viewer.