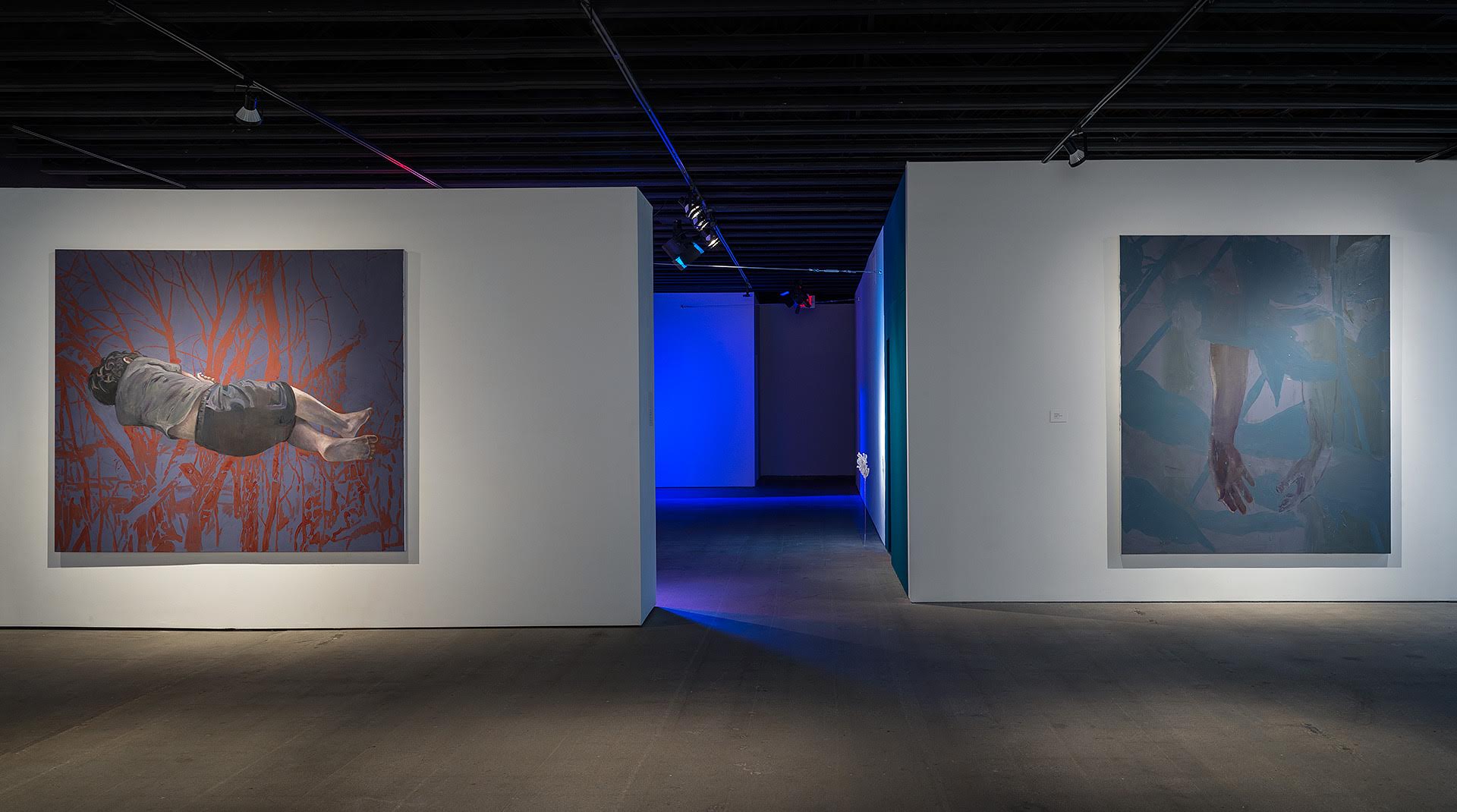 Shadows and Light in the Court of the Crimson King: Annual Charlotte Street Award Exhibition at H&R Block Artspace 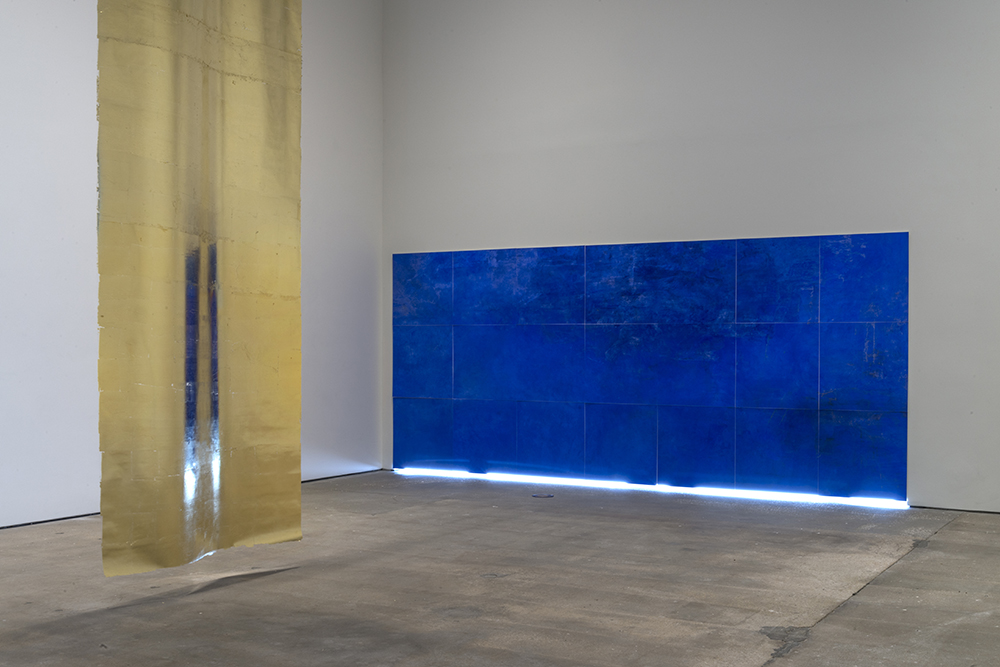 The perception of high emotional tension culminates into loneliness at Charlotte Street Foundations’ 2015 Visual Art Award Exhibition at H&R Block Artspace. After receiving an unrestricted $10,000 cash award, artists Jill Downen, Rashawn Griffin, and Misha Kligman present new work in response to these awards. With the precedent the awards set in the community, there seems to be a blind date aspect to everything here. When face to face with the work created, I am less affected with the works initial impressions. It appears Downen and Griffin are both making attempts at redrawing the boundaries of public space. The ways in which we maneuver around such work, if such work even has any affect on how we exist in its midst, or if we see them as curiosities to observe and dismiss. Kligman’s work presents us with different impressions.

To the uninitiated, the front room of H&R Block Artspace has a two-and-a-half story ceiling and most work in it takes on grand overtones. This is the setting for Downen’s Rejoinder, a tall gold-leafed curtain, that hangs gently swaying as people move around it. Its shimmer gives off the tonal qualities of flickering flame and even the parts where the gold seems to be flaking off allow quick moment of being able to see to the other side. Much like watching a fire and getting a brief glimpse of what is being consumed, yet the curtain’s size doesn’t do its detail justice. Instead it is lost in the chatter of the room and overpowers the scale of the other work in the space.

Downen explains Threshold – the work in this series – as the structural effects of lightning striking her home. I can see how the natural elements play into her work, those elements are few and far between here, especially when viewed without a crowd. This gold sheet sits flaccid; the flame has gone out, nothing is consumed. The water element of Membrane, Downen’s cobalt colored  tiles, are not much more than a backdrop. Its presence in the space is timid and if it is intended to act as a metaphor for water here then we are well and safe from ever getting wet by it. The perspective is more of an outlier, an element that has been tamed and controlled. 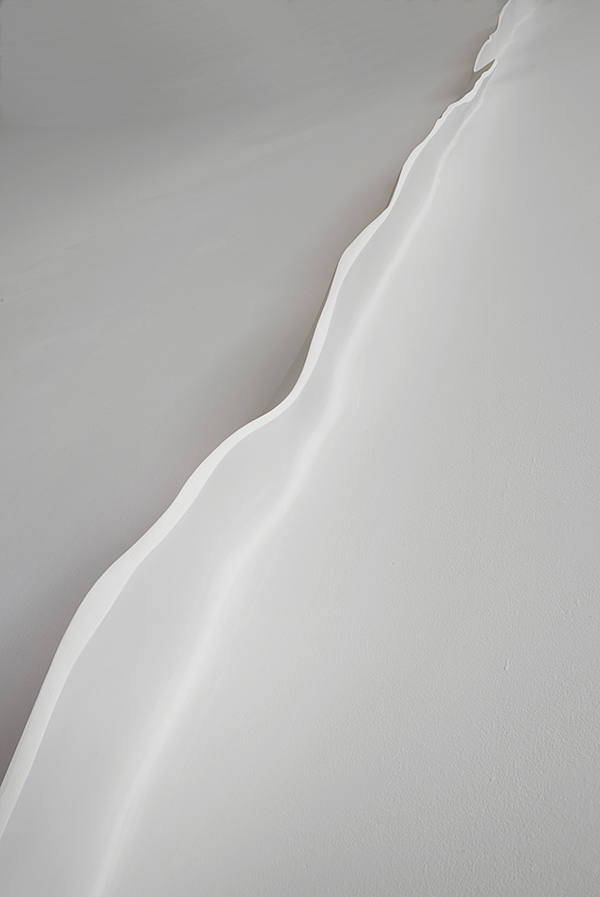 The most electrical component, and the most provocative of this trio, is Inscribe, a gently protruding plaster work. As a sculptor, Downen has the power to persuade her audience by stirring up feelings within a space by inserting structures of thought and meaning. I see that idea best invoked here. Its quiet existence is silent and altogether powerful, much like an electric current. But it’s silence is also something of a problem in that one almost happens upon it by accident, when it seems to be center of all that Downen describes. Her three works deserve a modicum of conversation, but they are almost too passive with each other to engender a deep emotional impact on the visitor. A simple reorganization of the room might invoke different feelings of space and empathy.

For Misha Kligman, softer hues and a more pastoral imagery are slowly replacing his past work that once depicted strong political assertions. Kligman’s technique is not to be ignored, he is a fine draftsman,  but I am not yet fully convinced of this color palette. This seems to be capturing a transitional period for his work different from his Spring 2015 solo show at the 1522 Saint Louis Gallery in Kansas City. He merged his earlier, more somber palette of greys, blacks and graphite with a stream of color that took us out of the shadows and into a brighter light. That show displayed how through color he is segueing into another realm of storytelling and I felt that was some of his best work to date. Remnants of the Russian diaspora, of which his previous work was so elegant and sophisticated, and spoke to a strong personal feeling of emigration, were still present, but began to look more hopeful. Looking at his newer work in the H&R Block Artspace, I see this as continued experimentation and is worthy of pursuit. This work is the right direction but there are wrong turns that need to be addressed. 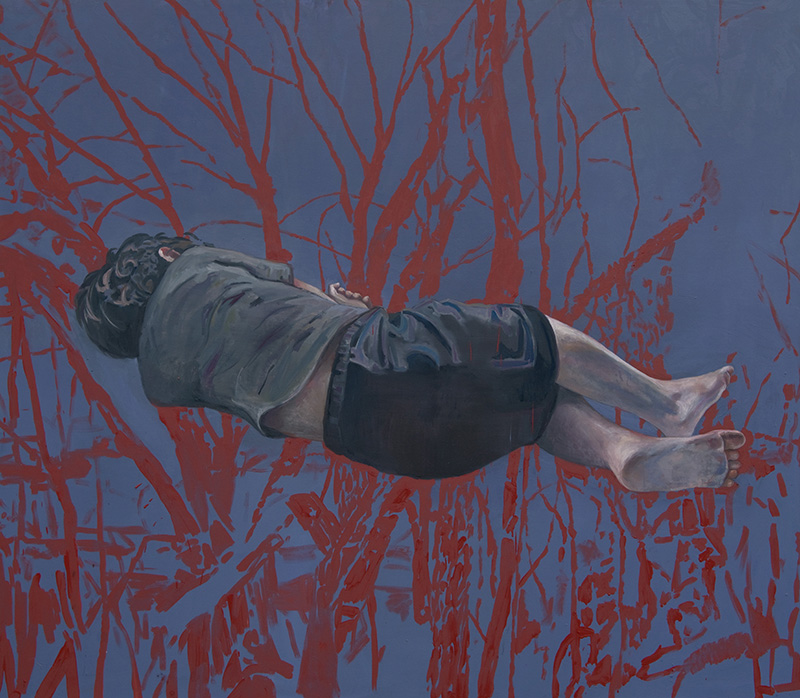 Grasp is one example of where the in-between changes are most obvious. The shorts of the reclining child are unfinished. Left without creases and therefore presents us without human movement, like an action figure no longer played with. Kligman’s usual attention to detail is lacking. Whereas he had previously taken us deeper and deeper into his mind of personal struggles and the trauma of history, I now a see a more comfortable stance in subject matter that perhaps tells us his personal traumas have been resolved. His landscape and portraits are happier and the jagged edge of past conversation is no longer present.

These particular figures and landscapes take on a more painterly gesture compared to past contributions that penetrate a personal history. Now, we see landscapes as the background. Perhaps this is Kilgman’s way of saying he has chosen to move past his own history and embrace the more comfortable aspects of his life. Any sense of emotional intensity is subdued with new color choices and presented on larger canvases that may take up space, but fail to impart a dialogue that ought to accompany it. There is little here that stands out as unique or intense. A sense of mortality and struggle has been replaced by sentimentality. 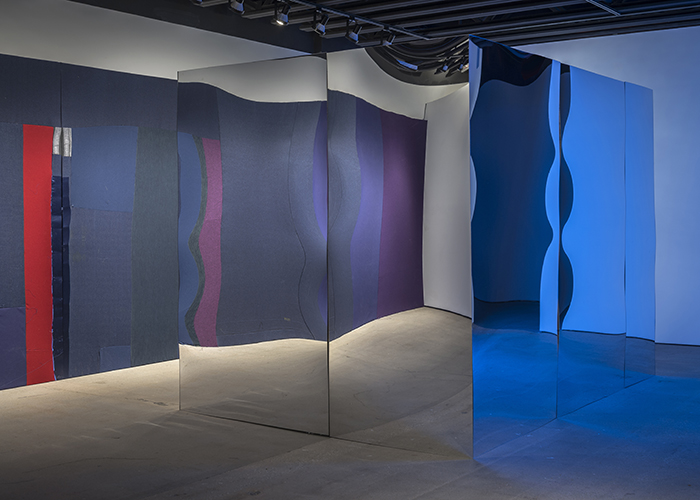 Perhaps there is some deeper academic prose in Rashawn Griffin’s work I am supposed to understand, but I find his work extremely difficult to navigate and thus, appreciate.  Sometimes the best intended ideas always have a key from which everything grows. No matter what is said, or how it is perceived, an underlying compass must be present and on Griffin’s conceptual map. That directional guide does not make itself known. When I walked into the space I expected to see the same openness of feeling and expression that I saw with Downen and Kligman, but that is not the case. This work is shut down and locked up.

The centerpiece of everything, Dimple, is a free-standing rectangular structure where the indifference with the quality of its creation is obvious. Little here has changed from past work; there is no story here that I can discern.  Looking closely, mirrors paneling the structure’s exterior skew our voyeuristic tendencies and one can imagine the countless selfies taken there. This is the beginning of what I see as sloppy, sometimes lazy, craftsmanship throughout.

Inside, the room is no more revealing than walking into a darkened closet; my sense of space is not altered as much as it simply feels clumsy. A dim blinking light at the bottom quadrant inside Dimple reveals little to conjure any sense of space. The feeling of being in an isolation tank is about as far as one can take this, without the quietude said tank provides. Another writer described his structures as feeling as one might inside of a sex club; but from experience, those encounters proffer a sense of danger and a groin-level charge that I have never gotten from Griffin’s spaces. These structures do not offer anything in the way of sexual excitement. They are dark, awkward spaces with no sensuality.

As I see Griffin’s work, there is a desire to impart some sort of chaos in the ways in which we commune with the space, on the other hand, this implied frenzy is betrayed by his embodiment of proportion and form. This makes the incessant broken angles and sloppy edges impossible to overlook.  The walls of fabric are mis-stitched, probably intentionally, but then one contends with the spare threads that were never snipped clean. I cannot trust that these choices are part of the intended artistic vision. The Plexiglass mirroring that covers the stand-alone installation are of varying heights that betray the controlled tightness I have seen with Griffin’s other box rooms. 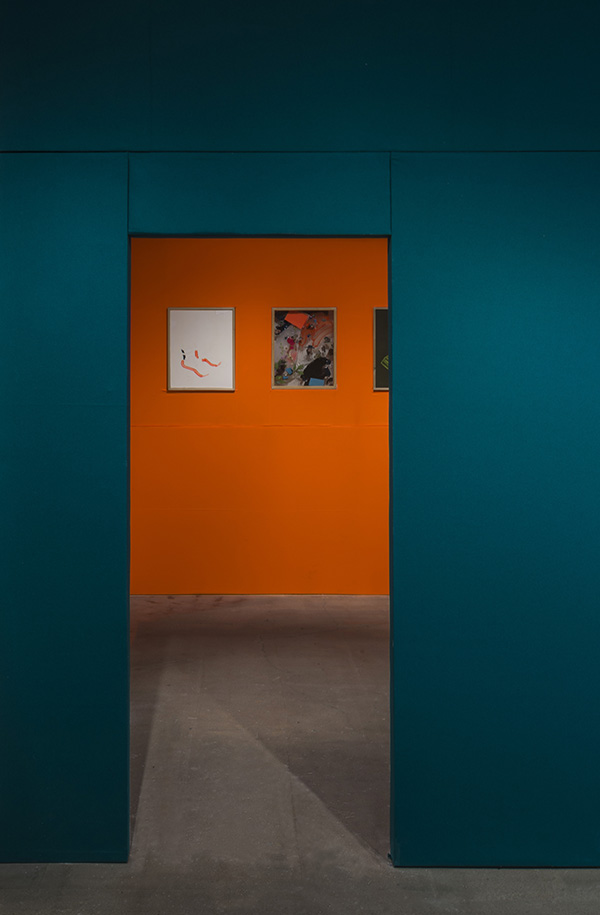 Untitled, the small orange anteroom is possibly the most bleak to observe. A readymade side gallery with little more to offer than jarring colors does not dissuade me from seeing – again – how hastily the fabric-covered walls are assembled. Inside are quickly rendered pieces that embody a sense that surface and concept are at war with one another. The overall look and feel is taciturn. As for the placement of fern-like flowers inserted into the floor in various places, it questions whether Griffin realizes just how cold and unfulfilled this work really is and needed to warm things up a bit, but they come across more as an afterthought and I have a hard time reconciling their existence.

On opening night fellow audience members filled the space with warmth and celebratory cheer. Observed interactions with the work showcased a sense of wonderment with the look and feel of everything. My concerns were confirmed after viewing the exhibition again on a quieter day. There is an overarching sense of coldness or detachment. The problem I have is this work is the set up itself, coming off the tail end of a large artist fellowship award, the work has a preset mode of operation to impress the local audience. Unfortunately due to what seems like awkward time constraints, many of the works come off with a lack of ecstasy. This is the date my college friends set me up on; high expectations, handsome from a distance, and all the right credentials. In visual conversation with this work my eye wanders, looking around for a better prospect. We are not a match. Overall, The Charlotte Street Foundations’ 2015 Visual Art Award Exhibition gives a lot of compelling surface impressions that do not unravel and become something more.