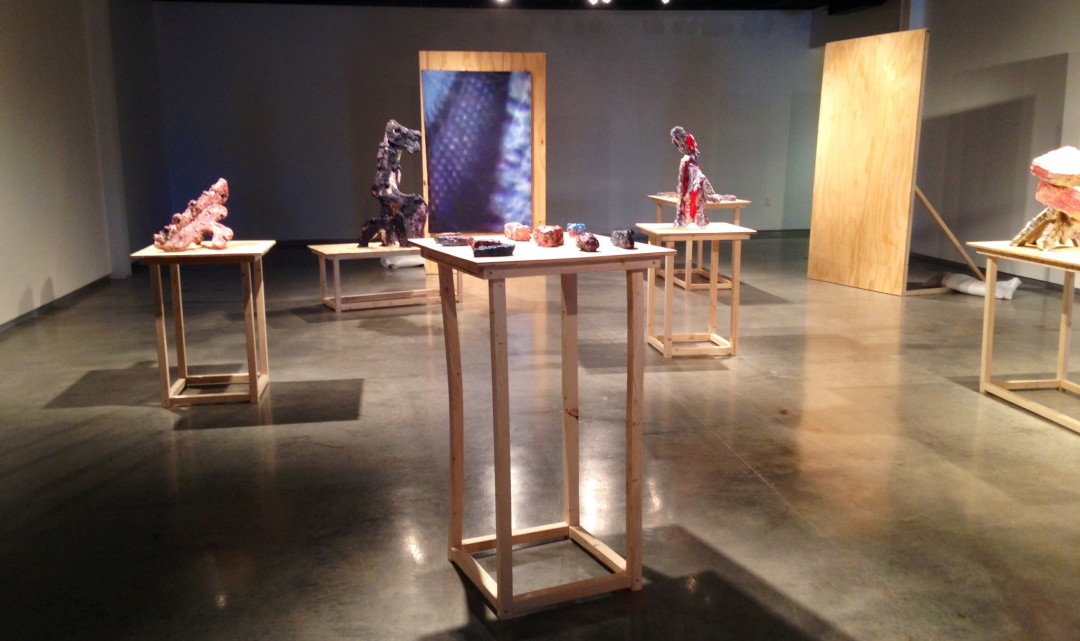 There was an air of optimism as I arrived at MCC Longview Cultural Arts Center to view ALL MET by Chris Daharsh. The stout rectangular building with a wall of windows welcomed the October sunshine. Inside, the gallery had been opened up to make room for a circular stage lined by three large structures resembling canvas stretcher bars. The two in the back of the gallery were faced with plywood to create a solid surface, while the one in front of the entrance was only half enclosed to create a viewfinder for the exhibition behind it. The back left stretcher, and the solid half of the front stretcher had vinyl prints mounted to them. Within the constraints of the ring stood four statuesque performers displayed on low lying pedestals, their props nearby on two taller platforms. The players are seen gesturing their lines within a silent, fleeting world. The ethereal atmosphere I felt before walking into the gallery was shattered by the bizarreness of each form exposed by overly warm spotlights. 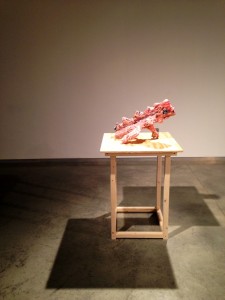 At first I was solely interested in the materials, studying each object trying to parse out how such a brightly colored blob of what looked like expanding foam sealant and plaster could adhere together. The simple frame pedestals displaying the props, or colored stone like formations, were at such a height that the objects transformed into artifacts familiar in shape, yet part of a seemingly forgotten history. The curation was intentional to keep the viewer within its ring, scrutinizing each object in a museological fashion. It was when I took a step back, aligning myself with the stretcher to the far right, I began to draw links from indonesian shadow puppets in which the abstracted, almost primitive compositions revealed themselves. An outstretched pink form with spikes protruding from one side resembled an iguana. The central figure, the lead role, took on the caricature of a Chinese Empress in full regalia, red packing tape and all. Even the mounted prints on vinyl, that shared the same colors of the artifacts, became a proxy for what would define place or environment in a theatre set.  Each character beautiful, provisional, and isolated began to weave an intricate narrative between painting and theatre. 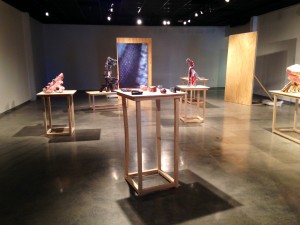 Returning to the front of the gallery, the half covered stretcher as a viewfinder offered a limited perspective of the exhibition where the viewer is unsure what they are walking into comparable to the opening night of a play. The tall angular figure (Proto) I thought to be a bear, now doubled as a gargoyle. The subjective image each statue depicted had surpassed the materiality of the sculpture. There was sense of playfulness and imagination to the point where I could no longer ignore that I too had mounted the stage to perform. ALL MET is a reminder that when experiencing any work of art the viewer is performing the script the artist has written through composition, color and material. However, the conclusion of ALL MET is open to interpretation as narrative is constructed by the movement between and around the pedestals. ALL MET not only reiterates the link between painting and theatre, but also revitalizes the necessity of imagination.