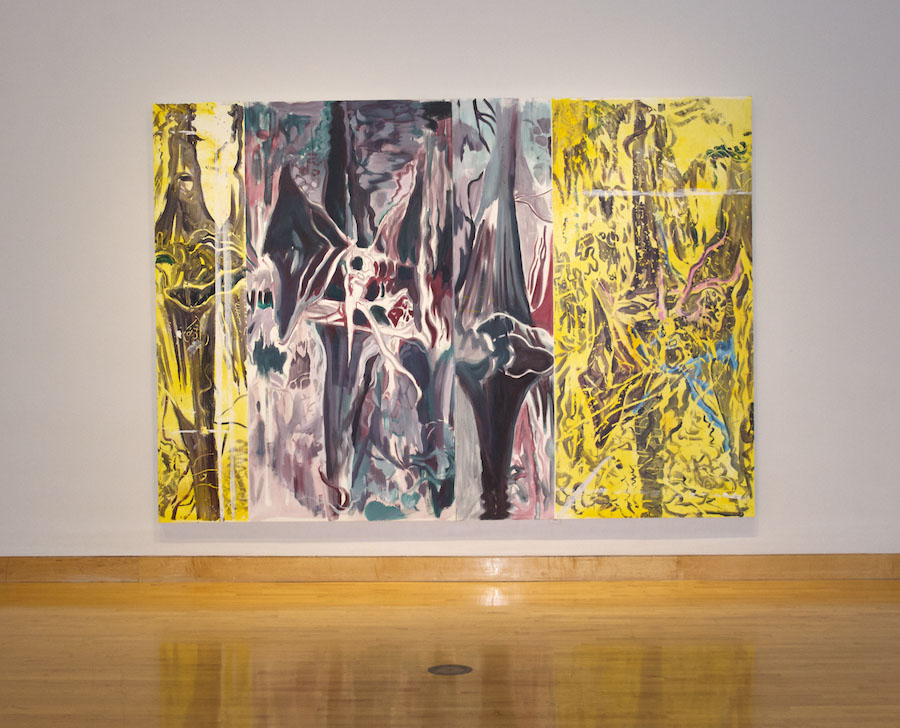 Teetering on the knife edge of our ecosystem’s collapse, there is a slow-churning sensuality in There/Then, Travis Pratt’s new paintings at Greenlease Gallery  Are we through anticipating and ready to take honest stock of our environmental situation or will we remain ignorant to this plight? This is a deeper question to ponder. For right now, Travis Pratt is documenting how and where the effects of globalization and climate change are making itself known. Clues, traces and footprints of what is now at the ecological fore have been present for years. Pratt does not over dramatize nor does he minimize his impressions. They are straightforward, giving his audience a chance to see up close for themselves how the ancillary and tertiary effects of global warming are perceived. 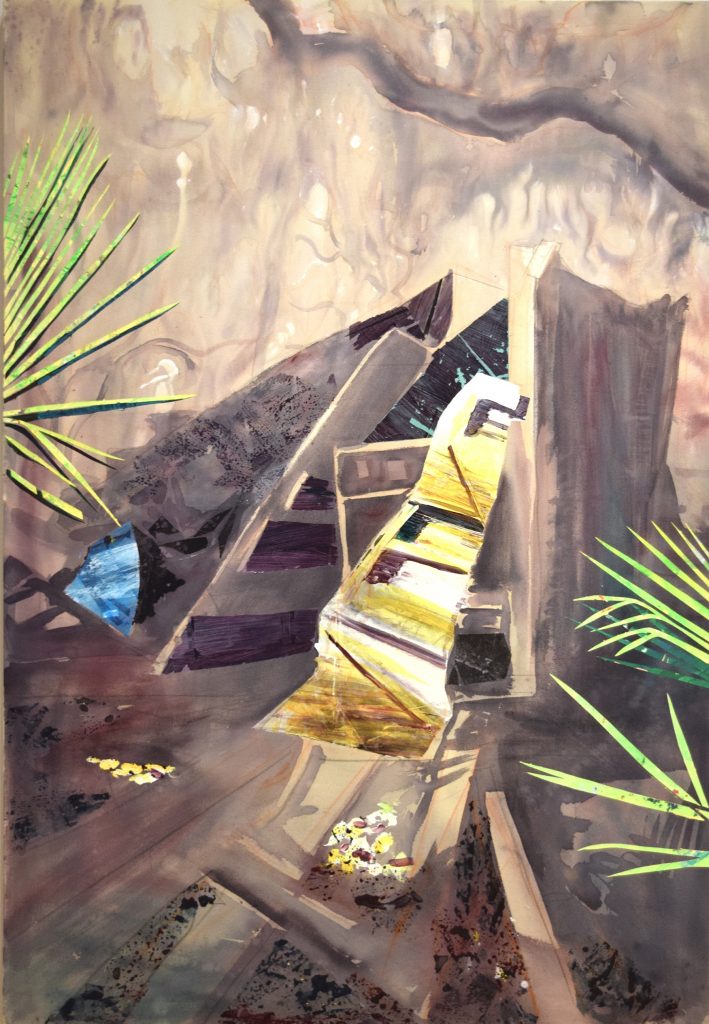 Shack by Travis Pratt (Image courtesy of the artist)

Pratt initiated this conversation with The Joplin Paintings (Parts I and II) and this body of work continues the discussion. One can deny that something is happening to our environment if their belief system excludes the reality.  Is it willful ignorance or propositional knowledge? Each series of work espouses, whether intentionally or not, America as a decaying empire. Our carbon footprint is already manipulating nature’s Master Plan. Couple this with an incoming administration that considers global warming a fantasy and only then might we finally comprehend our limited choices.

There/Then culminates a six-week visit to Deep Creek off St. John’s River in Geneva, Florida, north of the Everglades, Pratt unintentionally approaches our ruin as a feeling of exhausted debauchery seen in long, swooping brushstrokes that dominate the canvas, sucking up all the oxygen in the room. It’s sensuous with a maw that is a bit used up, Not unlike the Everglades, or any wilderness, a fear of the unknown is instilled where one is curious, but trepidacious, before taking a first step inside. Still, it’s a place I wouldn’t mind spending an hour or two. 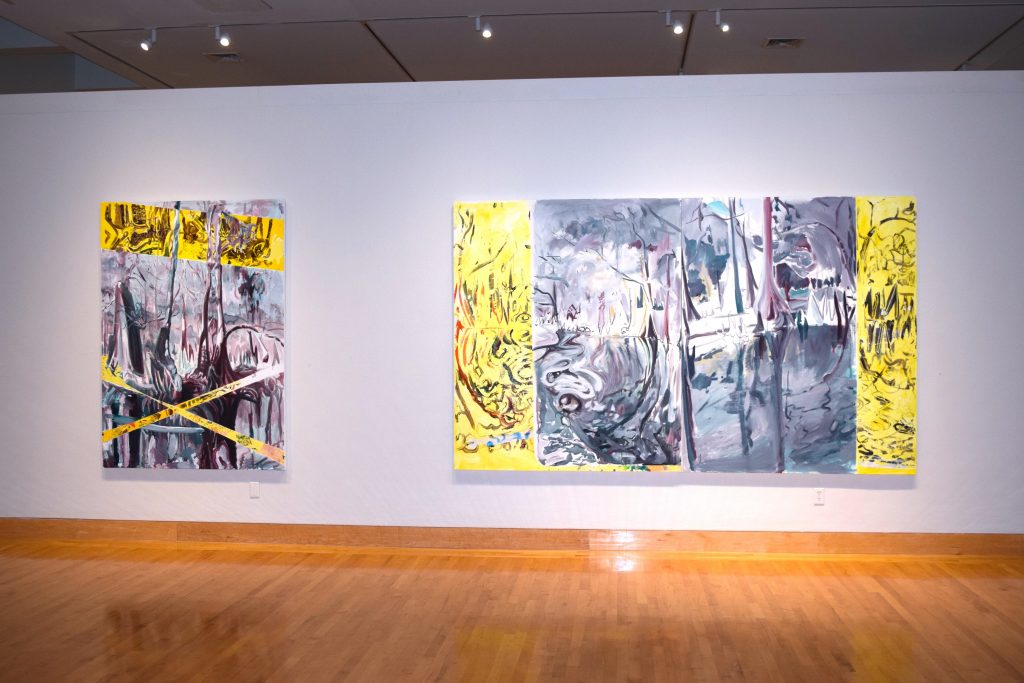 Consider Caution as a detail for the larger tableau of Deep Creek, insomuch the mark-making in each bears similarities. The more I think about the way Pratt gives us color the less my insistence of the acid yellow strikethroughs were phosphorous fog from the Everglades and think instead of something closer to radiation.  It is keeping more in line with the void presented here; somewhat unearthly, or worse still, of a post-apocalyptic surface. Perspective changes in the heavy Florida heat and it becomes a battle to see your way through the sultry stickiness. Decisions are made stemming from how quickly one can get back to the shade. But in an ecosystem that goes from beach-like to swampy, one never truly disengages from the reality of warmth. A root system is shown here, tied precariously to the rising waters of the Everglades, illuminates how the local ecosystem is destroying vast land masses. This is related to the exact problem of rising tides faced by the state of Florida itself. Pratt captures elements that aren’t necessarily the most provocative; they are an ordinariness of dying pastorals and therein lies the full impact of this series.

The thing that Travis Pratt does so well is convey a sense of time through the flatness of his paintings. Each one is a perfectly contained record of time. Although impossible to fully discern, the first marks exist with the last marks. Wheels takes us in different directions while the truck remains grounded and the stroller floats off on its own. There’s a myriad of symbols here; the ethereal gravity of fatherhood while the drudgery of everyday living forces our feet (or wheels) on the ground.  Here too, are the effects of globalization and its adverse effects not only on the population, but the psyche as well. The Everglades, and specifically quiet enclaves when extended families can raise their clans without outside influence, are seen in their twilight moment of existence.

Wheels by Travis Pratt (Image courtesy of the artist)

Stop!  Let’s take this out for another spin and consider a different outcome. A long time is being spent envisioning “the forthcoming ‘breakdown of nature’”. What about the alternative; that we don’t go out with a bang but a whimper? Modest change, fashioned incrementally, is a stronger survival tactic and it’s an opportunity to forego, or at least acknowledge and understand the forces of eventuality are stronger than us. Therein lies the real seductive force; allowing change to occur. Pratt is portraying the slow movement of inevitability; a whimpering debtor rather than a gulping bankrupt. Pratt is a documentarian about the end of a life we assumed, or hoped, would last forever. And you can see how that’s not feasible or sound thinking. Even if we screwed up this planet, it isn’t permanently rendered fallow. We can prefer to think of this as preparing for the next wave of caretakers. Let’s hope they do things differently.