The Healthcare Paradox, as Seen Through ‘Care, A Performance’ at La Esquina

The concept of ‘healthy’ contains a multitude of definitions; asking how human society defines the tools of normalcy for our physical and mental states. Pain is an individual sensation, but its resulting effects are felt by all. We see in this exhibition that one’s mobility, disability, debility, illness and institutional access are social. Returning to “normal” is a paradox as the very idea of wellness is reconsidered. 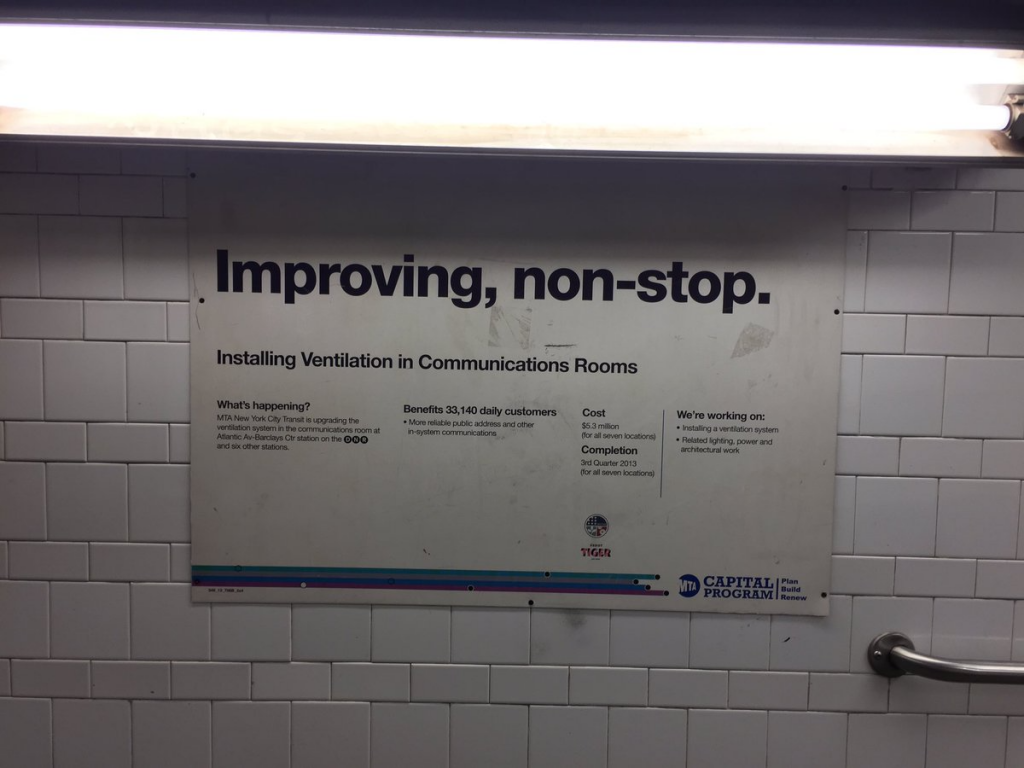 The state of American healthcare is a series of negotiations and consolations. This exhibition put a human face on what healthcare does for a population; standing in opposition to the current administration. Their obsession with undoing an already existing system without reasonable replacement brings up the human and psychological necessity for human empathy and care.  The healthcare industry’s bottom line mentality concerning wellness doesn’t always jibe with the societal effects. It’s begs the question: ‘How much are we willing to spend on one another?’

At first look, the space was the standard curation of objects and materials; there really wasn’t any central focus on one piece or another. Who suffers more isn’t the right question to ask; pain doesn’t necessarily have a hierarchy. Eyes pitched towards the artists’ construction of new interfaces to existing ideas.  Negotiating a world that demands one-size-fits-all policies requires invention. 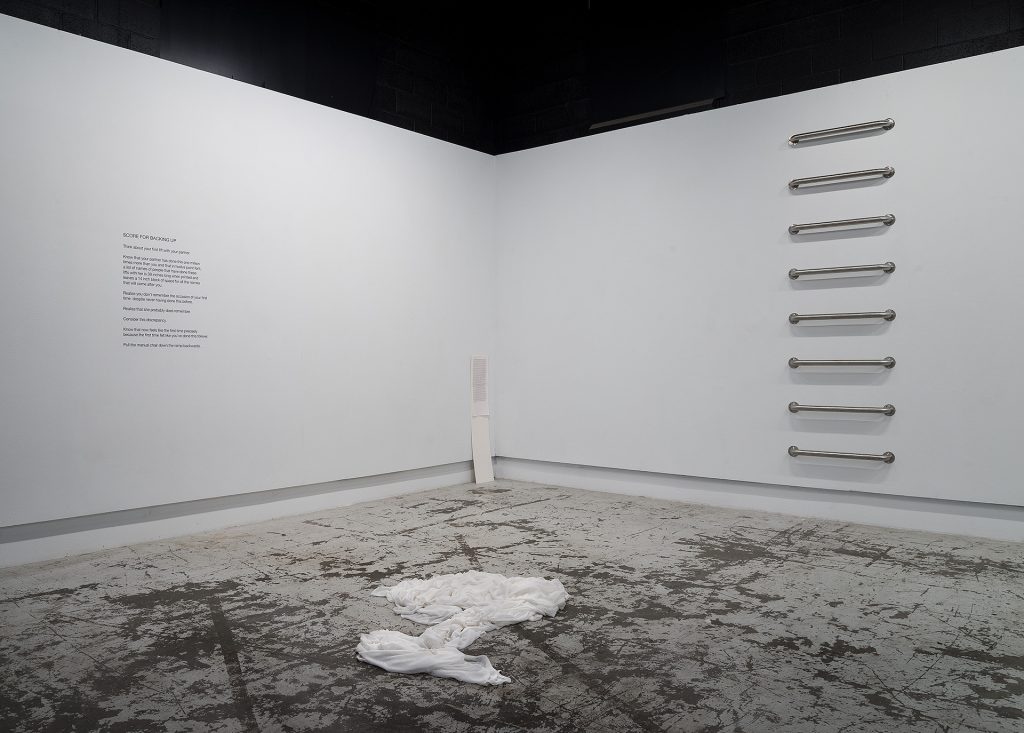 If there is a takeaway to be understood, it is the human capacity for adaptation. Amongst the Donald Judd-esque bathroom handrails (Constantina Zavitsanos), seeing eye canes (Carmen Papalia), hospital gowns (Hadley Clark) and care instructions (Lynne McCabe), were the aesthetics of human care and its evolution. In a sense, this room was a survival guide. Appropriately so, as there are larger issues at work; these objects of adaptation also prescribe the advancement of the human species.  Now that citizens of Earth have been handed a timetable, the effort to make ourselves into the next form that adapts towards overpopulation, conflict (political, social) and climate change, it is necessary to begin thinking about how the human form will continue to augment itself.

Ben Gould’s live performance, In Ballast, reflecting his experience with Tourette’s Syndrome, was by far the most powerful. It went directly to the core of living with difference. I was more interested in his balletic movement and whether or not he was going to be able to hold the water poured into his cupped hands (He did!).  In the spirit of Eva Hesse, it is important the viewer not “Ask what the work is. Rather, see what the work does.”  We witnessed his experience in stark reality, not perceived in the abstract, which highlighted to the audience that we have been invited to watch as both architect and observer. Do we sympathize or empathize? Our emotions must mitigate the experience to reach a pragmatic extension of Gould’s motions, acknowledging these specific limitations  tell us the limit does not exist.  Rather than focusing on otherness Gould says, “Instead of my spasms being like an engine stalling, they have become an engine.” And thus, is the evolution of humankind’s leap into the future. 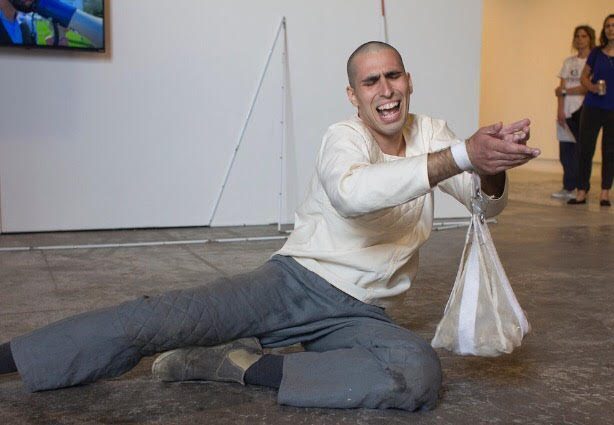 Photos of implants after the body has been cremated (Sarah Sudhoff, Precious Metal) gave thought to what this might look historically. Before I read the wall text, I assumed they were ancient objects and considered part of a dialogue on  how we’ve always cared for and about the infirm. But the afterlife of prosthetics and augmentations take different routes after death, so Sudhoff’s documentation became a conversation about the rejuvenation and conservation of these artificial elements. 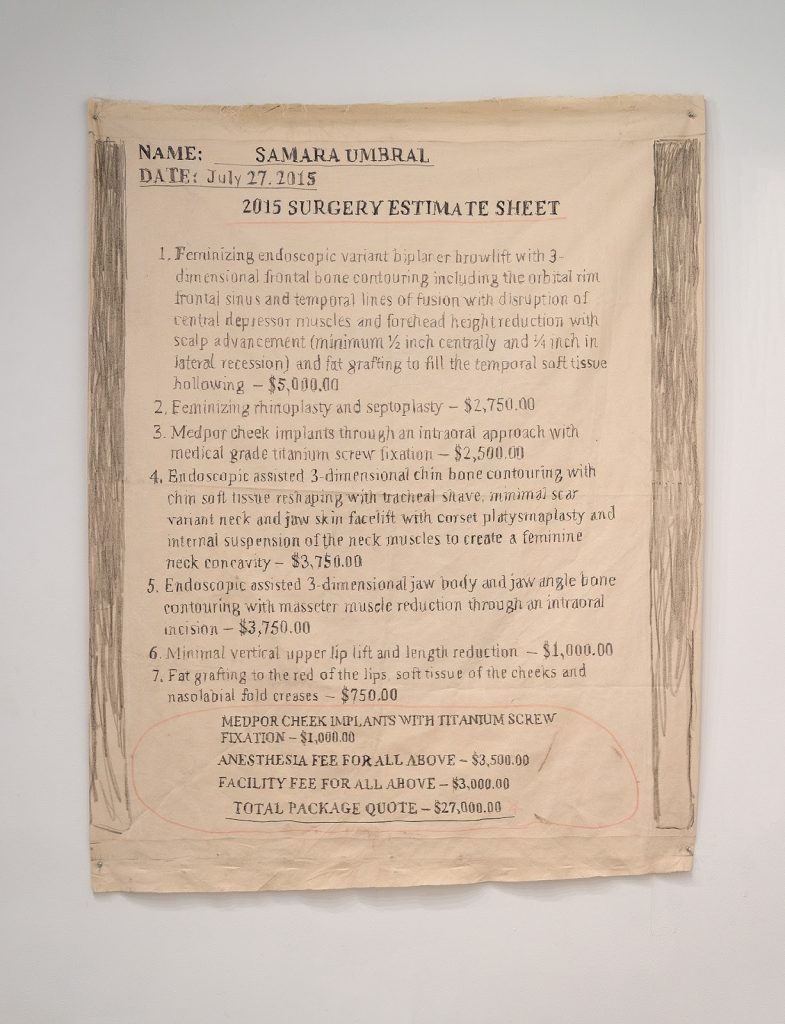 Conversely, the cost of living as yourself (Samara Umbral, Face), put into motion the idea that the human figure does evolve and change according to its personal user interface.  Curiously, it leaves us to wonder what happens should this particular body be cremated after death and what comes of all the secondary and tertiary implants when melted down? Umbral presented a banner highlighting the monetary expense of personal evolution, but it is difficult to discern what else is seen beyond that.  It doesn’t answer whether all these estimates were undertaken or how Umbral felt about the results. It is little more than a bleak shopping list that seems to skim past the psychological considerations of such measured steps.  Face does present a triumph of science that such progress can keep up with the human need for ‘wellness.’ Fitting into a society comprising itself out of matching one’s psychological foundation to these artificial gender binaries with its physical manifestation.

It is not merely enough to be physically on board insomuch as it is to be in sync psychologically as well. There is no such thing as a normal, as we continue to fight for the rights for those with needs, CARE presented this truth. We negotiate trust as a means of survival and the instinct for personal strength, with the capacity for acknowledging society’s needs, is stronger than ever.