The “Hole” Between Artifact and Viewer 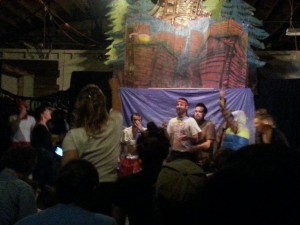 A few weeks ago, I had lunch with local artist Judith Levy. Having freshly come back from the east coast (her- a residency at Art Omi; and myself- showing curated work in New England), Levy asked me “what is the most interesting art you have seen in Kansas City?” I immediately responded with “Mel’s Hole.” While the play wasn’t shown at the typical alternative-theatre venues, or in the crossroads (Shown at Hoop Dog Studios), I found the project rich in multiple artistic and aesthetic histories; recalling various theatrical types, which, in turn, enabled a unique development of creative live exploration that, for me, rendered itself far more interesting than most work I have seen recently.

Mel’s Hole is a collaborative project, which fully materialized through a collective process, as cast members and musicians performed during a weekend-long production at the beginning of August. The play, loosely based off of a phone call in 1997 from a man named Mel Waters on the radio program Coast to Coast A.M. with Art Bell, was a combination of Brechtian theatre, Hedwig, fantasy, slapstick, and sincerity. The play envisions life outside and inside the “hole,” while government agents function as the antagonists to Mel. The characters inside the hole are fragments and collections of objects thrown into the hole over the years, and when one of them, a seal played by Flora Mahaffy, “crosses over” – complications ensue among the creatures’ interpersonal relationships, finally culminating in a comedic, dramatic decision by Mel. 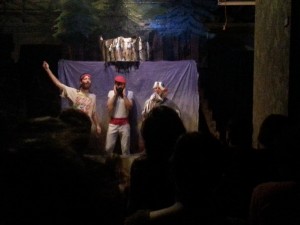 The overall composition embraced multi-layered artistic strategies that could be appealing to families as well as contemporary Brecht-seekers, such as myself. While I don’t always agree with the idea that aesthetic content ought to be “available” to families as well as critics, Mel’s Hole showcased a capacity to embody an enrapturing experience for the viewer, without over-saturation to a point of rendering the viewer numb. This experience was made possible through a musical exposing its workings rather than working toward mindless, glossy consumerism. While costumes were vibrant and riveting, each costume erred on the side of gaudy, instead of opulent, that revealed physical visual work done by actors instead of the aristocracy. However, to say it was charming would be to, in my opinion, belittle the production. Instead, it was funny, warm, and inclusive. While still located within the proscenium arch, Mel’s Hole retained an ability to reach out to viewers, to develop a third space between stage and audience. And, while arguably, this third space is achieved anytime a live or aesthetic work is produced; sometimes this space is more developed, more nuanced than others. It is through this collective energy that I found homage to Brecht, to a kind of theatrical and artistic space that asks the audience to think, though not through ostentatious visual and physical means.

Having seen several Brecht productions, both at the college and professional level, I do not believe I have witnessed a particular core of what Brechtian theatre gave contemporary art: the meta-space as a space of criticality, momentum and productivity. Often, Brecht theatre undergoes the same slick treatment as other types of productions. (For example, in an “experimental” production ofThe Jungle in Boston, 2011, the set design remained new, calculated, and austere.) The meta-space that Brecht pushed in his writings and plays functioned as a location for critical dialogue to occur. With the meta-space/text/feeling/affect, the audience could develop a type of cognitivedissonance with the aesthetic material in front of them. Through this dissonance, the audience may generate a more critical eye by which to examine other types of social, cultural, and political spaces, ultimately leading to changes in society. Whether or not his goals and ideas found fruition is up for debate; however, Brechtian meta-space has provided a frame and fuel by which one may generate and unpack artwork. The Brechtain lens provides particularized strategies, which have the potential to engender moments of (in his understanding, politically-charged) consumptive clarity for the viewer. 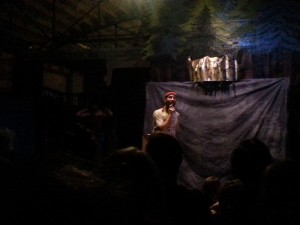 This aesthetic produces acting techniques that simultaneously showcase the character portrayed and actor playing the character, costume and set design that reveals its own generative process, and music as a dismantling force within the Diegesis. In art, we see these strategies through tongue-in-cheek art historical reference, satire, and viewer acknowledgement. Visual composition, aesthetic technique, audience participation, and materiality are all ways in which the meta-space/third space of the Brechtain form is rendered. It is here I find overlap between live and mediated artwork. Mel’s Hole was, in my opinion, both an incredible piece of theatre as well as fine art.Additionally the play succeeded as public comedy, physical theatre, performance art, dance, and music. Clever, curious, bizarre – but never pretentious –Mel’s Hole occupied a rare space among contemporary culture.

During intermission, while speaking to other audience members, weall felt immensely motivated to create. Yet, not in a way that emerged from a sense of lack: one’s own personal production, of textbook knowledge, of talent, etc.; but from a motivation possessed through a collective understanding that creative work can happen, and that there is a space, place, and community in which the work may happen. In Kansas City, and elsewhere I imagine, this type and quality of motivation is exceptional. This resulting affect, for me, absolutely positions Mel’s Hole as one of the more interesting events I have experienced in Kansas City.