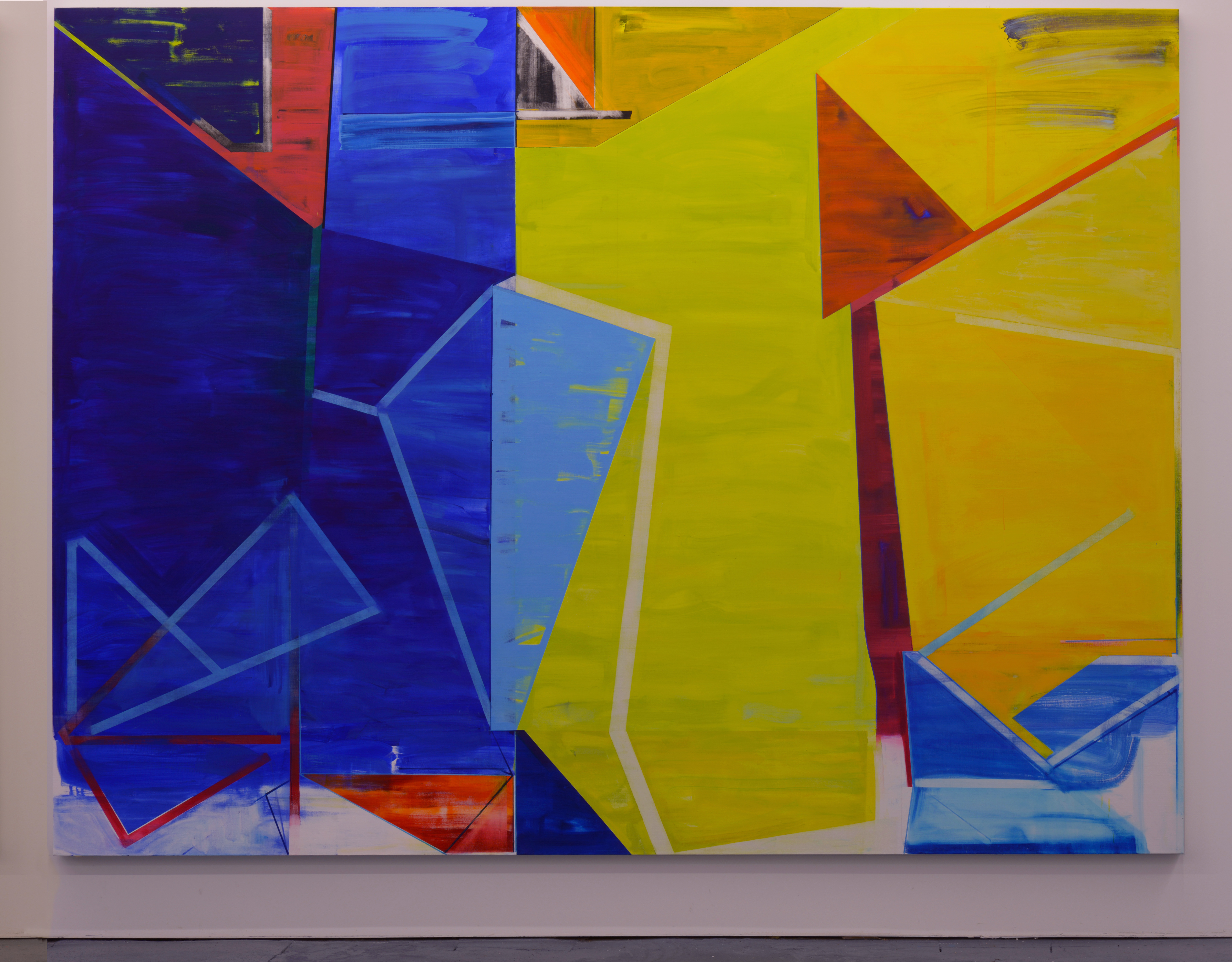 The Speed of Color in Warren Rosser’s Unexpected Consequences

Warren Rosser’s prolific practice in the technology of paint is again realized for his recent exhibition, Unexpected Consequences at Haw Contemporary Crossroads. Rosser has opened up a parallel practice, a two-way conversation, existing through materiality and adaptability. Following a recent hand surgery and retirement as Kansas City Art Institute’s former painting department chair and William T. Kemper Distinguished professor, Rosser explores the practice of digital manipulation, and conversely its effects on his painting practice.

As described in the Artist Talk led by Rosser in the space of the gallery, big paintings were the goal the last year but the year took another turn after the use of his dominant hand was impossible due to surgery. Amid the skepticism one encounters when approaching a new working perspective, Rosser began churning out his digital works. Rosser describes, “it doesn’t matter the medium, it’s about seeing the process in motion.” Color relies not only on context when immediately observing a painting, but also the way in which material manifests color. Formally, color establishes its context within the parameters of physical material, through pigment, and in the instance of one of Rosser’s parallel practices, digital works. Much like a floppy disk icon representing the ‘save’ function, or the Photoshop ‘canvas’ alluding to the fabric of canvas used traditionally for paint, color establishes its memory across function and time.

Color, when simulated on a computer screen, impacts the speed in which a narrative is created and ultimately read, redefining experience and perception entirely. Whether that be scrolling through a ‘manila folder’ of images, rather than flipping through a file of images printed on paper, the reading and timing adjust until the latter is lost. In the instance of color on a computer monitor, much of the color on a screen is formed through a CMYK process especially when printed a subtractive method of mixing is typical. This process differs from the additive demand of pigment. In Unexpected Consequences, Warren Rosser uncovers the speed of color and its potentials on compositional elements.

Adjustability appears to be an undercurrent of Rosser’s practice, not only in process but also circumstance. There was another incident where Rosser had a concussion in 1998. “It was a pretty serious concussion that affected my balance. I was making large wooden structures at the time, and I didn’t trust myself working on the table saw and with industrial equipment, and I hadn’t painted for a number of years. Maybe the bang in my head brought it to the front.” Following the concussion, Rosser started painting again, shifting from three-dimensional work back into two-dimensional work. “Circumstances to a large extent can determine what is available to you, and what you feel comfortable doing.”

Switching dimensions freed Rosser from expectations. He started a few paintings that he describes as first not making sense. “It wasn’t what I was trying to do, it was how I was trying to do it. I was using brushes, and there was still this muscle memory, and I didn’t want to do that. That’s when I changed the tools, I started using squeegees, and started stretching on the floor so it could become an arena.” The paintings resulted in his Slippage series. The sculptural structures Rosser was building became embedded in the painting language. The paintings became about movement and sequence; the divisions and successive forms influenced by three-dimensional space. “Changing dimensions really changed procedures, but really, the critical thinking is still the same. You’re just adjusting to a new set of materials.”

Edge and color are two elements paramount to Rosser’s practice. Much like Josef Albers’ monochromatic prints in contrast to his theoretical practice of color, the tension of edge and color is Rosser’s uniquely formed narrative between colore and disegno. The edges in Rosser’s recent paintings become passages or glitches, resulting in striking and inspective compositions constantly in flux. Recalling Rosser’s series Fictive Monuments from 2012, the paintings formed structures with sharpened black edges. The compositions in this series could not exist in our reality of gravity, while the planes were opaquely solidified, but denied the viewer’s attempt to find a non-fictive formation from the definite lines. The neutral planes reinforce the low-chroma, gray, day-to-day realities, creating an entrance into the familiar space of the painting. 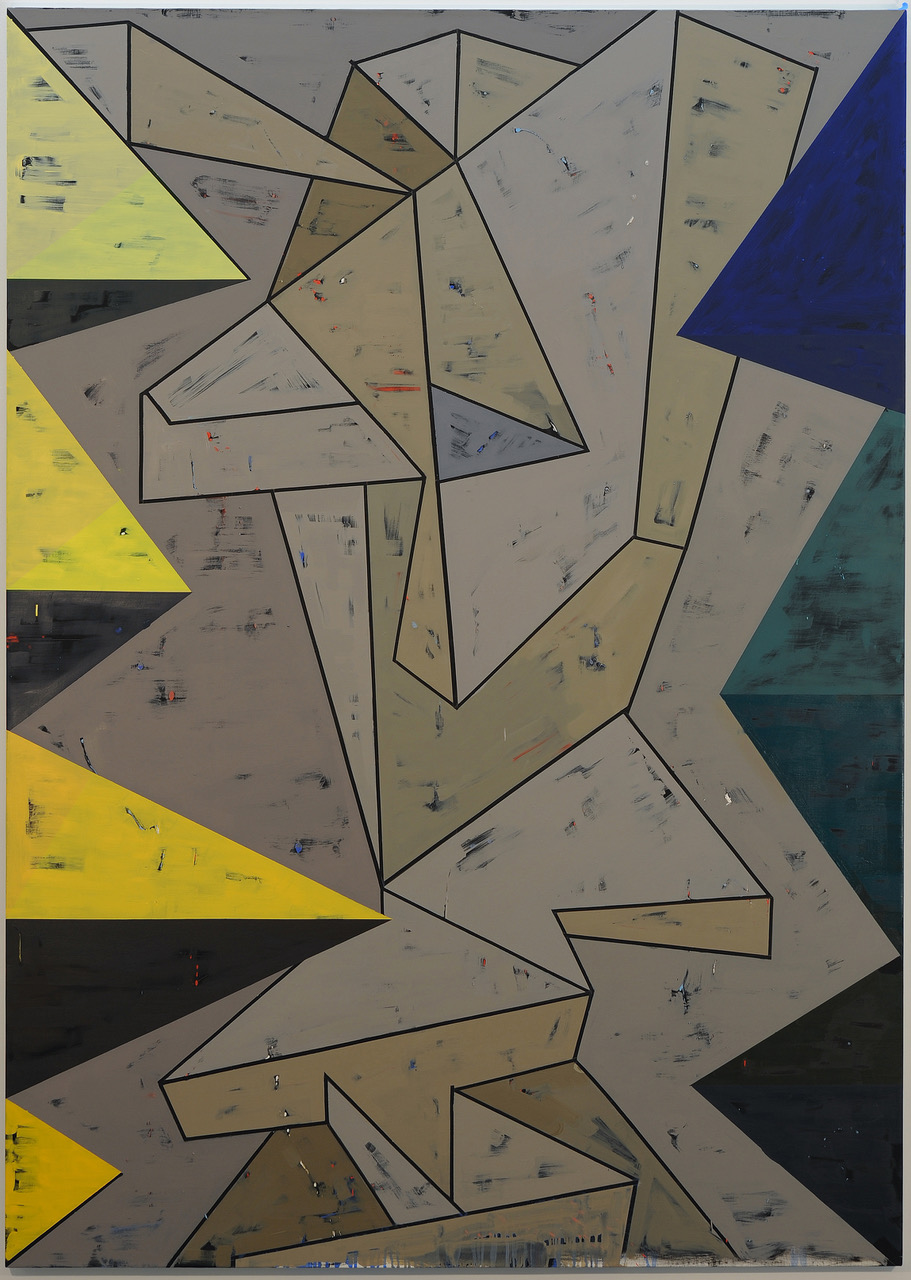 Looking at Warren’s digital prints feels as though one is looking at his oil paintings through glass; the speed and clarity of the layers create a translucency. Rosser has found in his digital work that he doesn’t need to wait for the paint to dry as opposed to working with opacity embedded in pigment. Rosser describes wiping off more paint than leaving on the canvas. The struggle with physical pigment is eliminated in the digital process, where opacity and transparency have a level of control, equal to that of taking samples of digital color swatches or controlling – removing or adding ‘layers’. Though, Rosser is not interested in complicating the process, and treats his digital work with a rather similar command and set of tools as his oil paintings. The thin substrates of mounted paper float off of the wall intending to reveal this thinness of surface to the viewer. In terms of sequence and flipping of composition in Series A, B, C, he believes it a familiar territory from his printmaking experience. The read of the works could also be partially informed by the subtractive color processes of the printer. Rosser says he would like to begin his next six paintings with a more watercolor-like quality, exploring how his “digital work pushed into deeper space more rapidly.”

The digital work is a new language to Rosser. He didn’t want the pieces to feel like surrogate paintings. “When the digital work is printed, it has a presence and a scale. When it’s on a screen, it’s nothing.” Composed of several planes and a sharp diagonal, Both Sides, a large 90 x 120 inch oil painting has a kind of spectral color-mark akin to a galactic space fragmenting and disappearing into potentially never-ending dimensions; the erratic shift coming from splayed color. Color at its core is expansive, acting as a representation of region, sky and landscape, or of time — particularly with the technology available at a period of time. There is an implied narrative within Both Sides, where the title and compositional elements suggest another world, or reality on the other side of the painting formed by the defining diagonal that drops into the void closest to the ground of the painting. 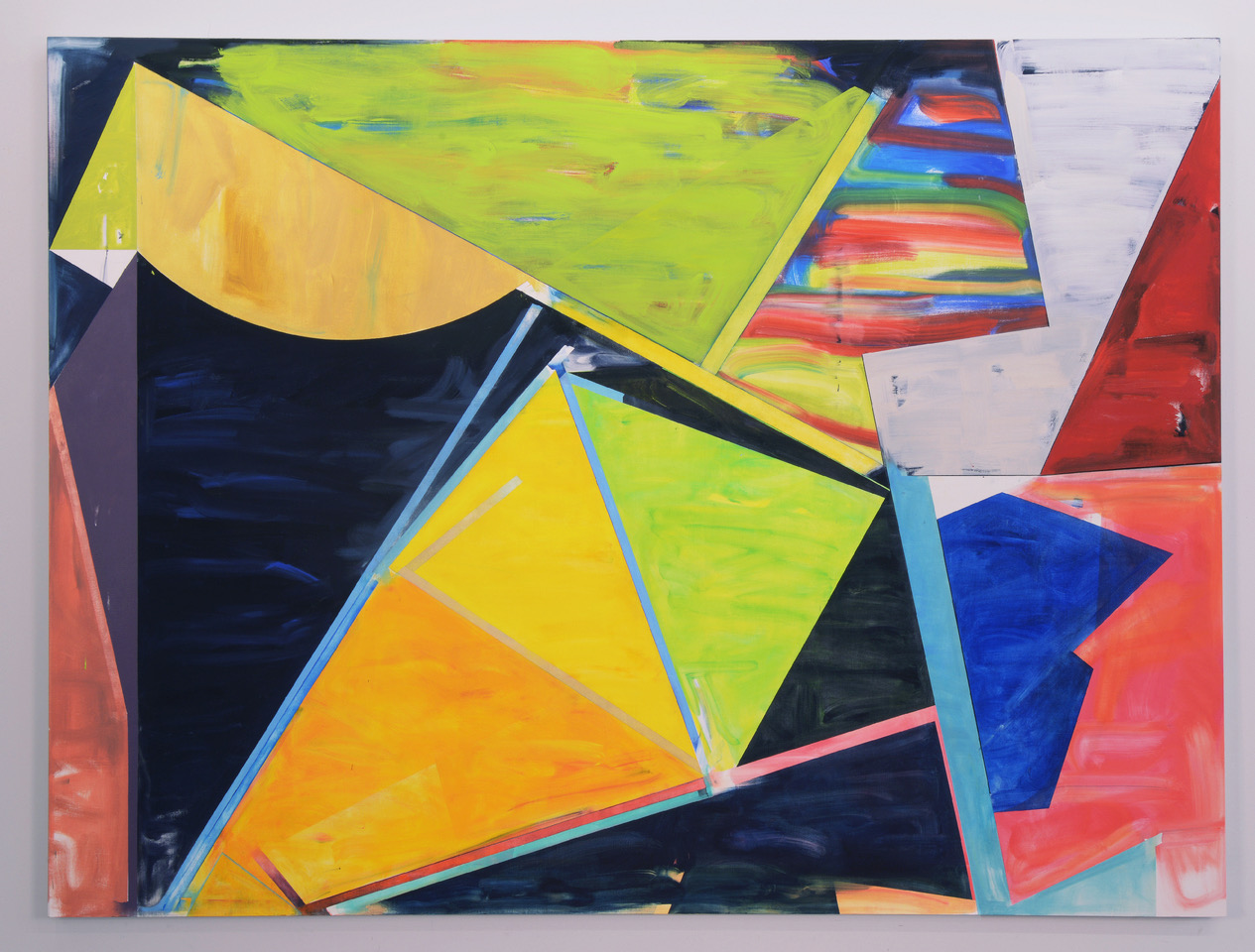 Rosser’s shift across languages reveal time as a construct. Through layers and through observational adjustment Rosser reveals time as a material part of his vocabulary. His recent digital work serves this contextualization of color through an arrangement interspersed with digital media and oil paintings in Unexpected Consequences. “Each painting starts in a way from scratch.” Rosser’s astute definitions form in part from his visual language moving across platforms, defining his parameters within fluctuations of formal elements, making him a deeply refined communicator.

Unexpected Consequences can be viewed at Haw Contemporary Crossroads until January 16, 2019. See it Wednesday this week from 12 – 6pm during the gallery open hours at 19 W 19th St, KCMO 64108.